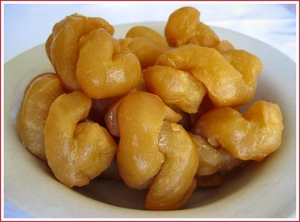 Just like comparisons, lists are odious. As soon as you make a list, you set yourself up to be disagreed with, shouted down, corrected and generally berated for what you included – and for what you left out. It’s a lose-lose situation! But when you are as list-obsessed as I am, you go ahead and make the list anyway. After all, you are talking to the woman whose favourite book for most of the 80s was the Book of Lists.

Cast your minds back about to the blogosphere about 18 months or so ago when there was a list dong the rounds called the Omnivore’s 100. Somebody had bravely taken it upon himself to put together and publicly share a list of the 100 things that he thought every omnivorous foodie should try at least once. Of course, it took all of 5 minutes for people to start pulling the list apart: it was too American (who else eats S’mores?); not vegetarian enough (umm… omnivore…!); not ethnic enough – you get the picture. Soon, every man and his dog was putting together a top 100 list and I toyed briefly with putting together a South African one. Sadly, I never got round to it… until now.

My list is, of course, purely subjective and I’m not expecting every other South African to agree with my choices.  But if you are heading for South Africa any time soon, whether to attend the 2010 FIFA Football World Cup or for any other reason, you could do a lot worse than trying the things on this list to get an idea of the diversity of the country’s cuisine.  Bon appetit!

Phew!  And so we’ve eaten our way through the country’s provinces and history, from the sublime to the ridiculous!  I hope that visitors get to try even a small number of these items – there certainly is variety in there.  If you think there’s anything I’ve left out or should have left out, leave me a comment – I’d love to hear what you think.

This post is part of a new series for 2010 called Sundays in South Africa.  As the entire football-conscious world knows by now, the FIFA World Cup 2010 will be taking place for the first time ever on African soil – in my home country of South Africa!  I can’t tell you how proud this makes me, or how good it is to see that all the stadiums that the naysayers said would never be built on time standing tall and proud and beautiful.  The country is, of course, anticipating a huge surge in visitors and I know that many people will see the cup as a reason to visit a country they have long been meaning to visit, and use the tournament as a jumping-off point for visiting other, non-football South African destinations. With this in mind, as well as my backlog of posts about my South African trips, I will be trying to post a review of somewhere South African, or a South African recipe, every Sunday in the run-up to the tournament.  I can’t pretend it is going to be a comprehensive guide to South Africa – but it will certainly be enough to give you some ideas!  Click here for previous posts in the series.

« Saturday Snapshots #76
Between Hemispheres – a new blogbaby is born! »