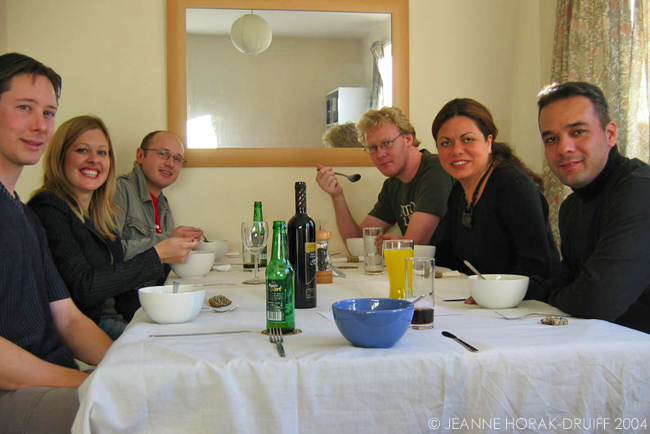 As I mentioned in a previous post, a couple of weeks ago I hosted a lunch at home as a kind of reunion of our fellow-Beerfest attendees.  Out group were pretty varied in nationality – Australian, New Zealand, Mexican and (of course!) South African – so we decided it might be fun to invite each other over to try our respective cuisines.  Seeing as I can’t help myself, I volunteered to be first which meant that it turned into the “South African Traditional Beerfest Reunion Lunch 2004” – quite a mouthful!  I had the usual week or two agonising about the menu.  As I have said before, it is tricky to make the stuff you’d make at home, purely because the ingredients are hard to come by over here.  A smoked snoek pate is a bit tricky when there’s no smoked snoek available, and clearly Tesco does not carry a kudu leg roast.  The other consideration was the amount of work involved for me – there were to be five guests plus Nick and I, so I was looking at catering for 7 in my minuscule and woefully under-equipped kitchen.  In summer this would be a lot easier – we do a braai (BBQ) and everyone is happy (especially me, as Nick does most of the cooking and there are almost no pots and pans to wash!).  But in winter, whatever we eat has to come out of the kitchen and there was no way I was frying multiple coils of boerewors in my one frying pan or making fiddly individual starters.  So my choice of menu was informed by a) lack of South African raw ingredients; b) ease of preparation and c) genuine South Africannness.

The menu that I came up with was a mix of the traditional and the slightly off-beat – I mean, I very much doubt that the Voortrekkers were dining on avocado soup – but the overall meal was very much South African.  I also laid the table using my beaded Zulu coasters and serviette rings to add another touch of home.  The menu was duly typed and by the time the guests arrived, there were copies lying on the table for their perusal both in English and Afrikaans – let me tell you what the menu was before I go into detail:

OK, some explanations.  Brandy and Coke is something of a national institution among a certain stratum (and age group!) of the South African population.  I mean, I would rather die of dehydration than order a brandy and Coke in a bar, but my father has had a brandy and before dinner Coke every Saturday night since I can remember.  So in that sense it’s a generational thing.  But later I dated somebody who hung out with a lot of policemen and I swear that off duty, this was their favourite combination.  Talk about living up to the cliché.  Anyway, it is probably the most quintessentially South African combination you will find – in fact, in South Africa you usually drink a particular type of brandy with your Coke, and that’s Klipdrift.  So if you should ever find yourself in a South African bar and want to blend in with the locals, just ask for a “Klippies and Coke”! 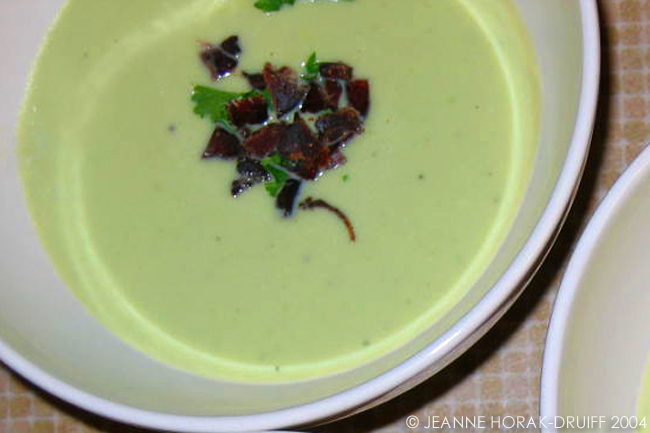 As for the rest of the meal, the avocado and biltong soup is one of my all-time favourite recipes – dead easy and always impressive because people labour under the misapprehension that avocado soup has to be chilled, and this one isn’t.  I learnt this recipe from my good friend Peter and I always think of it as Peter’s avocado soup – and I think it deserves a post of its own, so recipe will follow in the next post.  The main course, bobotie, is an old favourite of mine and something on which I’ve posted on previously.  Suffice to say herethat it is a traditional Cape dish heavily influenced by the Malay slaves who were brought to the Cape by Dutch settlers, and consists mainly of curried mince baked under an egg custard decorated with bay leaves. 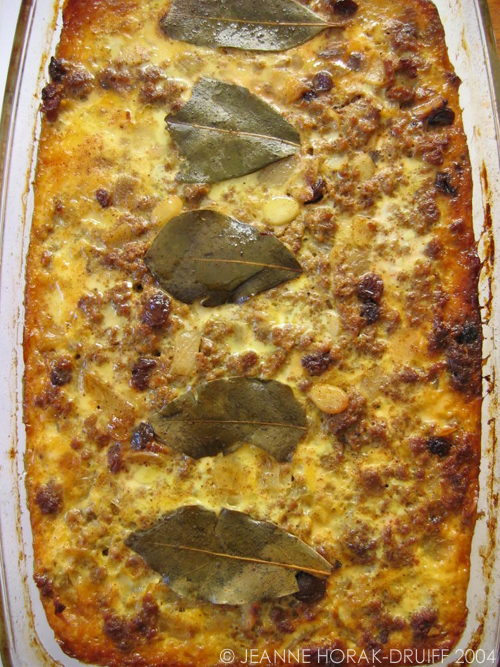 The butternut was peeled, seeded, chopped, steamed and mashed with a little sugar and a lot of cinnamon and the rice was boiled with half a teaspoon of turmeric and a handful of sultanas.  Pretty much all of the main course showcased the South African love of mixing sweet tastes with savoury, both in the liberal use of sultanas in the meat and rice and in the cinnamon-sugar butternut – in fact, my father refuses to nibble on any kind of squash or pumpkin unless it has been liberally doused with butter and cinnamon sugar! What interested me most about the meal was the reaction of our two Mexican friends.  Now you wouldn’t think that there would be much commonality between the cuisine of Mexico and South Africa… think again.  They were interested in the avocado soup as they eat a lot of avocados (think guacamole!).  They were intrigued by the spiced mince dish as there is plenty of spiced mince in Mexican cuisine.  But the oddest coincidence was the drink – they were amazed that we were serving brandy and coke because (according to them) it is practically a national institution in Mexico!  Just goes to show – nothing new under the sun! 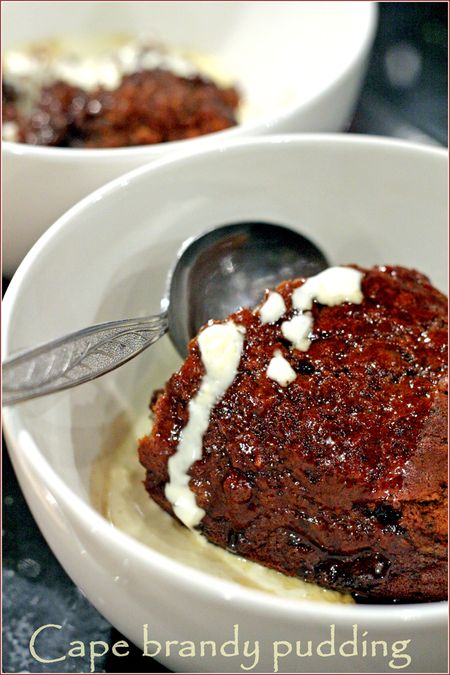 The Cape brandy pudding (also known as tipsy tart, despite bearing no resemblance to a tart!) is a dessert that I have often eaten but had never actually attempted to make it myself.  The recipe that I used is, as I recall, from my friend Paul (he of the butternut soup!) and I figured that as we already had brandy in the house for the pre-lunch drinks, this was as good as any a time to try my hand at it.  This is a baked pudding with dates and nuts which is soaked in a brandy-laced syrup after baking – what could possibly be wrong with that?? It turned out to be dead easy to make and was absolutely devoured by the guests – I have never seen such clean dessert dishes in my life! It’s a perfect warming winter dessert that you could easily serve as an alternative to traditional Christmas pudding – find my recipe for it here.

What would YOU cook if you had to make a 3-course meal for guests that epitomised your homeland? Please tell me in the comments 🙂