You are here: Home / Recipes / Braai/Barbecue / South African chakalaka by the Thames – Scenes from a braai III 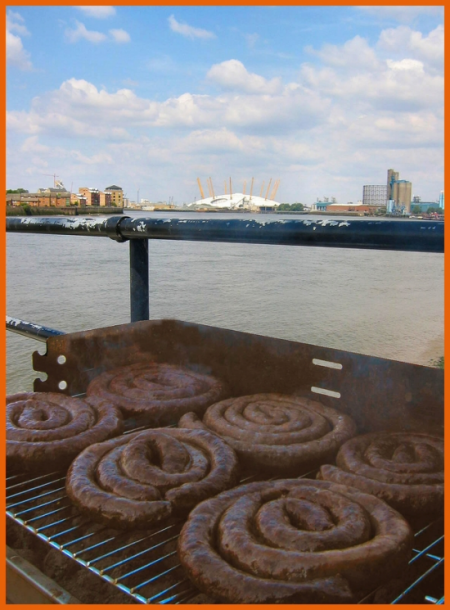 Well, you’ve heard about the stuffed pork fillets on Friday night.  You’ve heard about the lamb sosaties on Saturday night.  Time now to conclude this series of weekend braais/barbecues with this past Sunday’s contribution. As I may have mentioned in the past, my other half Nick rowed competitively for many years.  In fact, I don’t think I saw him for much of the early part of our marriage as he was always either on the water, driving to a regatta, or in the gym!  Luckily, sanity prevailed about a year ago and he has since scaled back his rowing to a purely social level.  But the one thing he does still get involved with every year is the annual fundraising braai at his rowing club.  The club has an absolutely spectacular setting on the Thames at Greenwich – right on the water, with a deck which is lapped by the incoming tide – that’s how up close and personal you get to the river! Your views include the impressive skyline of Canary Wharf directly ahead, the Millennium Dome to your right, and a perfect sunset gazing upstream to your left.

It must be said that he has always done a great job – past successes have included his famous stuffed beef fillet, chicken sundowners (wings stretched out and then skewered along their length, marinaded and braaied), and whole chickens with a curried apple stuffing.  And there are always 20+ people, so it takes quite a bit of skill to get everything cooked and everyone fed at approximately the same time, given the limited braaing facilities at the club.  And yet, every year he pulls it off.  Like I have said before, he’s a keeper 😉 But I think the reason why we keep returning is that the This year he decided that, in order to save his own sanity, he would make only one simple dish (instead of trying to present a few South African specialities as he has in the past) – and what can be simpler than… boerie rolls!! Method:  Find a deck with a great view of the Thames, prepare a braai fire, slap some coils of boerewors on the braai (see picture above) and when cooked, serve in 6-inch lengths on hot dog rolls!

But that would have been TOO simple, and most of those attending the braai are already familiar with boerewors, following on Nick’s prior culinary mission work amongst the club members 😉  So he had to spice things up a little, and the idea he hit upon for this purpose was chakalaka.  Now chakalaka is an odd creature in terms of parentage, not to mention etymology – I can find no info on that score. (The closest I have come is finding a recipe for chakcuaca which is apparently a Tunisian “warm salad” containing garlic, onions, peppers and tomatoes.)  There is definitely an middle-Eastern influence in that curry, ginger and chiles are essential ingredients – in this sense it has a lot in common with sambals and chutneys.  However, it is also likely that chakalaka was a favourite of (predominantly black) workers on the mines around Johannesburg, who added their own twist by making tinned baked beans a regular addition to the recipe (it made for a quick, cheap and nourishing meal).  The mineworkers belonged to many of the various tribes of Southern Africa (Shona, Venda, Zulu, Sotho and Xhosa, to name but a few) and when they went on home to their far-flung villages, they would take this new Big City chakalaka recipe with them, thus establishing it as a firm favourite throughout the country. Don’t think for a minute, though, that there is agreement on what goes into the dish, how it should be served, or as what it should be classified  (Brian from Kitsch ‘n Zinc has a great post about the debate).  Suffice to say that the basic ingredients always include onions, tomatoes, bell peppers, garlic, chillies and curry powder (and almost always baked beans and grated carrot).  However, other recipes may include fresh coriander/cilantro leaves, chunks of cauliflower or sliced courgettes (making it more of an atchar).  The bottom line is that you can play around rather a lot with the recipe, depending on what’s in your cupboard and vegetable rack, and that’s always a good thing in my book.  As for serving, it can be served hot or cold, depending on whether you are using it as a relish or a more integral part of the meal.  Which brings me neatly to the last dilemma – its classification.  It has variously been called a soup, a vegetable side dish, a relish, a salad, a ketchup, or an integral part of the main meal (and plenty more besides!). It can be served on its own, with a meat stew, on bread, on potatoes, on rice, on boiled samp (crushed dried maize), on a stiff polenta-like porridge, or (as we did) as a relish on boerewors rolls on the banks of the Thames with a couple of good friends 😉

It is possible to buy tinned chakalaka in every supermarket in South Africa (All Gold makes both a mild ‘n spicy and a hot version; and Koo makes mild, spicy and extra hot variations as well as extra hot with beans, one with butternut squash and one with sweetcorn), and almost all South African shops around the world.  But Nick decided to go the artisanal route (!) and make his own from scratch.  I have no idea what recipe he used – he cobbled something together from various sources on the net, so the recipe I have used below is Brian‘s.  Nick’s version called for baked beans and grated carrot, but not for “extra” vegetables like courgettes or cauliflower (he left the coriander out too, meaning that there was a bunch for me to use in my tabbouleh!).  He also went quite easy on the chiles and the curry powder, both to spare my palate and so as not to frighten the paying guests, but you can crank up the heat as much as you like by playing with the amount and type of both.  I had never been a fan of chakalaka, fearing its legendary curry-chile punch but I have to say that what Nick created was rather heavenly – tasting of fresh, zingy ingredients and looking colourful and enticing.  It was perfect as a relish on the boerie rolls and despite our hopes that we would get to take home some of the chakalaka for ourselves, the whole pot was polished off in no time at all. 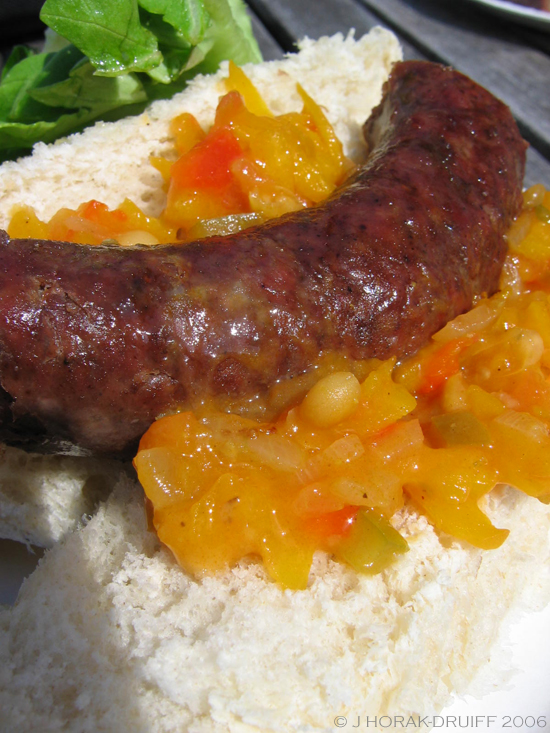 It’s a bit fiddly to make, so rather make lots (we made a double batch) and freeze what you don’t use.   The flavours improve if it is kept in the fridge overnight and reheated, and then you can use it on almost anything – a sauce for fish fillets; a dip with pita bread; a relish with cold meats and cheese; mixed with chunks of butternut, courgette and broccolli and baked with some cheese on top; on couscous; on baked potatoes; or as a stuffing for either butternut or bell peppers.  A rainbow of possibilities.

20 g chopped chiles (choose your type according to how much heat you like!)

Fry the ginger, garlic, chillies and onions in the oil. Add the curry powder of your choice and mix well.

Add the tomatoes and cook over medium heat for 10 mins until they start to break down.  Then add the peppers and carrots and cook for a further 10 minutes.

Add baked beans and cook until the mixture reduces and thickens slightly.  You can get away with cooking the mixture for only 5-10 minutes at this stage, but the longer you can simmer it, the more complex and melded the flavours will be.

Remove from heat and add coriander.  Check seasoning and add salt and pepper if necessary.

Lamb sosaties with a view – Scenes from a braai II