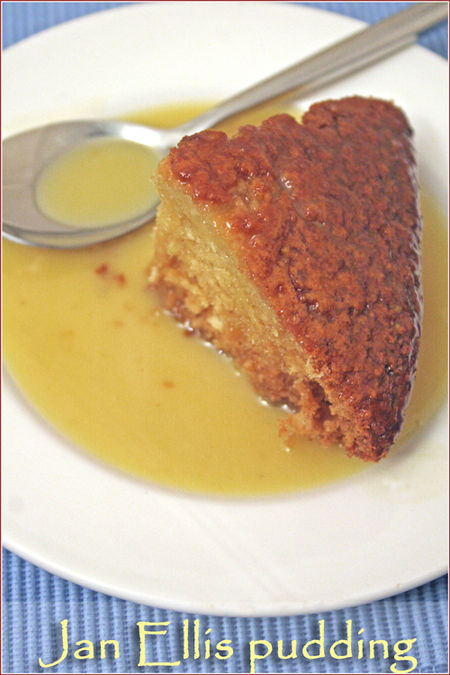 And no, I don’t mean the weird English concept of puddings which can include savouries like Yorkshire pudding.  I mean sponge-cakey puddings baked in the oven and usually served warm with some sort of sauce or syrup.

There’s nothing glamorous or sexy about them, and they don’t require any sort of expensive or exotic ingredients.  Mostly, they originated in farm kitchens where the lady of the house had to whip up a pudding from what she had on hand – flour, eggs, butter, sugar and maybe a jam of some sort.  Those redoubtable housewives had a pudding for every occasion, as I discovered in my copy of the Oranje Kook-, Koek- en Resepteboek of 1918, written by the mysterious “Mrs D.J.H.”.

There is also a cluster of puddings which are so similar that some sources describe them as being one and the same pudding.  These are malva poeding (literally mallow pudding), bruinpoeding (brown pudding) and Jan Ellis poeding. All consist of some combination of flour, sugar, eggs, milk, apricot jam and some sort of raising agent, and after the pudding is baked a syrup is poured over it.  However, after combing various sources it appears to me that there are some small distinguishing features.  Malva pudding contains vinegar whereas Jan Ellis pudding apparently does not.  Brown pudding has a syrup that does not contain cream, whereas both malva and Jan Ellis pudding have a creamy syrup.  Small differences, I know, but I’m a stickler for detail 😉  So I am taking the view that Jan Ellis pudding is a discrete entity, but is part of a close-knit pudding family.

Jan Ellis was a well-known Springbok rugby player in the 1960s and 70s, and held the record for most-capped Springbok player of all time when he retired (38 caps).  Legend has it that this was his favourite pudding and to this day it bears his name.  I have to say that the man had good taste.  The pudding itself is a fairly dry, cake-like affair that baked to a nice almost crispy crust.  Still, I was a little dubious about the texture… until I poured generous amounts of the creamy, caramelly syrup over it.  Oh my.  It’s rib-sticking, warming comfort food at its very best and the pudding just soaks up the syrup like a sponge – even my desert-avoiding husband liked it!

I have to confess, though, that I could not leave well alone.  I figured that the traditional recipe (I used one from Pieter-Jasie) as it stood needed a little something to take the edge off all that unadulterated sweetness, and for some reason nutmeg sprang to mind.  I also happened to have a tablespoon or so of grated orange zest left over from another recipe, so into the syrup that went.  The end result was wonderful enough to make me wonder why I had spent so many years faffing about with creme brulees, mousses and crepes – this is pudding as pudding is meant to be.  And I’m immensely proud to claim this piece of pudding heritage as my own 🙂

Looking for more South african desserts? You will love my:

Dissolve the baking soda in the milk.  Mix all the other ingredients together well, then add the milk and mix well until smooth.  Pour into a baking dish and bake for 30-40 minutes at 180C or until a skewer comes out clean.

Plase all the ingredients for the syrup in a small saucepan and bring to the boil over medium heat.  Serve each portion of pudding with a generous helping of syrup and some custard.

I am submitting this as my entry for Waiter, There’s Something in My… this month.  Host Johanna has declared the theme to be hot puddings, and they don’t get much better than this hot pud 🙂 You still have a few days to submit your hot puddings to Johanna – so hurry along!