You are here: Home / NaBloPoMo 2007 / Waiter, there’s something in my… melktert! 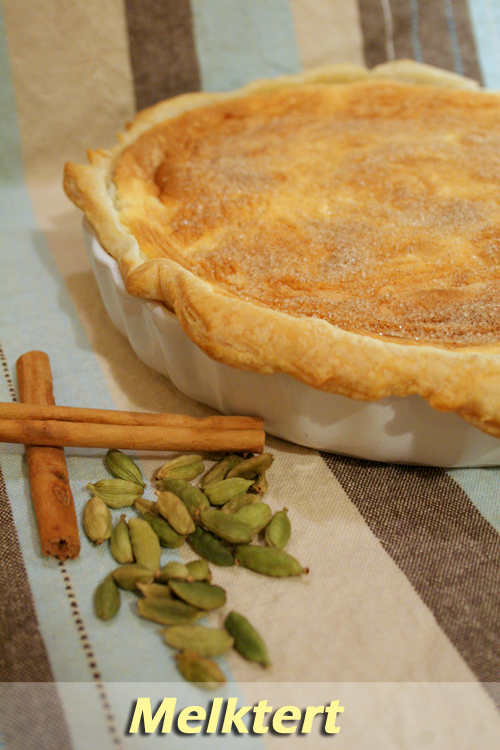 Do you know the feeling when you know something is part of your heritage and you know you should like it… but you just don’t?  Like my father growing up in the Afrikaner heartland of the Orange Free State province, but not liking braais.  Or a Scotsman who can’t stand haggis.  Or me, growing up in an Afrikaner household in South Africa and not really caring for melktert.

And I have to say, I could have picked something easier to avoid.

Melktert (literally “milk tart”) is one of those baked items (like koeksusters) that you really struggle to get away from in South Africa.  Every school cake sale featured milk tarts, every home industry bakery is full of them, and everybody’s mom/sister/aunty/gran had their own secret recipe.  But when a friend of my mom’s would come round for tea and say she had brough milk tart, my heart would sink.  I wanted coconut tart, apple tart, fridge tart – just something with some taste!  You see, milk tart is basically a baked custard tart and I’ve never been a fan of custard – just too bland for me.  So my relationship with milk tart was kind of doomed from the start.

Melktert is one of the dishes that we inherited from the Dutch settlers who colonised the Cape in the 1600s.  I had initially wondered whether melktert was not borrowed from the Portuguese who were the first Europeans to land at the Cape and continue to be a thriving community in South Africa, because the Portuguese pastel de nata is very similar to a mini melktert. But greater minds than mine seem to disagree and insist that the melktert we still eat today is inherited from the Mediaeval Dutch cuisine.

The first mention of a similar dish in Dutch cuisine is in fact in the first cookbook published in Dutch by Thomas Van der Noot in 1510.  Apparently, the Mediaeval diet in Europe was heavily influenced by religious restrictions.  The church stipulated that feast days should alternate with fast days and so in most of Europe Wednesdays, Fridays and sometimes Saturdays (as well as days such as Lent and Advent) were fast days.  On fast days, meat and animal products like milk, cheese and eggs were not allowed.  To comply with these rules but still manage to have dessert, a porridge would be made on feast days consisting of almond milk, oil, cake flour, rice flour, ginger and cinnamon.  Later, when the fast day rules were relaxed, milk and eggs were substituted for the almond milk (almond essence was added to compensate for the loss of flavour).  Van der Noot apparently also included a “modern” recipe for melktert which included extra eggs and very little flour, bringing it almost entirely in line with the recipe we know today.

The one I never liked. 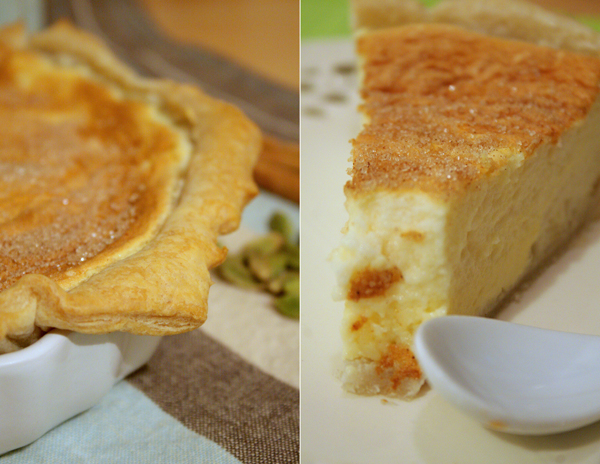 But then something happened.  On my visit to Johannesburg earlier this year, I got together with friends for a braai and Bronwyn volunteered to bring a milk tart.  She stressed that she would not be slaving over a hot stove making it, but did mention that she had found a shop that does excellent milk tarts.  Hmmm.  Unconvinced.  So after dinner, the milk tart was brought out and I cut myself a small piece, not exactly filled with hope.  But… what’s this?  Firstly, the custard filling was actually wobbly, like a panacotta, rather than like the foam mattress-texture that I recall from my youth.  And the crust wasn’t the stodgy shortcrust I remembered, but puff pastry!  And far from being a disappointment, the taste merely confirmed what my eyes had already told me – a delicate wobbly custard filling in a featherlight crust with a generous dusting of cinnamon.  Perfect!  And so I began a thaw in my attitude towards milk tart.

Given this month’s saucy WTSIM theme of topless tarts, I really had no other option than to try my hand at milk tart to see if I could recreate milk tart as-the-universe-originally-intended.  The traditional flavouring is cinnamon, but I figured if we were infusing the milk, we might as well make things a bit more interesting and add some cardamom.  And besides – who hasn’t yearned to spice up a staid family dessert into a sexy topless tart?! 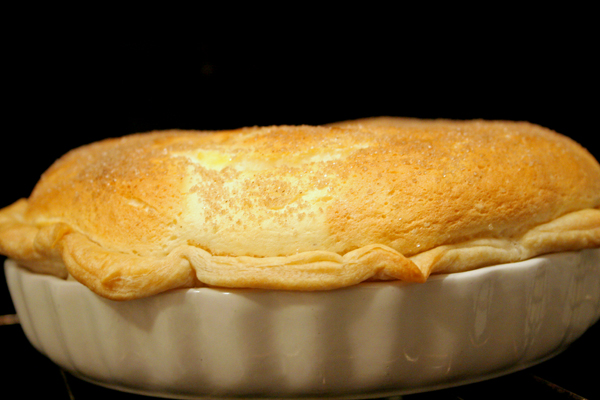 Pre-heat the oven to 200C.  Line a 20cm diameter fluted pie dish with the puff pastry, leaving the edges raggedy and hanging over the edge of the dish.

Bring the milk to a slow boil in a medium saucepan, then add the butter, salt, cinnamon stick and cardamom pod.

Combine the custard powder, cornflour and cake flour.  Add the cold milk and make a paste.  Stir a little of the hot milk into the paste to thin it, then stir the custard paste into the hot milk in the saucepan.  Make sure there are no lumps in the paste – and don’t panic too much if there are some lumps in the saucepan once you’ve added the custard – just make sure you stir vigorously and continuously to get them to dissolve.  Add 2 Tbsp of the sugar and stir continuously.  (I cheated a little and whisked the custard with a wire whisk to keep it smooth!)  When the custard thickens, remove it from the heat and discard the cinnamon and cardamom.

Beat the egg whites until stiff, then beat in the remaining sugar gradually and set aside.  Beat the yolks slightly and then add about 2 Tbsp of the warm custard mix to the yolks and mix well.

Stir the yolk mix into the custard saucepan and add the almond essence (if using).  Gently fold in the egg whites.

Pour into the prepared pie dish, sprinkle with cinnamon sugar and bake at 200C for 10 minutes.  Then turn the heat down to 175C and bake for a further 10-15 mins, until puffed up and golden.

Allow to cool on a wire rack and serve in slices with coffee.

NOTES:  After much thought and some reading, I decided that the milk tart I had in Johannesburg was probably made by baking the pastry shell blind, making the custard in a separate put, and then scooping the thickened custard into the shell – no baking.  But seeing as I could not find a recipe for this method and I’m not confident of my custard-making skills, I opted for the recipe above which was adapted from a couple I found on RecipZaar.

What attracted me to it was the whipped egg-whites – no way could it be stodgy with all that egg white in it – and I was right.  It’s not a difficult recipe at all, but takes a bit of time as each constituent part needs to be worked on – and it does dirty a lot of bowls/pots!  The addition of the cardamom was an inspiration, even if I say so myself, and I will definitely be repeating this as the taste is marvellous.  I also loved the taste of the custard before I added the eggs.  The flavour of the spices came through very strongly, and I would happily make flavoured custard like this to have with fruit desserts in future.

The finished product not only looked lovely and puffed up in the oven like a soufflé (see above!), but retained that lovely eggy wobbliness even after it had sunk down to normal proportions.  It is light and very moreish and deliciously spiced.  Definitely a keeper!