Pop quiz:  what do all the following dishes have in common?

They do not seem to be linked by nationality or even broad geographic region; nor does the link seem to be ingredient-related.  They do not share an alliterative first letter; nor do they rhyme.  Baffled yet?  The answer is that they are all dishes that are named after the vessel in which they were originally cooked.  A French marmite is a traditional crockery casserole dish famed for its pot-bellied shape, usually used for stews or stocks. Marmite spread was originally sold in little miniature marmites  and the current pot-bellied bottle is a nod to its history.  A tagine is the traditional shallow clay cooking pot of North Africa with its distinctive domed lid – or the stew that is slow-cooked inside it. A balti is a small two-handled steel bowl and it has given its name to a variety of Indian curries cooked in it. A cassoulet is  french stew named after its traditional cooking vessel, the cassole: a deep, round, earthenware pot with slanting sides. The tian is a Provencal shallow earthenware dish in which a layered vegetable dish (a tian!) is cooked. Which brings us to the potjie (say “poy-key”) – both a South African 3-legged black cast-iron pot as well as the slow cooked layered stews cooked inside it, over an open fire. Three legged pots are not unique to South Africa – presumably they landed here from Europe with the Dutch settlers and travelled inland with the Voortrekkers on their ox wagons.  But the culture and cooking methods that have sprung up around the potjie certainly are unique to the country.  Strictly speaking, the stew that is produced is called a potjiekos (literally “pot food”) and there are numerous local and national potjiekos competitions held in South Africa each year (competition is fierce and recipes closely guarded!). But above all, a potjie is a very sociable way of cooking: because the cooking time is at least 3-6 hours, there is plenty of time for sitting around shooting the breeze with friends and having a few beers. 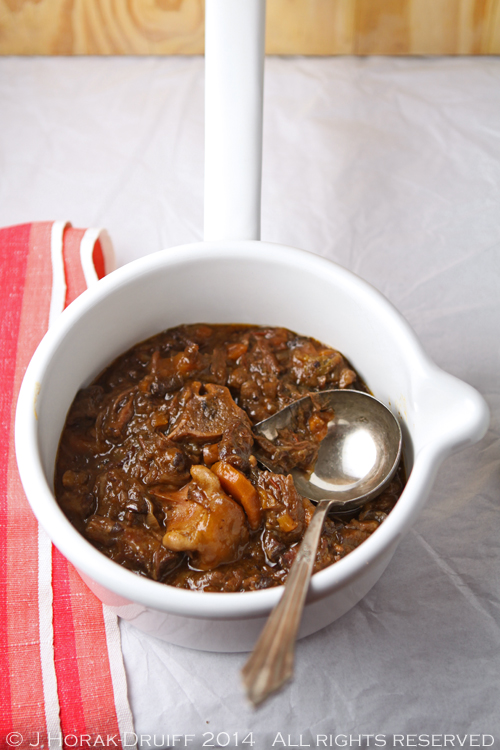 Ingredients in a potjie can vary from red meat to chicken or even seafood, but for the purist it has to be some sort of red meat. In addition, there will be vegetables that need slow cooking (potatoes, carrots, onions and the like) and then vegetables that don’t nee much cooking which can be added towards the end of the cooking process (spinach, mushrooms and the like).  Seasoning and spices are essential, as is the cooking liquid which may range from stock to beer to wine. First, you need to prepare your coals; then the meat has to be seasoned and browned in the base of the pot in a little oil of butter; and then the vegetables are layered on top of the meat in descending order of hardness before the cooking liquid is added.  Then the lid is shut and all you need to do is keep replenishing the coals – stirring is prohibited! The result, even when using the cheapest cuts of meat, is a fragrant one-pot meal of tender meat and vegetables – perfect for sharing with friends.

Over the years, Nick and I have made a variety of potjies but somehow we have not got round to doing one of the classics: the oxtail potjie.  Despite being a staple in my mother’s kitchen, oxtails are relatively hard to come by in this country – none of the big supermarkets seem to sell them near me so you may need to find a proper butcher. Beware though: it is no longer the cheap cut of meat it once was – prices start from about £7 per kilo (and you are paying for a lot of bone…). The good news is that it is quite rich and with some vegetables added into the mix, it goes a long way and it is addictively tasty. We doubled up a very slightly modified version of this recipe from Potjiekos World, omitting the sherry and the cream and the results were excellent, with the meat falling off the bones and a rich, satisfying flavour.  Best of all?  It tasted even better the following night, reheated and served with creamy polenta and French beans! 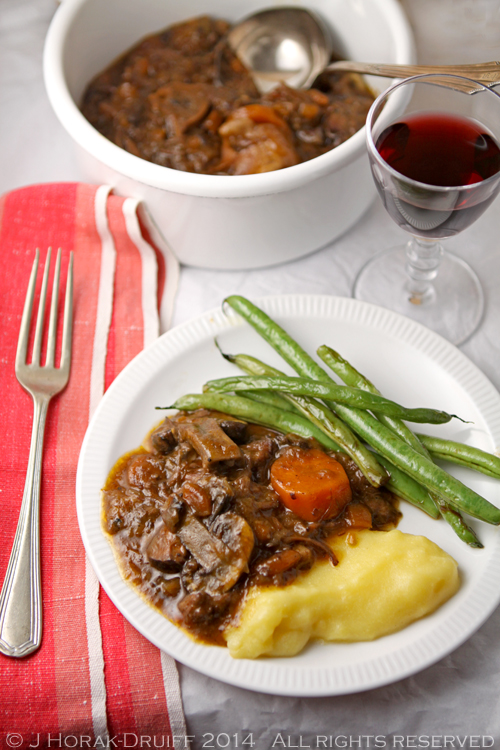 Rosana (who took the initial photo) has also done a fantastic post covering the braai where we served this – well worth a read!

Other oxtail recipes you may enjoy:

My other potjiekos recipes you may enjoy: