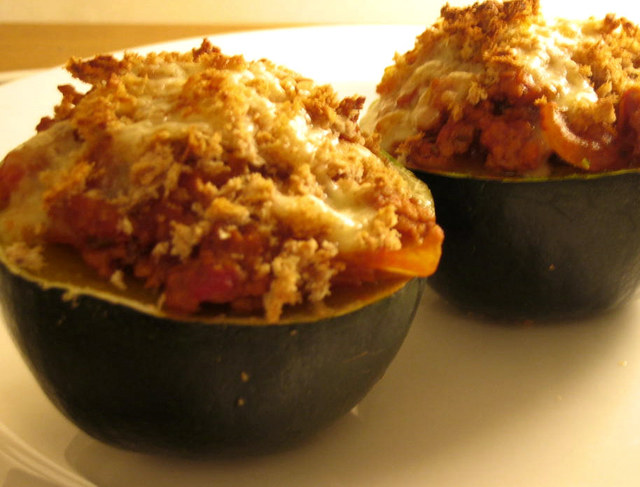 Remember the excitement of a new relationship?  That wonderful time when you’ve just met somebody special and you are just mesmerised by every new fact you discover about them, and how you agonise over the things you do not yet know about them?  Awww, how adorable, he likes science fiction.  OMG, what if he has dirty toenails??!  etc etc ad nauseam.  Well, one of the big questions for me when I meet people (and particularly when I met Nick!) was what will his cooking be like?  In other words, would his “cook to impress meal” be a microwaved ready-meal, beans on toast or something a lot more interesting?  Now I had been to his place before for dinner, before we were actually an item and that time, he and his housemate had done a venison roast – a promising debut, but all the side dishes had been cooked by a friend of theirs, so I still wanted to see what he would do on his own.  In the interim, I hosted a dinner party at my house, for a group of friends that included Nick, and I can say with certainty that the first meal I cooked for him was fresh fish (butter bream in South Africa – heaven knows what it is called in the rest of the world!) served two ways: topped with tomato and onion stew and cheese (also known in my house as pizza fish) and  topped with spinach and feta (also known in my house as spanakopita fish ;-))

And so it came to pass that things progressed and I received a dinner invitation to his house.  By myself!  Oh joy!  Oh rapture!  I turned up at the appointed hour, floating on a cloud of perfume and happiness, not caring by that stage if he fed me Cuppa Soup and two-minute noodles.  But wait:  our boy has an ace up his sleeve!  Once we had chatted and had a glass of wine, we finally sat down to our first dinner a deux and with a flourish he produced… stuffed gem squash.  Clever clever clever.  Not too girly, but definitely a cut above your standard meat-and-potatoes (or, God forbid, beans on toast!).  By this stage, non South Africans are asking what the hell is a gem squash.  Well, let me tell you – it is probably the thing that South Africans abroad crave the most, second only to biltong.   In fact, when my half-sister emigrated to France in the 1970’s she missed gem squash so much that she smuggled a packet of seeds into France wth her and planted them in her garden there, just so that she could have a steady supply.

As I discovered when I arrived in the UK, squashes aren’t that big over here.  OK, so maybe they’ll carve a pumpkin at Halloween, but apart from that, you coudl say that the squash family (including things like butternut, kabocha/acorn and gem squash) have not made it big in the UK.  At first I thought it was a northern/southern hemisphere thing, but in the US, squashes of various descriptions are very widely eaten.  In the end, I think it may be a climate thing.  Squashes are generally like heat and cannot tolerate frost and many types simply don’t grow that easily over here.  Consequently, they have always been viewed as something rather exotic and best avoided by those with conservative palates!  Some of my English friends still view dishes cooked with butternut squash with a huge degree of suspicion and declare them to be “an Antipodean thing”.  But having said that, at least butternut is now available in pretty much every supermarket, while gem squash is available reliably at Waitrose and sporadically other supermarkets.  Hurrah! 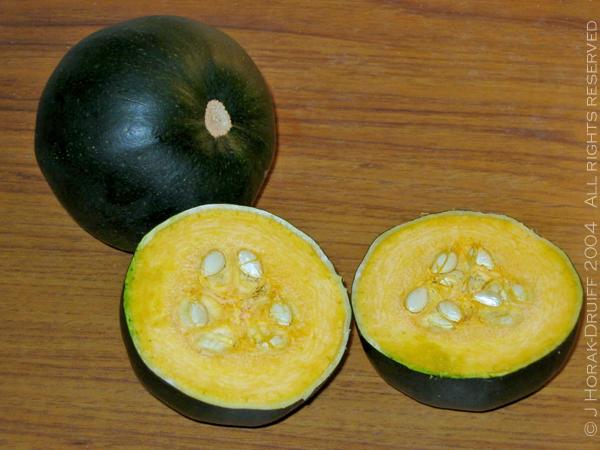 So – on to the technical stuff.  Gem squash originated in Central America and belongs to the botanical genus Cucurbita, which includes melons (!) and can be subdivided into Cucurbita maxima (Hubbard squash and buttercup squash); Cucurbita mixta (cushaw squash); Cucurbita moschata (butternut squash); and Cucurbita pepo to which gem squashes belong, together with most pumpkins, acorn squash, marrows and cucumbers.  More generally, though, squashes are categorised as summer or winter squash, which has little to do with their time of availability, but rather their time of harvesting and degree of maturity at harvesting.  WInter squashes are generally left until the end of summer before they are harvested, making their skin tough and making it possible to store them for consumption at a later date.  Summer squashes, on the other hand, are picked when they are still young and tender.  They need little or no cooking (e.g. zucchini) but don’t keep as well as winter squashes.  Included in this family would also be the wonderful pattypan squash which was a staple food back home but not something I’ve seen generally available in the UK 🙁

Now gem squash falls into the summer squash category, but I must say that the gem squashes vary greatly in terms of how thick their skin is – I guess this is a function of how early or late they were picked.  The ones we get in we get in South Africa (often sold by the roadside in 5 or 10kg bags!! And sooooo cheap!) tend generally to be pretty thick-skinned and once cooked, hold their shape.  Over here, however, they live up to their description and the skin is often soft enough to eat once cooked.  On the other hand, in South Africa we get baby gems – approximately the size of ping-pong balls and cooked in the blink of an eye.  You just eat the whole thing, no mess, no fuss – and they are SO sweet and delicious.  (I think these may be available elsewhere labelled as “8 ball” squashes?).

OK, I hear you ask, that’s all fine and well, but what do you do with a gem squash?  The labels in the supermarkets over here will tell you to peel and quarter the gems, scoop out the seeds and roast with olive oil.  And yes, you can certainly try that.  But personally, if I can avoid peeling a squash then I will!!  Here are some other ideas:

400g lean mince (I have used beef, turkey and pork and all work well)
1 small onion, finely chopped
1 clove of garlic, crushed
about half a tin of chopped tomatoes
a splash each of soy sauce and worcestershire sauce
salt and pepper to taste
a pinch each of basil and thyme
1 slice of bread, crumbed
grated cheese for topping

Prepare and steam the gem squashes as above (one squash per person).

While they are cooking, fry the onion and garlic in a little olive oil until soft.  Add the mince and fry gently until cooked.  Add the chopped tomatoes, the sauces and seasonings – taste to see if anything else is needed.  Chopped chillis can also be added if your taste runs to spicy.

When the meat mixture is heated through, place the gem squash halves on a baking sheet and carefully scoop out the seeds, leaving behind the flesh.  Fill the hollow of half with the meat sauce, sprinkle with grated cheese and top with breadcrumbs.

Grill until the cheese has melted and the crumbs are crisp and golden, then serve with a big green salad and wait for your guest to fall hopelessly in love with you. 😉