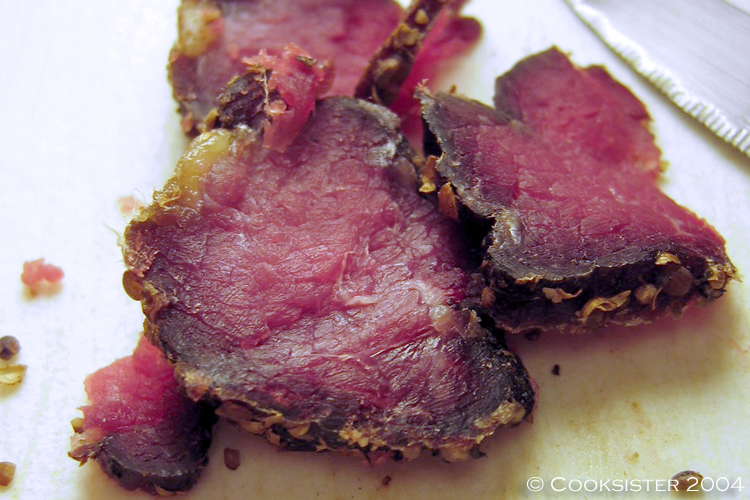 South Africans (and Zimbabweans) have known it for years – and it seems that the rest of the world is finally coming around to our way of thinking. Check out this brief article in today’s Metro newspaper in London:

“Parents trying to soothe their teething babies are turning to air-dried spiced meat. Butcher Henry Viviers can hardly keep up with the demand for his biltong speciality at his shop in Brighton. Most of the demand is coming from expat Zimbabweans but British mothers and fathers are now catching on. ‘When children were teething the first thing we’d give them is a piece of biltong,’ he said. ‘Some English think it’s unhealthy but it’s not.’”

Well, on the topic of the last sentence, I guess I won’t spoil the story for Henry and tell him about my friends who gave their first child Jason a stick of biltong to chew on while he was teething. Jason was sitting on the lawn playing nicely and gumming on his biltong while their Rhodesian Ridgeback puppy was keeping an eye on things. Mom turned her back to pour some tea and turned around just in time to witness Jason companionably letting the puppy have a gnaw of the biltong before popping it back between his own gums. Mom suppressed the urge to banish the puppy – she reasoned that Jason’s immune system would be stronger for the experience – but clearly she kept a closer watch on things after that!! So the article is correct then – it’s not a weird and isolated custom, but widespread practice to let teething babies at the southern tip of Africa gnaw on dried raw meat. We breed them tough. In fact, some businesses even advertise teething biltong especially for babies – it is made without the salt which would be harmful to a baby. But what is this biltong that we Southern Africans are apparently weaned on and never get out of our system?

Well, simply put, it is cured, spiced, air-dried meat. The name is an Afrikaans word which comes from bil, (from Middle Dutch bille) meaning buttock/rump + tong, (from Middle Dutch tonghe) meaning tongue. The name is descriptive – biltong literally means strips (or tongues) of meat from the animal’s rump which is spiced, cured and dried. Biltong was developed as a means of preserving meat so that there would be meat available during the lean hunting season (many African tribes still use a version of biltong in this context), as well as to provide a non-perishable source of meat to early pioneers as they travelled inland. Traditionally, the whole beef carcass was used to make biltong, although today silverside, topside and flank are most commonly used. Superior quality biltong can be made from the “rugstring” – the strips of muscle running either side of the animals’ spine – or from the fillet. Although beef is the meat most commonly used, it is also not unusual to see ostrich and various types of game (kudu, springbok, blesbok and impala being some of the varieties available). Pork and lamb/mutton are not used, but I have seen both chicken and tuna biltong (both look a little strange and because of the smaller cuts of meat used, they tend to be really dry). The meat is cured using salt, then washed with vinegar and finally seasoned with spices (usually salt, pepper, sugar and coriander) – the exact ingredients and their ratio is often a closely guarded family or professional secret! After this, an S-shaped hook is hooked through one end of the meat strip and it is hung up to dry somewhere dry, breezy and well-lit (but not in direct sun). Traditionally, this might have been along the beams of a roof or even along wires strung between tree branches, but for the modern day home biltong chef, it is usually in a home-made biltong box (basically a box with solid of mesh sides, a rail for hanging the meat and a light source) or in a commercially made drying cabinet. The slower the meat is dried, the more tender the texture, so no need to rush it! How dry you want your meat is also a matter of personal preference – I like mine very “wet”, rather like prosciutto, while my husband prefers his harder and dryer – apparently with practice, one need only squeeze the outside of a stick of biltong to be able to determine how moist it is on the inside! In any event, the process will take a few days so don’t be in a hurry! [Question: is this the African version of Slow Food? :o)] Another form of dried meat prevalent in the USA is jerky (developed by the native American tribes and called “charqui” – jerky seems to be a corruption of this word). Often, as a last resort when trying to explain the concept of biltong to English friends (and trying to reassure them that it is not total insanity to pop dried raw meat into your mouth!), I use beef jerky as an analogy, but after a bit of research for this post I have found that this is not a 100% accurate analogy. For a start, take a look at what the Wikipedia definition of biltong says: “Though its keeping properties are the same, it is a finer form of jerked meat than American jerky. The best biltong has been compared to the Prosciutto of Italy.” OK, now I don’t want to start any intercontinental dried-meat rivalry, but that does make me rather proud of our biltong!! Seriously though, as far as I can see, the main differences between biltong and jerky are that:

So although they are similar, they are not identical (and I leave it to the individual to decide which he/she likes better!) Now that I have you all in the mood for biltong, where can you get some? Well, there are some excellent sites available telling you everything you need to know about making your own – from meat selection to spices to biltong box making. In particular, check out St Marcus,  Biltongbox, Shebeen and Mark Blumberg, all of which include recipes and tips. You can also check out Brian’s recent post over at Kitsch’nZinc and see his recipe as well as his really novel use of an old computer! For the more timid among us (like me!!), you could also buy the stuff ready-made. If you are lucky enough to be in South Africa, every butcher, supermarket and corner café will have some, but you would do well to search out a specialist biltong store as the quality is usually better.

My favourite places to buy biltong are at the biltong shop in the Petroport at Storms River Bridge on the N2 highway between Port Elizabeth and Plettenberg Bay – always worth a stop – and a biltong shop near the Tourist Info kiosk in Oudtshoorn – no idea of the name I’m afraid! I tend to prefer sliced biltong or biltong nuggets while hubby prefers the while sticks which he can then slice himself or gnaw on, as the mood takes him. Again, this is a matter of personal taste! If you are not fortunate enough to be in SA, biltong is readily available on the Net at places like:

I’m sure there are others places eager to sell you biltong – but I thought I’d give you a few just get you started on the right track. Phew – and to think I thought this would be a quick, easy post!?! But I hope all my detailed explanations and the info on some of the linked sites will provide you with a better idea of why putting this particular type of raw meat into your mouth is NOT total insanity – in fact, it is so safe, even a child could handle it 😉 Generations of Saffers and Zimbos can’t be wrong!