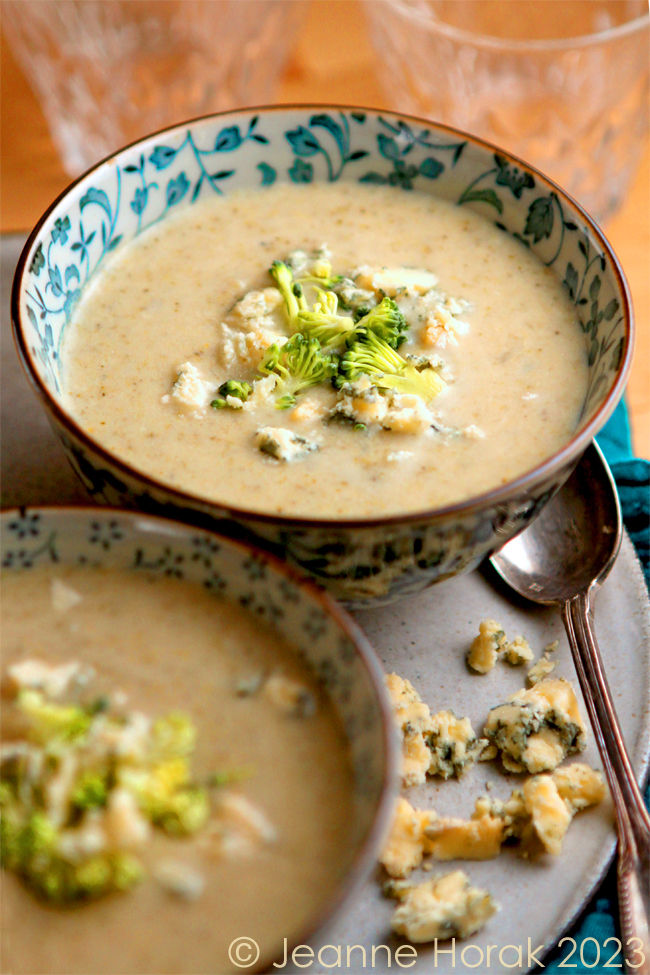 “The poets have been mysteriously silent on the subject of cheese.”

So wrote English writer Gilbert K Chesterton in the early 1900s. And it is true – ask a poetry fan for a poem they know about food and they can probably come up with a mention of wine or bread or plums or figs. But there does seem to be a distinct lack of cheese-themed Edam elegies; Vacherin villanelles; Halloumi haikus… or Stilton sonnets.  So Mr Chesterton said: “Hold my beer!” and set about changing that.

He penned at least two poetic love letters to Stilton, one being… you guessed it – Sonnet to a Stilton, which starts:

“Stilton, thou shouldst be living at this hour
And so thou art. Nor losest grace thereby;
England has need of thee, and so have I…“

He also wrote Stilton and Milton; Or Literature in the 17th and 20th Centuries which contains the fabulous stanza:

“My table groans with Stilton – for a while:
Paradise Found not Lost, in Milton’s style.
Green as his Eden; as his Michael strong:
But O, my friend, it will not groan there long.“

I was meant to spend Christmas with friends last year and had promised to bring a starter and cheese board, but a few days before Christmas they came down with Covid and I ended up electing to stay home for Christmas. Which was fine… other than the fact that I had already purchased my body weight in cheese to take for our lunch! So there I was, alone at home with a table like Gilbert Chesterton’s groaning with Stilton, and a nagging suspicion that I am not the world’s biggest blue cheese fan. But all blue cheeses are not, in fact, created equal.  If you have had a negative experience with a particularly pungent Roquefort, do not lose hope! Not only are different blue cheeses made in different styles and with different types of milk (cow, ewe or goat), but they also have a definite scale of pungency, from mild and creamy to sharp and strong. If you are after a creamy and mild blue, go for Italian Gorgonzola or Danish Blue. If you love it strong and wild, go for French Roquefort or Spanish Cabrales. And if you are after an excellent balance of crumbly, creamy, salty and tangy then Stilton is for you. 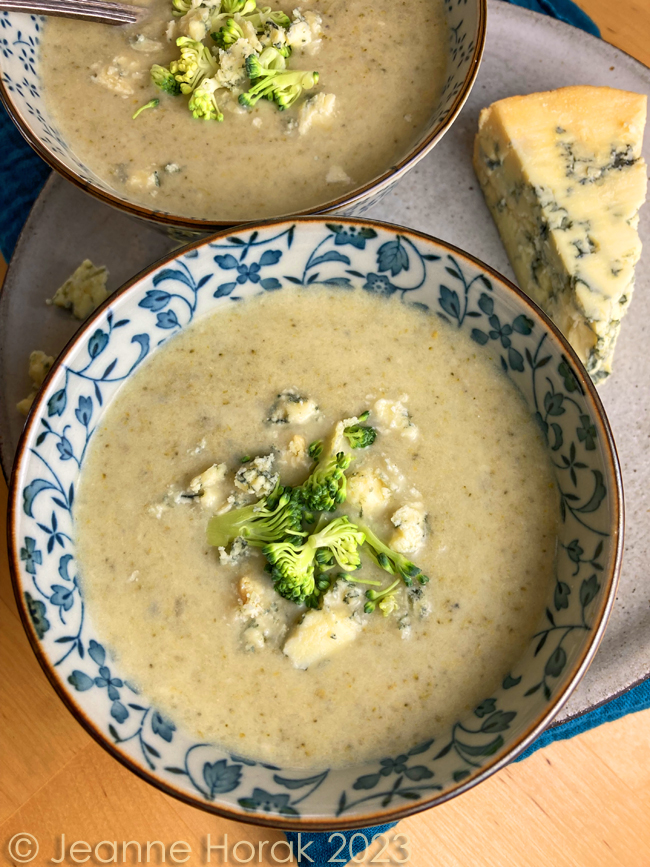 Stilton is, after Cheddar, possibly the most quintessentially English of cheeses. It enjoys European Protected Denomination of Origin (PDO) status, meaning it can only be made in one of 6 dairies in Derbyshire, Nottinghamshire and Leicestershire, using traditional recipes – the process from milk to cheese takes 9 weeks!  The name has also been registered as certification trademark to the Stilton Producers Association since 1966, the only British cheese to achieve this. But the cheese’s history can be traced back to the 17th century when historical accounts refer to the fact that Stilton village was known for its cheese.  It was probably more of a hard cream cheese at the time (pressed and boiled in its whey), made with whole milk and added cream which set it apart from other contemporaries, which were generally made with semi-skimmed milk to keep the price down. Over the years, whether by design or accident (e.g. the rind cracking and letting in bacteria), Stilton developed into what we know today: a creamy and pungent unpressed semi-hard blue veined cheese.

The cheese curds are packed into large cylindrical moulds and left to mature and develop a rind. The characteristic blue veins arise when, after five weeks of maturation, the cheese roundels are pierced with multiple stainless steel needles to introduce Penicillium roqueforti which gives the cheese its characteristic blue veins and distinctive flavour. Before being sold, each roundel is “graded” or tasted to make sure if has the right flavor profile to be sold as a Stilton. You also sometimes see white Stilton which is produced in the same way, other than the introduction of the Penicillium roqueforti, and is often used as a base for blending with apricots, berries, ginger and citrus to create dessert cheeses.

Blue Stilton is not as indulgently creamy as Gorgonzola or Cambazola, but also lacks the overwhelming pungency that some blue cheeses have. It is salty (making it the perfect foil for sweet accompaniments like grapes, preserved fruits in syrup, or chutneys) and nutty (making it a great companion for nuts like walnuts, especially with a drizzle of honey), with a crumbly texture and an edible rind. It is delightful when enjoyed with a glass of port after a meal. Although I had been planning to serve my half kilo slab of blue Stilton as part of a cheeseboard with all the above accompaniments, it seemed a bit… extravagant for one so instead I started off the new year reviving one of my favourite childhood traditions: Sunday soup nights. Broccoli is a classic pairing with nutty Stilton and this delicious soup reaffirms why. It’s super simple to make, low-carb, keto-friendly and gluten-free (providing you use GF stock) – but most of all it is comforting, indulgent and delicious.  I urge you to give it a go, but I take no responsibility for any love poems that you feel inclined to write after tasting it! 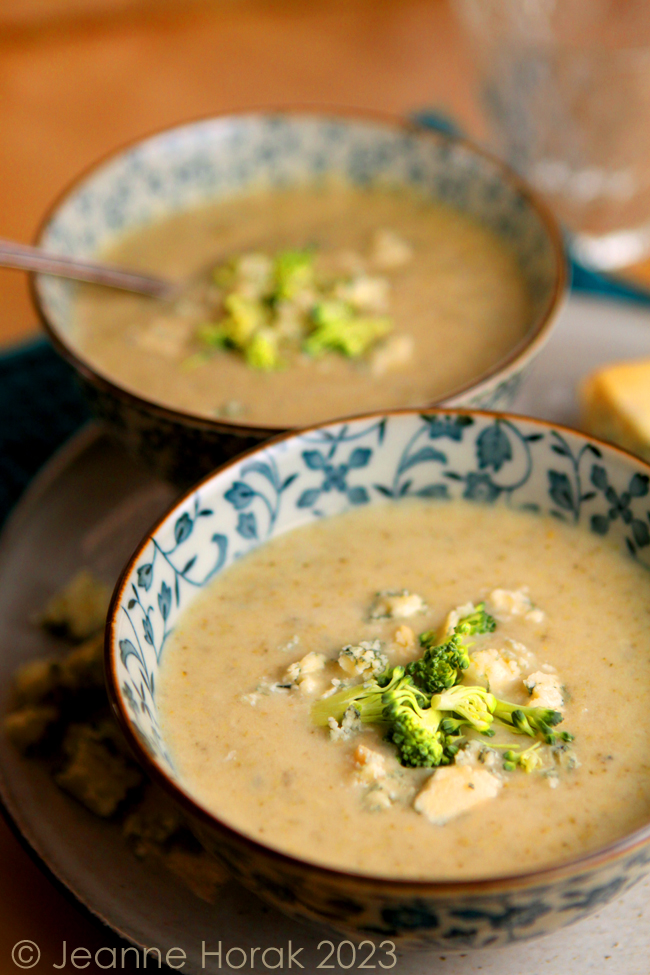 You might enjoy some of my other soup recipes:

This soup freezes very well so you can make in large batches and freeze in portions.

Any blue cheese will work, but a very mild cheese might not add enough of a robust flavour to the soup.

Pin this post so you can find it later! 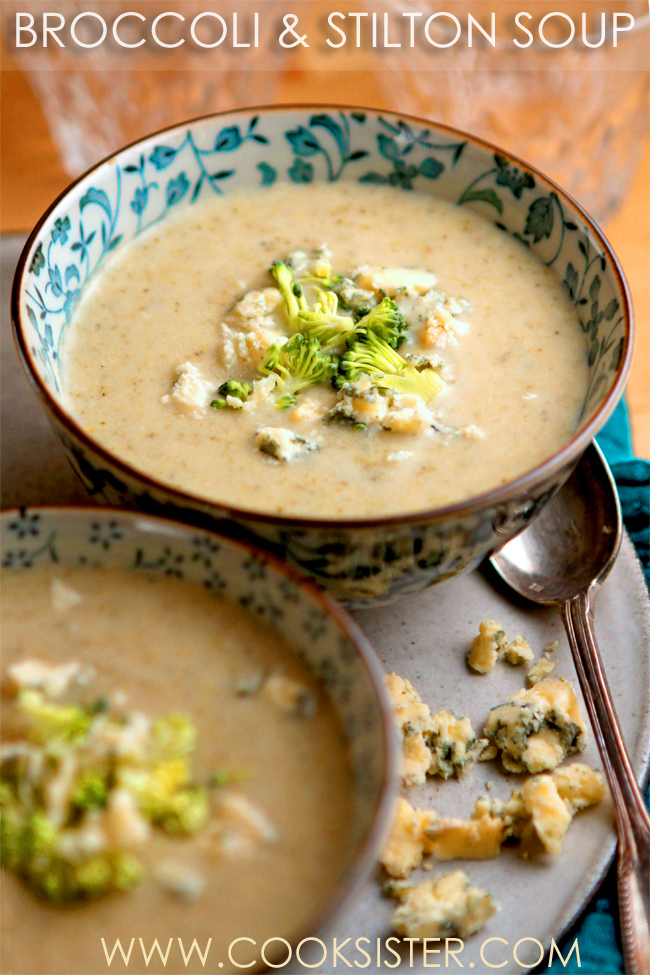