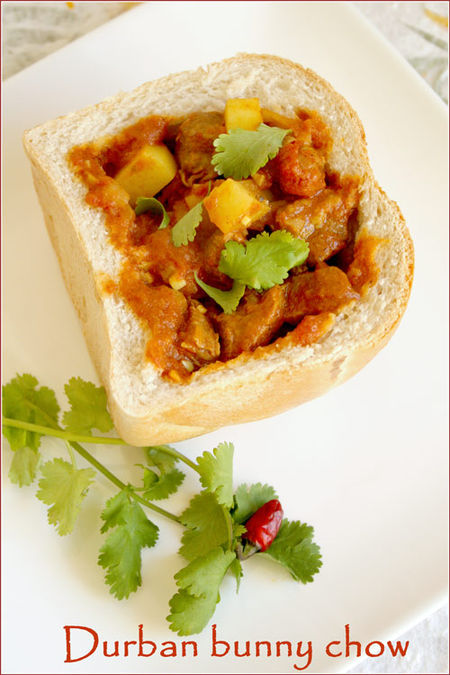 **DISCLAIMER** – no fluffy bunnies were harmed in the making of this dish!!

Phew.  Just thought I'd get that disclaimer out of the may before people started hurling abuse, shoes or frying pans 🙂

Street food – it's such a great concept.  Something cheap and readily available, sold on the streets in a portable format, and eaten by the average local.  Think Leberkaese rolls in Austria; grilled corn on the cob in Morocco; falafel or shawarma throughout the Middle East; frites with mayonnaise in Belgium; poutine in Canada; tacos in Mexico; chilli dogs and corn dogs in the USA; and arepas in Venezuela.

In South Africa, we have the usual collection of generic international street food like hamburgers, fried chicken, or fish and chips, but here and there you will find some truly South African food being sold on the streets.  Uputhu, a stiff maize porridge, is commonly sold to commuters with a ladleful of stew. Boerewors rolls (spicy South African sausage, barbecued and served in a roll) are popular throughout the country and almost every shopping centre has a vendor outside selling these on a Saturday morning.  Or you could head for Durban in Kwa-Zulu Natal to sample another home-grown favourite:  bunny chows.

There is some discussion as to the origin of this steet food which broadly consists of curry ladled into a scooped-out loaf of bread. One theory is that it originated at a restaurant in Durban's Grey Street when, in the early 1900s, caddies from the Royal Durban Golf Club were unable to get enough time off over lunch to dash to predominanty Indian Grey Street to pick up a curry for lunch.  The caddies would ask their friends to bring back curries for them and because there were no polystyrene containers back then, the shopkeepers sent the curry in holowed out loaves of bread.  There was also no disposable cutlery, so the bread was useful as a tool to dip into the curry and use instead of a fork.  This theory might also explain the rather unusual name:  the shopkeepers on Grey Street were called banias (an Indian caste of merchants), and "bunny" could be a corruption of this. Another similar theory is that bunny chows originated as a means for the (mostly Indian) labourers to take lunch onto the sugar cane plantations of Kwa-Zulu Natal in the days before disposable containers.

The curry used in a bunny chow varies according to taste – chicken, lamb, beef or vegetable are all popular, and the level of heat varies (beware – Durbanites like theirs HOT!). The bread component of a bunny chow may be a whole, half or quarter white loaf, and the scooped out centre (known as the virgin) is replaced on top of the curry before serving.  The virgin is then dipped into the gravy before and eaten as an appetiser, and it is considered very bad form indeed to take somebody's virgin without asking ;-).  As the level of the curry drops, you can rip off bits of the bread bowl to use instead of cutlery – so all in all it's a fun but potentially messy meal and not suitable for first dates or important business lunches!

Bunny chow terminology is a minefield for the uninitiated.  When suggesting to friends that you should go and get bunny chows for a meal, using the word "chow" marks you out as a clueless foreigner – the correct term would be "let's go get some bunnies for lunch".  And when ordering, you shouldn't even use the word bunny – you merely order a whole, half or a quarter, depending on the portion of bread you want, and specify the type of filling you want (e.g. a half beef, or a whole chicken).  And be very careful if you have a funny bunny – this is a bunny made from the centre of the loaf rather than the end and, as such, has no crust at the base.  Make sure you support the base, otherwise your friends will quickly let you know where the "funny" part of the name came from 🙂

The recipe below is a great basic lamb curry and could also be served on rice.  If you are making bunny chows though, be sure there is enough liquid for plenty of gravy:  you want the gravy to soak properly into the bread "bowl".  I was lucky enough that my lovely friend Simla brought back a packet of Osmans Taj Mahal roasted Durban madras curry powder for me last time she went home, which I use in my curry - but you could use any ready-mixed curry powder that you like (Rajah madras curry powder would work well if you like it hot).  You can also add chopped chillies at the end to spice up individual portions if some diners like it hotter than others.  And as always, if you have time try to make the curry a day in advance because the flavours always improve on the second day.

So what are you waiting for?  Try these for yourself and experience the authentic taste of South African street food! Cube the meat and slice the onion; peel and dice the tomato.

Heat the oil and add the cinnamon stick, cardamom pods, onion and curry leaves. Fry until the onion is light golden brown in colour.

Add the meat and cook for about 10 minutes. Then add the poatoes and about 1/4 cup of water.  Lower the heat and simmer over low heat until the meat is tender and the potatoes cooked.  Keep an eye on it to make sure the bottom of the pot does not burn.

When the meat is cooked through and the potatoes are tender (about 30 minutes), add the garam masala mixture. Test for seasoning and add salt if necessary. Simmer for a further 10 minutes on a low heat.

In the meantime, take a fresh loaf of white bread  – it needs to be crusty on the outside with a nice, soft crumb.  Little farmouse loaves half the size of standard loaves are ideal.  Halve the loaf and scoop out the soft white crumb, leaving the crust to form a "bowl".

Spoon the curry into the half loaf and serve, garnished with coriander leaves.  The soft crumb can be dipped into the curry and eaten as well.

As featured on Channel4 Food