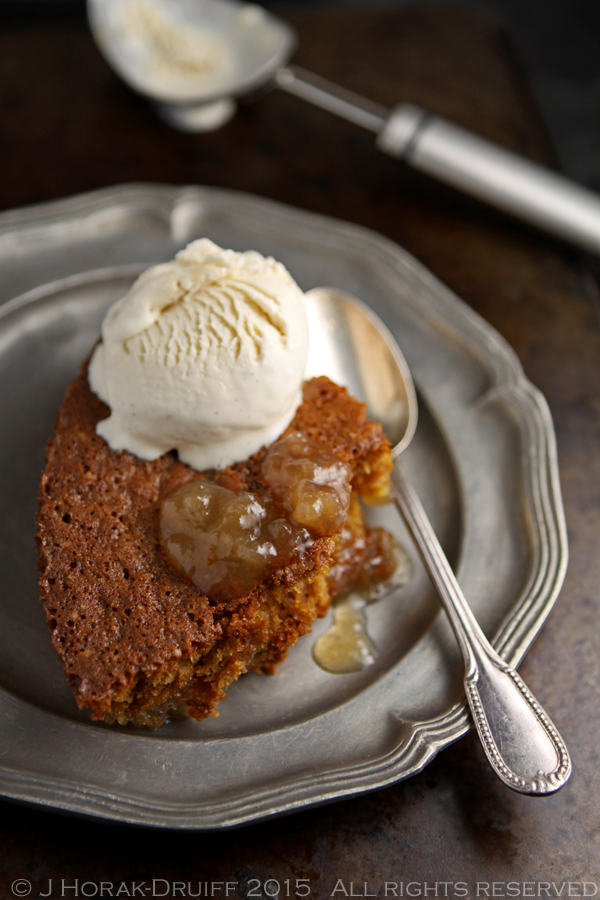 As far as I can tell, one of the defining characteristics of the South African palate is a love of sweet things.  Take that most South African of men, my father, as an example.  My mom used to say that as a little girl I never took sugar in my tea or coffee (yes, I was allowed to drink caffeine as a child.  No, it doesn’t appear to have done me any harm!!) – that is, until I saw my beloved Pappa taking sugar in his.  And BOY, did he take sugar.  I remember carrying his little empty espresso cup back to the kitchen to be washed with the base covered in a crust of undissolvable sugar (because, hey, there is only so much water in an expresso cup…).  And when I visit him these days, things continue pretty much along the same lines.  But seeing as he turns 85 this year, it doesn’t appear to have done him much lasting harm 😉 As I have mentioned before, at braais he insists on having thick slices of white bread spread generously with apricot jam.  And he is the only man alive that I have ever seen sprinkling his tomato and mozarella salad with copious amounts of sugar, allegedly because he “likes the crunch”.

I also remember many years when the family would plan to go on holiday when he got home from work at lunchtime on a Friday.  For some reason he would always insist that the quickest and easiest meal to ensure a quick getaway was a “fruit lunch”.  This consisted of tinned mixed fruit salad (which I have never really cared for) and a scoop of ice cream.  Even as a child, something in me found this to be intrinsically wrong – but my father loved it and insisted on it, so the dreaded fruit lunch it was.  Having observed his behaviour in restaurants throughout my whole life I have noticed another fundamental difference between us:  I look forward more than anything to the amuse bouche and the starter.  To me they always sound like the most interesting and quirky dishes on the menu, and by the time dessert comes around I often head straight for the cheeseboard.  For my father, it is the other way round.  He cares not one jot for amuses bouche, canapés or starters and will seldom eat them.  He will have the plainest fish for a main course nine times out of ten.  But when he really gets excited is when he surveys the dessert menu.  No matter how full he is, there is always room for dessert, and the sweeter the better.  Chocolate mousse is a perennial favourite, but creme brulée gets a look in these days too.  And his most vivid and cherished memory of his 80th birthday celebration was not the fact that all six his children came from all over the world to be with him.  Oh no – it’s the Greek chocolate cake he remembers.

So it should then come as no surprise that South Africans love their puddings, and what a rich heritage of puddings we have to draw on!  The French Huguenots gave us blancmange and oeufs a la neige (sneeueiers); the Dutch and their Malay slaves gave us all manner of steamed and baked spicy, fruity puddings; and the English left behind a trail of trifle and bread and butter pudding.   When you look in an Afrikaans recipe book you are amazed at the range of hot puddings that appear there:  predikantsvroupoeding (vicar’s wife pudding), Jan Ellispoeding (apparently named after famous Springbok rugby player Jan Ellis), bruinpoeding (brown pudding), sagopoeding (sago pudding), malvapoeding (literally, mallow pudding, although it contains no marshmallows…), armmanspoeding (poor man’s pudding) – and the subject of my post today, asynpoeding (vinegar pudding). Try as I might, I could not find the historical antecedents of this pudding, but if anybody knows of an English, French or Dutch pudding that includes a syrup made from vinegar, I’d be very pleased to hear from them.  Like most of our puddings, the ingredients are pretty basic and include Afrikaner staples like apricot jam, ginger and nutmeg.  Some recipes also include raisins, but I prefer to leave them out.  And although the name seems to suggest something lip-puckeringly, erm, vinegary, don’t worry:  the vinegar is only in the syrup and is actually a nice subtle counterbalance to the sweetness, as well as marrying beautifully with the spices.  Although it’s only one step away from being a self-saucing pudding, it is traditionally served with runny vla (custard).  But as there is plenty of sauce already, I served it with good vanilla ice cream.

This one’s for you, dad – the pudding monster 😉 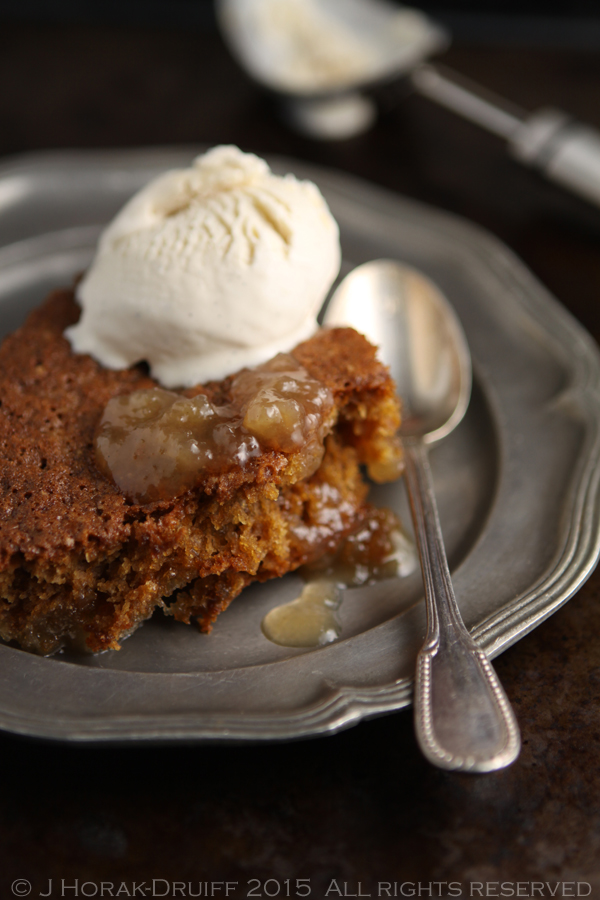 Pre-heat the oven to 180C.  To make the syrup, over medium heat, heat the vinegar, boiling water and sugar.  Stir until all the sugar has dissolved.  Allow to come to the boil and then remove from the heat and allow to cool.

Spoon mixture into a buttered ovenproof dish with sides twice as high as the level of the batter.  Pour the syrup carefully over the batter (there will be a lot of syrup – this is correct!) and bake for 35-40 minutes or until a skewer inserted in the centre comes out clean.  Serve hot with custard, whipped cream or ice-cream.

You can use any kind of white vinegar – I have used white wine, apple cider and apricot vinegars.   I would not recommend strongly flavoured vinegars like malt or balsamic.

There will seem to be way too much syrup when you pour it over the batter – almost as much as the batter itself.  Yes, the syrup will completely cover the batter like a lake, but this is normal.  Don’t panic! As you bake, the syrup will soak into the batter and migrate to the bottom of the dish, so that once the pudding is baked, there will be sauce in the base of the dish to spoon over each serving.  It’s really not that different to a self-saucing pudding.

[This post forms part of an new occasional series entitled “South African recipes from A to Z” and also appears on SA Rocks under my weekly Rainbow Pantry column.]