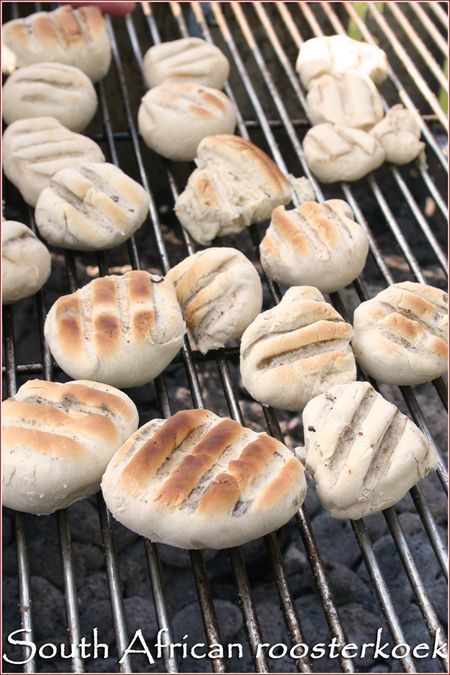 Roosterkoek (literally grill cake – say “roor-stir-cook” and try to roll those r’s!) is the traditional bread to accompany a braai or BBQ. The roosterkoek are simply balls of bread dough cooked on a grid over the coals, and are best eaten piping hot and straight off the grill. There are other traditional braai breads (e.g. potbread), but these require a cast iron three-legged pot with a flat base, whereas all you need for roosterkoek is some dough and a fire! My earliest delicious memory of roosterkoek is eating it at a now-defunct restaurant in Plettenberg Bay, South Africa.

The restaurant bore the unlikely name of the Why-Not (and for those of you who may think you recall it, I am not talking about the restaurant that occupied the upper level of the modern complex overlooking the Central Beach parking lot – I am talking about the old white building that preceded it and fell victim to a fire in the early 1980s). The chef patron was French and the unusual name was a direct translation of “Pourquois Pas?” which (I think) was what he started out calling his restaurant. But to us as kids, it was simply “the French restaurant”, and I remember the restaurant primarily for two things: – the bearded French chef had a notoriously volatile temper and could often be heard yelling in the kitchen, long before Gordon Ramsay made this seem commonplace; and – instead of the usual boring basket of bread, they served roosterkoek before the meal. It always came to the table piping hot off the grill, together with a little bowl of anchovy butter and was the most simply delicious thing I had ever eaten.

Because my father was never the most enthusiastic braaier in the world, we never had roosterkoek at home, but as a teenager I was thrilled to discover that friends could make this stuff on demand, and on a braai!! Better still was the realisation that you could cut preparation time down by buying ready-made bread dough from a local bakery. They would sell the melon-size ball of dough, risen and ready to go, in an inflated plastic bag and all you had to do was make breadroll-sized balls and pop them on the grid! But even if you make your dough from scratch, these are not difficult to make and provide a whole lot of delicious for not a lot of effort. It takes a bit of skill to get the rolls to bake through without creating a layer of charcoal around the outside, and even more skill and vigilance to make sure they don’t stick irretrievably to the grid, but once you have the hang of it there’s no looking back!

The recipe below is a slightly adapted version of the one passed along to me via my dear friend Donald, from Tannie Joan (remember – she of the Three Tannies fame?) – thanks Tannie! For those of you who want to perfect your roosterkoek skills, it may also be helpful to bear in mind the following hints and tips: 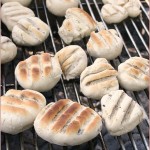 Other bloggers baking up a storm with yeast include:

I am submitting this recipe as my first (but hopefully not my last!) entry into this month’s Monthly Mingle, the even started by my gorgeous sister-from-another-mother Meeta.  The theme she selected is South Africa – so how could I resist making something to show off my country’s cuisine to you? The deadline is 10 May – feel free to check out my South African recipes if you need some inspiration!