After a lovely relaxing day of being “leaf peepers” around the Westport area, we were sad to leave but at the same time I was greatly looking forward to our next destination:  Stonington, Connecticut.  It’s an easy drive up from Westport and by mid-morning we were there, knocking on the door of Nancyanne’s house.  Nancyanne is a distant relative of Nicks and we have spent a few happy evenings with her and her delightful mom Nancy when they’ve visited London, and her gorgeous house is as relaxed and stylish as she is – which means it fits right into Stonington, as pretty a New england coastal town as you could hope to find. and serves stylish light fare.  I was feeling rather scurvy-ish, so the decision was quickly made to order a salad!  What arrived was a mixed green salad topped with slices of the most perfectly seared tuna that I have seen in ages – gorgeously uncooked in the centre and just perfectlyt wonderful. I also liked the tortilla crisps on top.  I’m afraid I can’t tell you the exact price as I never saw the bill, but the prices overall were quite reasonable. I liked the relaxed atmosphere and the fact that the staff seemed to know most of the patrons by name – and I loved the tuna 😉 After lunch, we strolled around the very picturesque Borough (what the older part of Stonington is called), taking pictures of the beautiful clapboard houses, many sporting American flags.  I always wonder when I visit America whether the flag has always been such a common sight or whether it is part of the wave of 9/11 patriotism.  Maybe some American readers can shed light?  Either way, it makes for glorious photographs.  From there, Nancyanne took us for a drive to neighbouring Mystic.  Well, legally, it is part of Stonington and Groton (depending on which side of the Mystic river you are on) but it has its own identity and is home to the Museum of America and the Sea.  The name Mystic comes from the indigenous Pequot term missi-tuk for the local river, meaning a large river whose waters are driven into waves by tides or wind. This was corrupted by the first European settlers who founded the town in 1654.  In the 19th century, shipyards sprang up in the area, giving Mystic its maritime heritage.  Today the whole place is heavily touristed, partly due to the restored quaintness of the Mystic Seaport, partly because of the plethora of olde worlde shops, but also because the town is a movie star – the Mystic Pizza in the eponymous movie really does exist in Mystic! (Apparently the town also features in the #47 Hardy Boys book, The Mystery of the Whale Tattoo – things ya didn’t know ya didn’t know.)

Stonington, on the other hand, grew mainly as a fishing and whaling community and is today home to the last working commercial fishing fleet in Connecticut.  What I also didn’t know is that Stonington is home to a large Portuguese community – so large and thriving, in fact, that there is a Portuguese Holy Ghost Society on Main street, known locally as the Portuguese club.  The Portuguese community was founded by two men, Frank Sylvia and Joseph Vargas, who were born in the Azores (a Portuguese archipelago) and came to the USA in the mid 1800s. The community grew not only because of their offspring (13 between them!) but also because of an influx of more Portuguese from the Azores during the 1800s and 1900s.  In response to the growing need for social activity within the expanding Portuguese community, the Holy Ghost Society was established in 1914.  Such societies exist worldwide, wherever Portuguese communities thrive, and have both a social and religious significance as they commemorate the 16th century feeding of the starving Portuguese people by Queen Isabella, who had to sell her jewels to do so.

So why am I telling you this?  Because Nancyanne announced later that afternoon that we were going to the Portuguese club for dinner (as far as I recall, it’s only open one Friday per month so our timing was quite fortuitous!).  I was somewhat surprised:  the last Portuguese club that I had set foot in was the tiny one in Port Elizabeth, with a Portuguese university friend. Somehow I never expected to find anything similar in Connecticut.  And in some ways, I was right – this was a far grander affair than the Port Elizabeth club.  On the ground floor of the imposing building is a bar, through which you walk to ascend (follow the noise!) to the large upstairs room where dinner is served.  We stepped into a room so full of sound and human activity that I was momentarily stunned into silence.  At the door was a gentleman taking your order and cash payment upfront.  Bustling to and fro from a hidden kitchen were stout Portuguese matrons, bearing plates of food.   And seated at long trestle 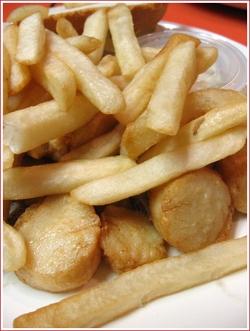 tables covered in white paper cloths, beneath a huge Portuguese flag suspended on the wall, were the dinner guests.  Rather like in Mexico, I was struck by the beauty and noisy ease of people who are so completely sure of who they are and seem so deeply rooted in their culture – not the eclectic nomads that my generation are turning out to be.  And of course, we were the object of some scrutiny as we were clearly “not from round these parts” 😉 Having placed our orders we could find no space upstairs and so ended up in the downstairs bar, where one of the locals came over to say hi to Nancyanne and then proceeded to tell me he had DEFINITELY met me before.  Erm, yes.  So what did we eat?  I started off with clam chowder.  It was my third day in New England and I had not yet fulfilled my promise to eat local seafood every day, so I realised I had better get started.  Sadly, I found the chowder to be a disapointment.  OK, so you were not in a chi-chi restaurant but a working man’s club, but the chowder lacked creaminess and seasoning and I suspect it did not do the clams justice at all.  The main event, though, was the fresh scallops. There is not a lot of choice in how you want your seafood served:  it’s deep-fried or nothing.  But because of the high turnover, you can be guaranteed that everything will be crisp and fresh and hot.  The scallops were sweet, the company was good – what more could you want? 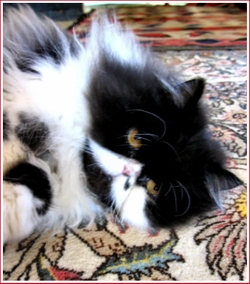 After a wonderful night’s sleep, we were awoken by the gorgeous creature on the left, Nancyanne’s cat, wanting company and attention.  We got up slowly, packed our stuff and headed downstairs for a coffee and a chat.  As we didn’t have to rush off, Nancyanne suggested breakfast at The Yellow House, literally at the end of her street.  The building is yet another charming clapboard structure, unsurprisingly painted yellow, and entering it is more like walking into a friend’s farmhouse kitchen than a restaurant.  It has a lovely homely cottage feel and the smell of coffee is pretty much irresistible: my cafe mocha was certainly a dream.  And to eat, I had one of their huge range of bagels – toasted with cream cheese and olive spread.  Fresh and delicious: breakfast heaven!  From there, we strolled down to the harbour, past the last autumn die-hards at the farmer’s market, shivering beside their wares in the 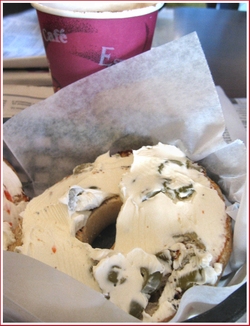 The harbour is really interesting because it is a working harbour, rather than the sort of marina for out-of-town pleasure boats that seems to be taking over coastlines all over the world.  We watched a couple of the boats coming in and going out and tried our best to stay out of the way of people doing their jobs.  Nancyanne also told us about the annual Blessing of the Fleet ceremony during which the town takes on a festival atmosphere with parades and parties, and there is a mass said to commemorate those who lost their lives at sea and to pray for the safety of the fleet in the coming year.  She had also mentioned Bomster scallops a few times since we arrived – I had no idea whether she was talking about a type of scallop, a place or a person.  As it turns out, we were about to find out, and meet the person in question.  Having seen one of the Bomster boats in the harbour, Nancy took us to an unprepossessing little building on the dock. Inside was one of the most amazing testimonies to human honesty that I have ever seen:  two chest freezers, crammed with every variety of expensive seafood you could wish for, a price list and… an honesty box!  Really!!  While I was still picking my jaw up off the floor where it had dropped in amazement, a large gentleman came out of the office and into the little room where the freezers are.  Nancyanne mentioned that she was showing some visitors around and had told them about Bomster scallops – and he announced that he was in fact one of the Bomster clan.  He told us that he was no longer on the boats, but that the fishermen often stayed out in the rough waters of the North Atlantic for a week or more.  He told us his brother had been out on the sea the night before in 8m swells and high winds, which made me look out at the deceptively flat water beyond the harbour wall and shudder.  It was like stepping momentarily into The Shipping News.

But all good things must come to an end, and as our harbour walk finished, so did out visit to Stonington.  After saying our goodbyes to Nancyanne, we hit the road to our final destination of the trip:  Boston. 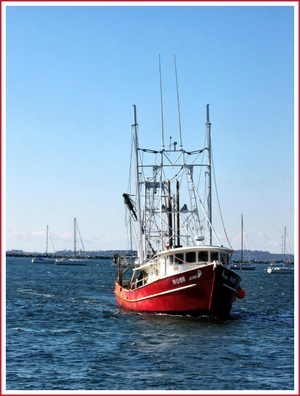 New York, Day 3: The Empire State Building and beyond

New York, Day 2:  Luzzo’s and the quest for the perfect pizza

« The best pasta sauce in the world… ever!
Bacon-wrapped venison loin on the braai »