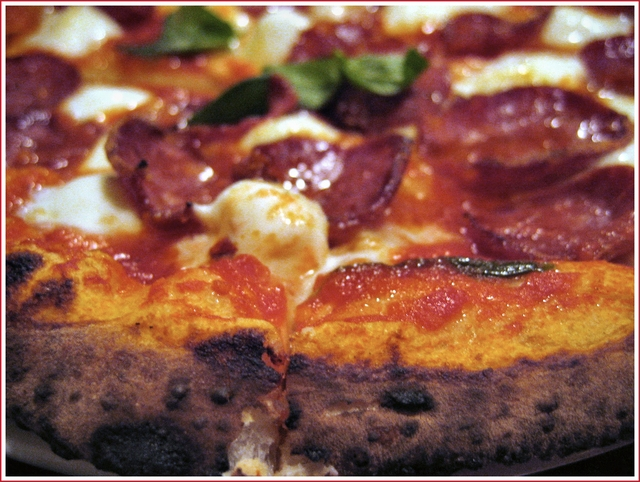 Mmmm, pizza.  Can there be a more perfect food?  It’s carby, it’s cheesy, it can be customised to be austere or extravagant or bland or spicy.  It can be eaten alone or happily shared with friends.  It can be eaten while walking down a street in Rome, or standing up at a station cafe in Vienna, or sitting at an ocean-side restaurant in South Africa.  It can be satisfyingly bread-y in the Napoletan style, with a slight char from the wood-fired oven.  Or it can be paper thin and crisp in the Romana style, barely supporting its stringy, delicious mozarella topping.

It can also be a crushing disappointment when not made with love and care.

For instance…  most pizzas you find in restaurants around the world have sub-standard bases.  I remember going to Pizza Inn in Port Elizabeth as a student where they had an eat-all-you-can night on a Tuesday.  My (unsurprisingly male!) friends would have a competition to see who could eat the most slices, and the way they’d keep score was to eat the centre of the slice but leave the crusts piled up on their plates like so many watermelon rinds.  When I asked why they did this, they argued that the crust was just a waste of space.  Which is exactly the opposite of how serious pizza afficionados view the crust!  Traditionally, pizza bases were made with leftover bread dough and should therefore develop great yeasty air bubbles in the cooking process.  But most restaurant bases (outside of Italy, anyway!) are flat and heavy, with a taste and texture suspiciously reminscent of the cardboard boxes in which they are sold…  And we won’t even get into “stuffed crust” pizzas or the claggy, doughy mess that is a deep pan pizzas.  Yes, I know that Chicago they are desirable.  No, I don’t share that view!!

And even if you get the base right, it is possible to get the toppings very, very wrong.  In essence, a pizza is a simple thing.  A good dough, good tomatoes, good cheese, and maybe some herbs or meat.  What can go wrong?  Well, for a start, crummy, tasteless tomato sauce.  Or bland, overprocessed cheese.  Or cheap toppings.  Or the “classic” ham and pineapple combo which, like David Gest in a bikini, is just plain wrong.  Or a dry, bare base, its modesty barely covered by a smear of sauce and a couple of tired basil leaves.  Do I have to continue??

But when pizzas are good… MAN, they are good!  I have my favourites.  In South Africa, this would be Cranzgots in Plettenberg Bay for a thicker base and more cheese than you can shake a stick at.  Their dough achieves that very desirable aeration in the crust, making it chewy yet light, and traditional toppings (vongole – or baby clams) vie for space with more esoteric stuff like the Brutus (spinach, bacon, mushroom and feta).  Cranzgots is a classic.  But if I am in the mood for something lighter, I can always head across the road to Cornuti al Mare (also in Plettenberg Bay), where they serve ultra-thin base pizzas with toppings ranging from basic to inventive (their bresaola, pear and gorgonzola is a favourite; or the smoked salmon, cream cheese and caviar).  And in a similar vein is Col’Cacchio Pizzeria on the foreshore in Cape Town.

Since New York was home to a huge Italian immigrant population, it is one of the paces outside Italy that is most famous for its pizzas, so I figured that it was a good place to sample some of the good stuff. There is a lot of reading matter on the web about pizzas, how to make them and where to buy them, so I did some diligent research, and here is a selection of sources to get you started:

I have to say a word or two about Mr Varasano before I continue.  He is the kind of foodie obsessive that I can only dream of being – dedicated, relentless, scientifically precise, and single minded.  He took as a starting point the pizzas served at Patsy’s, a New York pizza institution, and set about trying to recreate their pizza base recipe by reverse engineering.  Once he had figured this out, he turned his attention to the actual cooking process and concluded that the problem with you or I trying to recreate a restaurant-style, cooked-in-a-wood-burning-brick-oven pizza, is the fact that domestic ovens just cannot get hot enough.  Yes, you can build your own wood-burning brick oven in the back garden, but in an Atlanta apartment, this is just not practical.  The problem is that most domestic ovens only reach about 500F max, but a brick oven can easily reach 800F+.  This makes it possible to cook your pizza in 3 minutes or so, charring the outside of the crust while leaving the inside moist and delicious.    Even at their highest settings, domestic ovens at, say, 500F will dry the base to the consistency of an oatcake before there is any hint of char.  So… the solution Jeff comes up with is to run his oven on its cleaning cycle (where temperatures can exceed 900F).  Of course, the manufacturer has good reason for wanting to make sure no customer opens the oven at this temperature, so there is a locking mechanism to make sure the oven can’t go onto this cycle unless locked.  No problem – Jeff cut off the lock!!  Read his fascinating story and you will see why this is the only guy I am taking pizza restaurant recommendations from.

On Jeff’s ranking table, I discounted top-ranked Di Fara Pizzeria as they are in Brooklyn and I didn’t want to leave Manhattan.  But second from the top was Luzzo’s Coal Oven Pizza and that’s where we headed. Luzzo’s opened late in 2004 on a site which already contained a decrepit coal-burning brick oven (you are no longer allowed to build these on Manhattan, so finding premises with an existing oven is as rare as finding the Abominable Snowman living in sin with Elvis in the apartment next to yours).  From the outside, Luzzo’s is very unprepossessing.  The shopfront is barely two doors wide, leading to a long, narrow room with a couple of booths near the front and small tables along the opposite wall.  Once inside the ambiance is cosy and the decor, rustic, and rather to my liking, but the tables are tiny and London-style close to one another which makes conversation a rather public affair.  In fact, we heard the entire discussion that the flirting twentysomething student couple next to us were having – despite their wine-impaired attempt at lowering their voices when discussing S-E-X.  Very amusing and made me long not one bit for my twenties 😉

Let me get the criticism out of the way first.  The service sucks.  I was pleasantly surprised that we got a table, but having seated us, the servers disappeared and did not return.  Or they would return and annoyingly refuse to make eye-contact with us when we tried to call them over.  Eventually after about 15 minutes, Nick grabbed a server’s arm and asked if we could place our order, but he got a withering look and a response that she was not serving our table, but would call our server.  Hmmm.  However, once we were over that hump things improved and given that this is hardly a fine dining establishment, it’s a minor complaint.

As we still weren’t very hungry after our whole-cow-eating experience at Katz’s, we opted to share a salad and a pizza.  The Caesar salad was good but not stellar.  But then the pizza arrived.  Oh, the pizza.  I weep at the beautiful memory.  We had ordered the mozzarella, peperoni and fresh basil pizza and had gone for the slightly more expensive mozzarella di bufala.  The crust (as you can see above) was charred to perfection.  The underside was the perfect leopard-spot pattern of charring with the crust slightly more evenly charred.  It was crispy at the bottom, but a chewy sourdough-y moist along the edge.  The tomato sauce tasted home-made and sweet – perfect with the smoky char of the crust.  The peperoni (which I normally can’t stand as it’s too fatty and too dry) was heavenly:  moist with crispy edges and blessed with a spicy kick.  The basil was peppery and perfect.  But oh, that cheese…  It was in soft lumps, rather than gooey, rubbery pools; and it had the melty consistency of mascarpone’s slightly fleshier cousin (does that make sense?  Or was I delirious with pleasure by then?).  The crisp, smoky base with the creamy cheese, the spicy peperoni and the sweet tomato sauce was almost too much to bear.  I was in pizza Nirvana.  Nick just rolled his eyes.  My only regret was that I had eaten anything at all that day – what I should really have done is to go on a detox fast to prepare my body for the joy that is Luzzo’s pizza.  Do not go to New York without visiting this place.

If you enjoyed this post, have a look at my other New York posts: