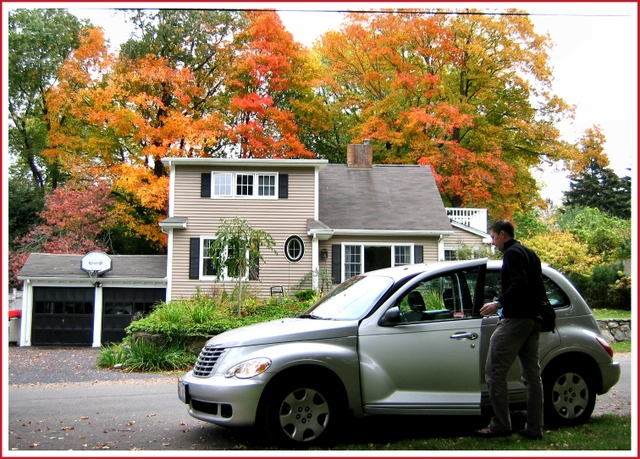 [This post is part of my very leisurely report on our trip to the USA last year in October.]

Waking up on our first morning in Connecticut and looking out of the window, the view could not possibly have been more different to New York.  Where there had been a busy road and grimy brick buildings, we were now being treated to the best fall colour I had ever seen. Where there had been dirty pavements, there were now manicured lawns.  It was heavenly.  Our host Larry sadly had to head off on a business trip, but he had kindly given us the run of the house for as long as we wanted, so we decided to take it relatively easy and just explore the surrounding area.

First stop was to grab a bite for breakfast, and in this regard we had been given very specific instructions by Larry:  do not be seduced by the siren call of the picturesque 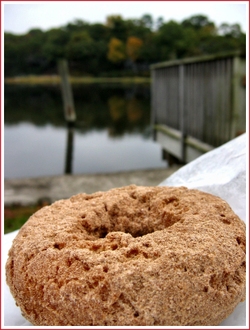 village coffee shops.  Go directly to the Coffee an’ Donut Shop and get your breakfast there.  He had seemed so serious and adamant about it that we decided to take his advice and do just that.  The shop is a small and unprepossessing place in a small shoppping centre a little bit away from the town centre.  There were a few tables inside but they were pretty full so we got our coffee and donuts to go.  There wasn’t a huge selection but all the usuals were there – iced, chocolate, cinnamon and a few others I can’t recall.  Grabbed a couple of coffees and donuts and headed off to find a picturesque spot to enjoy breakfast.  We ended up near the Saugatuck Rowing Club – and let me assure you it is the plushest rowing club I have ever laid eyes on (with the possible exception of Leander).  It is a huge building right on the Saugatuck river and we found a bench nearby with a great view across the tranquil water reflecting the autumn colours on the opposite bank.  So… how was the doughnut?  Un-bloody-believable.  Absolutely the best doughnut that I have eaten in about 20 years – which was the last time my mom made home-made doughnuts.  You can keep your over-sweetened, over-priced Krispy-Kreme or your mass-produced Dunkin’ Donuts.  This is The Real Deal – crispy on the outside and featherlight on the inside, with a thick crust of cinnamon sugar.  I was in doughnut Nirvana.  It’s a good thing this store is nowhere near I live because my weight would just balloon! From there we set a course to kind of meander up the coast a little and then drive inland to New Haven, home of Yale University.  We didn’t have a particular aim in mind – after the meticulously planned calendar of sightseeing in NYC, it was nice just to be able to drift alng and look at the countryside and the autumn colours for a bit. First stop was a Connecticut beach just north of Westport – as you can see from my outfit, it wasn’t exactly beach weather!!  From there we followed the coast, marvelling at the increasingly vibrant colours of the trees.  Nick’s a great one for following the byways rather than the highways, which is how we found ourselves on a far smaller road an hour or two later pulling up at a brightly decorated farm stall.  It looked like veritable cornucopia of autumnal produce, from the glorious multi-coloured ears of corn, to the multicoloured varieties of squash in every size tumbling out of their basket, to the stacked crates of apples.  After the sugar and fat overload of breakfast, I was in the mood for something a little healthier, so I grabbed a couple of apples, selected for nothing other than their sheer crimson prettiness.  As I was paying I asked the stall owner what they were and he said Macouns, which I’d never heard of.  Little wonder, because a) they are only available for 2-3 months of the year and b) they are much sought after in New England, so I don’t imagine many of them are exported to the UK.  These perfectly round medium-sized apples are gloriously red with a thin skin and sweet crunchy flesh with no hint of flouriness.  They look and taste exactly like I remember apples tasting from my childhood – I think I’m in love! From there, we headed along the coast to New Haven – now there’s a town with a split personality if ever I saw one!!  As you approach it on the I-95, it looks like a typical industrial town – none too gorgeous.  But then you follow the signs onto the Yale University campus… and suddenly you could be in England, with beautiful stone buildings and church spires.  It comes as no surprise to find that the charter for Yale (as a college) was signed in 1701, so there is a great deal of history here.  Apart from the architecture, the university posseses an impressive collection of art for visitors to admire and had we not been all sightseed-out we could have spent a few happy hours there.  But our recent NYC sightseeing blitz combined with the lack of parking and the fact that we wanted to try and find some Connecticut vineyards, with the result that we left after only about half an hour of driving and walking around campus. We turned up the I-91 and then took the backroads heading northeast.  We really tried to find some of the vineyards – in particular I remember getting out of the car at a small grocery store to ask where Digrazia Vineyards might be and tried valiantly to follow the directions given… but alas:  no vineyard!  So by the time we struck the I-84 we were a little ill-tempered and hungry!  Good thing, then, that we spotted the Blue Colony Diner.  To be honest, you’d have to be seriously oblivious not to spot it and be instantly drawn to it – it looks like something off a movie set, all 1950’s nostalgia and Art Deco-inspired styling.  We hadn’t yet done a proper roadside diner on our US travels so the decision to go in was easy and instantaneous. The interior was exactly what you’d expect a diner to look like – booths along the back wall with blue vinyl-covered seats, country & western music playing softly on the stereo and a waitress wearing an apron and calling you “darlin'”.  The pastries in the display fridge by the entrance were gargantuan, as if they had wandered into Area 51 and emerged as super-pastries, somehow boosted by alian powers! 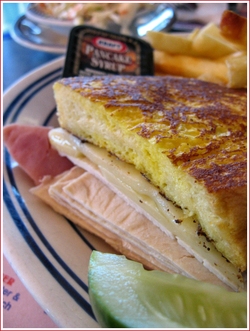 But we were after delights of a more savoury kind, so we checked out the extensive menu.  It covers all bases – from diner favourites like burgers, corned beef sandwiches, club sandwiches or mac ‘n cheese to blue-plate specials (daily changing full meals at low prices), to (bizarrely) Greek specialities.  I soon settled on something that I hadn’t heard of until Elizabeth mentioned it to me ages ago during the course of the EoMEoTE:  a Monte Cristo sandwich.  Do you like French toast?  Do you like grilled cheese sandwiches?  Together?? In that case, just go out and get yourself a Monte Cristo sandwich! It’s basically slices of turkey, ham and Swiss cheese sandwiched between thick slices of French toast – and if you’re lucky like me, there may be some maple syrup on the side (also coleslaw in the background and a fantastic fresh pickle in the foreground…).  You can just taste the calories and with each bite you can see little happy cellulite cells dancing a jig on your upper thighs.  But damn, it is delicious.  (In case you are wondering about the odd name, the sandwich first appeared in the US in about the 1940s and is thought to be an adaptation of the classic French croque monsieur – Monte Cristo is also thought to be a corruption of the name.)  I must say that I fell in love with the conforting softness and great sweet/savoury combination of the sandwich:  Nick’s burger was good, but my sandwich was transcendental.  I realise that we experienced the tiniest fraction of what was on offer at the Blue Colony, but based on what we had, this place is a haven of excellent and unpretentious diner cuisine.

After squeezing back out through the door and rolling through the parking lot to our car, we set off again down Route 7 and back to Westport.  The area is really lovely area to drive through – all these valleys ablaze with fall colours and houses hidden amongst the trees, making you wonder what it might be like to chuck it all in and come and live in the wilds of Connecticut.  By the time we got back to Westport, we weren’t in the mood for dinner out, so we decided to cook dinner at home.  Actually, this was probably just an excuse for me to go to Trader Joe’s – I love, love Trader Joe’s and we don’t have them in London (although we finally have a Whole Foods in London).  So after a bit of gawking and a bit of shopping, including my absolutely beloved soy, flaxseed tortilla chips, we headed home for a gnocchi in front of the TV and an early night in preparation for our departure the next morning.

And for your viewing pleasure, here are some gratuitous fall colour pictures taken that day! 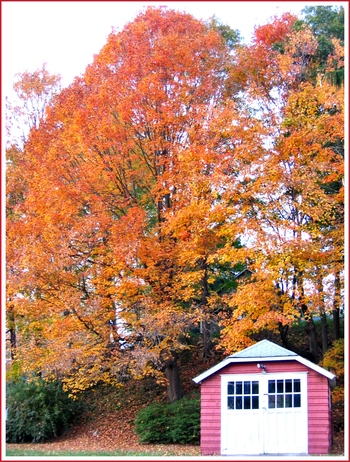 New York, Day 3: The Empire State Building and beyond

New York, Day 2:  Luzzo’s and the quest for the perfect pizza