The Eggy Enquirer has once again fallen “fowl” of the law by running the article pictured on the left.  A spokesman for Toast yesterday delivered a prepared statement from Toast himself, indicating that legal action against the newspaper was pending.  According to Toast, the alleged “revelations” by former PA Maple Syrup are “absolute poppycock” and “just a bad yolk”.  Furthermore, Toast took a swipe at the reporters who have been camped outside his mansion where he has been cooped up since the revelations hit the press, saying that they had caused undue distress to both him and Canadian Bacon, who has since checked into a celebrity clinic suffering from anxiety.

But it was a case of out of the frying pan and into the fire when Toast’s latest conquest Coddled Egg was seen leaving the Toast Mansion via a back entrance, heavily disguised as an Easter egg, while Bacon is still at the clinic.

Nevertheless, Toast has insisted that the Press Reggulator should investigate the Eggy Enquirer to see if any privacy laws were violated in the process of hatching their story.

Below is a picture of Toast and Bacon in happier days, together on the red carpet at the premiere of his movie “Petit Dejeneur“. 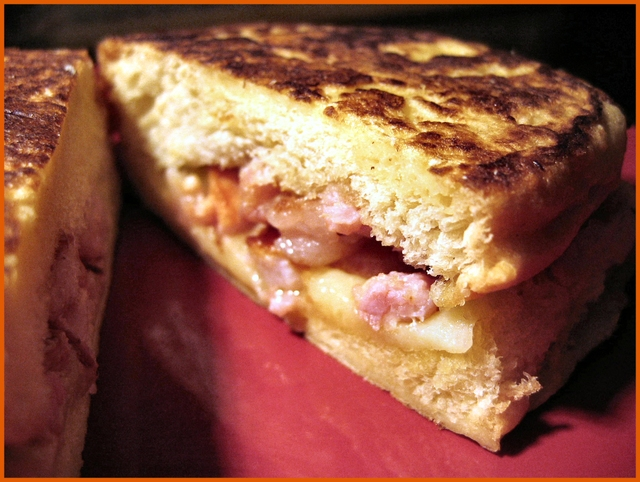 at least a cup of grated Cheddar cheese

Cut a deep pocket in one side of each slice of bread.

Fry the bacon till beginning to crisp.

Fill the pocket in each slice with 2 rashers of bacon and a generous amount of cheese.

Dip each slice of bread in the egg mix and fry in a pan with a little butter until golden brown on both sides.  Serve hot.