When I was at school and just starting to learn Rudyard Kipling’s classic poem If, my mom told me a story that tickled me pink and that I think of to this day every time I see Kipling’s name.  It went like this:

She:  I don’t know, you naughty boy, I’ve never kippled!”

I only discovered years later that this was not an actual coversation, but the text from a saucy postcard produced by one Donald McGill, an English graphic artist who’se name has become synonymous with the particular genre of saucy postcars usually sold in English seaside towns.

Until recently, I could say much the same thing about cobblers.  Did I like them?  How could I tell, as I’d never cobbled!  Oh, of course I’d fooled around with a few crisps and crumbles, but that was just the usual college experimentation 😉  My cobbler cherry was, so to speak, still intact.  So what, I hear you ask, is the difference between these crusty desserts? 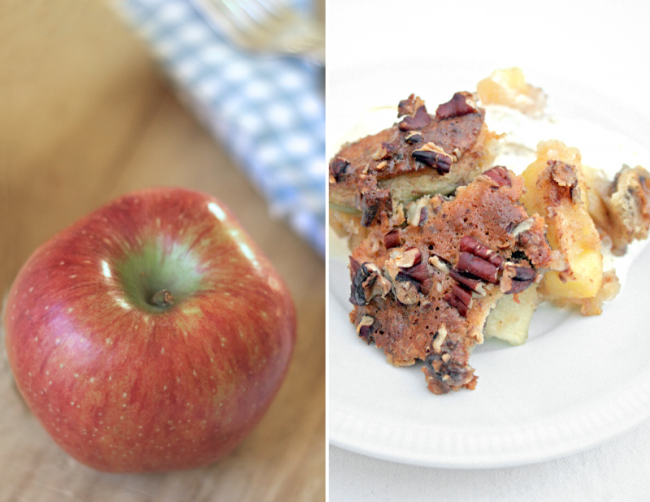 So as if it weren’t enough that the Brits and the Yanks can’t agree on a single measurement system, it seems they also both have a different take on what a cobbler is!  I had always pictured a cobbler as the British version, so I was quite surprised when the batter turned out to be far too sloppy to be described as scone-like.  I thought perhaps my oven was going to give birth to the bastard child of a cobbler and a clafoutis (a clafler?  A cobloutis?).  But in fact, it was an American-style cobbler.  And oh boy, was it delicious! The idea had been to use up the ton of disappointingly mealy Gala apples in the fridge, and it must be said, this is a fabulous way to use up less-than-perfect apples.  The initial sprinkle of sugar over the apples creates a caramelly sauce beneath the amber crust, and the pecan nuts provide texture.  In fact, it is probably better described as the lovechild of my self-saucing apple caramel pudding and a pecan pie ;-).  Guests at the lunch where I served this positively demolished the pudding – even those that don’t usually like dessert – and that’s always the best compliment in my book.

If you like this recipe, you might also want to try my apple caramel self-saucing pudding, apple and blackberry crisp, individual strawberry crisps, or my spiced plum crumble 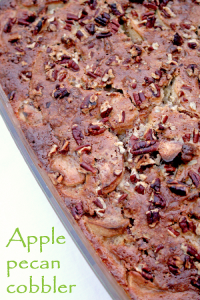 « An evening with Peter Gordon at GBK
Saturday Snapshots #100 »