You are here: Home / Recipes / Dessert / Spicy plum crumble in a flash So you’ve heard of speed dating?  I predict the next craze will be speed pudding.  Well, it will be in my house, in any event.  Old married ladies like me don’t have much use for speed dating 😉

Speed pudding happens when you’ve had a nice meal but you still feel inexplicably peckish.  Ice cream does not sound like it will fill the gap, and maybe (like me) you’re just not a sweets and chocolates person.  So… you simply head for the kitchen and make a pudding, speedily and from what you find lying about in the kitchen.  I have on occasion had friends staying and after dinner I’ve announced that I wanted to make pudding – who votes for chocolate and who votes for apple caramel.  Said friends would look at me nonplussed.  What – you have TWO kinds of pudding in your freezer?  Because surely a pudding is something you buy from Sainsbury’s and heat in the microwave or oven?

Au contraire.  Warm puddings are some of the most forgiving things you can make.  They don’t have to look stylish and delicate, and their ingredients are such that, even if things don’t turn out as planned, the result is usually edible 😉 Many of them can be made with store cupboard ingredients (like self-saucing chocolate pudding) or fruit that’s a day or two past its best.  And hardly any of them need to take you more than 10 minutes to prepare.

My favourite speed pudding of all time was when I was living in South Africa and Nick in London, and he called me one night asking “what dessert can I make with apples?”.  I was about to launch into a long explanation when he hissed “the guests are at the table – we finished dinner and they’re still hungry!”  No pressure!  And so I talked him through microwave stuffed baked apples which the guests were enjoying no more than 15 minutes later.

These days, it’s far more likely that I will wander into the kitchen and make a fruit-based pudding to accompany some late-night movie on TV for just the two of us.  Once again, friends will say “but it’s just the two of you!  Surely it’s too much trouble to make a pudding?”  But I dare you to try this recipe and rell me it’s too much trouble.  To me it’s more like a huge return for an embarrasingly small effort.

And the consequences are far less complicated than with speed dating 😉 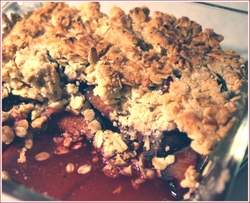 250g plums (about 4 plums depending on the size)

Pre-heat the oven to 170C.  Wash the plums and slice them in half to remove the stone.  Then cut each half into 3-4 pieces.  Remove the seeds from the cardamom pods and crush as finely as possible with a pestle and mortar.

Spread the plum slices over the base of an oven-proof dish.  Sprinkle with the sherry, half each of the cinnamon, cloves and cardamom.   Also sprinkle with half the sugar.

Rub the butter into the flour and remaining spices.  Stir in the oats, remaining sugar and spices and spread over the plums.  Bake uncovered for 40 minutes.

NOTES:  This is a great way to use up plums that are either slightly past their prime or were picked slightly green and never really improved.  (“Ripen in the bowl”? My ass!).  I reduce the amount of sugar in this recipe if the plums are sweet and fully ripe.  The sherry is optional but I think it makes for a more grown-up dish.  If you are not into spice, you can also reduce the spiciness by leaving out the cloves and cardamom.  Don’t leave out the cinnamon though!

« Amarula – South Africa in a bottle
The Baskerville, Shiplake »