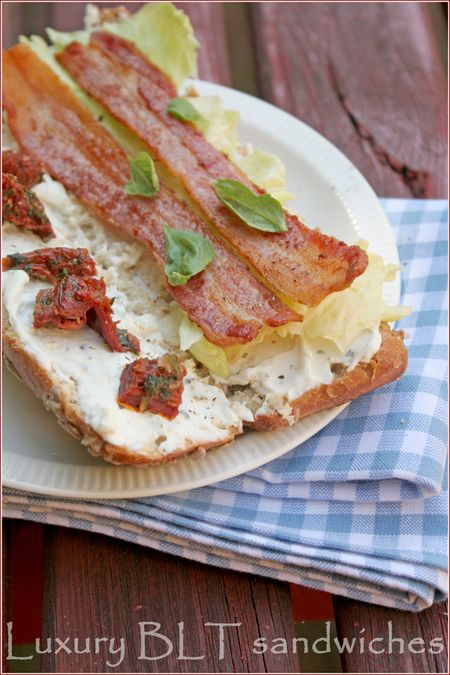 The time has come, the walrus said,
To talk of many things:
Of shoes and ships and sealing wax;
Of cabbages and kings.     –  Lewis Carroll

And, evidently, of BLT sandwiches, Denhay bacon and blog birthdays.

I attended a function at the Gourmet Burger Kitchen this week where I was asked (with some degree of awe!):  “Just how long have you been blogging?”.  And this was when I realised I had totally and utterly forgotten to mark my blog birthday last weekend.  Yes, folks, on Sunday CookSister officially turned six!  Six years of cooking, eating, writing, learning about food photography, and meeting the most wonderful people.

I would heartily recommend blogging to anybody.  OK, I have to admit that blogging has rather taken over my spare time, but on the other hand, it has given me the most incredible creative outlet, both for my writing and my photographs.  It has led me to some unusual experiences and places. And above all, it has meant that I have met and continue to meet the most interesting, passionate, funny, talented people from all around the world.  Not many hobbies you can say that about!

Over the past year, highlights have included:

– selling my photographs for the first time on Redbubble

– helping to edit, proofread and index the BloggerAid Cook Book in aid of the UN World Food Programme

Another perk of this food blogging lark is that people occasionally send you free stuff, and so it was that the lovely folk at Denhay sent me four packs of their bacon to try:  two West Country dry cure bacon (streaky and back) and two from their premium Spoiltpig range (smoked streaky and back).  All the meat for Denhay bacon is sourced from British outdoor reared herds which spend over half their life outdoors and then come into straw barns. For the Spoiltpig bacon, the pork is from Freedom Food assured herds. Their traditional dry curing technique involves a mixture of dry sea salt, nitrite and Vitamin C massaged into the pork loins and bellies which are then hung up to cured for between two and three weeks.  Selected loins and bellies are then gently smoked over beech or cherry wood.  The packs are all shingled, meaning the slices are fanned out – it’s a small thing but it makes it much easier to remove individual pieces of bacon from the pack. But the real difference between Denhay and cheap bacon becomes apparent when you fry it.  We’ve all seen the white gunk that cooks out of cheap bacon, and the way that it releases so much water that the meat ends up poached rather than crisped.  Well… that simply does not happen with Denhay bacon.  No white goo, and because there is no water the bacon actually crisps up properly.  The flavour is meaty and not too salty – my first thought was that it tasted like I remember bacon tasting as a kid! So far I have only tried the streaky and still have the back bacon and 2 packs of Spoiltpig  bacon to go – but I am already impressed.  It’s available at Waitrose, Morrisons, Sainsbury’s and Tesco.

To showcase the bacon, I decided to make something simple where the bacon is the star of the show – what better than luxury BLT sandwiches?  The secret with these is to use the best ingredients – good bacon, good bread and good lettuce. I chose to use cream cheese as a base, but you could just as easily use good mayo.  Either way, these sandwiches with their tangy sun-dried tomatoes, crispy bacon and sunflower seed rolls made the perfect blog birthday treat for me. Here’s to another six happy years! Split each roll lenghtways.  Spread each half with a generous helping of cream cheese and sprinkle with black pepper.  Shred the lettuce and place on one half of each roll.  Cut the sun-dried tomatoes into smaller pieces and arrange on the other half of each roll.