You are here: Home / Cooksister in the media / The big reveal – my famous cupcakes! 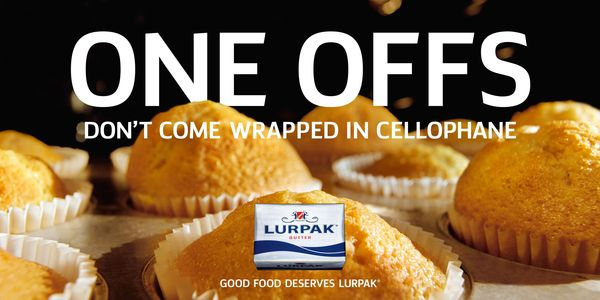 I teased you last week with my muffcakes post – and now it’s time for a correction and the big reveal.

First the big reveal – as you can see from the picture, my muffins are the new face of… Lurpak butter! They now refuse to get out of the oven for less than $10,000 🙂  Well, to be pedantic, they are one of the four new faces of Lurpak in its new 2010 outdoor media campaign, together with a lemon meringue pie, Helen’s chicken pie, and Mary-Rose’s roast chicken.  I believe there are two roadside billboards featuring my white chocolate and raspberry cupcakes quite close to my house, but have not been able to get there in daylight hours yet to get photographic evidence of my cupcakes’s new-found fame.  If anbody else spots them on a billboard or poster around town, could you pretty please send me a snap?  Would be wounderful to have a little scrapbook of them.  For when the cupcakes have all grown up and left home, you know 😉

And then the correction: after the initial Pdfs that I was sent showed pictures of my cupcakes together with a recipe for my muffins, the confusion has now all been cleared up and it is indeed the cupcake recipe that is now being distributed to accompany the cupcake pictures.  Hurrah! Confused muffcakes no more!

For your viewing pleasure, here are some pics of my muffin billboards around London! 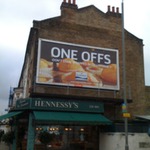 This one was spotted in West London by the ever-fabulous Mowie of Mowielicious. I snapped this one on the Royal Docks Road in East London near my house (Nick had to pull over into a disused off-ramp – the joys of being married to a food blogger!). This one is on the way to the eastbound Circle/Metropolitan/Hammersmith & City lines in the Liverpool Street Tube station.  That’s a normal size dorr next to it, to give you an idea of the scale.