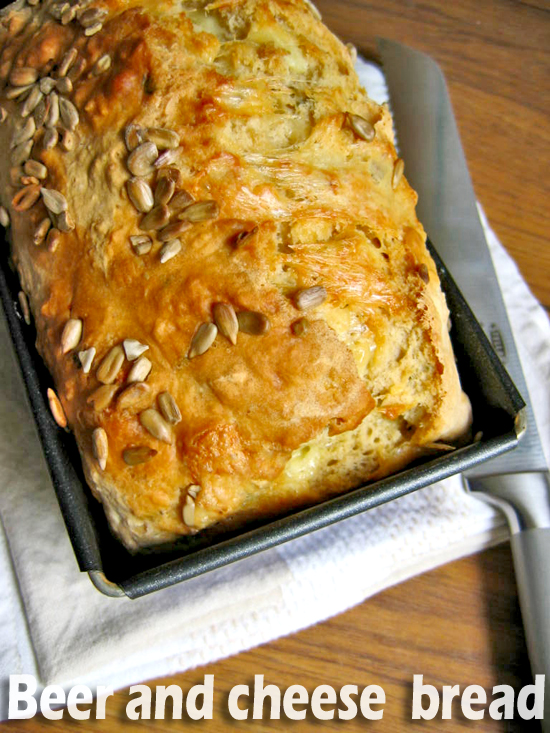 Bread.  The final frontier.  These are the voyages of the Breadship Cooksister.  Her mission:  to explore new loaves. To seek out new yeasts and new starters.  To boldly bake where no dough has gone before…

[wakes up from dream]

Who am I kidding?? Check out the recipe index on my site and tell me how many bread recipes you see.  I’ll tell you – a big fat zero!  I bake endless muffins.  I make a cracking quiche.  My cookies are much sought-after.  But somehow the bread thing passed me by.  Yes folks, I feel no need to knead.  In fact the only time I have ever handled live yeast and kneaded a loaf was under close supervision at the wonderful Cucina Caldesi Italian baking class (I must say that it was surprisingly unthreatening – but once I got home the urge to  bake mysteriously went away).

I blame my mother.  She was an enthusiastic cook all her life and pretty adventurous in the years that she was a stay-at-home mome, but she was also a Professor of Radiography and very active in her profession from about the time my brother and went to school.  When faced with the competing pressures of her profession, a husband, a large house and two young kids, she became an ardent fan of the “life’s too short to stuff a mushroom” school of cooking.  I can safely say that I never saw my mom kneading bread and I was not aware that such a thing as live yeast existed until well into my twenties!  But she was a fan of quick and easy bread recipes and I do remember one particular recipe that she would always make with homemade soup on a Sunday night.  I never knew the provenance of this recipe though.  And because her mom (my grandmother) died when Mamma was only seven years old, I presumed it wasn’t an heirloom recipe.

When I was last home over Christmas, one of the things I decided to bring back with me was my mom’s index book of recipes.  Some are handwritten (some even in my own hand!), some are photocopied, some are torn from magazines – many aren’t even stuck in, merely tucked.  And at the back of the book I found a document that didn’t seem to belong in the book at all – the minutes of a committee meeting of the Natal Branch of the South African Society of Radiographers, dated 1977.  I was about to throw it out when item four caught my eye.  The heading was “Matters arising from correspondence” and the item 4.2 read as follows:  “In reply to Memo 46, the Committee offers the following” – followed by the recipe for the yeastless, no-knead wholewheat loaf that I knew so well from many a Sunday night soup evening.  It reminded me so much of the way my mom and many of her colleagues cheerfully juggled family life with professional life and it made me smile because I see so much of that in me. Can’t fight the genes.

However, the recipe I offer you today is not that recipe – we’ll leave that for another time. 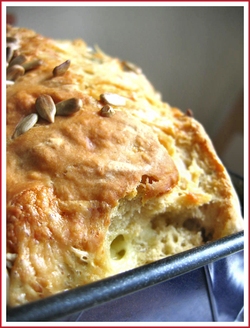 Seeing as braai season  has been in full swing at Chez Cooksister, what with the lovely weather we’ve unexpectedly been having, I thought I’d post something that goes well with a braai.  Those of you who remember my post on the great South African tradition of The Braai will recall that most of the cooking is done by the menfolk. This has traditionally meant that many of the side dishes are also reduced to their manly basics.  The beer bread recipe below was given to me by an ex colleague when I was still happily ensconced in academia – a red-blooded South African male if ever you saw one.  This bread was his showpiece at our annual staff braai and it is a keeper.  Preparation time is, oooh, 5 minutes and then you just plonk it in the oven and wait.  Could it be easier?

I modified the recipe slightly by adding the fresh thyme and next time I’ll sprinkle Maldon flakes on top. Oh, and I though I still had sesame seeds but then discovered I’d used them all up to make Bron’s chocolate oat and sesame cookies and I had to substitute sunflower seeds.  But otherwise it’s unchanged.  It makes a small loaf with a delicious chewy golden crust and a dense, cakey crumb.  The yeasty beer flavour (I used Budweiser) really comes through in the end product and the cheese adds a wonderful richness.  I was munching away on it over the weekend thinking ummm, this reminds me of something.  And then it struck me:  a cheese fondue!!  Bread.  Cheese. Beer.  It all makes sense now.

For other bread and bread roll recipes from food blogs, check out: 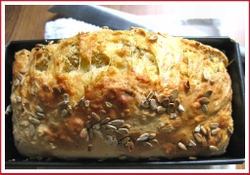 Pre-heat the oven to 180C  Grease a small loaf tin.

Sift flour and salt together in a mixing bowl.  Stir in the beer, cheese, water and thyme.  You can add a little water if the dough is too dry.  Mix until all the flour has been moistened and the dough forms a cohesive mass.

Transfer the dough to the loaf tin, sprinkle with seeds and Maldon salt and place in the pre-heated oven.

Test with a skewer after about one hour when the top is golden brown – if the skewer comes out clean, remove from oven. Serve with plenty of butter.

NB – leave to cool for 10 minutes or so before you slice!!  I was in too much of a hurry to get at that glorious-smelling loaf and ended up shredding one end in my haste 😉

This post was submitted as my entry to this month’s edition of Waiter, there’s something in my…  – the monthly themed cooking event hosted in rotation by me, Johanna and Andrew.  Check out Andrew’s blog for the roundup – and look out for my annoucement as your host next month!

And have a look at my bread made by Sam, another blogging South African in Australia.  She also makes a fab-sounding version using stout instead of lager, and that most top-secret of South African ingredients, brown onion soup/gravy 😉