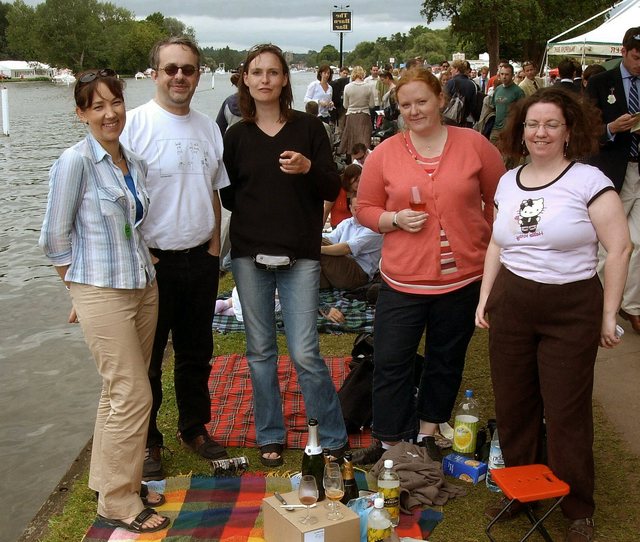 Remember our first London/UK food bloggers’ get-together over at Johanna’s?  Well, it was such a success and we had such a good time that we almost immediately started planning another.  I have cottoned on to the fact that summer in the UK is a fleeting thing, and you have to move fast if you want to take advantage of it, so I was keen to do something picnicky while the opportunity was there.  After some debate (and a lot of dire warnings from Andrew!!) I decided to invite everyone for a picnic on the banks of the Thames.  But not just any picnic – a picnic at the Henley Royal Regatta!

Now the Henley Royal Regatta is the only English event that we have attended every year since arriving in the UK in 2000 and I absolutely adore it.  It is probably one of the most prestigious world events for rowers and has been going since 1839 (the Royal sobriquet dates back to 1851 when Prince Consort Prince Albert agreed to become the event’s patron – since his death the reigning monarch has always agreed to be the event’s patron).  But it is also a fascinating, utterly English social occasion. To be honest, rowing is a bit of an elitist sport and it certainly attracts a very particular crowd of rather well-heeled English people and visiting international teams. Add to this the fact that there are certain tents/enclosures along the 2km course that enforce a dress code of blazers for boys and skirts for girls – and you have a recipe for the most perfect people-watching conditions imaginable!  Throw in a couple of picnic blankets, some food and some wine and you’re in heaven.

So, despite Andrew’s dire predictions that it was definitely going to rain, on Saturday 2 July a band of bloggers and their families & friends set off from their homes around London (and further afield!) and descended on Henley-on-Thames.  Our guest list included: 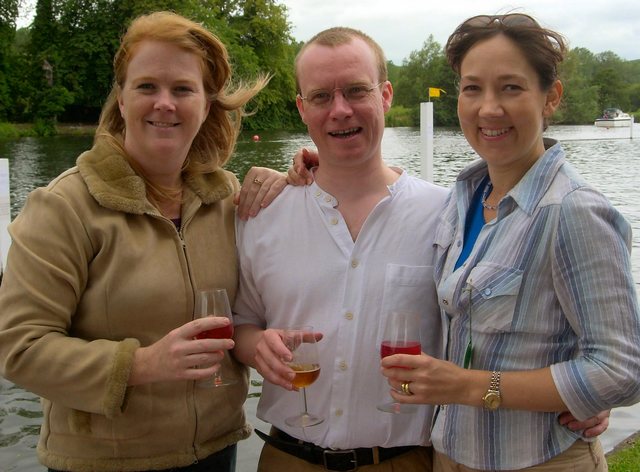 Our first order of business, once introductions were out of the way, was to spread out a picnic blanket exclusively for the food.  Now most people would spread out a blanket to sit on and the food would take up a small corner of that – but we’re not most people, we’re food bloggers 😉 So the food got a blanket to itself and we sort of hovered around the edges.  No wonder people were actually stopping and staring at (and some even taking pictures of!) our food.  You’d be staring too if you saw our spread… 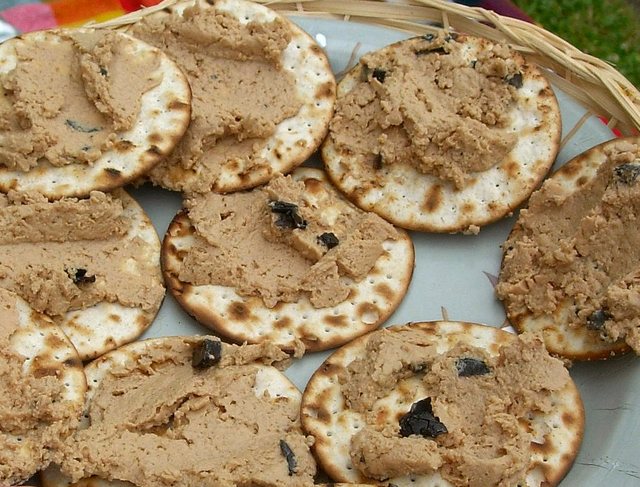 We started off with a plate of hors d’ouvres in the form of foie gras and truffle pate on crackers.  This came courtesy of Christina, but when I asked her where she got this fabulous stuff, she replied “Bahrain”.  So I guess I won’t be popping down to the corner store and buying a tin then!!  To accompany that, we had Andrew’s contribution (not pictured) of aperitifs containing Deakin Estate Brut NV sparkling wine and a choice of Funkin Puree fruit purees (I seem to recall peach, mango and strawberry??) – highly recommended!  After they were finished, we had to resort to the traditional Henley drink – a Pimms No. 1 cup. Pimms is a gin-based liquor containing various herbs and spices, not unlike Cinzano Rosso in taste, and it is traditionally mixed with lemonade, after which sliced orange, lemon, apple, cucumber and mint leaves are added.  The result is the rather delicious and refreshing drink you see in the jug pictured above – the epitome of an English summer beverage! 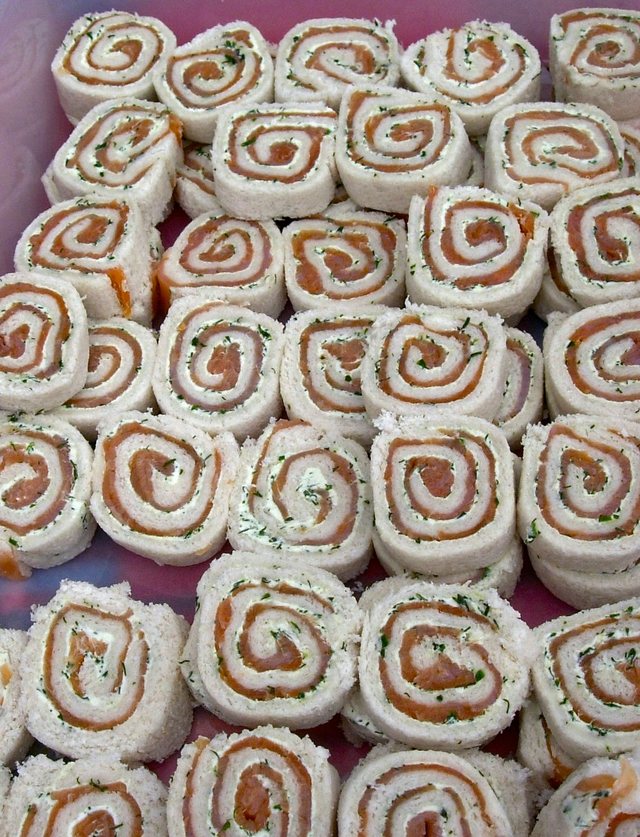 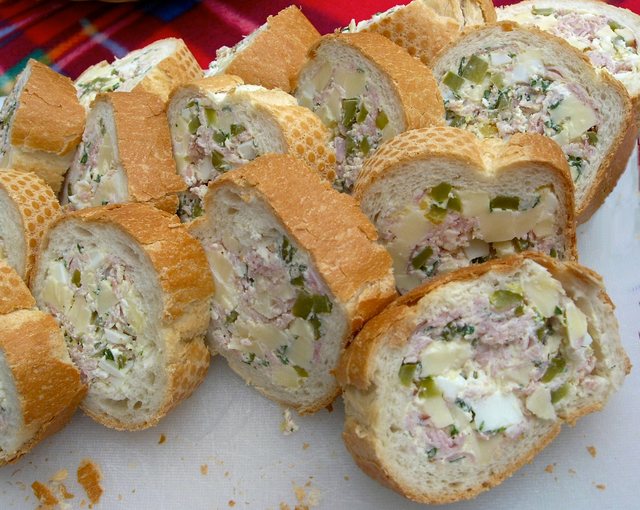 Next up, take a look at what Johanna brought: smoked salmon roly polys; an asparagus and bacon quiche; Jägerwecken (a baguette stuffed with ham, cheese, gherkins, parsley, cream cheese and boiled eggs); and round bread (pain cirque) stuffed with pastrami, watercress and a sauce of gherkins, capers, parsley, mayo and mustard (not pictured).  Phew! 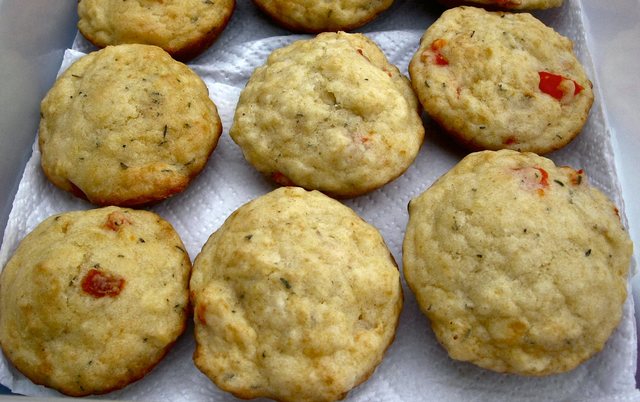 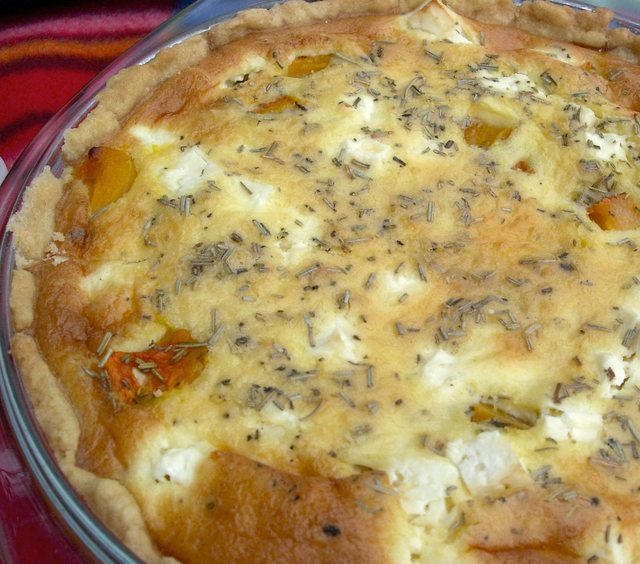 My contribution consisted of my now-famous peppadew and parmesan mini muffins (this time made with pecorino instead of parmesan) and a quiche I’d been wanting to experiment with for a while – a butternut squash, rosemary and feta cheese quiche – as well as various crudites and dips (Max loved the cherry tomato crudites.  Not to eat, but to unpack from and repack into their Tupperware container endlessly…  See??) 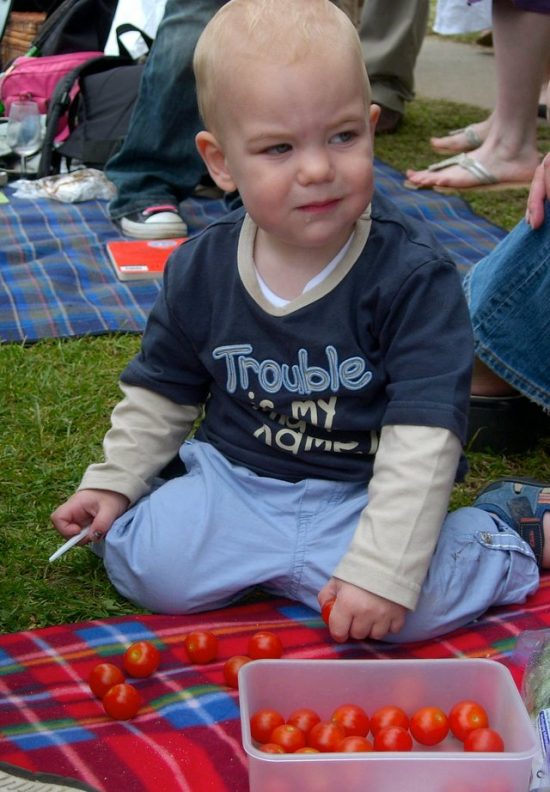 Also on the menu was Antony’s smoked mackerel pate (at my special request!) and Anne’s fantastic pickled herring (bohusmatjes) with Swedish crispbread. The herring was flavoured with spices that I would never have thought of adding to herring  – certainly not your standard dill, mustard or tomato herring!  In fact, the spices were more reminiscent of cloves, cinnamon and allspice – an unexpectedly delicious counterpoint to the fish. And to finish us all off there were Christina’s chocolate chilli creams – a decadent scoop of gooey chocolate with a kick of chilli – the perfect combination. 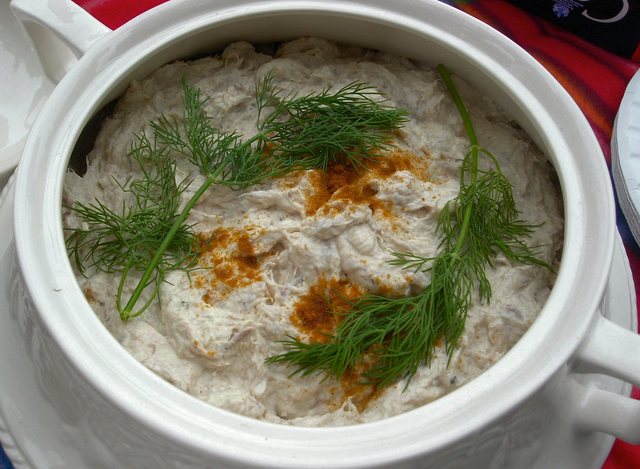 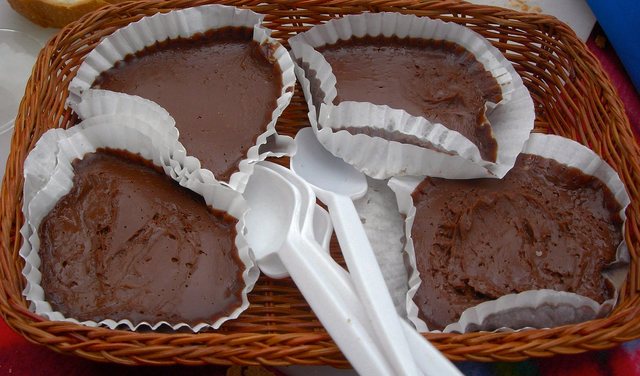 And so a very pleasant day was spent by everyone, lolling on our blankets, eating fantastic food and getting to know our fellow food bloggers.  I was just awestruck to hear that on the weekend before her wedding, Anne was joining us for a picnic.  AND she was catering the wedding herself!!  Very impressive.  Also found out that Christina can not only whip you up a mediaeval banquet – she can also make you some jewellery to wear to the banquet.  Multi-talented bunch, the food bloggers… Johanna’s daughter learned that hanging out with the grown-ups isn’t always deathly dull, and after watching a few races she announced to her nervous-looking parents that she will be going to either Yale or Harvard when she finishes school!  In between all the eating we also managed to watch the passing parade on the water – lots of hot men in lycra and the boat full of Elvis impersonators that visits every year, to mention but a few – and off (girls in beautiful frocks and boys in loud, striped rowing club blazers).  No better way to spend a summer afternoon!

And best of all, it didn’t rain…

Eventually the food was (mostly) gone and the rowing was (mostly) over and we reluctantly packed up and I had to roll my stuffed self back down the river to the station (pausing only for a glimpse of Chez Spittoon!).  But everyone agreed that the day had been a roaring success and that another get-together most certainly had to be planned for late summer. Toss the butternut cubes in olive oil and lay in a single layer in an ovenproof dish. Sprinkle with sea salt and rosemary and roast in a 180C oven until tender (about 20 minutes).  Remove from oven and keep warm.

Press the dough into a greased /non-stick ovenproof quiche dish or springform pan about 15cm in diameter.  Bake in the lower third of the oven for about 7 minutes, or until puffy and golden.  In the meanwhile, whisk together the milk/cream and the eggs in a bowl.

When the crust is done, arrange the butternut cubes and crumbled feta cheese on the baked crust, pour over the egg mix and sprinkle liberally with rosemary.  Bake on a rack in the middle of the oven for 15 minutes.  Then reduce the heat to 350F (175C) and bake for a further 10 minutes or until set.  I also turned on the grill for the last minute or two to brown the top a little.

[Roasting the butternut brings out is natural sweetness and it acts as a perfect foil for the salty feta cheese.  In fact, even people who profess not to like butternut enjoy this quiche…  This recipe is definitely a keeper!]