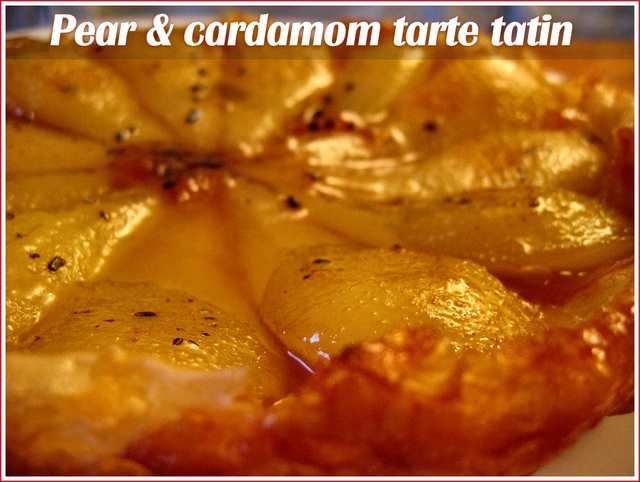 Synchronicity, n:  a meaningful coincidence; when disparate events unexpectedly come together perfectly.  Take, for example, a weekend earlier this year.  Disparate Event 1:  I had friends coming over for lunch and was pondering what to make for dessert.  Disparate Event 2:  I had read Johanna’s recipe for a savoury tarte tatin and was so keen to make it – but had no dish to make it in. Disparate Event 3:  I had glanced at the BBC’s guide to what was seasonal in January and pears were some of the only fruit to choose from.  Disparate Event 4:  I walked into my local supermarket which never stocks any decent cookware… and there was a Le Creuset skillet on sale – in grey to match my Dutch oven.

Add these all up and what do you get?  A blinding flash of light, the smell of brimstone and the instant realization that you are making pear tarte tatin for dessert when your friends come to lunch!

OK, so maybe not the brimstone bit…

But definitely the pear and cardamom bit and absolutely defintely the tarte tatin bit!

So what’s the big deal about a tarte tatin? 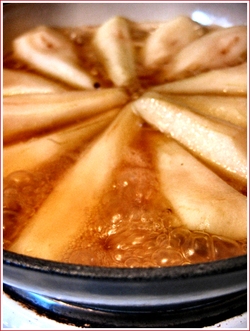 For a start, it’s one of those classic French desserts that you always think you’ll make someday.  And like carpaccio it is one of those dishes that has been shamelessly bastardised and adapted and has seen its name used to describe dishes nothing like the original.  Just as we collectively incorrectly assume that “carpaccio” is some exotic foreign term for “thinly sliced” (mea culpa!), we tend to assume that “tarte tatin” is a term meaning a caramelised upside-down tart of any description.  But in fact, the dish is named after the hotel where it was first made and refers only to that very specific apple-based incarnation, and I suspect that purists might get upset if they find the dish being bastardised…

The story goes like this:  Jean Tatin opened up the Hotel Tatin in Lamotte-Beuvron in France in the mid-1800s and upon his death in 1888, his two daughters Caroline and Stephanie took over the running of the business.  (By the way, the hotel still exists today and yes, they still have tarte tatin on the menu!)  While Caroline acted as a hostess to the guests, Stephanie found that her talents lay in the kitchen, and this is where she spent her days, rustling up her famous apple pie.  But varying legends have it that:

a) one day during the lunchtime rush, she started making a pie but forgot to put the filling in a crust.   Undeterred, she placed the pastry lid on top, baked it and then served it upside-down, like an open apple tart; or

c) she had to make all her tarts on the stove-top as she had no oven (not sure how the puff pastry cooks in this version…); or

b) one day she started making a traditional apple pie but got distracted and let the apples cook too long in the butter and sugar.  Having smelt the apples burning, she tried to save the dish by slapping a lid on it and finishing it in the oven.  To serve it, she decided it would be easiest to invert it as there was no bottom crust.

In all versions of the legend, the guests were surprisingly impressed with the tart and the “tarte Tatin” became the restaurant’s signature dish, with its fame spreading throughout the region.  But it is doubtful that it would ever have been as popular as it is today had it not been for one Louis Vaudable, the owner of the famous Maxim’s restaurant in Paris.  Word of this wondrous tart was brought to Paris by Curnonsky, a well-known writer and gastronome of the day and reached Vaudable’s ear.  Some versions say that he actually went to Lamotte-Beuvron and tasted this wondrous tart for himself, others say he sent He was determined to obtain the recipe and sent a spy chef disguised as a gardener down to Lamotte-Beuvron to obtain the recipe.  In either case, the tarte tatin ended up on the menu of Maxim’s in Paris and from there grew its international fame and popularity – from a regional speciality to a global superstar.

Legends aside, the area is apparently home to other similar fruit tarts made with pears and peaches, so I don’t feel too bad about a slightly unorthodox version that I present below.  The pear-cardamom combination is HEAVENLY and I will be using it again.  The spicy little crushed seeds took the edge off the sweet caramel and gave the whole dish an interesting depth of flavour that I really loved. And it looked lovely beyond compare, as befits an international star. 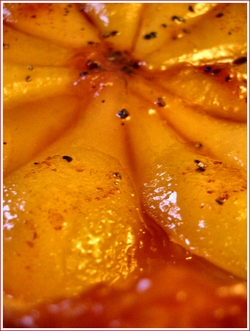 Method
You will need an 18cm skillet or ovenproof omelette pan (it must be something that can go on the stove as well as in the oven).  Preheat the oven to 220C.

Roll out the pastry on a lightly floured surface and cut out a circle of pastry that is slightly larger in circumference than your skillet/pan (you can use an upturned dinner plate to do this).  Lightly prick the pastry circle with a fork and chill it while you prepare the rest of the ingredients.

Using your fingers, press the softened butter into the base of the pan until it is evenly coated.  Sprinkle the cardamom sugar over the butter and set aside.

Mix the liqueur and lemon juice in a large bowl (add extra lemon juice if not using alcohol).  Peel each pear, cut it into quarters and cut out the core.  Toss in the lemon juice to prevent discolouring.

Remove pears from the lemon juice mixture and pack them in a tight circle in the frying pan, rounded sides down and thin ends pointing towards the middle. Press the fruit lightly down into the butter and place the skillet/pan over medium high heat.  If the pears shrink slightly as they cook, you may want to add an extra quarter or two.

Keep a close eye on the pan and move it around if some areas seem to be browning faster than others.  Once the sugar has caramelised, scatter the reserved cardamom seeds over the pears and remove from the heat.  Quickly cover with the pastry circle, tucking the pastry down the sides of the pan (but be careful – the caramel will be excruciatingly hot!).

Place in the middle of the oven and bake for 25 minutes until the pastry has puffed up and turned golden brown.  Remove from the oven and allow to rest for 5 minutes.  Then take a warmed servig plate, place it upside down over the skillet and carefully invert the skillet while keeping the plate firmly pressed to it.  Give it a good shake and the tarte tatin should slip out, caramelly juices and all. Serve with lots of thick cream.

As this was my first attempt at a tarte tatin, I was probably overly conservative about removing the pan from the heat – the sugar should have been left to caramelise a few minutes more.  Wait for the butter-sugar mix to go a really deep shade of brown before you lose your nerve and whip it off the heat. The part I was most worried about was the inversion of the fnished product onto a plate but this turned out to be easy peasy.  Just make REALLY sure you have a firm grip on both plate and pan/skillet before you flip over – splashing hot caramel all over yourself will result in the rest of the afternoon being taken up by a visit to your local hospital emergency room!