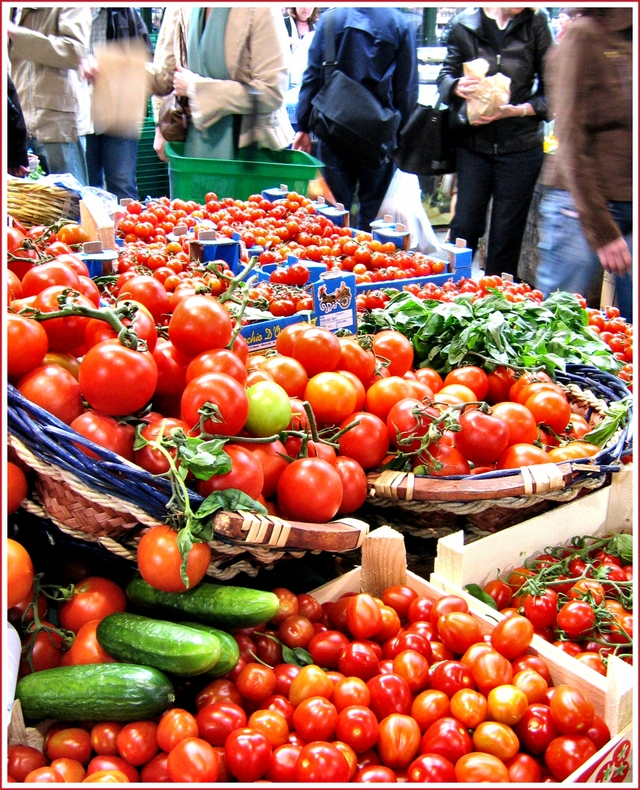 When Christina and I saw each other a couple of weeks ago at a (yet-to-be-blogged) tea at Johanna‘s we discovered that we would both be in London and at a loose end over Easter, and after about ten seconds of discussion we decided that this would be a great excuse to visit Borough Market again.  I don’t go to Borough Market nearly as frequently as I should and recently I have made only carefully-planned surgical strikes to buy specific ingredients before escaping the mass of camera-toting tourists and food bloggers and heading home.  So I was well overdue for a long browse and an orgy of picture-snapping 🙂

I won’t burden you with the history of the market – for that you can check the market’s own website.  Suffice to say (for the three people on the planet who have not yet heard its praises sung) that Borough market is probably the best-known gourmet food market in London and operates from atmospheric premises in the railway arches of London Bridge station, in the shadow of the beautiful Southwark Cathedral.  Although there is a fantastic range of fruit and vegetables available, together with market staples like fresh fish, meat and bread, the market is also known as a source of wonderful artisanal products such as cheeses, preserves, cured meats, cider and more.  It is a feast for the senses and the traders are generally more than happy to chat and hand out copious free samples, so it can really be a wonderful day out.

I also won’t bore you with a blow-by-blow account of what we saw and did – I’ll let the pictures do most of the talking, interspersed with my highlights. 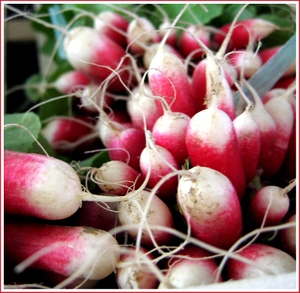 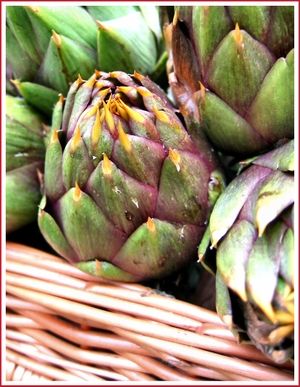 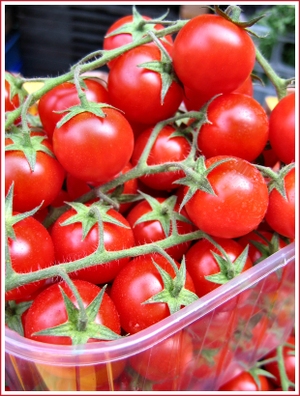 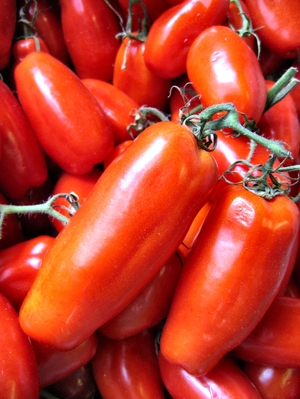 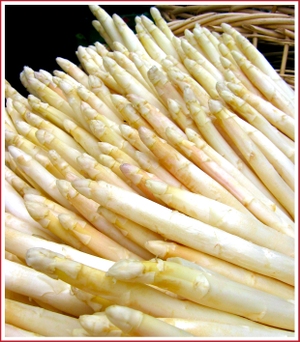 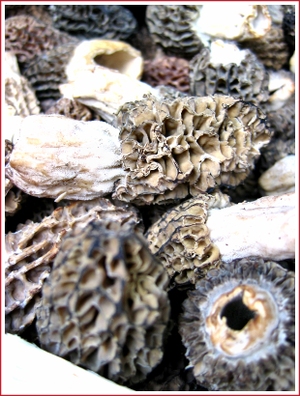 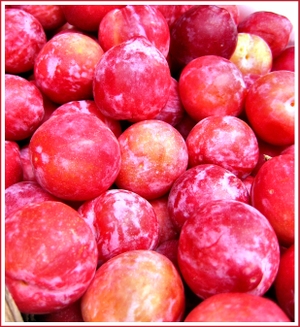 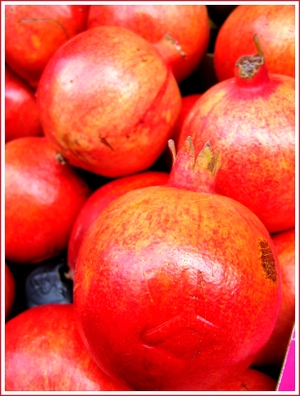 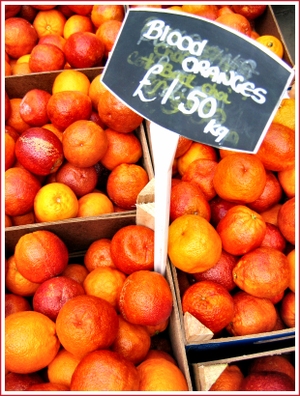 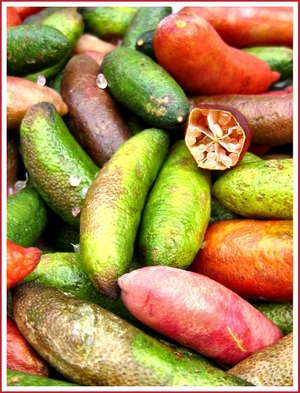 Our first port of call was the wonderful Booths Mushrooms fruit and vegetable sellers (opposite Brindisa) which,  as you can see from the photos above, was a feast for the senses.  There’s nothing like a visit to a market to see that summer is coming – there were mounds of absolutely gorgeous tomatoes in every shape and size – from the cute cherry tomatoes, to their beautiful elongated cousins pictured next to them, to gigantic beef tomatoes, all bursting with ripe redness.  There were stalks of red-green rhubarb (more of that in a later post) beside bunches of bright green asparagus and armfuls of their pale (slightly rude-looking!) white cousins.  Incidentally, white asparagus is in fact the same plant as green asparagus.  To achieve the pale stalks, the plants are covered in extra soil so that the stalk develops underground, far away from chlorophyll-producing sunlight.  Things you didn’t know you didn’t know.

There was a spectacular selection of salady stuff – every type of lettuce leaf you could hope for, those lovely little elongated radishes with their delicate shaded colouring, and a selection of fresh herbs large enough to satisfy a botanist.  The great thing is that you can buy just a handful of leaves of each if you wish – no need to buy a giant bunch of coriander and finding it mostly soggy and unusable in the back of your fridge a week later after the recipe called for only a tablespoon (or is it only in my house that this happens?!). We were mesmerised by the extraordinarily beautiful and spiky artichokes – to borrow a phrase, it was a brave man who first thought to eat one of those!!  And we were thrilled to find two very special items:  fresh morel mushrooms (pictured above) with their brain-like shape and distinctive musky smell; and right next door, a bag of marsh samphire which I have read about but never tasted (more of that in a later post too).

The fruit selection was no less entrancing.  I fell in love with a box of plums of the most wonderful cerise colour, sitting side by side with some pomegranates so perfect that they seemed to have been crowned queen of the fruits – look at the little crown atop the front fruit!  The blood oranges were ridiculously beautifully coloured.  You kind of imagine they will look like oranges but have red flesh, but these ones had the loveliest red blush to their skins too.  Just glorious.  But the main attraction (for Christina and I, anyway) were the Australian finger limes (lower right picture above).  These are the simply adorable fruits of the Citrus Australasica tree, a native of the Australian sub-tropical rainforest.  Although they are true citrus fruits, they really are finger-shaped and come in a lovely range of colours, from acid lime to dark red, calling at orange and pink in between – and the interior comes in a similar range of colours!  When the fruit is sliced open, it reveals a segmented interior very much like other citrus fruits, but the individual cells hardier are not as contained by membranes as in, say, a lime.  This means that the cells can be squeezed out and used as garnish.  The individual cells (or pearls, as they are called) pop deliciously in the mouth to release their tangy lime flavour – no wonder they are called citrus caviar.  I can imagine they would make a spectacular garnish for fresh oysters or any seafood canape (not to mention citrussy cocktails – just imagine colourful little pearls bouncing up and down in the bubbles of a champagne flute!)  I think I feel the urge for an oyster and champagne party coming on… 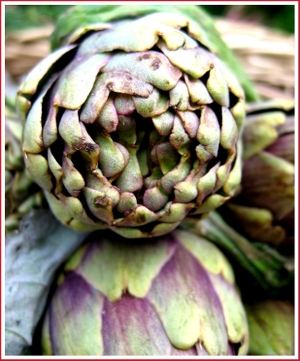 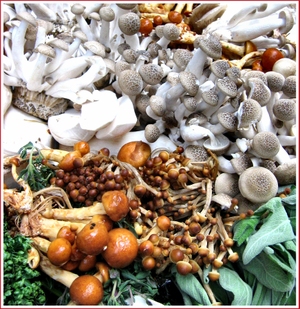 Over at Turnips (who have moved things around and put the tills more logically by the entrance/exit) , there was more of the same bounty – piles of asparagus and artichokes and tomatoes, and this rather spectacular selection of wild mushrooms.  If I did not fell so laden down with purchases already and fear for my ability to get them home sefely, I would have snapped them up for an exotic risotto!  Elsewhere we found bowls of avocados on sale for a pound – that’s five avocados for a pound – and they were buttery and delicious, which is more than you can say for the far more expensive specimens on sale in supermarkets. 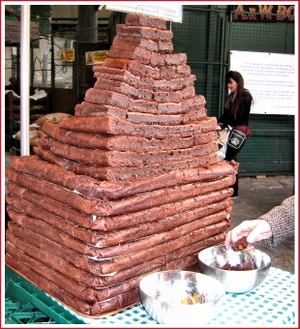 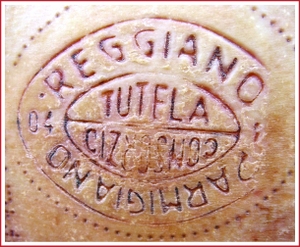 And just before you think we spent our entire visit in the fruit and veg stores – here are some pictures to prove otherwise.  This impressively huge brownie pillar looked extremely impressive but neither Christina nor I thought the brownies were anything special.  Still, it makes for a great photo.  Staying with the sweet stuff, we also discovered a stall (in the Christmas Market area?) selling truffled honey – hurrah!  I am shortly going to announce a date for a honey tasting at my house and this will definitely be on the menu.  In the same area we also found a charming gentleman who seems to be single-handedly improving the profile of linseeds (a.k.a. flaxseeds).  These little seeds are so, so good for you – rich in Omega 3 oils and great for your digestion but possibly not blessed with the most spectacular flavour.  However, the selection of flapjacks he had on offer could make a linseed-lover out of the worst sceptic.  I bought a golden vanilla flapjack and it was delicious – next time I’ll be back for the premium version with pumpkin seeds in it 😉  In the savoury department, we tasted some wonderfully creamy pecorino and I fell in love with these huge wheels of parmesan (pictured) as big as millstones.  This place is heaven for a cheese-freak like me!  We also checked out the fantastic variety of beers at Utobeer and I saw at least two beers that I very much doubt I’ll be trying anytime soon – quinoa and… banana.  Just plain wrong, if you ask me.  And right at the end of our visit, I paid a visit to Mid-Devon Fallow (where I got my venison goulash for venison pie) and bought a beautiful loin of venison, destined for a braai later in the weekend. 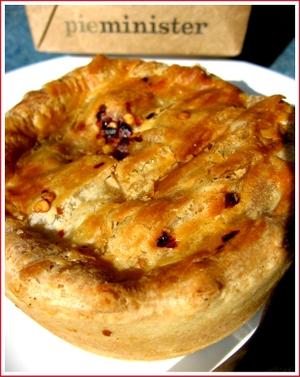 But no – wait – I made one more stop.  A couple of weeks ago we had some foreign visitors – an American rowing club to be exact.  Nick’s friend Larry and his club came over to row the Head of the River veterans’ race and afterwards we all went out to a pub in Mortlake to celebrate.  They proclaimed that they sourced their pies from Borough Market, from a company called Pieminister and seeing as Nick was in the mood for a pie, he ordered one.  His choice was the wonderful-sounding matador – beef, chorizo, beans, olives, sherry and tomato as I recall.  It arrived and I was instantly struck down with a sever case of pie envy!  So when I visited Borough, I was determined not to leave without a couple of Pieminister pies for lunch.  My research turned up the fact that the pies are all hand-made in Bristol from quality ingredients – free-range meat from traceable suppliers, fresh vegetables as opposed to frozen, and proper butter as opposed to hydrogenated fats.

The company started small in 2002 when chef Tristan Hogg and bar owner Jon Simon decided they could do a better job than any of the existing pie offerings on the market and the first pies were sold from a small Bristol shop in 2003.  In 2004 they were invited to become the first pie stall at Borough Market and their business has grown to the extent that their pies are served in pubs and restaurants up and down the country.  They do a core range of eight pies (including Matador, Thai Chook, Heidi – primary flavour goat’s cheese – Chicken of Aragon, and Wild Mushroom & Asparagus) as well as seasonal specials which last year included an apple, raspberry and cinnamon pie.  Yum.

What you see above is the Thai Chook pie I brought home for myself (Nick had another Matador), and you can pretty much tell by looking at it that the pastry is going to be good.  It’s crumbly and buttery and seriously good, particularly with those surprising little chile seeds that dot the top!  Inside there were actually (gasp!) visible pieces of chicken!  And cubes of squash!  And a delicious green Thai sauce!  It was just right in terms of spiciness and I adored it.  I see on their site that the pies freeze well too – so maybe it’s time for me to stock up in bulk.  Pieminister is yet another good reason for visiting the rather lovely Borough Market – I suggest you do so at your earliest convenience 😉