So… I have managed the unique distinction of being late for my own event!!  Aaarrrgh!  As I announced about three weeks ago, we are into the second edition of the sparkly new event “Waiter, there’s something in my…”, and in keeping with the chilly weather outside, the theme was chosen to be pies.  Now the funny thing about pies is that I like to eat them, but I never seem to make them – clearly it was time for a steep learning curve!  I did think briefly about making a double-crust pie and using the pastry that I normally use for my quiches as a base, with a puff-pastry lid.  But then I realised that I hardly have time to see my husband these days and that this was no time for culinary bravery beyond the call of duty 😉  So no double crusts here then.

The easy part was what to put inside the pie.  When I was at school, one of the big treat meals my mom used to make (infrequently) was a venison joint.  Now although people seem to think that South African boys all grow up hunting, fishing and generally running riot in the African bush, nobody in our family was ever much of a hunter, so we had to rely on the local butcher and his supply was erratic.  In fact, I don’t think I knew anybody that actually went hunting for venison until I met my husband.  His opening gambit in our relationship was to invite me over for a venison dinner as he happened to have a freezer full of meat from a recent trip – now how is a girl supposed to resist that?!  And clearly the trick worked as we’re still together, 9 years after our first date 🙂

But I digress.  At home, we did eat venison often enough that I developed a real taste for it.  My mom used to cover the venison joint in bacon and roast it for dinner, to be served with dried peach compote.  I used to think this sweet-savoury pairing was the most natural thing in the world until much later in life when I encountered people who don’t like the fruit/meat combination.  Apparently it is a very South African thing (see our raisin-flecked bobotie and yellow rice) and a culinary quirk that we share with middle-eastern cooking like tagines.  But the best was yet to come… The day after we’d had the venison joint (or maybe the day after that) my mom would make a meal of the leftovers, and more often than not this would take the form of venison pie or wildsvleispastei in Afrikaans (literally “wild meat pie”). The meat would be fall-apart tender from the slow roasting the day before, and she would chop it up together with any leftover bacon bits and peaches in a meaty gravy of its own juices before putting a pastry lid on it.  The smell would drive me totally insane with hunger long before the food was actually ready, and the taste was rich, spicy, meaty and sweet.  Heaven.

So when I was at Borough Market a couple of weeks ago and spotted some venison goulash, I didn’t think twice about snapping it up for a treat for me and Nick – and when this theme came up I knew immediately what the goulash would become!  My (excellent) venison was fallow deer [!!Bambi alert!!  Sensitive readers, don’t click!!] from a company called Mid-Devon Fallow.  The company is run by Peter Kent who sells venison products from his Keyethern Farm at Borough and can also be contacted on 01837 810 028.  Because I wasn’t cooking a joint into melting softness, I had to take the next best option – a great stew to use as the basis for a great pie.  The aroma as I was browning the meat was very very gamey – more like liver than meat – but very appealing when combined with the spiciness of the cloves.

And how did it turn out?  Oh. My. Word.  I was astonished at how much like my mom’s version this tasted, because I made up the recipe as I went along.  Clearly there is something to this genetics thing ;-).  The meat was very rich and the pepperiness of the meat and the added cloves made for a heady combination.  But for me the key to the overall fabulousness was the peaches.  Their sweetness had infused the entire dish and balanced the meatiness perfectly. Oh yes, and there was a light and crispy crust on top.  It was one of those dishes that you want to eat in teensy weensy little forkfuls just so that you can make it last longer.

Just like I used to do when Mamma made it. 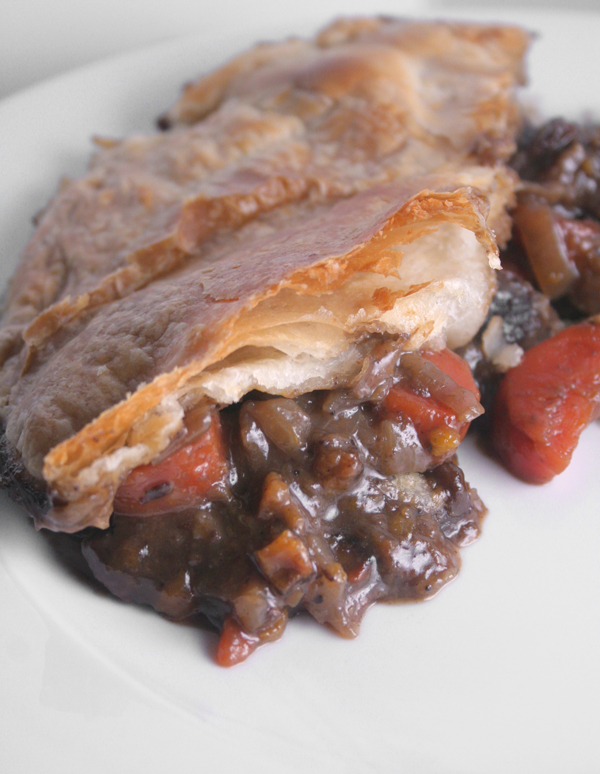 Marinate the meat for about 24 hours in a mixture of about 150ml red wine, a glug of olive oil and 1/4 tsp of cloves.

Remove the meat from the marinade and reserve.  Heat a little oil (I used grapeseed) in a large pot and fry the meat until browned on all sides, then add the onions and shallots.  Fry for another couple of minutes.

Add the beef stock, 150ml of red wine, the marinade, bay leaves, dried peaches, carrots and the rest of the ground cloves.

Bring to the boil and then cover the pot tightly, turn down the heat and allow to simmer for 3 hours or until the meat is very tender.  Much of the liquid should have boiled away by then, but if necessary, thicken the gravy with thickening granules.

Remove the bay leaves and transfer the meat, vegetables and gravy to an oven-proof pie dish (or in my case, to my beloved cast iron skillet!).

Roll out the defrosted (preferably room temperature) puff pastry to a thickness of about 4mm and use a plate slightly larger than your pie dish to cut a circular lid.  Place the lid on the pie filling and tuck in around the edges or use a fork to crimp it around the perimeter of the pie dish.  Decorate the top as desired.

Place the pie in a pre-heated oven at 200C for about 40 minutes or until the pastry is nicely browned.  Serve with green vegetables – mine paired nicely with garlicky sauteed leeks and courgettes.

**STOP PRESS**  The Waiter, there’s something in my… pie roundup has now been posted with an amazing 65 pie recipes featured!  Something for everyone.