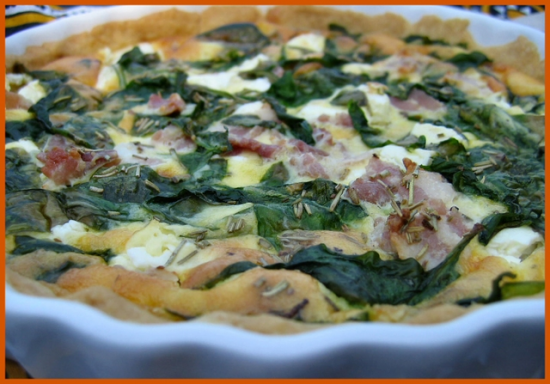 I didn’t grow up eating spinach.  It wasn’t like my mom cooked it and I was forced to sit at the table till I cleared my plate and ended up at the dining table for six months.  No, nothing as spectacular.  My mom just didn’t cook it.  I think part of the problem was that my dad wasn’t (and still isn’t) a great vegetable eater.  To give you an idea, after a trip to India he came back and started telling me and my brother that all lettuce was evil – practically poisonous – and had to be carefully picked out of any dish.  Also, salads practically weren’t allowed in our house.  Notwithstanding that we didn’t live in India and had access to plenty of clean drinking water in which to wash our lettuce.  I think he just thought “woo hoo! Here’s an excuse to get this yucky green stuff out of my house forever!”  He also holds the opinion that yoghurt should be avoided (“why eat live bacteria??”).  But then again, the man is 84, so it’s not as if he has to worry that his diet will send him to an early grave 😉

Anyhow, I digress. So spinach wasn’t really on my personal menu until probably the early 1990s when creamed spinach with feta cheese hit South African menus in a big way and I discovered that I rather liked it.  I remember that my absolute favourite pizza for a very long time was the Brutus from (sadly now defunct) Cranzgot’s restaurant in Port Elizabeth.  The Brutus consisted of a tomato and mozarella base, topped with generous lashings of creamed spinach, garlic, crumbled feta and bits of bacon.  OMG.  Heaven.  From there is was a short hop to loving spanakopita, ordering side orders of creamed spinach, and eventually graduating to loving spinach even when it’s not minced into an unthreatening green mush and smothered with feta cheese.

And I am not alone in this spinach fascination – spinach, feta and bacon is a very popular combination on South African restaurant menus.  I’ve seen it as a pizza topping, a jacket potato filling, a panini filling, a fish fillet topping, and poured (ill-advisedly) over a good steak.  So when I started pondering what type of quiche to make for this year’s picnic, my homesick thoughts naturally turned to these three ingredients.  The quiche turned out perfectly (always a lot easier than I remember) and tastes great both warm and cold.  Plus it freezes well – bonus!  And although the temptation may be great to buy the pastry, rather make your own.  It’s less hassle than you think and always a lot nicer than anything mass-produced.

a handful of baby spinach leaves

Press the dough into a greased /non-stick ovenproof quiche dish or springform pan about 15cm in diameter.  Bake in the lower third of the oven for about 7 minutes, or until puffy and golden.  In the meanwhile, whisk together the milk/cream and the eggs in a bowl.  Chop the bacon (if not using lardons) and gently fry until done but not crisp.  Rinse and dry the spinach leaves.

When the crust is done, arrange the bacon, crumbled feta cheese and spinach on the baked crust, pour over the egg mix and bake on a rack in the middle of the oven for 15 minutes.  Then reduce the heat to 350F (175C) and bake for a further 10 minutes or until set.  You can also turn on the grill for the last minute or two to brown the top a little.

« Guess who went to the Gherkin bar?
EoMEoTE#17 The End is Nigh: Shocking pictures, page 2! »