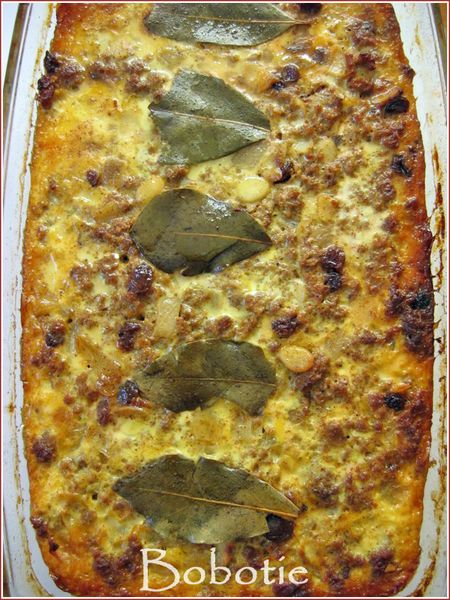 Today’s question on The Amateur Gourmet (which foods did you loathe as a child but come to like later?) made me think of a South African dish that I miss now – but actively avoided as a child!

Now I was clearly an odd kid. Most kids didn’t like olives (many of replies to The Amateur Gourmet’s question bear this out!) – they are briny, contain pips ideal for choking on and are generally not child-friendly. Me on the other hand, I was BORN liking olives!! My mom was fond of telling a story about how she and my dad took me along as a 2-year old on a “cruise to nowhere” (bunch of my dad’s radiologist colleagues cruising out of Cape Town, spending 2 days at sea & cruising back). The cruise wasn’t really for kids but the crew made an effort with me and produced some kiddie meals – I can only imagine the Vienna-sausage-and-fried-egg smiley faces. But I wasn’t interested. Not a kiddie morsel passed my lips. All I ate for the entire duration of the cruise was 2 big bowls of olives. Believe it… or not!! So what did I hate then? That staple food of mothers starting their firstborns on solids – bananas. Ugh. To this day, don’t bring them near me. I spat them out when I was a baby and I’ll spit them out now (unless they are cunningly disguised as banana bread or banana muffins…!).

But I digress. When I was about 5, my mother bought me the most fabulous book – Dr Seuss’s “My Book About Me”. Every page had something for you to fill in – your name, your age, your height, a drawing of your hand, the name of your best friend (still unchanged, may I add!), your favourite animal (a frog – hey, I told you I was an odd kid!) etc., etc.. There was also a bit about: “My favourite food is _____________. And please don’t give me any ______________.” So what did the 5-year-old me love most? That bland staple of bain-marie-served mass catering: chicken a la king! Who knows how a 5-year old’s palate works… And what did I detest above all? Bobotie (say buh-boor-tea). “Say what?” I hear the non-South Africans ask. The short answer is this: a curried mince dish of Malay origin, traditionally served on yellow rice with raisins.

Allow me to elaborate. When the Dutch, led by Jan van Riebeeck of the Dutch East India Company, arrived at the Cape in 1652 they found that to work the land they would need slaves, as the indigenous people were none too interested in slaving for the colonists. The first Malay (the term “Maylay” indicates Muslim belief and tradition, but not any particular place of origin) slaves arrived from Java and various Indonesian islands in 1658. These slaves exerted a surprisingly large influence on Afrikaans cuisine and language. Being slaves, the Malays often ended up in the Dutch kitchens and their influence remains apparent in dishes such as… bobotie. The origins of the name are not clear, but the curried spice, turmeric-yellow rice and the use of fruit in a meat dish are all indicative of this dish’s Malay roots. Incidentally, descendants of these slaves still live in Cape Town in the historic Bokaap (say “boor-carp”, or Malay Quarter) on the slopes of Signal Hill in Cape Town, where they originally settled. And by the way, don’t make the mistake of confusing the Cape Malay population with the Indian population of KwaZulu-Natal on the east coast – these are descendants of the indentured labour force which the British government authorised to be brought from the Indian subcontinent in about 1860 to work on the sugar cane fields. They have made their own rich contribution to the cuisine of South Africa, which will have to be the subject of another post.

And so at last we get to the recipe. There are dozens of variations – this one is was posted by Sean Borman, who obtained it from the Kaapse Tafel restaurant in Cape Town. If you are in a hurry and can’t be bothered to source all the spices, there is an easy way too – simply buy a Nice ‘n Spicy bobotie spice pack which comes complete with instructions and all the spices you need! Ideal for the lazy gourmet… and you can buy off the Net!

(Oh, and by the way, I now love bobotie – started liking it in my teens. And I have never figured out why I hated it so much when I was 5.)

1kg steak mince (or lamb mince)
1 large onion
1 tablespoon oil
1 thick slice stale bread without the crust (white)
1 cup milk (more or less)
1 tablespoon apricot jam
juice of half a lemon (you can add more if you like it less sweet)
10-12 dried apricots (optional)
2 tablespoons seedless raisins
15 blanched almonds (ie. with skin removed) -optional but adds the crunch
1 teaspoon curry powder (more if you prefer it stronger but the dish is meant to have a mild curried flavour)
1 teaspoon fresh ginger grated ( I am happy with a little more)
3 cloves garlic salt and pepper 6 lemon leaves (or 3 bay leaves as a poor substitute) -you could grate a bit of the rind of the lemon before you squeeze it for the juice and add it to the bay leaves but add carefully so as not to allow the lemon to dominate
2 eggs
milk

2. Soak bread in half a cup of milk. Crumble with a fork. Add to the mince. Mix well.

3. Place pot on stove. Add a little oil if the onion has absorbed it all. Put meat and all other ingredients except the rest of the milk, the lemon leaves and the eggs.

4. Mix like mad to avoid lumps. Cook until soft and cooked through, to the stage when meat is getting brown and not pink.

5. Be smart and use a slotted spoon to transfer the meat mixture to a baking dish about 5cm high as you will have to add on. Make sure you taste at this stage to correct seasonings. You can add more of any ingredients at this stage. Don`t taste too often as there will be little left for others!!!!

6. You will probably have some residual gravy in the pot. Reduce it by gently cooking without lid on and add to the baking dish. This makes the dish a little richer in flavour.

7. Now beat the two eggs. Add 1 cup of milk plus what is left of the milk in which the bread had been soaked. Total should not exceed one and a half cups. Mix well. Add salt and pepper.

8. Check that there is not too much water in the baking dish containing the milk. The meat should not be dry but there should not be any gravy at the bottom.

9. Pour milk and egg mixture after beating till well mixed on to the bobotie mixture. Place lemon leaves or substitute bay leaves & a little lemon rind on top.

10. Bake uncovered in moderate oven (350 – 375 F) for 30 to 40 min. Till the egg mixture has become set. Serve with a plain green salad or chopped tomato and onion, sprinkled with a little vinegar. Make sure you have some chutney near at hand. Serve piping hot with the yellow rice – see recipe below.

1. Heat oil a little,  then add rice and stir till coated.  Add water & salt, raisins & turmeric (watch for colour by adding a little at a time!)

3. over pot and simmer gently for 10 minutes on low heat.

6. When most of the water is absorbed. Switch off heat & let the rice swell.