You are here: Home / Recipes / Braai/Barbecue / Hasselback potatoes and the first braai of 2007 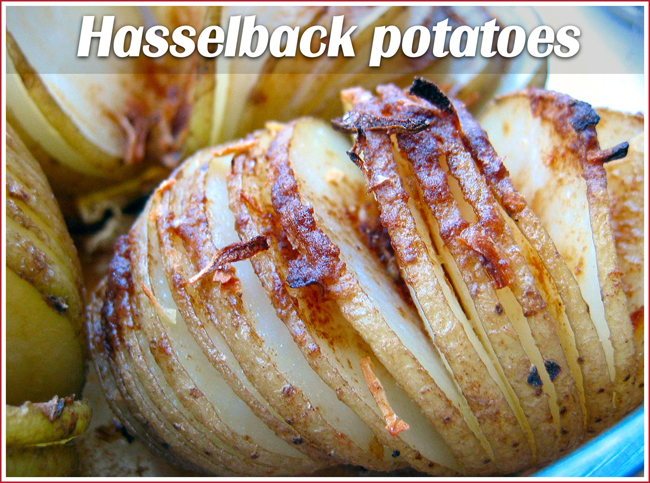 Since arriving in England, I have learnt that January and February are probably the worst months to be here.  Autumn lingers into November with wonderful crisp days and the smell of woodsmoke and the colour of the leaves.  Then it’s December with all the magic of the Christmas build-up.  And then January dawns and you’re broke and hung-over, and it’s still almost three months till the clocks go back to summertume and you can go home in the light.  The daffodils and crocuses haven’t poked their gorgeous heads up yet and the novelty value of infrequent snowfalls wears thin quite fast when it causes the entire public transport network to break down!  So there you are, trudging to and from work in the semi-darkness and fantasising that the weather will soon be getting better, but in reality it will be April before you see any real improvement.

But this year, owing to global warming or heaven knows what, we had an unseasonally mild spell in January.  Not crisp or sunny or anything – pea soupy and grey and damp, but mild, and I’m talking 12-14C mild!  So what would any red-blooded South African do in the face of such a climatic bonus?  Haul out the Weber braai and get ready to grill some meat, of course! I must say, it is the first time I have even been remotely tempted to braai in London in January, but we had the weather, plus we had a reason (a visit from another South African couple based in Ireland) – so it didn’t take long before Nick had the coals glowing and the meat sizzling.  The meat, by the way, was a deboned leg of pork, sliced into chops, much the same way that you would slice a rack of lamb into chops.  Something to remember for future reference! 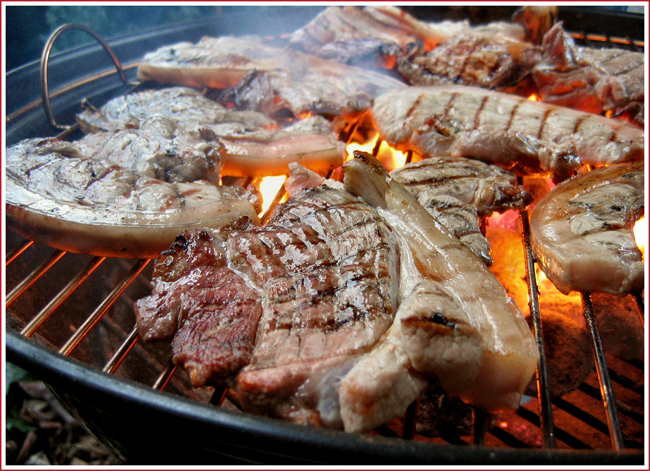 To go with this, I made a big tossed salad and asked whether everyone wanted a potato bake or potato salad.  One of our guests suggested hasselback potatoes which I learnt from my school friend Alison many years ago and hadn’t made in ages – but this seemed to be the perfect opportunity to make them again.  Now I had always thought these babies were called hackleback potatoes (something to do with your hackles rising?  Who knows!) and when I was Googling them today to find out about their origins, I came up with a blank.  The one result that did come up was “hassle back potatoes” (sic) – hahaha!  Yes, let’s put the hassle back into formerly easy potatoes! But following Google’s helpful suggested alternative spelling, I came across hasselback potatoes – and there they were, just like I remembered them.  The same thinly almost-sliced-through potatoes smothered in butter and baked till soft in the middle and crispy on the outside – oh baby, it’s been too long!!

Anyway, reading through the recipes, I noticed that a number of them referred to this as a Swedish recipe, so I did what every self-respecting “Who wants to be a millionaire?” contestant would do:  I phoned a friend! More precisely, I e-mailed Anne who sent back the following:

“Hasselbacken” is a restaurant – in fact, the restaurant who invented the recipe. (Or well, so the saying goes.) So “back” has nothing to do with baking – even though that’s what you do, of course. Hasselbacken translates literally into hazel hill – “backe” is a hill, whereas “baka” is to bake.”

Now that I didn’t see coming.  The recipe I learnt in South Africa in my teenage years is actually Swedish??  I’m amazed, but I guess not more so than Alison when she learns she’s been disseminating Swedish recipes 😉  There is, however, a slight regional variation to my recipe.  The Swedish version calls for the potatoes to be peeled and brushed with melted butter (possibly garlic butter) and sprinkled with breadcrumbs towards the end of the cooking period.  Another variation (Irish?? American??) names the dish accordion potatoes and calls for them to be brushed with olive oil (or butter) and sprinkled with breadcrumbs and cheese.  However, South African cuisine has a secret weapon and one that has already amply proved its potato-friendly credentials:  brown onion soup.  Yes – from a packet.  Don’t laugh!  It is the secret ingredient that sets South African potato bakes apart from their foreign cousins and the base that launched a thousand sauces.  And in the hasselback potato recipe that I learned, it is what you sprinkle on the the potatoes once you’ve smothered them in melted butter and let me assue you it’s goooooood.  You end up with potatoes that are soft and comforting and buttery at the base but coated in crispy onion bits in top.  Just fabulous!  They are easy (no peeling!) and great with braais (BBQs) but are pretty enough to serve at a more formal dinner too.  What more could one ask for? 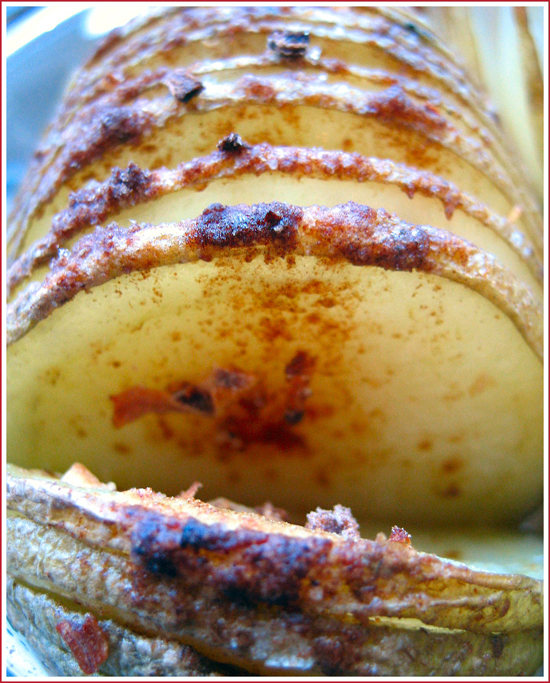 Slice the potatoes (skin on) as thinly as you can but do not slice them all the way through!  The potato should still retain an intact base  I always struggle with this, but Anne helpfully suggests placing them in a wooden spoon while you are slicing – the curve of the spoon will stop you from slicing through.  Thanks for the tip Anne :)).

Place the potatoes in an oven-proof dish which holds them fairly snugly.  Melt the butter and drizzle all the potatoes liberally with it.  Sprinkle each potato generously with the brown onion soup powder, making sure you get some on the skin and some in between the slices.

Place the potatoes in a pre-heated 200C oven (some recipes suggest loosely covering them in aluminium foil for the first 30 minutes, but I don’t) for about 45 minutes, basting frequently with the butter that collects in the dish.  Remove when the potatoes are cooked through and the topping is crispy.

(If you are trying alternative versions using breadcrumbs and/or cheese, you only add the crumb/cheese topping in the last 25 minutes of baking.)