You are here: Home / Recipes / Beef in Guinness stew 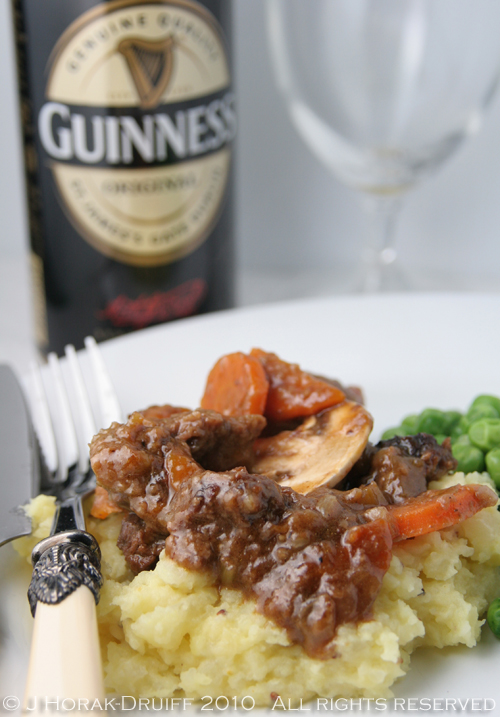 I was trawling through some of my old posts the other day and stumbled upon my Lancashire hotpot recipe, originally intended to be the first in a series of British dishes.  But, as you do, I got somewhat distracted and of course Part I was as far as we got.  At the time of writing, I had a pretty good idea if what the second dish should be – I just never got round to blogging it but when I made this dish again last Friday night in celebration of St Patrick’s Day, I decided that it was high time I wrote it up!

Now as I’ve said before on this blog, I’m all for cooking with alcohol (and I don’t just mean a glass of wine while I’m stirring the soup!).  I think wine, beer, sherry, whisky etc etc can immeasurably to the depth of flavour of a dish and apparently, I’m not alone:  Sumerian and Egyptian doctors had already agreed in about 1,700BC that cooking with beer was good for the health (of course, this prompted generations of unscrupulous merchants to marinate food heavily in alcohol so as to disguise the fact that it was inferior, not what the customer was paying for, or just plain rancid!)  There seems to be some debate as to whether beer can or cannot tenderize meat – some argue that because alcohol denatures protein, it will tenderize meat merely by its presence in the marinade.  Others argue that beer will no more tenderize meat than lemonade will.  You decide.

All I know is that if you cook something long enough and slow enough in alcohol, a) it will be meltingly tender; b) it will have become infused with the flavour of the alcohol you cooked it in; and c) the alcohol will have boiled off, so you can safely eat your coq au vin and drive home legally 😉 I have been making a variation on this recipe for years – in fact, it is probably the first main course that I started cooking for friends.  Of course back then, on a student budget, the dish was a little less upmarket.  I remember standing in a supermarket clutching the entire meagre budget for a student dinner party and trying to gauge which pack of brisket contained the least bone by weight (gotta get more meat for your money!!).  Why brisket?  Well, because it was the cheapest and because that’s what my mom recommended – and we all know that moms know best in these matters 😉 As for the beer, imported Guinness was way out of our budget, so by brisket in beer recipe was usually stewed in th golden can of goodness that is Castle Lager, and apart from the meat it contained precious little other than salt and onions.

One of the most memorable times that I made this was on a student holiday to my beloved Plettenberg Bay in about 1991.  Every year my brother and I would rent a (very very basic) holiday house for a week after our end-of-year exams in November.  Of course, there were always plenty of takers for the extra rooms, and on this occasion in particular I recall that one bedroom containing three single beds accommodated me, my boyfriend, my brother, his girlfriend, plus another couple – two to a bed.  Oh, and did I mention that two out of the six occupants snored so that the foundations rattled?!?  But we though this was actually pretty luxurious as there were people in the upstairs bedroom sleeping on the floor!!  And if memory serves, possibly also somebody on a mattress on the balcony…  Aaaaah, those halcyon days.  Such contentment with so little.

Anyway, on this occasion my brother and his friends had moved in a few days before my arrival, and by the time I go there they had been subsisting on a diet of beer, take-away hamburgers, charred braai (BBQ) meat, beer, hot-dogs, toast and beer for a few days.  I had promised to make them a proper home-cooked meal when I arrived and my arrival (armed with a cooler-bag full of brisket) was greeted with much enthusiasm!!  The kitchen (unsurprisingly) was poky and sadly lacking in sharp knives, so much cursing and hacking the brisket off the bones ensued.  But there was an enormous pot and copious amounts of beer, so in it all went for 3 hours while we played a very competitive game of quarters and savoured the smells developing in the kitchen.  After 3 hours, the population in the house had swelled to capacity (clearly, word had got out that a cooked meal was imminent!!), the level of bonhomie had risen considerably (aaah, the enduring power of alcohol!), and the stew was ready.

It wasn’t glamorous, it wasn’t haute cuisine, but I still have a photo of the pre-dinner toast that we drunk and you would struggle to find so many beaming faces around any table.  As my brother took his first forkful of the stew, his smile grew even broader and he proposed a toast:  “To Jeanne – that’s my sister!”.  It was and still is one of my proudest culinary moments.  Ever.

For more slow-cooked stew recipes, why not try making…

a little plain flour for coating

half a punnet of mushrooms, roughly chopped

600ml Guinness or other dark stout