You are here: Home / Waiter, there's something in my... / Twice-cooked oxtail stew 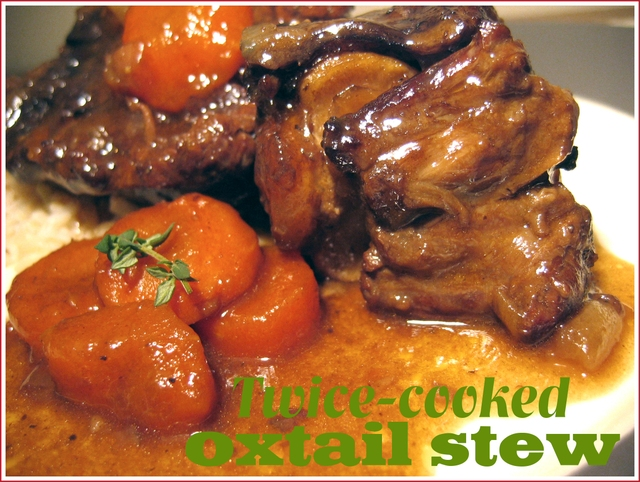 Aaaaah, there’s nothing to get the year off to a good start like a nice, new food blogging event! Particularly when it’s something that you helped to conceive, on a little scrap of paper over a lovely meal with good friends. And how co-operative of the weather to turn foul and cold just in time to get me in the mood for cooking something warm and saucy and comforting to fit in with this month’s theme of stews!

Isn’t it funny how tastes change over the years?  When I was a kid and my mom announced that dinner was to be some sort of stew, I would groan and moan and lose all interest.  Stews were, well, boring!  Far better to have crumbed pork chops every night 😉  It was totally inexplicable to me why my father’s eyes would light up with joy when he heard we were having stew.  And to him, the King of All Stews was definitely oxtail stew.  In fact, oxtail stew holds the distinction of being the only dish i have ever seen my father order two portions of in a restaurant – this probably happened 25 years ago and I still remember it, which gives you an idea of how unusual this was!  So given my father’s penchant for oxtail, it is hardly surprising that it is the stew I remember best from childhood.

At the time (we are talking the 1970s here), there was no “nose to tail eating” movement as there is today.  Cheap cuts of meat were just that – cheap and difficult.  There was no Fergus Henderson-style cachet to cooking them and they were very infrequent visitors on restaurant menus.  So I am still amazed at how regularly my mom cooked oxtail.  I suspect it had to do with the fact that she shared a flat with a dietician when she first got a job.  Money was tight and her flatmate taught her how to eat well on a budget – and oxtail was certainly a cheap and potentially delicious cut of meat.  Either that, or as a bone-obsessed radiographer, my mom could not resist the perfectly-shaped ox vertebrae that are left behind when the meat has been picked off 😉

But it wasn’t just in my family that oxtail was popular – most moms had a recipe for oxtail stew, and to this day, an oxtail potjiekos (say “poy-key-cause”) is a treat that few can resist.  In fact, a potjiekos is ideally suited to oxtail as it is a day-long affair.  Literally translated as “pot food”, this is a method of cooking where meat, vegetables and rice are simmered together over a fire in a traditional three-legged cast iron pot.  It originated when the Voortrekkers (Afrikaners who emigrated from the British-ruled Cape Colony in their ox-wagons in the 1840s and 50s) used to make camp each night on their trek into the interior of South Africa.  Dinner was whatever had been shot during the course of the day, together with whatever vegetables were available.  Each night, these were put in the pot and stewed until tender, with the larger bones being added to thicken the stew as their cartilage dissolved into gooey goodness.  These days, a potjiekos is a perfect excuse to spend five or six hours in the outdoors, sampling some fine local brew while pretending to pay close attention to a fire and a simmering pot.  And oxtail is the ideal meat for this because it can’t really be overcooked (provided the liquid is topped up) and thus drinking time is maximised.  What more could a man want?!

The stew I made on Friday was a cobbled-together recipe that is drawn half from oxtail potjie recipes, and half from oxtail stew recipes.  Sadly, my mom never wrote down her exact recipe (she probably thought it was too basic to warrant recording!), but the one thing I remember vividly from her oxtail-cooking days was the fact that we never ate the stew on the night it was cooked.  As a child, this always struck me as silly.  I mean, why spend all that time cooking something… only to put it in the fridge and then cook something else for dinner??  But Mamma would always say “yes, we could eat it right now… but just think how much better it will be tomorrow!”  I just put it down to general parental weirdness at the time, but now I see her point – you get double the simmering time if you cook it twice, meaning that the flavours really have time to develop and the cartilage dissolves into glutinous heaven.  Served on rice or mashed potatoes, you would be hard-pressed to get a richer and more decadent-tasting stew at the (very reasonable) price.

I got my meat at Borough Market, at the stall across from the greengrocers with the singing cashier – the name totally escapes me now.  Anyway, they tie up their oxtail in such cute bundles that are flat and can fit easily into freezer drawers.  Bonus.  I have never seen oxtail at a supermarket in London, so you probably woudl have to try a specialist market or your friendly local butcher.  I can’t recall the price now – maybe £5 for 8 chunks?  I remember it seemed pretty reasonable at the time, but then I bought it on the same day as an eye-wateringly expensive piece of beef fillet which would have made anything else seem cheap by comparison!  It is true, though, that you are paying for a lot of bone and not much meat, but because the meat is very fatty it is rich and goes quite far.  So without further ado, here is my recipe for twice-cooked oxtail stew, just like Mamma used to make. 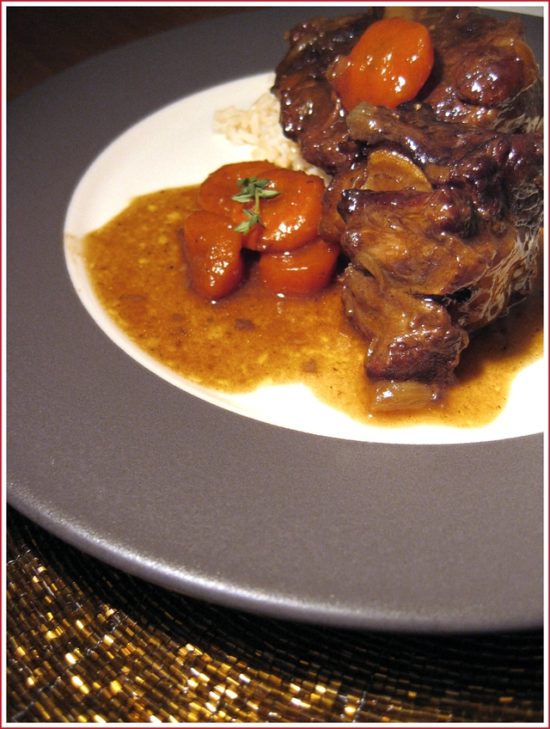 1 large oxtail cut into about 9 joints (this should provide 3 substantial, 3 medium and 3 small joints)

3 whole cloves (or about a teaspoon of ground cloves)

juice of one lemon

a dash of Worcestershire sauce

2 cups of beef stock or water

In a large heavy-bottomed frying pan, heat about 2/3 of the the oil then brown meat quickly over high heat together with the onion.  On another plate, start warming the rest of the oil in a large stew pot.  I started with the smaller pieces of meat and transferred them to a large stew pot when they were browned.  Add the carrots, celery, bay leaves, garlic, cloves, lemon juice, tomato paste, pepper and Worcestershire sauce. Add enough stock (or water) barely to cover the meat.  If you are using stock, you may want to go easy on the salt, but if you are using water the salt will be necessary.

Allow the oxtail to simmer with the lid on over low heat for about four hours.  By this time the liquid will have reduced but not by a great deal.  Remove from the heat, allow to cool, and if possible, put the whole pot in the fridge overnight.  The following day (or even the day after that), remove the pot from the fridge for about an hour to bring it towards room temperature.  Stir in the brandy and put back on the stove at low heat to bring it to the boil.  Allow to simmer for as long as you can – I gave mine another 3 and a half hours!  If desired, you can also add some potatoes about an hour before you want to serve, to make this a complete one-pot meal.  But I chose to leave out the potatoes and served mine on brown rice with steamed broccoli on the side. I also thickened the gravy slightly with thickening granules (less tricky than cornflour!), but that’s a matter of personal preference.

The taste is hard to describe.  Imagine the richest beef stew you have ever tasted, and imagine pulling chunks of meat off the bone using only your fork as it’s so tender. And then there’s the unctuousness of the gravy…  Because the ratio of fat and cartilage to meat is quite high with oxtail, there is a lot of gelatinous goodness that cooks out, making the gravy quite thick and making the meat glisten in a particularly appealing way.  Because of all this, a little goes a long way and after only three joints each, Nick and I were quite content to push our plates aside and relax on the sofa with the last of the sublime bottle of 1995 Welgemeend Douelle.

[I am submitting this to my friend Andrew for this month’s edition of the “Waiter, there’s something in my…” event – check out his site for the round-up tomorrow!  And remember, I’m hosting next month’s edition, so do check back here in the first week of Feb to see what the theme will be.]