You are here: Home / Recipes / Gluten-free / Pork and cider hotpot with prunes for a very English lunch 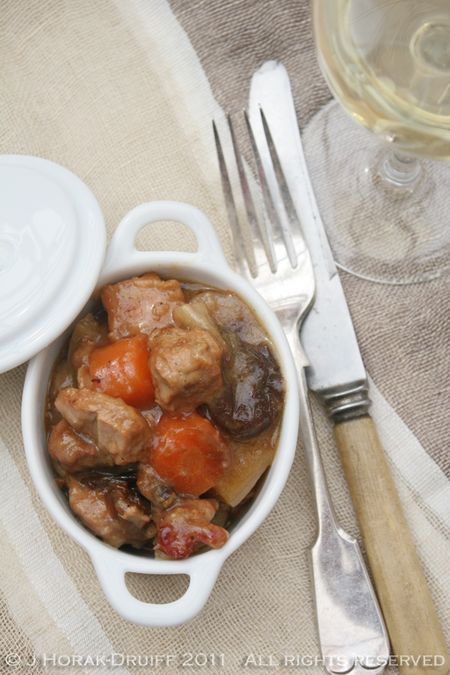 I once worked at a company where almost all the managers were expats.  One of them was an Austrian who had joined this (American) company years ago, moved Stateside, and then been transferred back to Europe to work for the London office of the same company. He was fairly sure of his nationality – he was Austrian.  His young kids, on the other hand, had Austrian parents, had grown up for a chunk of their childhood in the US, and were now attending school in London.  He often talked about wanting to give them a sense of home but struggling to figure out how to do this.  He realised that they were too young when they left Austria to feel conclusively that this was home, and he also knew that he probably would not be in the London office long enough for this to be home to them (he was right!).  He did, however, figure on being with the company for a substantial part of his career, so to give the kids an idea of home, every year they would return to the US city where they (and the company) had been based for Thanksgiving and Christmas. tp spend it with close friends there.  It seemed as good an option as any and, he reasoned, as long as there was a sense of continuity year on year and loving company, anywhere could fulfil the concept of home for his peripatetic kids.

I always find it fascinating to talk to people living like myself and find out where they perceive home to be and how they view themselves – as citizens of their new country or emigrés from the old one; or maybe some hybrid of the two.   For example, despite having lived here for ten years, having a red passport and holding the place in deep affection, I would never describe myself as English. I am always a South African expat and I carry my South Africanness around with me like an invisible talisman.  My cupboard still has far more clothes suitable for temperate Port Elizabeth’s 9 months of summer weather (skirts, sandals, strappy things) than for London’s 9 months of winter. When people in random foreign tourism offices ask me for statistical purposes where I am visiting from, I still automatically say South Africa.  And in a sense I count myself as very lucky: I think it must be a very unsettling thing, like my colleague’s children, to be unsure of where you are from or where to go if you feel the need to go home.   Much as I love living abroad and travelling and the sense of freedom that comes with knowing we can pack up and move to another country tomorrow if we find jobs, I find that all of the above is much easier for me because I know deep down who I am and what I am.  I am South African, and wherever I live, my perception of myself will always be refracted through that prism.  It’s a very comforting thought and a constant in an ever-changing world. One part of me that has taken to Englishness with great gusto, though,  is my palate.  In South Africa I didn’t spend a lot of time thinking about seasonal eating.  Our currency was never strong enough to allow mass imports of out-of-season fruits from other hemispheres, so I never really thought about the difference in taste between an in-season local or an out-of-season imported fruit.  But here in London, you can have strawberries, asparagus, Brussels sprouts, raspberries and all manner of other fresh produce for 12 months of the year, just flown in from wherever they happen to be ripening this month.  And believe me, it is only after you have tasted and compared an airfreighted and unseasonal strawberry to a fresh, ripe, local one that you realise the sensual importance of seasonal, local eating.  So since moving to England I have taken great delight in awaiting the arrival of my favourite fruits and vegetables in their natural seasons – hence my decision to serve guests at a recent lunch party English asparagus with a poached egg and hollandaise sauce as a starter; and Eton mess with English strawberries as dessert. Nick had been keen to braai for the main course, but in true English style the weather was predicted to be “unsettled” and right on cue it started raining the morning of the lunch – so I decided to go for something cooked indoors!  A peek into my pantry reminded me of something that another expat had sent me to try a while back:  some Orchard Pig farm-pressed Somerset apple cider and juice. Fellow-South African expat Graeme and his business partner have about 1,000 acres of historical orchards near Glastonbury in Somerset where they grow a number of aple varieties, keep some very happy Gloucester Old Spot pigs, and make a range of excellent apple cider and juices.  From medium to dry to mulled cider, to single-varietal cloudy apple juices (Jonagold, Falstaff, Bramley), to apple juice gently infused with the flavoured of ginger or elderflower – they make it all from their unsprayed orchards.

And I’m apparently not the only one who thinks their products rock: they have won a slew of awards, including Great Taste, Taste of the West, Made in Britain and Taste of Somerset medals.  We had already tried the elderflower and the ginger apple juice (both fantastic – perfect balance between sweetness and tartness and no chemically artificial taste) and had paired the very grown-up dry cider with the smoked salmon and avocado stacks that I recently made.  What remained was the single-varietal apple juices (that I want to taste side by side) and the medium cider.  The cider sparked a memory of a stew that I have not made for a couple of years and that includes cider, pork and prunes – the kind of thing that scents your entire house with the aroma of gently bubbling meat and spice while you chat to good friends.  Decision made!

As with most stews, there is no rocket science involved here, just a little patience – but if you take a little care with seasoning the meat properly before browning it and let the liquid reduce until it is a little gloopy, your patience will be rewarded a hundredfold.  As one appreciative lunch guest said: “What is it about cider that just brings out the best in pork?”.  Together with creamy mash and peppery  buttered spring greens, it’s the perfect dish to satisfy my anglicised palate. Place the flour in a sealable plastic bag and season generously with salt and pepper.  Chop the pork fillets into large cubes and place them in the bag in batches.  Shake until well coated and set aside.  When all the meat is coated, heat the remaining oil and butter in the frying pan and fry the meat in batches until browned. As each batch is done, add to the onion and bacon mix in the casserole and stir to mix.

Once all the meat is in the casserole, add the chopped carrots, bay leaf and rosemary.  Pour over the cider (make sure the meat is covered – add more if necessary) and stir in the mustard.  Cover and cook in the pre-heated oven for 1.5 hours.  Add the prunes in the last 30 minutes. Check for seasoning and add salt and pepper as needed – also stir in a little cornflour mixed with cold water to thicken the gravy if it is a little watery.

Remove the bay leaf and rosemary and serve on creamy mash with buttered spring greens.