Here at the tail-end of the English winter I am suddenly having cravings for casseroles and stews – warm, nourishing comfort foods that fragrance the entire house while they simmer away on the stove or in the oven.  I’m not sure if the sudden craving stems from the knowledge that I won’t feel like them so much in the warm summer months (we live in hope!), or from the fact that they only dirty one pot and hugely diminish the washing-up obligations.  Either way, the is the second one-pot dish we had in the space of a week last month and I’m hard pressed to pick a favourite.

Lancashire is an English county on the west coast, just north of Wales but just south of the Lake District and North Yorkshire.  The region has a long and varied agricultural and industrial history, which has resulted in a rich culinary heritage. The traditional dishes of Lancashire were often based on economical ingredients, producing cheap but tasty dishes that would keep hard working families well fed in the cold climate. Many regional dishes were inspired by necessity and were made using readily available local ingredients.  Like many places in England, Lancashire has a long history of coal mining, with the industry probably being at its peak in the second half of the 19th century.  At this time, the luxuries that we take for granted in the workplace (a coffee machine, a staff canteen etc. etc.) were unheard of, so the miners had to take their food into the mines with them in the morning if they wanted anything to eat at lunch!  It is said that hotpot was one such dish – the name originates from the time when the dish was prepared at home and the pot was wrapped in a blanket to keep it warm for a nourishing lunch the following day at work.  Apparently the middle classes later also caught onto this and hotpots were made to be taken, still wrapped in a blanket, to a day at the races for a warm and satisfying lunch.

No blanket-wrapped pots here though!  I’ll stick with sandwiches for work and confine my stews to dinnertime fare… This recipe is taken from the ever-reliable ASDA magazine and the only change I have made to the original recipe is to leave out the kidneys.  It’s a great recipe as you literally only dirty one pot (I cheated and added some carrots to the hotpot so that we wouldn’t get scurvy…) and another plus is that there’s no peeling of potatoes involved 😉  It also reheats beautifully so you can make extra and reheat it later. The hotpot smelt like a dream – think roast lamb – and looked exactly as it was supposed to with its crispy overlapping potato layer.  Next time I would leave this under the grill a bit to get the potatoes browner, but it was fine as it was.  And how did it taste?  Fab!  Because there aren’t tons of competing tastes, the flavour of the lamb really shines through, and the meat literally fell off the bones.  My only adjustment for next time would be to reduce the amount of liquid, as there was LOADS sloshing about on the plates.  Mashing up the bottom layer of potatoes did make the gravy pretty easy to eat though. 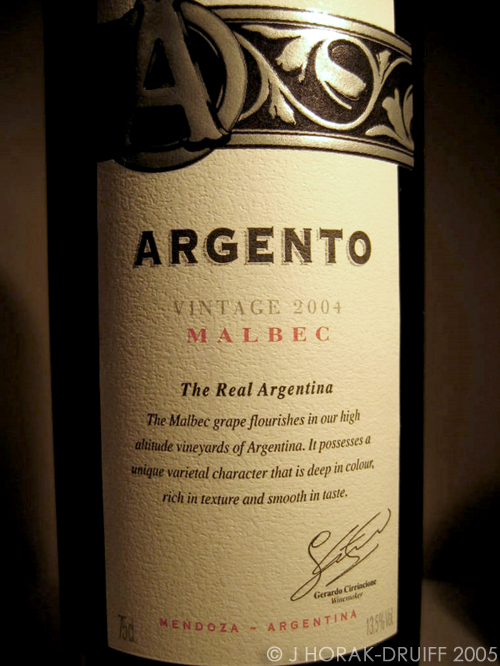 We paired the hotpot with a a 2004 Argento Malbec from Argentina, in keeping with my newfound love of South American reds.

Nose:  Big and spicy, almost port-like in its richness

Palate: Wow – what a huge wine!  It has a delicious creamy, mouthfeel as your mouth fills with the lush taste of cherries in brandy.  The oak adds a touch of vanilla but is not overpowering and the tannins are supple – not prominent enough to be harsh, but definitely providing some backbone to the fruit.  Extremely long finish and a proper “bell curve” of taste (in other words, the wine hits your tastebuds, swells to its full taste potential and then fades very gradually into a long finish.  This is the opposite of wines that overpower you with flavours at first, but within seconds it’s all gone.  No point in peaking too early!!).  In summary, this is a lovely, full-bodied red with good fruit and good structure that won’t break the bank.  Buy some and keep on hand for long dinner parties at home, or quiet evenings with a good book.

Other ideas for dishes using lamb: