You are here: Home / Recipes / Gluten-free / Boeuf Bourguignon for a happy new year – and a snowy day 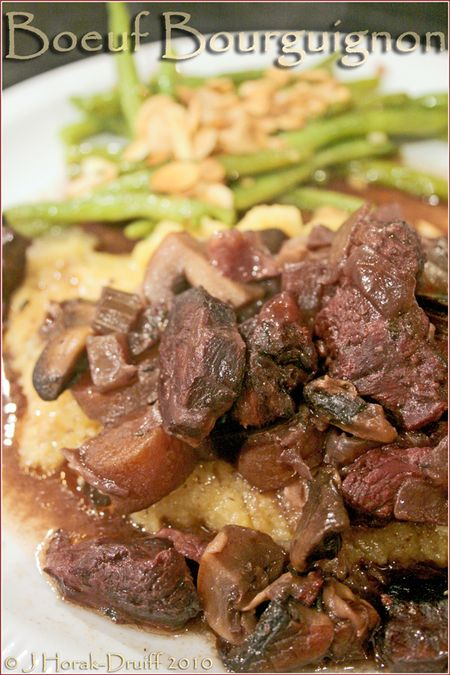 Well, there’s no denying it – it’s definitely 2010.  I know this because the calendar tells me so, because I distinctly recall a big party about a week ago with bubbly wine, and I’m sure some people in my garden were yelling “HAPPY NEW YEAR!” while fireworks went off in the background.  These are pretty convincing signs… 🙂

So how did you spend your new year’s eve?  It was only the 6th NYE that I’ve spent in the UK and although in the first few years the prospect of being far away from a warm beach on new year’s eve depressed me immensely, now it depresses me… fractionally less.  This is because I’ve had a few good NYE parties here on Mud Island – at Roger & Lesley’s; at Antony’s; and at Cecil’s.  However, the only memories I have of spending NYE at home in London are, shall we say, less than spectacular.  The year was 2000, I was on the verge of returning to South Africa for 18 months, the weather was foul, and we didn’t really have that many friends here yet, so nobody to celebrate with.  Nick and I had dinner (made in our old poky rented kitchen), and at midnight we stood under the power lines on a little hill in the sleet and watched the distant fireworks at Canary Wharf before going to bed with frozen toes. So forgive me if the prospect of NYE at home did not exactly elicit shouts of joy from me!! But… that was before we owned our fabulous new house where entertaining is a joy!  And so, despite the fact that we had entertained at Christmas, we saddled up again and invited people round for NYE. For Christmas I had gone all out and made fiddly dishes for each course (more on that in another post), so for NYE I thought it was time to give myself a break and make sure that I did not have much to do on the night.  I made the dessert (my mom’s sinfully delicious dark chocolate and Cointreau mousse) ahead of time.  The starter was a store-cupboard treat:  a foie gras entier brought back from Gascony last year, served with plum and ginger chutney and sourdough toasts (see below).  So that left just the main course to be decided.  Seeing as the top and tail end of the menu was taking on a distinctly Francophile flavour, I figured French was the way to go.  And although I did flirt briefly with the idea of coq au vin, in the end I plumped for a comfort dish extraordinaire:  boeuf Bourguignon, or beef Burgundy. Boeuf Bourguignon (beef stewed in red wine with pearl onions and mushrooms) is a standard of French cuisine and, like coq au vin, a dish which probably originated as a peasant dish designed to make the best of a tough, hard-to-cook cut of meat.  Although you can make it with more expensive cuts of beef, the long, slow cooking makes it eminently suitable for cheaper beef cuts – chuck steak, brisket and shank all work well (I used chuck).  Similarly, although you can spend a lot of money on the wine, any drinkable (as in, by humans!), robust red will be fine.  There are also various schools of thought as to the exact method of making it, some including overnight marinading and others not – in the end I chose the former because my meat was not the tenderest.  But if you are pressed for time, this is not essential and I’m sure other recipes will yield great results too. The recipe I chose to follow was Antony Worrall Thompson‘s, with very minor tweaks, like the addition of allspice.  It was a little fiddly, but once I popped the casserole dish into the oven, 90% of the work was over, giving me nearly 3.5 hours to do other things.  The resulting stew was fragrant and rich, with a deep flavour and fall-apart tender chunks of meat.  Mmmmm. On NYE, I served it on creamy polenta with a side dish of sautéed green beans and toasted almonds – heaven. And then on Wednesday came Britain’s big freeze (aka “Winter” in other parts of the world…) – as you can see the temperature inside my conservatory On Wednesday morning was a solid 32F.  That is, 0C and therefore colder than the inside of my fridge! I awoke to snow spiralling lazily down from the sky, which turned to cotton-woolly chunks as the day progressed.  I watched as the scene outside turned from looking as if somebody had sifted a gentle dusting of icing sugar all over it, to looking as if someone had thrown a thick, fluffy, white duvet over it.  And in the evening we watched the news rolling in of the massive disruption that all the pretty white stuff had caused.  Dinner definitely had to be something that did not entail a trip to the shops, but would be deliciously warm – leftover beef stew!  As with all stews, the flavour was even better on the second outing, and this time round I served it with crispy leftover polenta (cut/crumbled into chunks, fried in olive oil and sprinkled with Parmiggiano) and broccoli – and just like that, heaven was recreated.  Love in a cold climate indeed! BOEUF BOURGUIGNON/BEEF BURGUNDY (serves 6 cold, hungry people) Click here for printable recipe. Ingredients: 1.5kg/3lb5oz chuck or stewing steak, cut into 5cm/2in pieces 3 tbsp olive oil 1 large carrot, peeled and cut into chunks 1 large onion, peeled and cut into chunks 2 sticks celery, rough chopped 2 bottles red burgundy wine 2 sprigs fresh thyme 1 head garlic, cut in half horizontally 4 bay leaves 1/4 tsp ground allspice 50g/2oz unsalted butter 225g/8oz smoked bacon or pancetta 450g/1lb pearl onions or shallots, peeled 2 tbsp plain flour 375g/12oz mushrooms 290ml/½ pint beef stock 5 tbsp brandy freshly chopped flatleaf parsley (optional) Method: Heat 1 tbsp of the oil in a large saucepan. Add the carrot, onion and celery and cook for 2-3 minutes. Add the wine, thyme, garlic, 2 bay leaves and allspice. Bring to the boil and simmer for 15 minutes. Allow to cool. Place the beef in a large bowl and pour over the wine marinade. Cover and place in the fridge overnight. Preheat the oven to 150C/300F. Drain the beef from the marinade into a colander over a glass bowl. Reserve the marinade and set aside. Heat 25g/1oz butter and 1 tbsp of the oil in a large frying pan. Add the bacon and cook until golden and brown. Add the shallots and transfer to a large oven-proof casserole dish. Heat 1 tbsp oil in a large frying pan. Pat dry the cubes of beef from the marinade mixture using absorbent kitchen paper. Add half of the beef to the pan and cook until brown on all sides. Remove the beef and transfer to the casserole dish with the bacon, shallots and vegetables. Repeat with the remaining beef and add to the casserole dish. Stir in 2-3 large spoonfuls of the reserved marinade mixture to deglaze or remove any sediment from the pan. Pour into the casserole dish. Stir in the plain flour, the remaining marinade mixture and beef stock into the casserole dish. Bring to the boil, cover and place in the oven for 3-3½ hours or until the beef is very tender. Halfway through cooking, heat the remaining oil and butter in a large frying pan and cook the mushrooms until just browned. Add the brandy and cook for a few minutes. Add the mushrooms to the casserole dish, stir and return to the oven the remaining cooking time. Before serving, add the parsley (if using) and check how runny the gravy is – you may want to thicken it with cornstarch dissolved in a little water.