You are here: Home / Book reviews / Aubergine dengaku with miso and mozzarella from “Nikkei Cuisine” 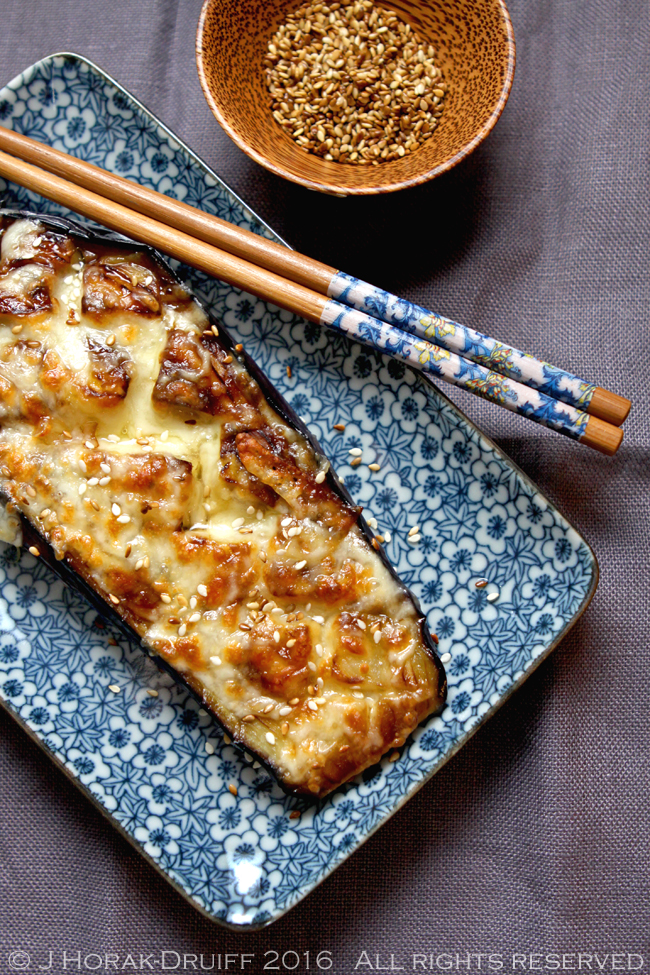 London is probably one of the easiest cities in the world in which to be an expat. I can guarantee you that if you do a snap survey on any given Tube carriage, well over half the people on it will have been born outside London – and many outside the UK.  It’s hard to imagine a city that can currently rival it as a melting pot of cultures, languages and (most importantly!) cuisines. In my hometown in South Africa, I do believe that there was nowhere serving sushi until the early 2000s and things like pho and ramen bars have still not arrived there in any meaningful way.  So you can imagine how my mind was blown when I arrived in London and started sampling all the delights that the world has to offer, in one city.  I dabbled in dim sum; frolicked in pho; delighted in dosas; and succumbed to ceviche. And then, all those years ago, I paid a visit to Nobu and discovered food for which I had no name.  It defied any sort of national classification, yet it made my palate sing with surprise and delight.  I had no idea then (along with the rest of London) that I was experiencing my first taste of Nikkei cuisine.

When people first hear about Nikkei cuisine, it is all too easily dismissed as just another fusion food fad: I know this was my reaction the first time somebody mentioned the idea of Japanese-Peruvian or Japanese-Brazilian food to me. But this sort of oversimplification  does the cuisine’s rich cultural heritage a disservice. You see, this is no faddish mingling of two disparate cuisines purely for effect but rather a fascinating and authentic hybrid cuisine that developed over decades and out of necessity. Nikkei cuisine is most commonly described as the food cooked by  Japanese emigrants and their descendants in Peru, Brazil and Argentina from the late 19th century onwards, and the word Nikkei originally meant a Japanese person born outside Japan.  You may be surprised to learn that the largest Japanese population outside of Japan resides in Brazil, and over the years the Japanese diaspora there has adapted the recipes brought from home (or learnt from parents) to the techniques and ingredients locally available in South America.  The result is a cuisine that contains familiar elements of like sushi and tempura but is rich in unexpected and exotic combinations of flavor and texture, plus it is for the most part healthy. So it is hardly surprising that Nikkei is hot news these days in London, with a number of popular restaurants like Chotto Matte, SushiSamba, Ceviche and UNI serving food that is heavily influenced by Nikkei cuisine. 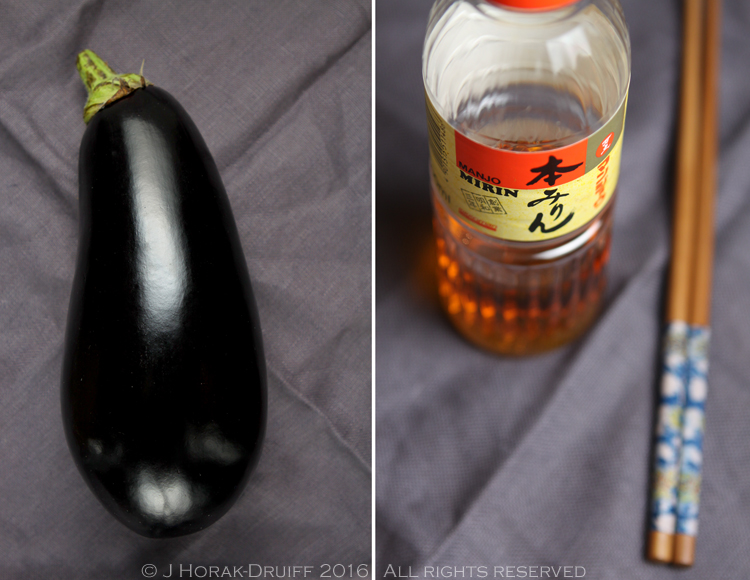 There are few better ways to experience authentic Nikkei than a visit to my friend Luiz Hara’s London Foodie Supperclub events. Luiz himself is of Japanese-Italian heritage and grew up in Sao Paolo, Brazil, immersed in Nikkei culture and cuisine from a young age. I can think of few better people to introduce you to this food and so I was thrilled to hear that he has published a cookbook on the subject, Nikkei Cuisine – the first Nikkei cookbook published outside Japan or South America. It’s a substantial tome at 256 pages and with over 100 recipes, almost all illustrated with beautiful full-colour full-page photographs illustrating Luiz’s gorgeous plating. I love that Luiz has included a section at the beginning about the history of Japanese people in South America and the story of how Nikkei cuisine developed. There are separate mini-sections dealing with some of the cuisine’s foundation techniques including how to make dashi stock; perfect tempura technique; and sauces/dressing. The recipes run the full gamut from sushi and tempura to ceviches and tiraditos with some mouth-watering dishes that defy classification like boneless short rib sliders with kimchi mayo; or Oreo and matcha cheesecake. There are also some dishes that regulars at Luiz’s supperclub might recognize such as tuna tataki with truffle ponzu; or salmon and passion fruit tiradito. Although the finished dishes look and taste appropriately cheffy, Luiz breaks them down into manageable steps that most home chefs would be comfortable trying. The only thing I would say is that the recipes in this book are generally not the type of dishes that you can decide to make at short notice with store-cupboard ingredients that you have on hand (unless your store cupboards are a lot more adventurous than mine). Many items like ponzu, yuzu, shimeji mushrooms and the like will require some advance planning and shopping (or a very handily located local Oriental supermarket!). But for the uninitiated, Luiz has helpfully included an index explaining some of the more obscure ingredients as well as a list of suppliers, mostly London-based. If you are looking for something a little different to add to your cookbook shelf that will broaden your culinary horizons a bit, this is the book for you.  Nikkei Cuisine is now available via Amazon and good retailers (RRP £19.99). So what does one cook when presented with such an amazing range of choices? After paging repeatedly through the book and lusting after almost every recipe, I decided to start with something fairly simple which I have had at one of Luiz’s supperclubs: aubergines with dengaku miso and mozzarella. Miso-glazed aubergine recipes are fairly ubiquitous on the Web – but I was intrigued by the addition of mild mozzarella cheese and I knew I’d loved it when I had it at the supperclub.  It’s also one of the fe recipes in the book that required no grocery shopping for me as I always have sesame seeds, oil, miso paste and mirin on hand.  The mozzarella is not the artisan kind – it is the ready-grated stuff that I’d usually walk right past in the supermarket – it’s needed for its meltiness and lack of powerful flavour in this recipe so don’t be tempted to go too upmarket! A couple of things to note: my sous chef (!) cut the stems off the aubergines before I could stop them. but do try to leave them on as they help the aubergine to keep its shape when cooked. Also, do’t score the flesh too deeply – just under a centimetre is deep enough to help the flesh cook and the miso to penetrate. Lastly, I found the dengaku miso a little to sweet for my taste so I have halved the sugar content and I used one rather than 2 tablespoons of water because my miso was more the consistency of soy sauce than a spreadable paste. The finished dish is a cheesy, umami feast – and it’s gluten-free, vegetarian and (cheese aside!) relatively healthy.  I can’t wait to explore this and this cuisine book further! 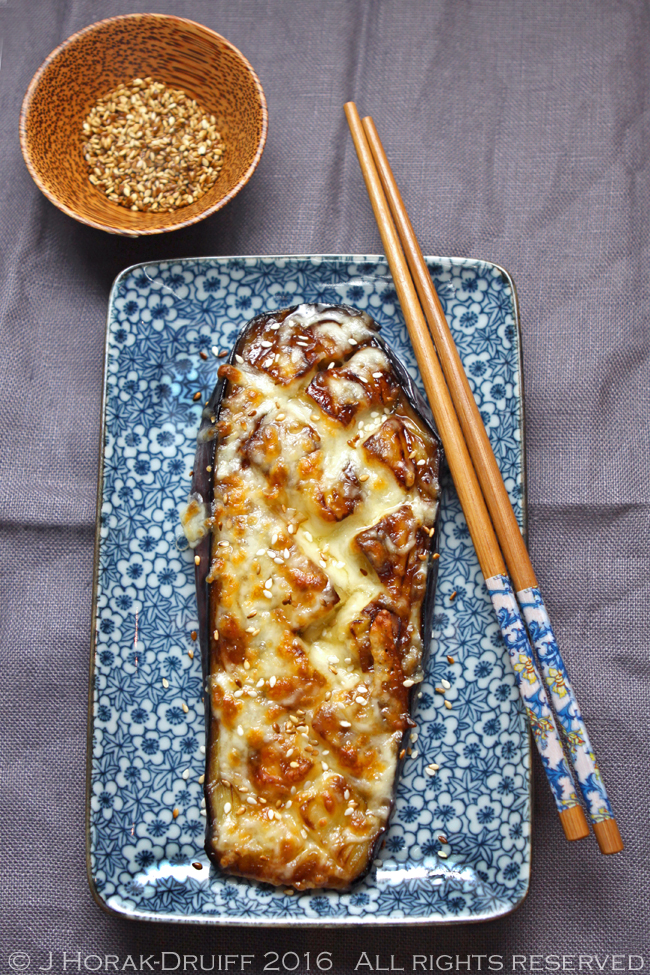 If you love aubergines, check out these aubergine recipes from other bloggers:

4.5 from 8 reviews
Aubergine with dengaku miso and mozzarella 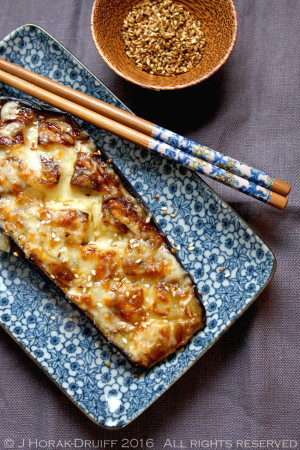 DISCLOSURE:  I received a complimentary copy of this book for review purposes but received no further remuneration to write this post.  I was not expected to write a positive review – all views are my own and I retain full editorial control.