When people hear that I am from South Africa, one of the first things they ask is “what on earth are you doing here?”.  It’s a fair question, in some ways.  I mean, Britain is never going to win any sort of weather challenge; London can be painfully crowded if you are used to the wide open spaces of Africa; and not a Christmas goes by that I don’t miss South Africa’s famous year-end shutdown during which the country largely follows the building trade and downs tools en masse on 15 December and does no serious work until 15 January. I always answer in the same way: London truly is the centre of the world, whatever your interests.  All the concerts, sporting events, theatre and exhibitions that I yearned to see when I was a teenager come to London without fail. Every cuisine you have ever dreamed of is represented somewhere in London, from Albanian to Zimbabwean.  And every trendy food fad you can imagine pops up in London – think small plate menus; upmarket comfort food; gourmet hotdogs; bone broth – and now Nikkei cuisine.

For those who have been living in the culinary wilderness (i.e. beyond the M25, by most Londoners’ thinking 😉 ), Nikkei cuisine is made up of the food cooked by  Japanese emigrants and their descendants in Peru, Brazil and Argentina from the late 19th century onwards, and the word Nikkei originally meant a Japanese person born outside Japan.  You may be surprised to learn that the largest Japanese population outside of Japan resides in Brazil, and over the years they  have adapted the recipes they brought from home or learnt from their parents to the ingredients locally available in South America.  Right now, Nikkei is hot news in London, with a number of popular restaurants like Chotto Matte, SushiSamba and Ceviche riding high on the crest of a wave of popularity. I recently visited UNI, another haven for lovers of Nikkei food. Created by former Nobu chef Rolando Ongcoy, UNI’s menu combines Japanese staples like sushi and Wagyu beef with South American tacos and tiraditos.  The restaurant is conveniently located near Victoria station and seems to have a somewhat split personality. You enter at street level, halfway between the upper and lower floors of the restaurant.  On the upper floor, you are greeted by an open kitchen surrounded by a marble bar and white leather barstools (I kid you not), Japanese-ish wall art, as well as some some super-desirable lights made from Campari soda bottles. It’s all a bit Miami Vice, really, but downstairs the space is darker, more intimate and decorated in earth tones.  If you can, get one of the cosy semi-private tables like the one we had, tucked into beautiful stone arches. 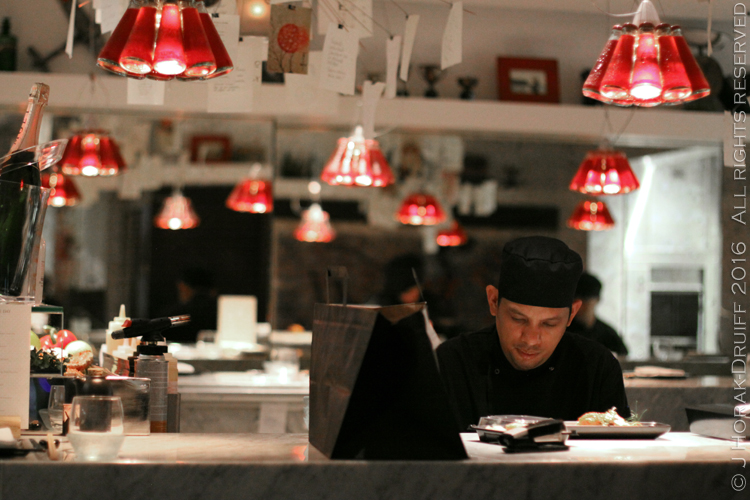 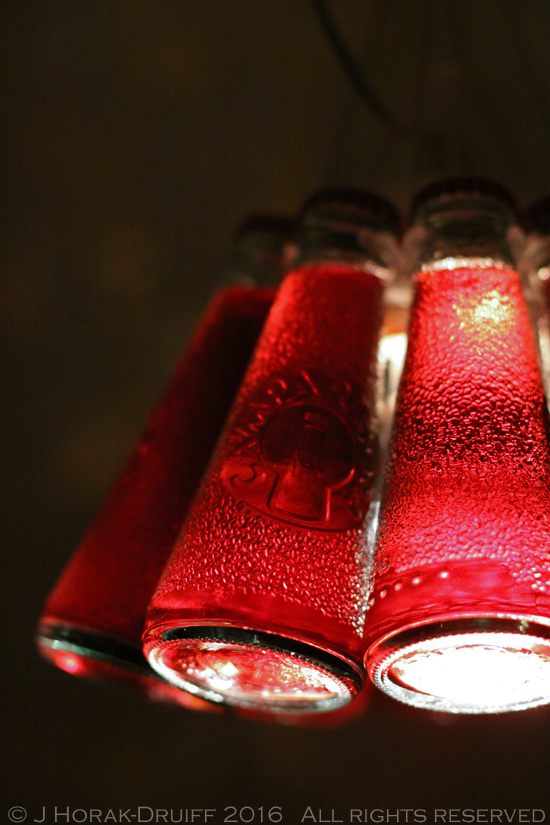 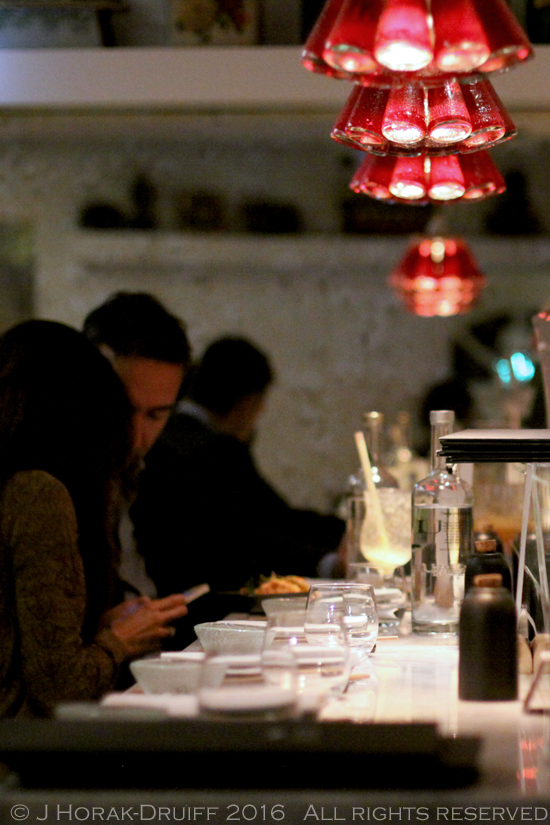 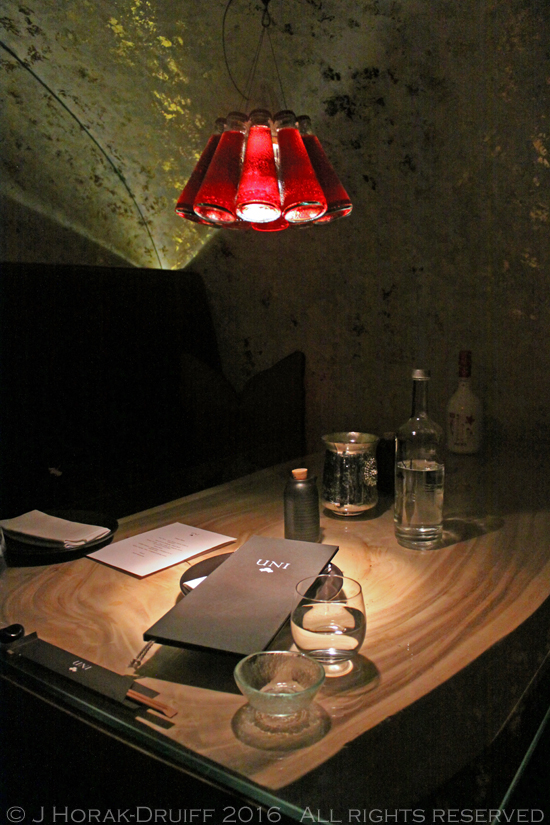 The charming manager Rafael suggested that they bring us a selection showcasing their best dishes so that we could get a good feel for the menu and while we waited for the meal to start, we shared some steamed edamame (£4.00) washed down with an excellent pisco sour, one of their signature cocktails.  First up was a pair of tuna tacos, consisting of outstanding tuna tartare, kimchi, lettuce and guacamole in a crisp mini taco (£3.90 each).  I adored these – from the textural contrast of the rich,silky fish and the crisp taco to the spicy high notes of the kimchi.  A seriously addictive dish. This was followed up by a bowl of prawn gyoza with ponzu dipping sauce (£9.50 for 3).  These plump little potstickers were bulging with fresh sweet prawn meat and worked very well with the freshness of the ponzu dipping sauce. 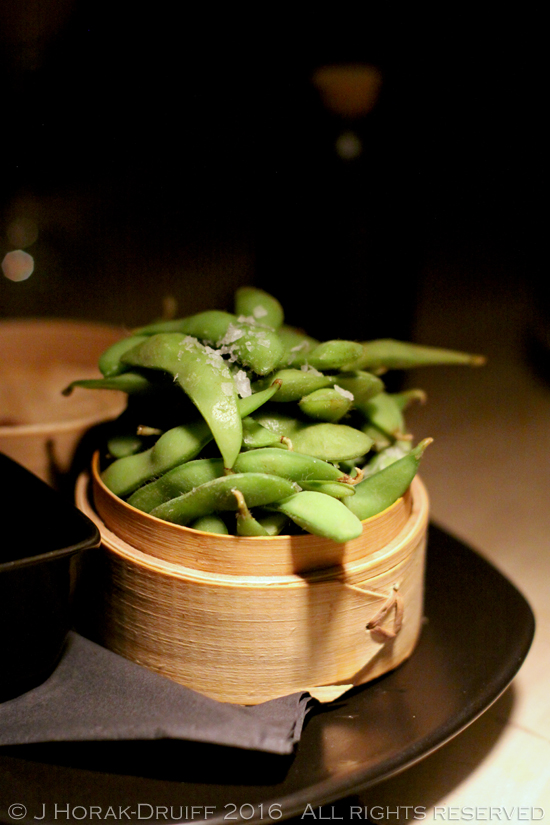 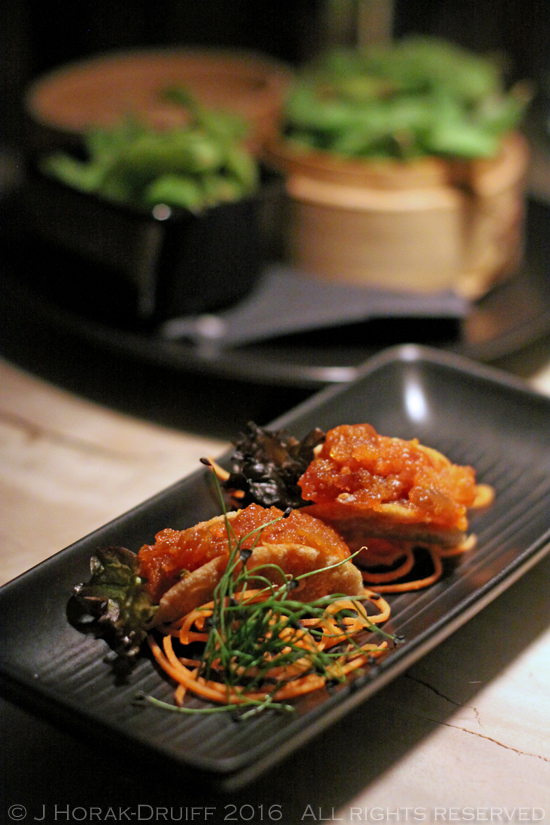 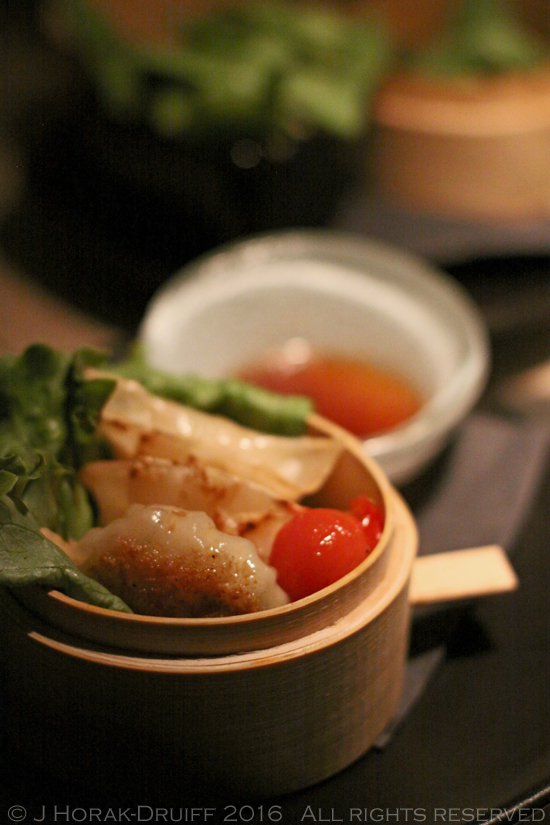 Next up was another of my favourites: seabass ceviche with tiger’s milk, aji amarillo, choclo (Peruvian corn), red onions and sweet potato (£13.50).  As with all the previous dishes, the fish was so beautifully sweet and fresh that it could practically swim around the plate!  I loved the combination of colours, flavours and textures in this dish – sweet, spicy, crunchy and yielding. This was followed by the prettiest plate of the night: butterfish tiradito with jalapeno, coriander, chilli & lime (£14.00).  I am a huge fan of butterfish and am disappointed that it does not put in an appearance on London menus more often.  Here. it was given the thinly sliced tiradito treatment and accented with bright notes of chilli, lime and coriander.  A sublime dish – we just wished that the portion was a bit bigger: £14.00 for 5 paper-thin slices seemed steep! The next course consisted of mixed sushi/sashimi:   hamachi sashimi (£9.00 for 3 pieces), butterfish nigiri sushi (£6.00 for 2 pieces); and a dragon roll maki with prawn tempura, freshwater eel and avocado (£14.00 for 8 pieces).  Although the butterfish sushi was good, I preferred it as a tiradito, which complemented the texture better.  The hamachi (yellowtail) sushi, however, was heaven – pink, plump and super-fresh.  We also both loved the dragon roll with its contrast between crisp and yielding textures and complementary flavours. 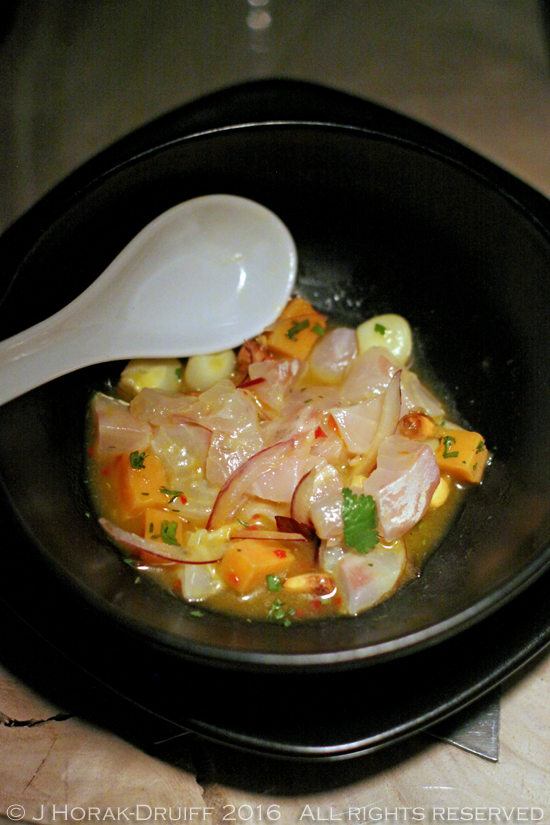 The first of our two warm dishes was a plate of grilled octopus with anticuchera, chimichurri & aji amarillo salsa (£12.00).  I liked the texture of the octopus which was a nice balance between tender and toothsome, as well as the spicy accompaniments.  But my favourite of the hot dishes was definitely the salmon teriyaki with yuzu, coriander & spring onions (£9.50), a substantial piece of fish, well-marinated in teriyaki sauce before being grilled to crisp-skinned, moist-fleshed perfection. It’s a classic for a good reason. To end the meal we feasted on mochi moriawase (sesame, vanilla, cheesecake, coconut) (6.00 for 4 pieces). These addictive traditional Japanese sweets made from glutinous rice pounded to a paste and moulded into balls all came filled with ice cream and I loved every one of them – although the cheesecake and the sesame ones were standouts. I washed down my mochi with some fresh mint tea, served in a pretty glass teapot. 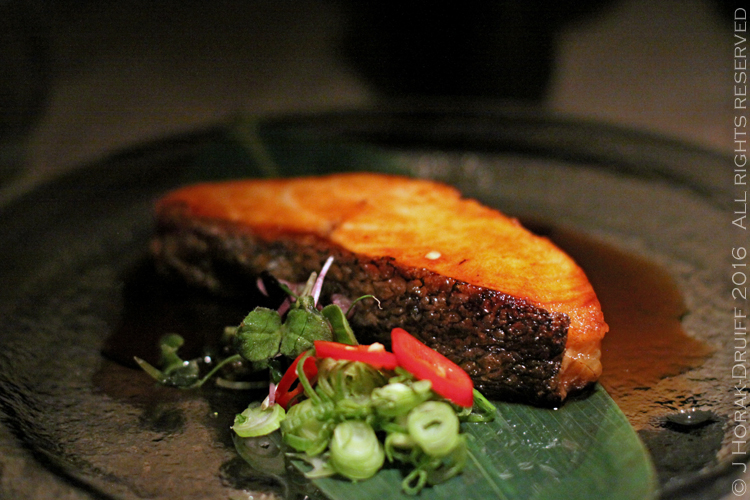 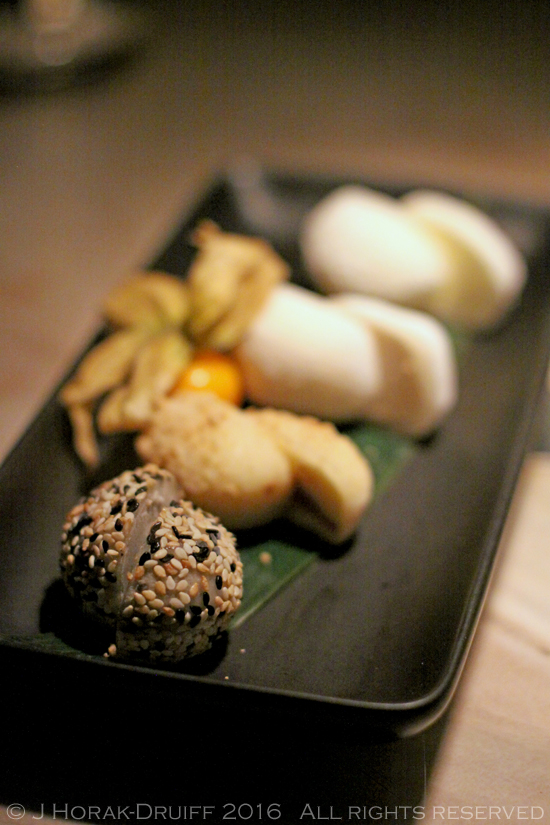 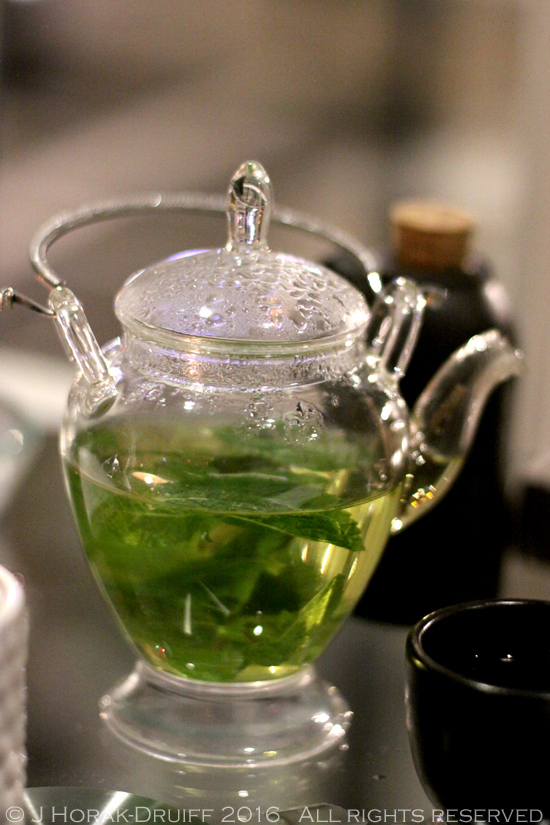 As we took the last bite of our mochi, the waiter arrived and apologetically informed us that we had to vacate the table as they operate two hour table slots. I understand that this is sadly the norm in London on a Saturday night, but it still annoys me and I always wonder why they cannot come up with something subtler – like offering to serve us our coffee/tea/dessert in their lounge/bar area without mentioning the table turning. That niggle aside, service was friendly and professional and I loved our little booth tucked under the arches. The food was of a very high standard throughout the meal with excellent complex flavours and super fresh seafood.  If I had any criticism, it would be that the prices are pretty steep and portions are not very large – the butterfish tiradito in particular springs to mind.  For my dinner companion Michelle and I, the food listed above was plenty, but if you are a hungry bloke you might not have agreed.  But as I said, the quality is outstanding, and if you are looking for an introduction to Nikkei cuisine, UNI is a great place to start.

Cost per head: approx £60 for the food described above and a cocktail each
Nearest Tube station: Victoria

DISCLOSURE:  I enjoyed this meal as a guest of UNI but received no further remuneration to write this post.  I was not expected to write a positive review – all views are my own and I retain full editorial control.