You are here: Home / Shows, launches and events / A risotto masterclass with the Costardi Brothers & Great Italian Chefs It’s a funny old thing, risotto. On paper, it is super simple to make – just stock, rice and butter, really. But it is one of those dishes that people will talk about in hushed tones, saying things like “oh no, I’d never try to make it at home, it’s just too tricky“. By “too tricky”,  I assume they mean “requiring too much attention”, perhaps? Because if you make risotto the traditional way, it requires constant supervision. You need to add the stock to the rice one ladleful at a time and replenish the liquid before the rice dries out and burns, so you really can’t be catching up on House of Cards or doing your yoga while dinner cooks! It’s a fairly slow process (a watched pot never boils, as they say!) and although I find it soothing, I can see how impatient people may find risoitto extremely frustrating.  But that’s only because they haven’t met the Costardi brothers.

Christian & Manuel Costardi hail from Piemonte in Italy and elder brother Christian says he knew from age three, when he was given his first toy stove, that he wanted to be a chef. At 14, he started attending catering school and as soon as he graduated, started working at his grandfather’s Hotel Cinzia in Vercelli.  Even back then, his ambition was to win a Michelin star for his cooking and when younger brother Manuel followed in his footsteps to become a chef, together they took over the reins of the hotel in 2005 and started working on making this dream a reality. Christian is in charge of savoury dishes while Manuel specialises in desserts, so there is synergy rather than rivalry and in 2009 they achieved their aim of a Michelin star for their risotteria at the Hotel Cinzia.

As part of their collaboration with Great Italian Chefs, they recently hosted a risotto masterclass at the Food at 52 Cookery School in London, which I attended. After a glass of bubbly, we moved downstairs to meet the Costardi brothers and to get to know them better. Christian, who is definitely the spokesperson!) explained that although we don’t usually associate Italy with images or rice paddies, the country is in fact the largest producer of rice in Europe. And within Italy, rice production is concentrated in Lombardy and Piemonte. So having grown up surrounded by the stuff, it is unsurprising that their restaurant is an homage to rice, serving an astonishing 27 different types of risotto. When I met the brothers at a the Pret a Diner pop-up a few years ago, I remember being blown away by the simplicity of their tomato risotto, a dish they say was inspired by Christian’s fond memories of nursery school lunches. 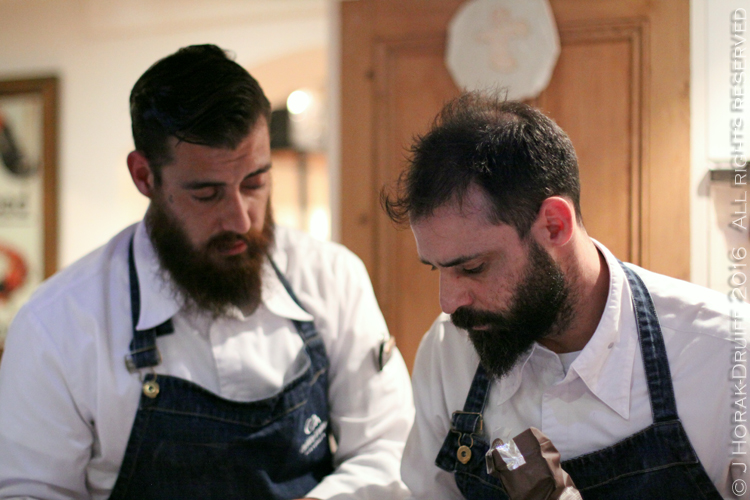 Christian explained that all their risotto is made with Carnaroli rice rather than the more common Arborio rice. Carnaroli is also a short-grained rice, but has a firmer texture and a higher starch content than Arborio – and of course all the rice the brothers use is grown in Piemonte, including their own branded rice. Christian then demonstrated to us how making risotto does not need to be a long and draw-out affair and that his method gets the dish from start to finish in 15 minutes. Departing from what we are usually told about risotto making, they start the rice in a hot pan to toast it, with no butter, oil or liquid. “Treat the risotto like your lover”, Christian tells us – meaning you had better pay it constant attention or face the consequences! Once the rice is hot (but not changing colour), he adds plenty of salt, followed by ladles of homemade stock. Again, although it is a quick process, your full attention is required, with constant rapid stirring required to break down the rice starch and achieve the right consistency. When the rice was cooked al dente, Christian proceeded to demonstrate the coolest Manteca technique I have ever seen. After adding several hefty blocks of butter to the risotto, instead of stirring he proceeded to toss the entire pan of cooked rice – as if you were tossing stir-fry in a wok. The result was a standing wave of rice that rose up and flopped back into the bowl, while gradually melting and mixing the butter into the rice. Genius! The brothers then “plated” the risotto for us to try in their custom-designed Costardi tins, adding the uniqe flavours of an aged Parmesan cream (unbelievably creamy and intense), a beer reduction (definitely something to try at home), ground Lavazza coffee and a sprinkling of salt. It sounds unlikely but it is utterly, utterly magnificent. And once we had sampled it, we had a chance to make our own version amid much hilarity, while the brothers kept a watchful eye and nudged us back on track if we got distracted from our rice. 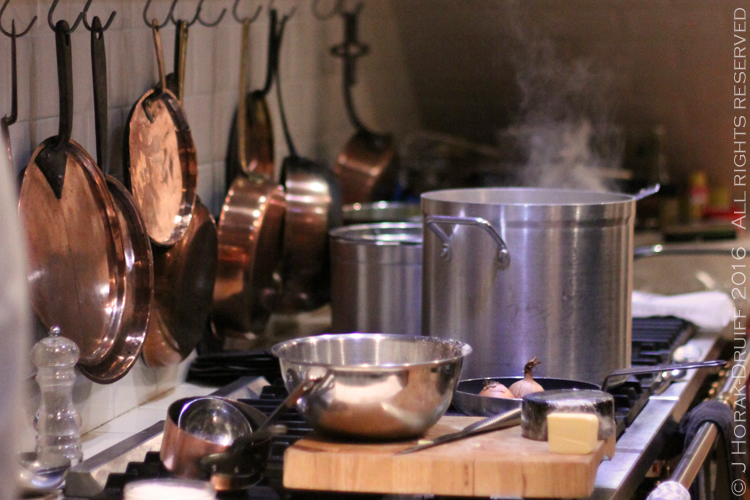 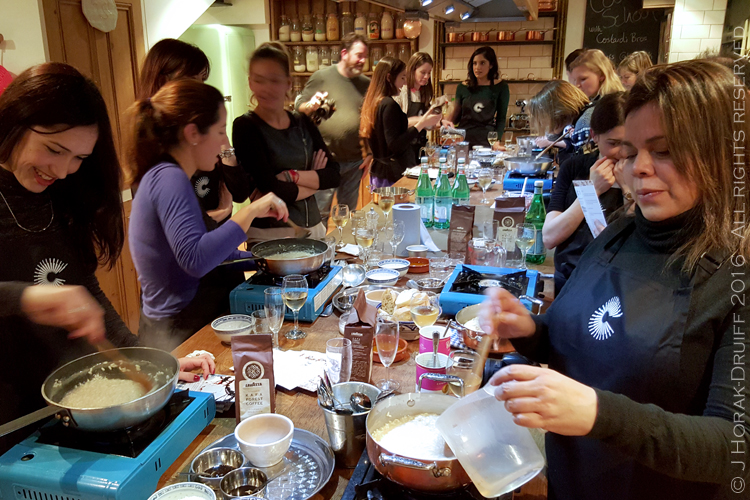 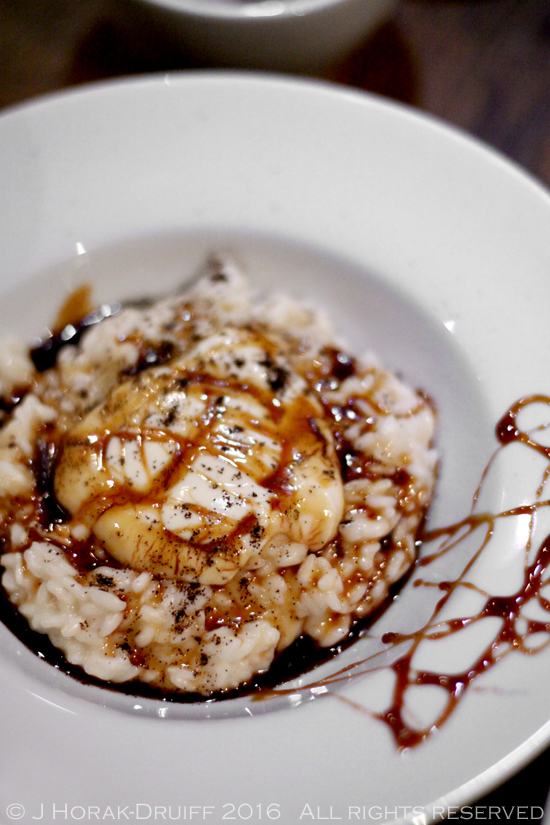 As an added bonus, Manuel then created a dessert for us to enjoy, whimsically entitled Meringue 2.0. First up was a bit of kitchen theatre as the brothers made vanilla ice cream using super-cold liquid nitrogen, a substance that has to remain below -196C in order to remain a liquid and not evaporate. The liquid nitrogen is added to an ice-cream custard and freezes it almost instantly, the theory behind this being that the rapid chilling effect makes ice crystals less likely to form and thus results in a smoother ice-cream. Watching the process was great fun as the liquid nitrogen “boils” or evaporates as soon as it hits the room temperature air, resulting in great billowing clouds of “smoke”. As Christian finished whisking the ice-cream, Manuel carefully parceled out a nice round dollop of thick chocolate sauce onto each plate and then… proceeded to smash each one with the back of a spoon to make a Jackson Pollock-esque splodge. The splodges were then topped with crumbled meringue, a scoop of ice, cream and whipped cream before being finished off with ground coffee and salt flakes. It’s hard not to gush about just how good this was – a combination of creamy, crispy, salt, sweet and slightly bitter. I’m definitely making this at home, just without the liquid nitrogen! 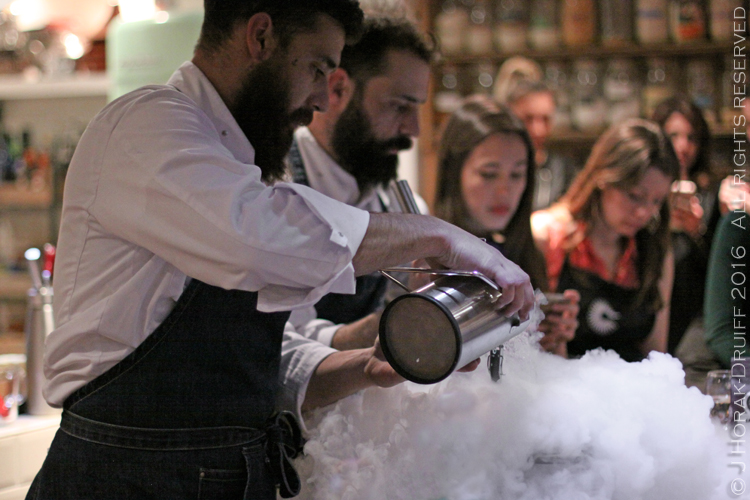 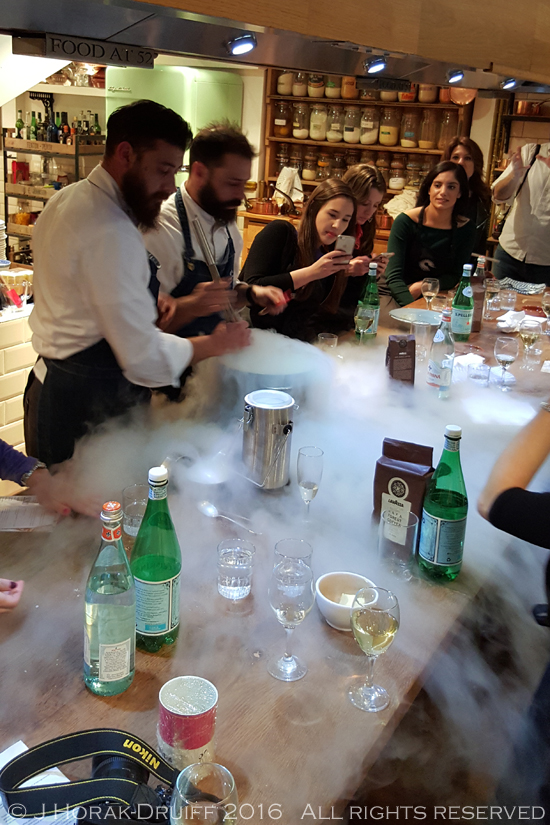 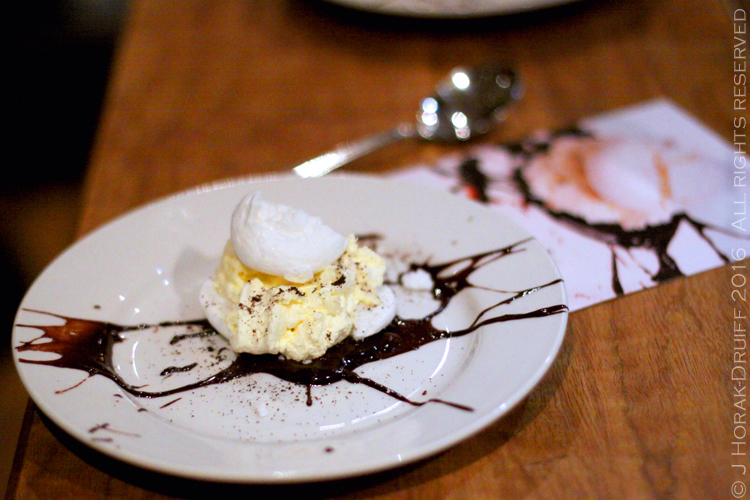 The evening was hugely enjoyable (as the pic below of me and Rosana shows!) and the Costardi brothers are delightful – quirky perfectionists with a flair for culinary innovation without losing sight of their roots or heritage. Both the coffee and Parmesan risotto and Meringue 2.0 dessert recipes can be found on the Great Italian Chefs website, alongside many others from talented Italian chefs. For other perspectives on our evening, have a look at Rosana’s post and Urvashi’s post. 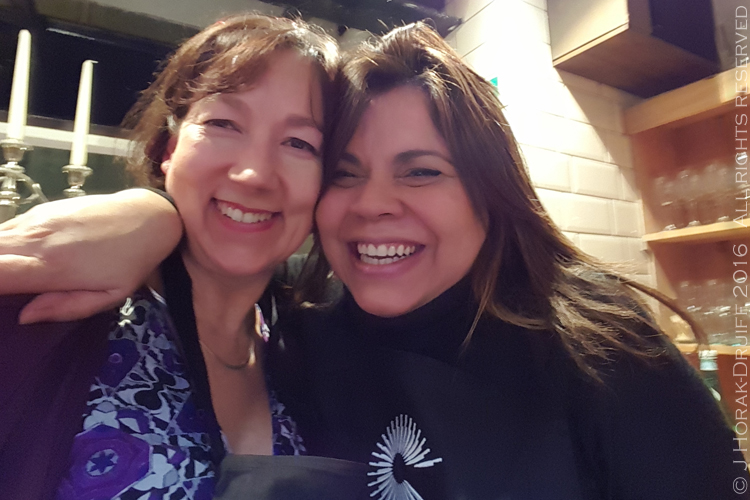 DISCLOSURE:  I attended this event as a guest of Great Italian Chefs but received no further remuneration to write this post.  I was not expected to write a positive review – all views are my own and I retain full editorial control.