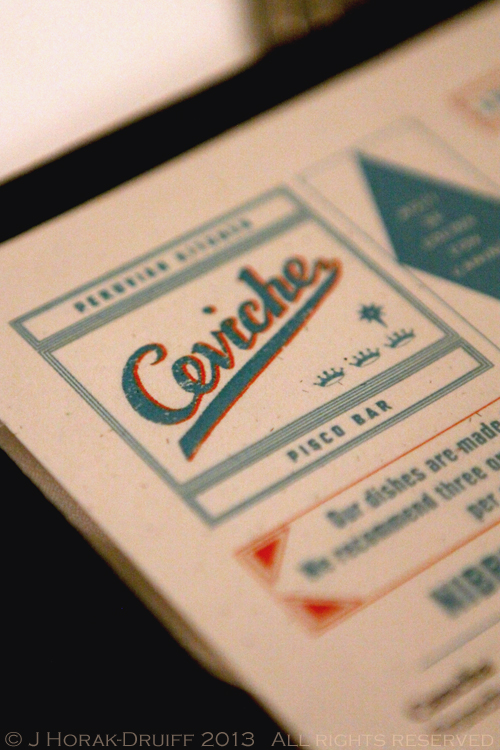 “Old DJs never die, they just fade out” goes the saying, and that may well be true for most of them. But just sometimes, you come across a story of a DJ who not only did not fade away mid-track, but walked out of the DJ booth and into a totally new career.  One such story is that of Martin Morales, one time DJ, co-founder of iTunes Europe, and former head of Disney Music (yes, you may blame him for the Jonas Brothers).  Given that background, you would think that his DJ retirement years might be spent on a yacht off Ibiza wearing a white Speedo and too much bling; or maybe as a record producer in southern California.  But no, Martin chose something else.  He chose food.

Martin Morales  was born in Peru, has lived in Mexico City and Barcelona and now lives in London with his wife and children – and has had a life-long love affair with Peruvian food.  When he realised that food was what he wanted to do with the rest of his life, he quit his job and started small with a Peruvian supperclub at his home, followed by a few pop-up restaurants, and then finally in February 2012, Ceviche, a Peruvian restaurant and London’s first pisco bar, opened its doors in Soho.  Peruvian cuisine has a rich history – as Martin puts it: “500 years of fusion food”.  The roots obviously lie in indigenous  ingredients (like quinoa) and the food of the Incas, but layered over that you find the influences of all the subsequent arrivals: the Spaniards, Africans, Italians, Chinese and Japanese, all of whom contributed to make Peruvian cuisine what it is today.

The entrance to Ceviche is narrow and unprepossessing – easy to miss, almost.  The first part of the space is a narrow room mostly taken up by the pisco bar, but from there it opens up into a more spacious dining area which was packed with happy customers when I visited on a random Thursday lunchtime in February. The decor is mostly made up of colourful posters and a wall of “old family photographs”, plus an impressive mirror-backed collection of bottles of home-made fruit and spice-infused pisco, a type of grape brandy which is the de facto national spirit of Peru. 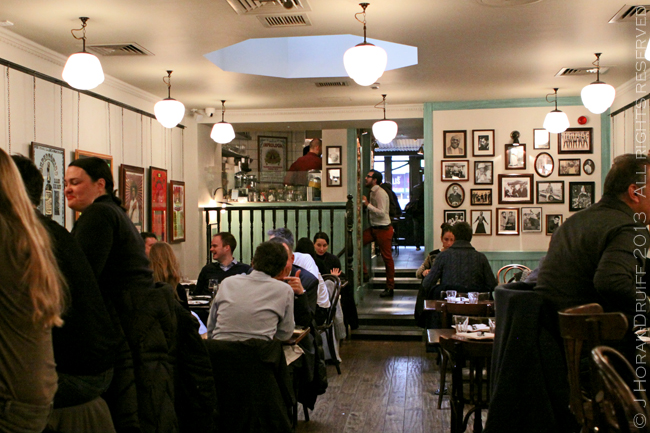 The menu is relatively brief and consists entirely of sharing plates.  If you are expecting empanadas and steaks, along the lines of the many Argentine restaurants we are more familiar with in London, prepare to be surprised.  There is, of course, ceviche.  For those of you who do not know, ceviche is a dish typically made from fresh raw fish marinated in citrus juices (e.g. lemon or lime) and spiced with local chillies. Other seasonings, such as chopped onions, salt or coriander may also be added and the resulting liquid is called tiger milk.  The citric acid in the limes causes the proteins in the seafood to become denatured, so that it takes on the appearance of cooked fish while retaining the texture of raw fish. I would advise newbies to do as I did and go with at least a couple of friends – that way you can try loads of menu items and know what you want to come back and order more of next time!

In no particular order, we had chicken saltado tequeños (wonton fritters filled with Chifa-style chicken and vegetables  @ £4.50 for 4) as well as cheese and chard tequeños  (wonton fritters filled with cheese, chard & Botija Peruvian olives @ £4.50 for 4), as well as the colourful and unusual Causa Santa Rosa (beetroot salad on a coriander Peruvian potato cake  @ £5).  The tequeños were crisp light and pleasingly grease-free, with plenty of filling – the cheese and chard was my favourite.   The salad could not have looked and tasted more different than its bland name suggested – the beetroot’s vivid red and earthy flavour made an interesting contrast with the  green potato mash cake, spiked with the freshness of coriander leaf.  The creamy dressing on the side seemed to me to contain just enough black olive paste to colour it and give it an intriguing and elusive flavour – I adored the whole dish. 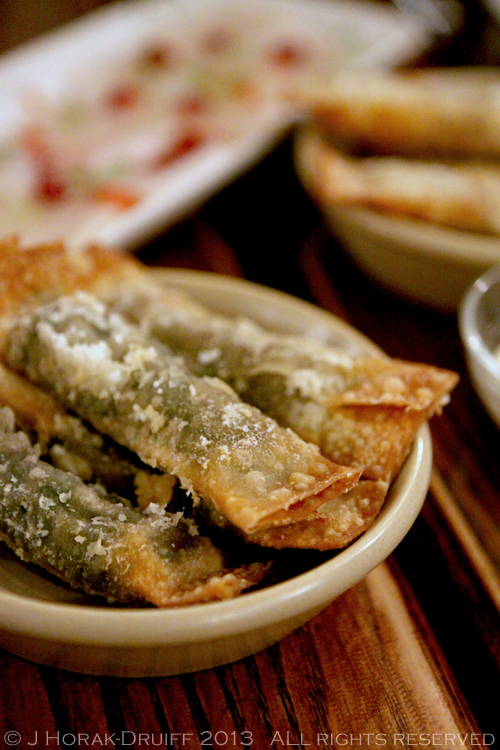 But the early star of the show was without a doubt the seafood.  We tried the signature dish of Don ceviche (seabass ceviche with amarillo chillies, tiger milk, limo chillies and slivered red onions @ £7).  This was, in a word, sublime.  Often, ceviche that I have tried seems to me to have been either left to marinate too long, causing the fish to seem more cooked than raw; or made with nuggets of fish that are too small.  Here, generous pieces of sea bass had been marinated just until the very outermost layer of flesh had started to denature and so it retained its sushi-like texture and freshness.  The balance of flavour was also spot on – somewhere between spicy, sweet , hot and acidic; like workout for your taste receptors.  More than a month later, I still dream of this ceviche. The other fishy dish we tried was the Drunk scallops (tiradito of thinly sliced king  scallops, pisco, pomegranate, limo chilli, lime and coriander @ £11).  I don’t think I have tasted creamier-fleshed scallops in my life, and the fresh, clean flavours of lime and coriander provided a wonderful counterbalance to their richness. 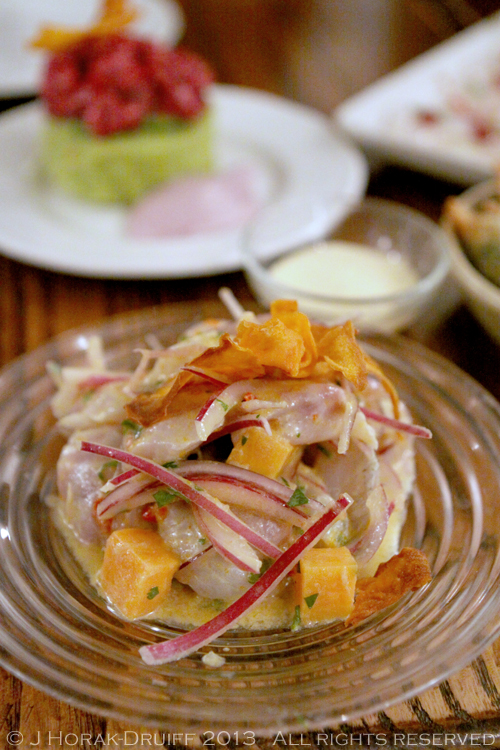 From there, we moved on to meatier dishes.  An easy choice was the Pulpo anticucho (a skewer of braised octopus marinated in coriander with chorizo chunks served on warm creamed quinoa @ £10 for 2), but I was slightly more hesitant in ordering the  Corazon anticucho (a skewer of beef heart marinated in panca chilli  with choclo corn @ £5 for 2).  It turned out I needn’t have hesitated.  If I were fearing heart-shaped chunks of flesh on a stick, my fears were allayed by the arrival of wafer-thin pieces of meat, cooked briefly and over high heat, rendering them meltingly tender and completely unlike I expected organ meat to taste – a real treat.  Choclo corn, I learnt later, is a type of South American corn with larger, starchier, less sweet kernels than the corn we are used to, and very tasty and nutty it was too.  But my favourite was the octopus and chorizo skewers – seldom have I tasted such buttery, tender octopus and I always forget how well chorizo matches seafood.  Another huge recommendation from me. We also ordered ribs (which I no longer see on the menu) which were a little on the dry side for my liking, but tender and tasty. On the side, we tried the Huancaina macaroni (a Peruvian- style mac ‘n cheese with amarillo chilli sauce @ £7.50 and Ensalada de quinoa (white quinoa, tomatoes, avocado, butter beans and coriander with a lime and limo chilli vinaigrette  @ £6).  I adored the quinoa salad, which brought out the best in this nutty Peruvian grain and provided a somrgasbord of flavours – particularly the sweet yet spicy vinaigrette.  I was less convinced by the mac ‘n cheese – there just did not seem to be enough chilli in it to differentiate it in any meaningful way from common or garden mac ‘n cheese. 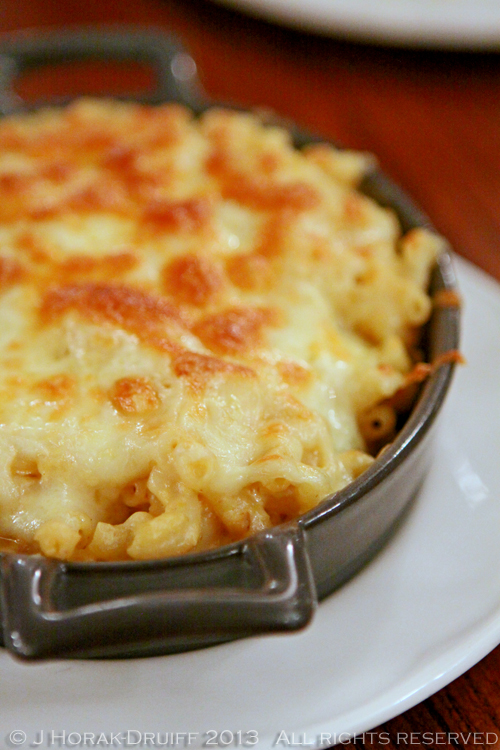 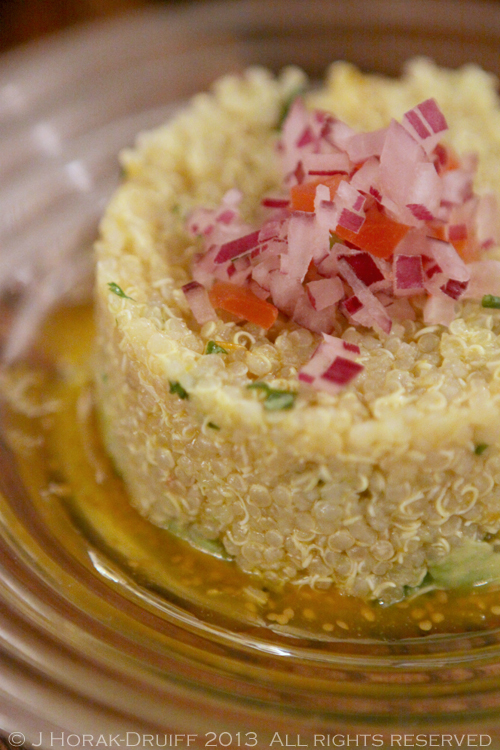 It would, of course, have been rude to leave without trying a couple of desserts, so we chose the Encanelado de pisco (cinnamon sponge soaked in pisco spirit syrup served with dulce du leche ice-cream  @ £5) and the Brownie Peruano (Peruvian chocolate and pecan brownie served with cinnamon ice-cream @ £5).  The Brownie was a disappointment for me, firstly because I am not sure what made it remotely Peruvian, and secondly because it had been overbaked to the extent that it was hard to get a fork to crack the base.  The cinnamon ice-cream, however, was faultless – not too sweet and packed with spice.  Why do more places not make/sell this?  The cinnamon sponge, on the other hand, proved to be a lot lighter and more appealing than its description had suggested, and the dulce du leche ice cream was quite sublime. 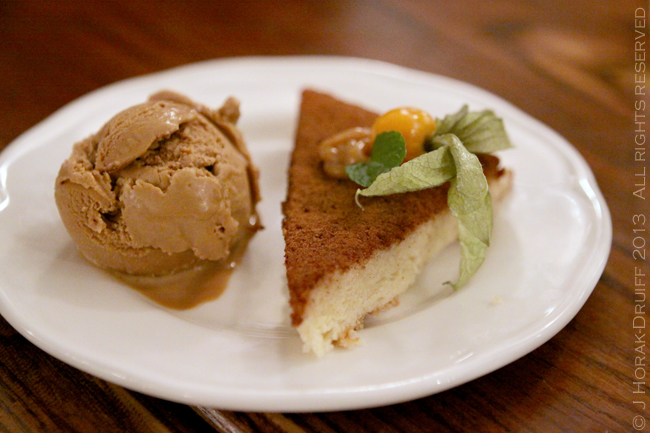 Had it not been a weekday and had I not needed to go back to work after lunch, I would have done some serious damage to their impressive shelves of Macerados a.k.a Pisco infusions in flavours such as cherry, lemongrass, physalis, apricot, cinnamon, ginger or hot native Peruvian chilli pepper.  These can be enjoyed as a shot (£3) or as part of one of the many cocktails available (£12). 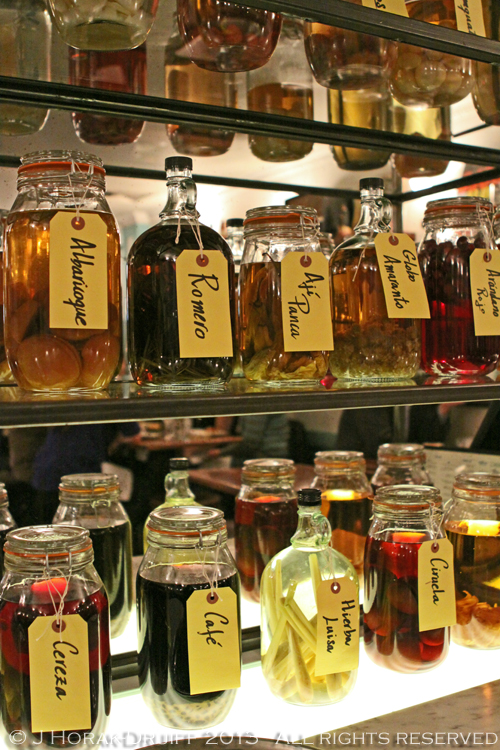 My verdict?  Just wow.  I really loved Ceviche.  I loved its casual feel, the friendly service and above all the outstanding and unusual food – it’s always wonderful to discover a cuisine that you knew very little about, and find that you love it.  It also isn’t often that a dish haunts my dreams after visiting a restaurant, but both the don ceviche and the octopus skewers regularly do.  Despite a couple of less than stellar dishes (the mac ‘n cheese; the brownie), there was still enough in our meal to impress and entrance me, and I will most certainly be back.  What I might say is that while I found the food pleasantly robustly seasoned (something which many restaurants seem fearful of doing these days, lest they fall foul of The Salt Police), if you are in any way avoiding sodium, you may want to ask the kitchen to go easy on the salt.  What we had was more than adequate for three people for lunch and would have cost about £25 per person, including bottled water.  Perhaps not bargain basement, but cheaper than a trip to Peru.  Martin has a Ceviche cookbook coming out this year, as well as a second branch opening in east London in the summer – mark your diary now!

DISCLOSURE:  I enjoyed this meal as a guest of Ceviche but received no remuneration other than my meal, and all opinions are my own.

Error: API requests are being delayed for this account. New posts will not be retrieved.