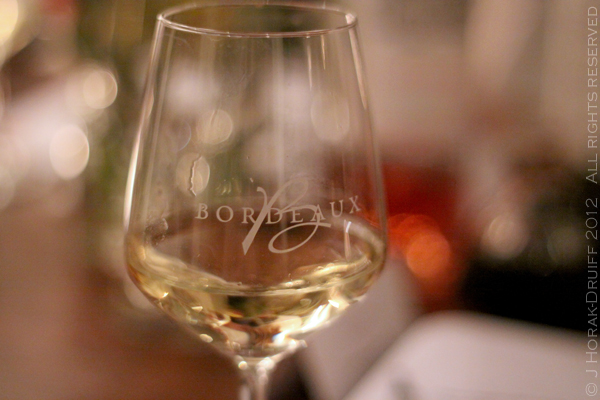 Bordeaux is a wine producing region, centred on the the city of Bordeaux on the Gironde river, in south-west France.  Its total vineyard area is over 120,000 hectares, making it the largest wine growing area in France. The approximately 700 million bottles of wine produced there each harvest range from table wine to some of the most expensive and prestigious wines in the world, including such iconic appellations as Chateau Lafite-Rothschild, Chateau Margaux, Chateau Latour, Chateau Mouton Rothschild, and Chateau d’Yqem. Bordeaux is also one of those names in the world of wine that has become synonymous with a number of things:  red wine, excellence, scarcity… and inflated prices.  It’s a byword for quality wine, but it’s also a word that encourages annoyingly wine-snobby comments like “oh, yes I can pick up the hint of mint and a flutter of cassis on the nose, it must be from the left bank”.  But as I discovered at a recent dinner held in London, Bordeaux Wines are keen to let people know that there is more to Bordeaux than stratospherically priced bottles of red wine.  The event chosen to showcase this was a Japanese dinner at the house of my good friend Luiz (a.k.a. The Lodon Foodie).  The idea was to pair a Bordeaux wine with each course of a Japanese-inspired meal cooked by Luiz; and to serve only wines with a retail value of £20 or less to illustrate what is available in Bordeaux at under two tenners, and maybe to uncover some surprising food and wine matches along the way. On the appointed evening, 20 food and wine bloggers and writers (including me, Andrew,Rosana, Neil and Giulia) turned up at Luiz’s gorgeous home hungry and keen to see how Japanese food and Bordeaux wines would match. Upon arrival, we mingled in the lounge, nibbling on pan-fried leek gyoza dumplings and spectacular sichimi (Japanese 7-spice) popcorn (so delicious, Luiz should have sold it in bags at the door!)  These were paired with Reserve de Sours NV sparkling rosé (50% Merlot, 50%Cab – £19.99 from M&S) and a Les Amants de Mont-Perat Bordeaux Blanc (50% sauvignon blanc, 50% Muscadelle – £9.25 from The Wine Society).  The sparkling  rosé had a very pretty deep pink colour with a lush palate full of ripe red fruits and some fine aciditiy for balance.  Sadly, though, I did not think it matched particularly well with either of the canapés, as the spices particularly in the popcorn emphasised the acid and overwhelmed the fruit. But I thought the white was good with the spicy popcorn as the spice brought out flavours of green pepper and guava in the wine. From there we decamped to the dining room downstairs for the Franco-Japanese feast.  Bordeaux wines and the concept of food and wine matching was introduced by the very engaging wine educator Christina Pickard, followed by the evening’s floorshow which consisted of Rosana accidentally setting alight her menu and then blowing the burning cinders onto Andrew’s trousers. Talk about a hot date…! Moving rapidly along (as Andrew did when the cinders alighed on his lap!).  The first course consisted of salmon sashimi “the South American way” (samon sashimi with avocado and sour cream, caramelised onions and soy sauce).  I loved this – not only for the yielding, fatty salmon slices, but also for the contrast between the creamy avocado mix and the tart, salty onion and soy dressing. It was paired with the Chateau de Bernet Bellvue 2011 Graves (50% Semillon, 40% Sauvignon Blanc, 10% Muscadelle – £9.99 from Sainsbury’s).  On its own, the wine was a pleasant fruit salad of flavours like apples and passion fruit, but once again I thought the match was not great.  Drunk only with the salmon, the wine was lovely, but I thought that the richness of the avocado cream overwhelmed the wine’s delicate flavours. 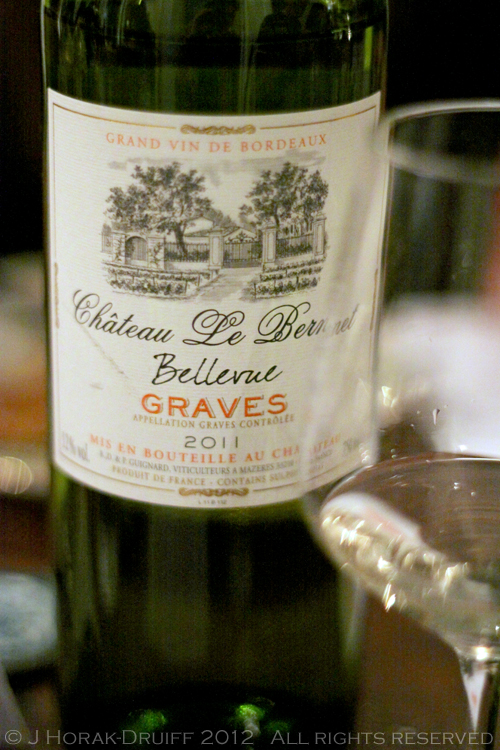 The next course was listed as Ankimo which turned out to be a traditional Japanese dish ofballotine of monkfish liver cooked sous vide and served with spicy shredded daikon and ponzu dressing.  I was a bit nervous of my first forkful as the texture had been described as “interesting” and “slightly challenging” by fellow-diners, but it turned out to be lovely – like a fishy version of foie gras.  The clean flavour and crunch of the daikon radish balanced out the richness and the dish was lifted by the citrus tang of the ponzu dressing.  This was paired with Chateau Maume 2011 Bordeaux Rosé (50% Merlot, 50% Cabernet Franc – £7.49 from Majestic).  The wine was like a glass of ripe strawberries with slight hints of smokiness – delicious on its own amd good with the creamy liver, but I felt once again that the flavours of the daikon and the ponzu dressing overwhelmed it, masking its more attractive flavours and bringing to the fore the less attractive, strident notes. The next course was probably my favourite of the whole meal and was described as deconstructed sushi:  grilled scallops with nori seaweed, tobiko eggs and creamy spicy sauce on sushi rice.  The slices of pale, creamy scallop flesh were barely cooked and retained a deliciously yielding texture, and the spicy creamy sauce lifted the entire dish to a level of dangerous decadence.  This was paired with my favourite wine of the night: the Roquefortissime 2010 Chateau Roquefort Bordeaux Blanc (90% Sauvignon Blanc, 10% Semillon, 10 months in new French oak barrels – £12.99 from Waitrose). This most surprising wine had a nose like overripe citrus fruit and a lovely full, rounded mouthfeel with notes of white peaches and vanilla.  If I did not know better, I might have pegged it as a Chardonnay in a blind tasting which is quite extraordinary for a Sauvignon – truly lovely.  But once again, I was not convinced of its match with the food as the creamy spicy sauce brought out the wine’s sharp edges of acid and alcohol.  But taken separately, probably my favourite wine and my favourite dish of the night. 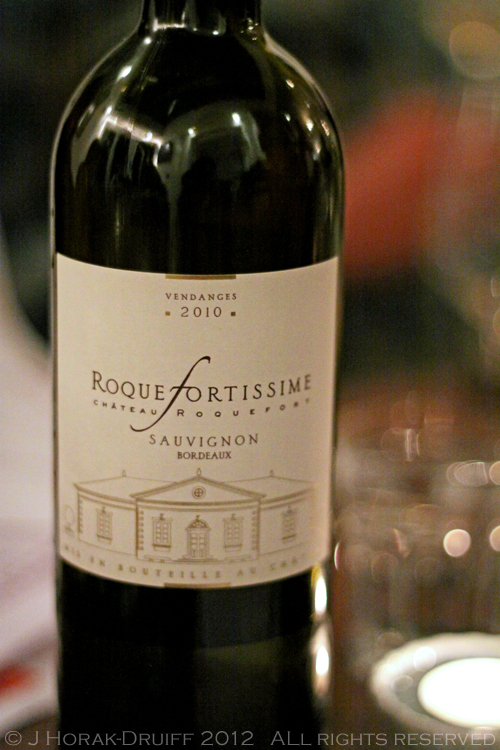 The meat course consisted of teppinyaki of ribeye steak marinated for 48 hours in miso, sake & mirin served with broccoli and fine green beans in a black esame dressing. Side dishes included peach and daikon salad in a Japanese mayo vinaigrette; sea bream rice cooked in a clay pot with ginger and spring onions; andmiso soup with fried aubergines, spring onions and sweet eggs.  The ribeye was nothing short of spectacular – umami-rich, flavourful, properly seared and gloriously red in the middle. Side dishes were also a hit, particularly the fantastic sea bream dish which was served with the fish fillets op top of the rice and then mixed with ginger and spring onions and pulled apart with forks tableside by Luiz himself.  The meat was paired with Chateau Fonguillon 2009, Montagne Saint-Emilion (70% Merlot, 12% Cabernet Sauvignon, 15% Cabernet Franc, 3% Malbec – £7.99 from Tesco). The wine was a delicious mix of dark blackberry flavours, vanilla and chocolate and it was probably the best food match of the night, pairing beautifully with the steak.  Looking back at all my tasting notes, I think this might well be because this was the least spicy dish of the night. And from there, we moved on to dessert: a decadent flourless chocolate cake with whisky prunes served with a quenelle of green tea ice-cream.  Seriously, what’s not to like about flourless chocolate cake?  This was everything it should be – rich, heavy and decadent, with the added bonus of little surprise studs of boozy prunes scattered throughout.  And it was saved from being overly-rich by the slightly bitter undertones of the matcha ice-cream – a delicious combination.  This was paired with a Ginestet 2009 Sauternes 2009 (80% Semillon, 10% Suv, 10% Muscadelle – £10 from ASDA).  The nose was lovely – heavy with the promise of sunshine and apricots, but for me the palate failed to live up to expectations, being rather like watered-down honey and not as complex as the best dessert wines I have tried.  It had a nice clean finish but I felt it was totally overwhelmed by the rich dessert. It was a really intriguing evening, making me think not only about value for money in wine and the power of a wine’s name, but also about food and the context of how it developed, alongside which beverages.  For example, although I loved all of Luiz’s dishes and enjoyed many of the wines, I did not think that anybody left the dinner thinking Japanese food and Bordeaux wines are easy bedfellows.  The fact is that the flavours of Japanese cooking developed alongside other beverages such as sake or beer and maybe for this reason, they simply pair better with those flavours.  That said, I think it is tremendously useful to experiment as we did on this occasion, seeing whether foods and beverages that developed on opposite sides of the globe might usefully be matched to create a new and delicious combination – you don’t know till you try.  The other points that the dinner illustrated for me were that there is good value and quality wine to be found in Bordeaux if you are willing to broaden your horizons beyond the few “big name” first growth estates.  Also beware any Bordeaux with a name almost like a first-growth – it is probably trading on its name ane is unlikely to offer any sort of value for money!  And lastly, my belief was also reaffirmed that sometimes it does pay to spend a bit of cash – a point illustrated by the lacklustre but cheap Sauterne.  I’m not saying you have to buy Chateau d’Yqem, but I think spending another 5-10 pounds might have yielded a truly spectacular wine rather than a very pedestrian one.   Thanks very much to Bordeaux Wines UK for organising this interesting and enjoyable evening and to Luiz for his charming hosting, his amazing cooking abilities, and his awesome attention to detail.  Click here for more details of his supper club. For a few more bonus pictures, see my Flickr set of the evening. For other accounts of the evening, see:

DISCLOSURE:  I attended this evening as a guest of Bordeaux Wines UK but did not receive remuneration to write this post and all opinions are my own.