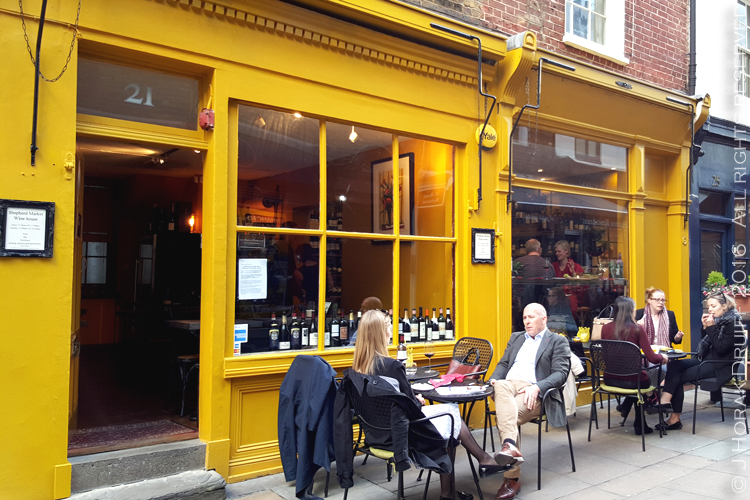 Just off Piccadilly, between Green Park and Hyde Park Corner stations, lies Shepherd Market, a small square developed in 1735-46 by local architect Edward Shepherd on the open ground then used for the annual May fair, from which Mayfair takes its name.  It comprises a small central square and number of small side streets with a variety of boutique shops, restaurants and Victorian pubs and has a remarkably colourful past. Shepherd Market was known since the 1700s as home to  Mayfair’s ‘ladies of the night’; it was here in the 1980s that Jeffrey Archer met with a prostitute (and his attempts to deny this led to his imprisonment for perjury); in the 1920s it was an ultra-fashionable London address and frequented by writers like Anthony Powell; and in 1999 just around the corner on Curzon Street,  Johnny Depp reportedly paid £11, 000 for a bottle of 1978 Romanee Conti at Marco-Pierre White’s  Mirabelle restaurant (the total bill came to an eye-watering £17,000!).  To say that the square is a unique London treasure is an understatement.

On a cool Spring evening last week, we made our way out of the traffic and tourist throng( on Piccadilly, down White Horse Street, and into the relative tranquillity of Shepherd Market, like Alice tumbling down the rabbit hole. The little square and surrounding alleys remain home to a number of pubs and a surprising variety of restaurants: French, Turkish, Iranian, Italian, Lebanese and… Polish-Mexican fusion (I kid you not!). As I said, there are a few pubs, but I have always felt the square lacked somewhere for more serious wine drinkers – but that has now been rectified by the Shepherd Market Wine House.  They first opened their doors in November 2015 as a six week pop-up wine bar but this proved so successful that they underwent a major refurbishment and reopened at the end of February 2016 as a permanent fixture. It’s hard to miss in its canary-yellow livery and the warm and inviting colour continues inside, accented by natural wood floors and furniture. On the ground level there is a wine retail space and tasting area with bar seating (I particularly like the bar counter along the window) plus seating for 16-18 in the adjacent room and a few outside tables. In the cellar there is seating for a further 12-14 people and a semi-private tasting room that seats 8.  They operate a no table reservations policy but both cellar spaces can be booked for private functions or bespoke tastings. 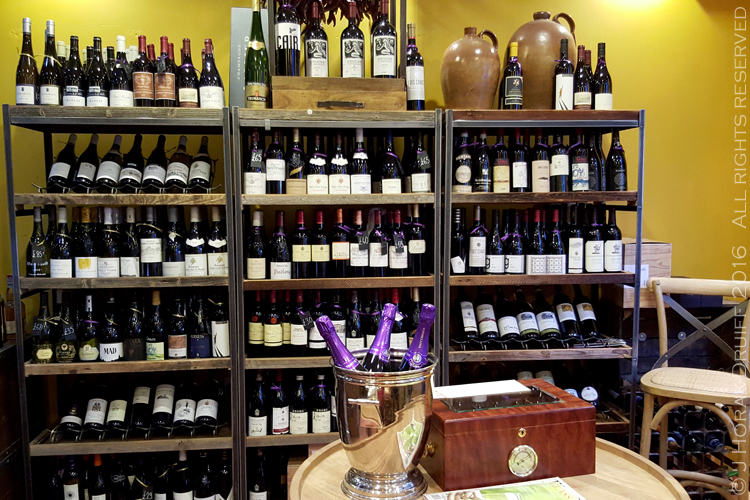 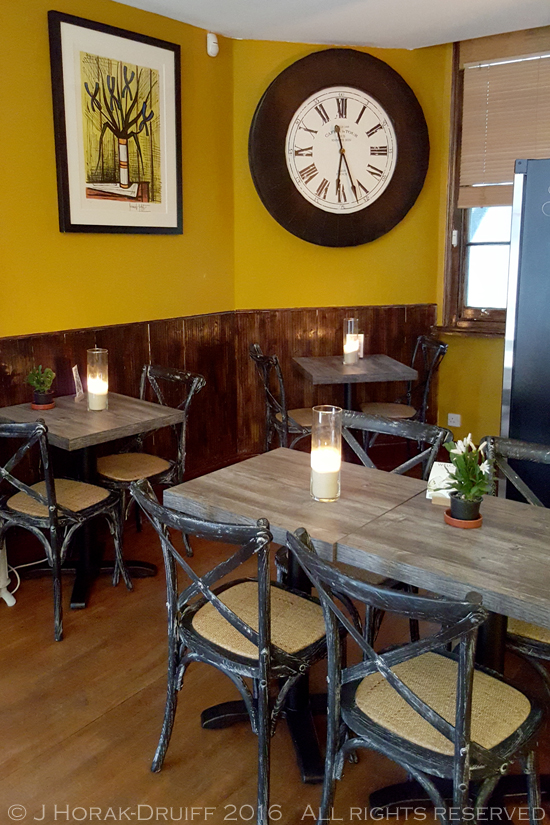 But what about the wine?  Heading up the Shepherd Market Wine House team is super approachable manager, buyer and sommelier Ben Van de Meutter, previously Head Sommelier at Butler’s Wharf Chop House and before that, Cellar Master for a luxury cruise liner group.   Ben told us that Shepherd Market Wine House aims to source an eclectic selection of wines from around the world with excellent vintages, ready for drinking immediately. The list is compact but well-thought our and over 15 wines, including sparkling and Champagne, are served by the glass. Glasses range from £6 to £10 and bottles from £30-£250.  But what really pleased me was seeing that they operate the Coravin system (which I had last encountered in the Four Seasons San Francisco).  This innovative system enables customers to taste a small selection of fine wines by the glass, with wines changing frequently. In the video below you can see Ben demonstrating and explaining how it works, by injecting inert Argon gas into the bottle through the cork and thereby displacing enough wine for a tasting portion.  The bottle remains sealed and can keep indefinitely – genius! 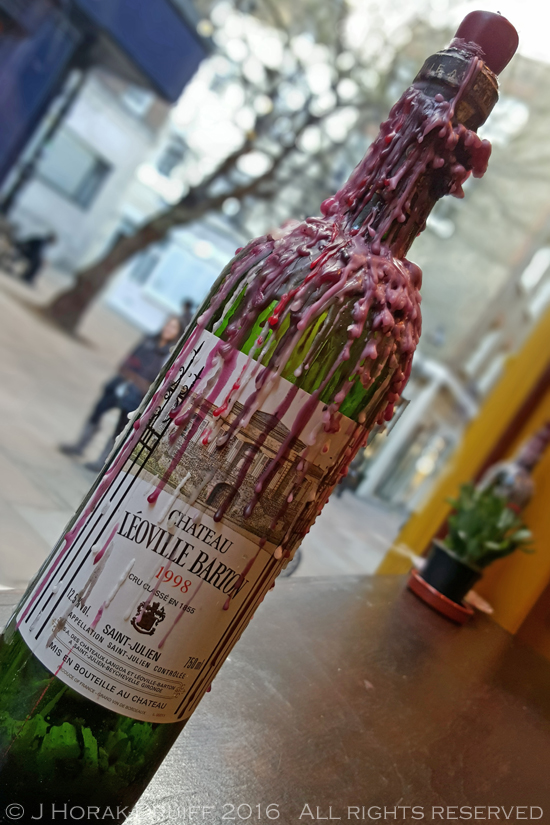 So what did we have? We started with a glass of the award-winning Nyetimber Classic Cuvée, a lovely English sparkling wine that will challenge all your preconceptions about English wine. This was followed by a glass of 2014 Château Panchille, Bordeaux Blanc for me and a glass of the unusual 2014 Jurassique Arbois Pupillin (Chardonnay) for Nick. And because it would have been rude to leave without seeing the Coravin in action, we finished with a flourish, sipping a glass of bloody fantastic 2011 Domaine Leflaive, Puligny-­Montrachet 1er Cru. It’s £40 for a 125ml, but that’s a damn sight more affordable than a whole bottle at a frisky £250! But of course, one cannot live by excellent wine alone (so I’m told!) and Shepherd Market Wine House also serves great cheese and charcuterie boards to go with your wines.  Ours comprised some green olives, two kinds of salami, mortadella, Camembert, Comté, a super-creamy goat cheese, bread, grapes and pickles, all of very high quality. They also do a £10 lunch deal for a hot sandwich and a glass of wine. 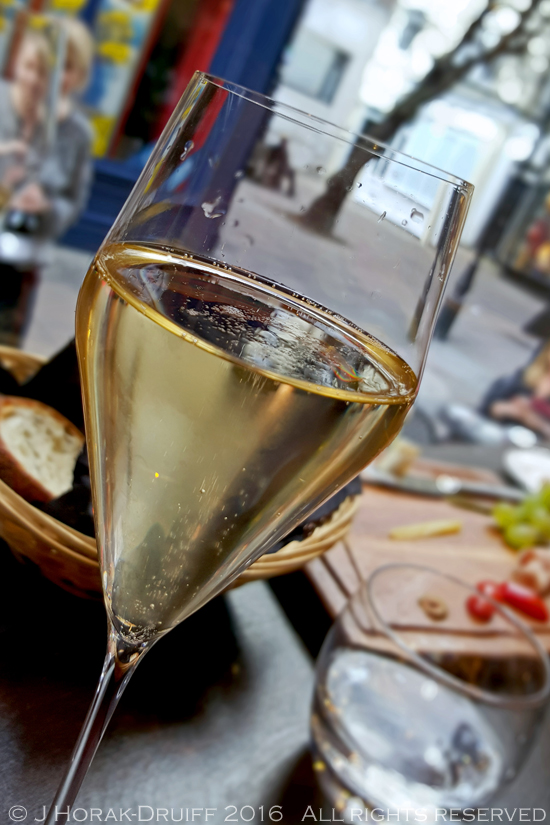 I can think of few better places to while away a few hours with friends after work, trying a variety of wines by the glass and nibbling on one of their platters, watching the world go by through the huge windows.  Ben is a real asset to the business, striking just the right note between being knowledgeable yet affable and not in any way intimidating or condescending (which is often the perception that people have about sommeliers, rightly or wrongly).  I am pretty sure that if you pop in and describe to him what style of wine you like, he will be able to recommend something within your taste and budget that will gently expand your vinous horizons.   Bottles are available to buy for takeaway or can even be delivered locally. With this much going for it, Shepherd Market Wine House is  definitely going to be my Summer 2016 hangout of choice!