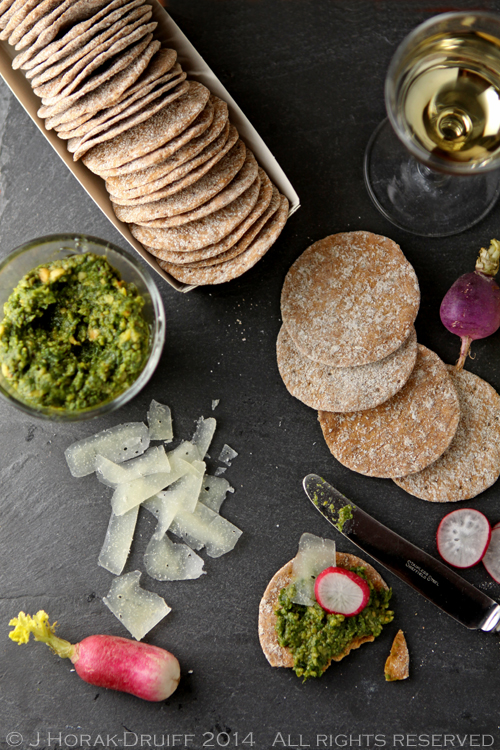 Back in both 2012 and 2013 Two separate bodies did a bit of research to determine how much young people today know about where their food comes from.  The 2012 survey by the charity LEAF targeted 16-23 year-olds, while the 2013 survey by the British Nutrition Foundation looked at 5-16 year-olds.  What they uncovered was pretty depressing.  Almost a third of UK primary school pupils think cheese is made from plants;  and a quarter think fish fingers come from chicken or pigs.  Nearly 10 percent of secondary school pupils thinks tomatoes grow under ground.  In the older group, more than a third did not know bacon comes from pigs and 40 percent failed to link milk with an image of a dairy cow (7 percent even thought it was made from wheat!).  And before you think that British children are alone in this confusion, recent surveys in Australia found that 92 percent of the young people surveyed did not think that bananas grew on trees; but 27 percent did think that yoghurt grows on trees.

I am pleased to say that most adults I know are aware of the provenance of fish fingers, bananas and yoghurt (!) – but I am still amazed on a regular basis at the checkout tills in supermarkets when I am buying fruit or vegetables and the person who has to key in the item’s code to get the correct price per weight turns to me blankly holding an aubergine and asks “is this a passion fruit?”.  It seems that we have become so used to being confronted by our food scrubbed clean of all traces of soil, trimmed of all unpopular bits and served up in a polystyrene tray, labelled with its name and barcode, that many of us struggle to tell the difference between a turnip and a Jerusalem artichoke when we are confronted by them fresh from the farm and covered in dirt. 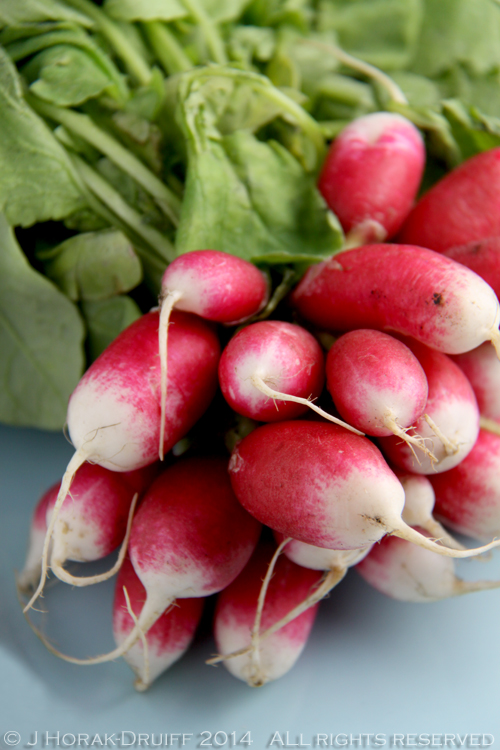 Because you see, the thing is, vegetables don’t naturally present themselves blemish-free and dirt-free with all the difficult bits trimmed off. Grow your own and you will quickly come to realise that carrots come with masses of fine green foliage; broad beans  consist of more pod than bean – and are a pain to pod;  potatoes carry so much dirt with them you can easily clog your sink just trying to catch a glimpse of the tuber’s skin; and beetroot can be rather ungainly roots with bright red stalks and masses of red-veined leaves. And because we have become so used to buying our vegetables already cleaned and packaged, we have forgotten that some of the stuff that supermarkets routinely trim off and throw away is actually pretty good to eat – turnip greens, carrot greens and beet greens being the ones that spring immediately to mind. 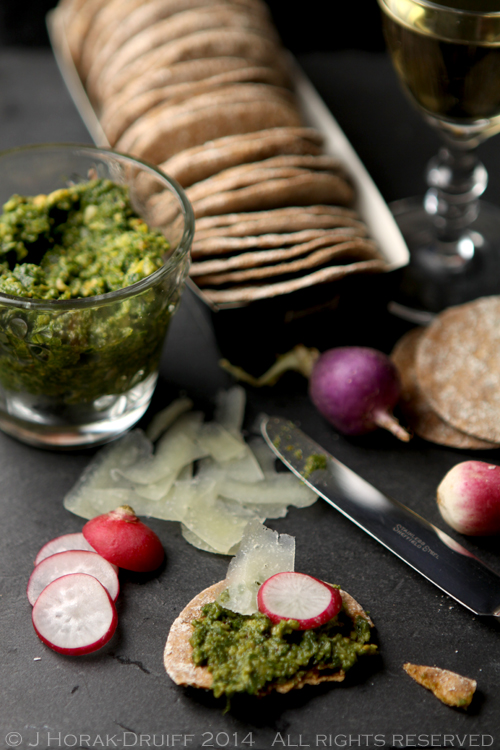 When Nick first started his allotment last year, all the older allotment regulars were keen to offer advice and support – and he was also often the recipient of their crop surplusses.  One of the earliest crops of the summer is the radish, and quite soon after his arrival on the allotments a neighbour presented him with a lovely bunch of radishes.  Said neighbour was about to helpfully chop off the greens and toss them on the compost heap when Nick stopped him, knowing my penchant for cooking unusual bits and pieces.  Of course, he was right: although most people discard them, radish greens are an integral part of one of my favourite side dishes – braised radishes on their own garlicky greens – and Nick got into the habit of bringing me radishes with greens whenever he could.  But as this dish can be a little time-consuming I am always on the lookout of other things to do with radish greens, which is how I came across the idea of radish green pesto, and this recipe for it. 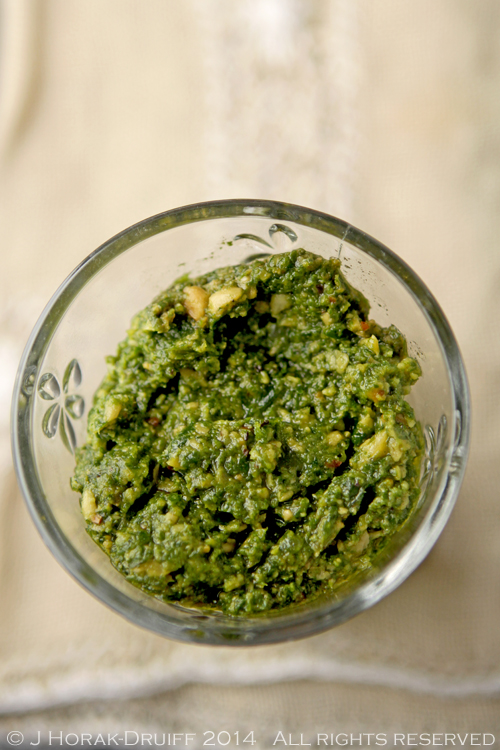 If you are growing your own radishes, try to harvest them young as the leaves get woodier and quite unpalatably prickly as they age.  Radish greens have a more bitter undertone when raw than, say, more traditional pesto greens like basil, so to take the edge off that you should substitute a sweeter nut rather than pine-nuts which can have an underlying bitterness of their own when untoasted.  I chose almonds, but you could also try pushing the boat out and using macadamia nuts.  As always with pesto, make sure the olive oil and the Parmesan are the best you can afford because you really do taste them in the final product.  The end result, as you see, is vibrantly green and the flavour is like basil pesto… but with more of a bite to it.  I served some of mine as canapés: on my favourite Peter’s Yard crispbreads topped with a slice of radish and some Parmesan shavings – perfect with a glass of dry white wine.  It’s also great with pasta or can be stored for up to a week in the fridge (or longer in the freezer). 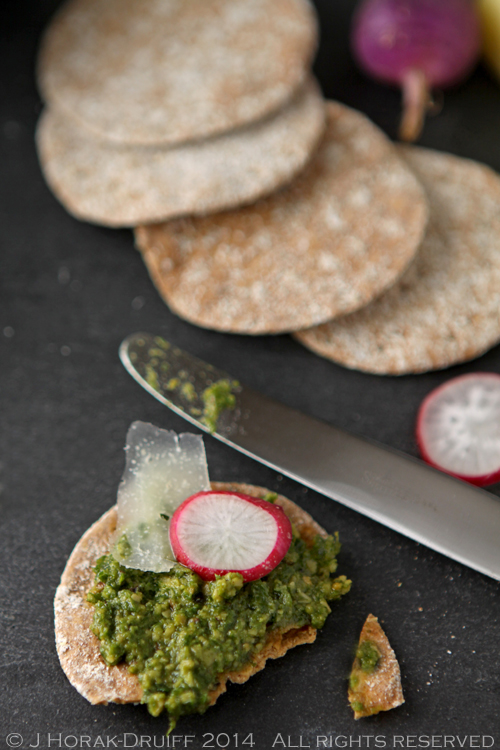 If you enjoy slightly unusual pesto, have a look at what creations other pesto-loving bloggers have come up with: 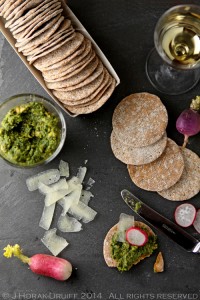