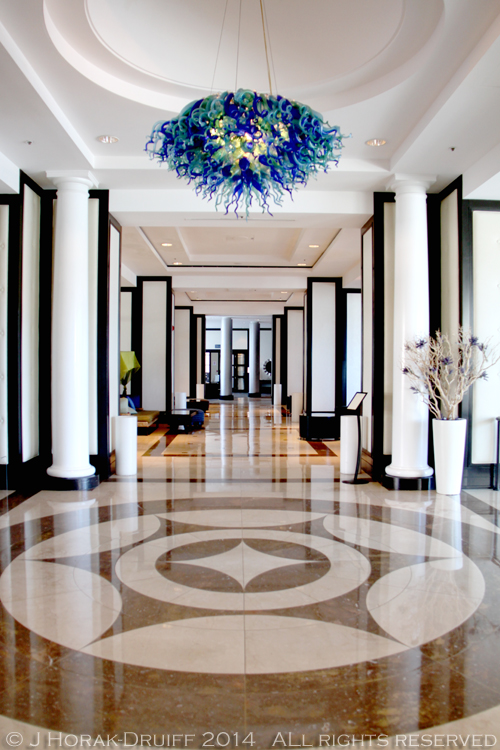 It had been a long journey from my house to San Francisco airport with a broken leg, encompassing a 6 a.m. wake-up, an hour’s taxi ride, a wheelchair to get me from check-in to the Air France gate; another wheelchair ride when I changed planes in Paris, and finally the long transatlantic flight from Paris to California and yet another taxi to collect me from the airport. Much as I was eternally grateful for the luxury of door-to-door cabs and the wonderful free wheelchair transfer service that all airports provide, by the time we touched down in San Francisco on that slightly nervous-making airport built on a narrow strip of concrete extending into the waters of the bay like a chameleon’s tongue, I was not in the mood for any more travelling. The good news was that our hotel, the Sofitel San Francisco Bay, was only a ten minute cab ride away.

Conveniently situated in Redwood City, between San Francisco and San Jose (and close to tech company headquarters like Oracle, Facebook and LinkedIn), the Sofitel San Francisco Bay was opened in the 1980s to provide modern luxury accommodation with the chain’s distinctive French flair.  Built overlooking a peaceful lagoon,  the hotel comprises 421 rooms and suites spread over nine floors, as well as Bay 223 ( their restaurant overlooking the lagoon and serving California-inspired French cuisine), the Bay Bar (serving appetizers and innovative cocktails), and  17,000 square feet modern meeting/function rooms spread over 15 fully-equipped venues catering for groups from seven to 510 people. But the first thing that caught my eye as I walked into the bright and airy black and white marble lobby was none of the above:  it was the delicate Dale Chihuly glass chandelier in every shade of blue from aquamarine through cerulean to midnight blue.  I was instantly smitten. The second thing that made an impression was just how friendly all the staff at the check-in desk were (a recurring theme with Sofitel hotels that I have stayed at).  As my room was not ready yet, the charming duty manager took me on a quick tour of the hotel to show me the outdoor pool area (where the French influence extends to a vintage Paris Metro sign!), the restaurant and bar areas, the meeting room suite (which has its own separate entrance), and the spacious gym which overlooks the pool and is equipped with state of the art equipment including treadmills, stationary bicycles, cross-trainers, weight machines and free weights. 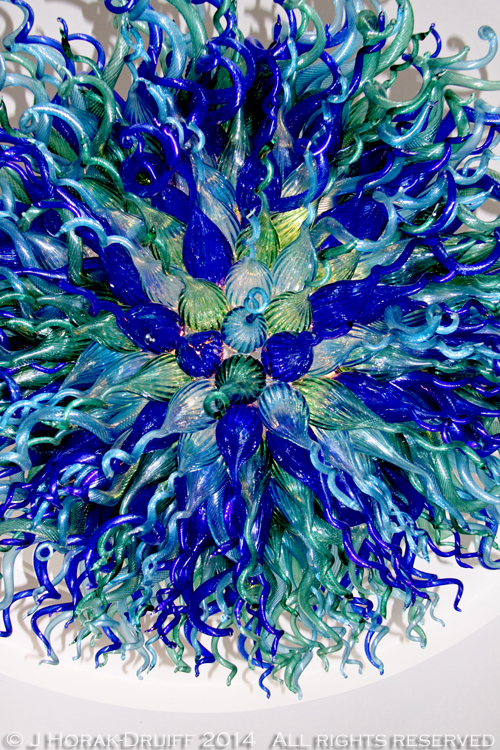 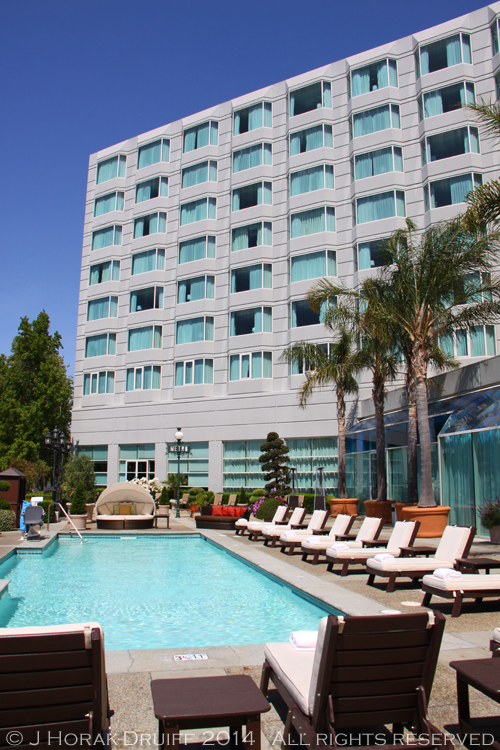 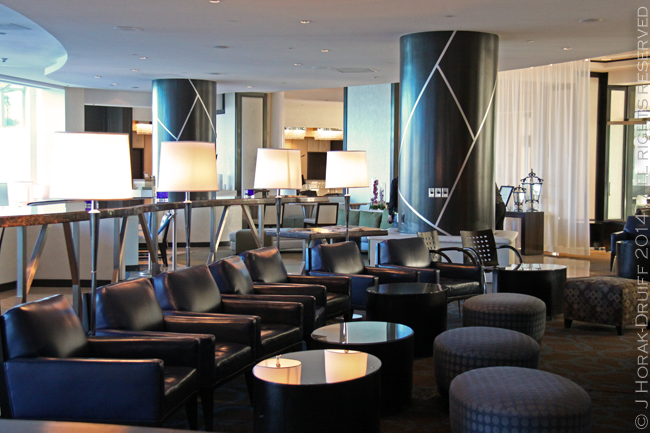 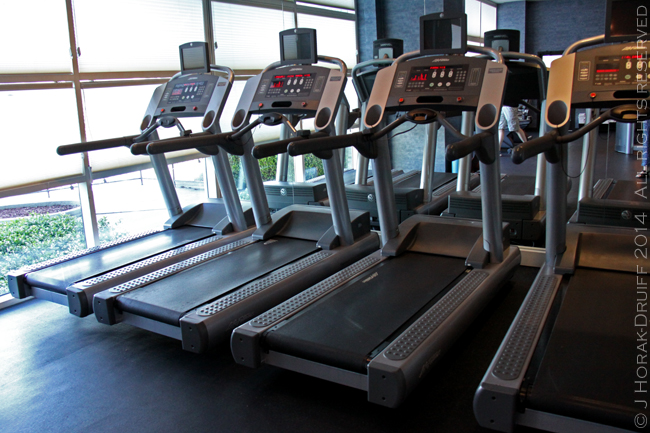 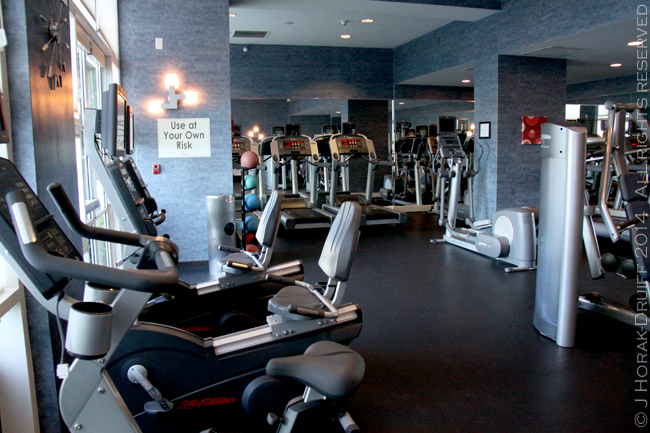 But even having taken time for the tour, it was still not yet 14h00, the official check-in time, and my room was still not ready – so the lovely duty manager upgraded us to a Prestige Suite.  These are the hotel’s premier rooms (one up from the Junior Suite, which is a step up from the standard rooms) and are all located  on the upper floors, ensuring that they are quiet and have great views. Ours had windows on two sides, facing both north over the lagoon and south towards San Jose. The room is impressively large at 65 square metres and comprises a bedroom with separate large lounge with a dedicated desk and chair with phone, power and data plugs all in one place.  The high-speed wireless internet access is free in the rooms and the signal is as strong as it is in the lobby.  Both the bedroom and lounge feature large flat-screen TVs, and there is a Bose docking station for iPods in the lounge.  There is a bar fridge in the lounge and two safes (one of which was large enough to accommodate a full-size laptop) and because one just ain’t enough, there are also two single-cup  coffee machines (a Keurig and a Nespresso). 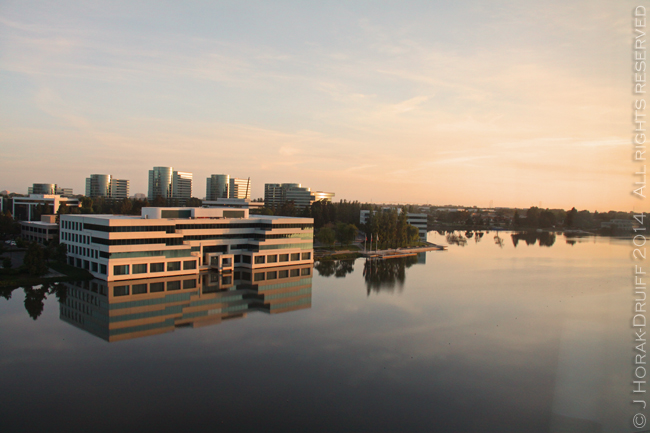 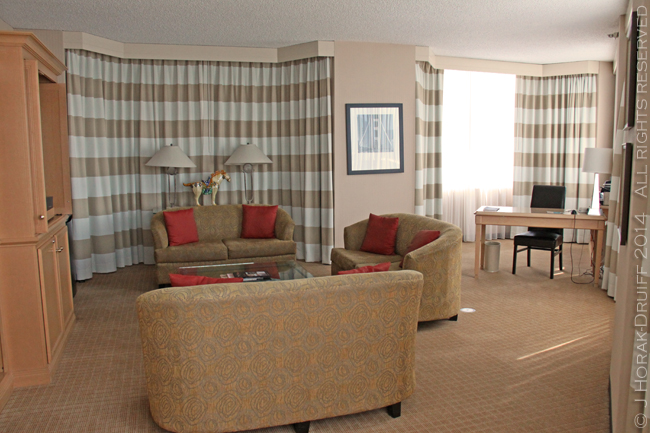 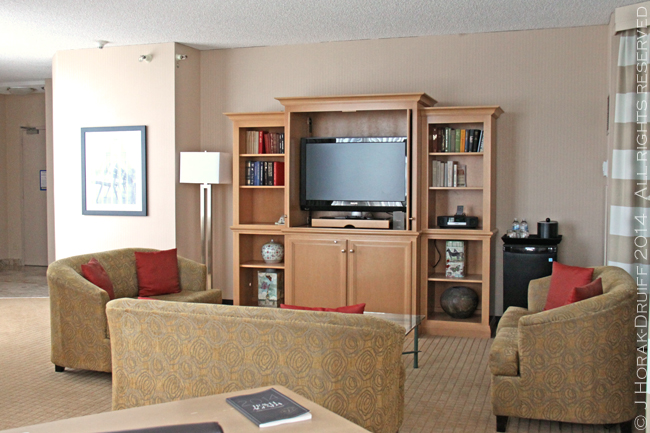 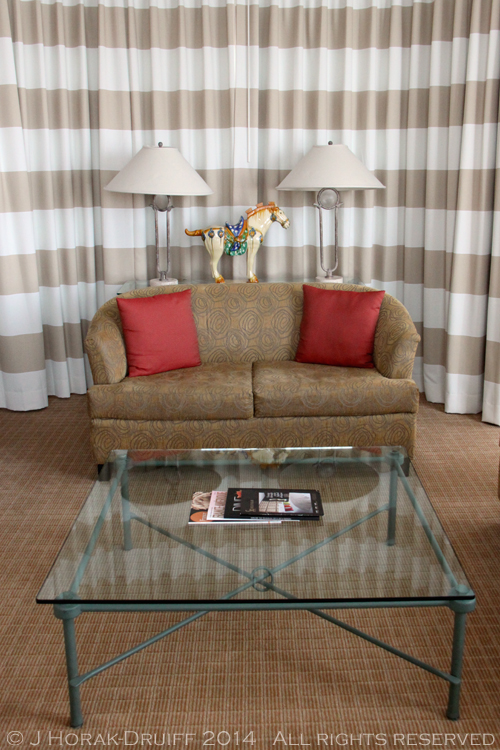 The bathroom features a large oval bath tub as well as a separate shower cubicle, as well as Hollywood-style filament lightbulbs beside the bathroom mirror – all the better for seeing what you are doing with the mascara wand! Instead of the anaemic wall-mounted dryers that many hotels have, there is a proper hairdryer, but surprisingly there was no magnifying make-up mirror.  The towels are big and fluffy and robes and slippers are supplied. Bonus points, too, for the amenities kit which features the usual Sofitel standards (cotton wool pads, emery boards, cotton buds and the like) as well as some rather delectable Les Notes de Lanvin toiletries (the white vetyver body lotion is quite sublime).  There is a king-sized bed in the bedroom (featuring Sofitel’s patented SoBed™ concept mattress specially designed for the hotel group with a higher concentration of springs placed at common points of pressure, like your shoulders, neck and back) with deliciously cotton percale soft linen, and enough space for a sofa by the window as well as the large flat-screen TV. The only surprising annoyance was that there are no plug sockets near the bedside table, so you need to charge your phone overnight elsewhere in the room. 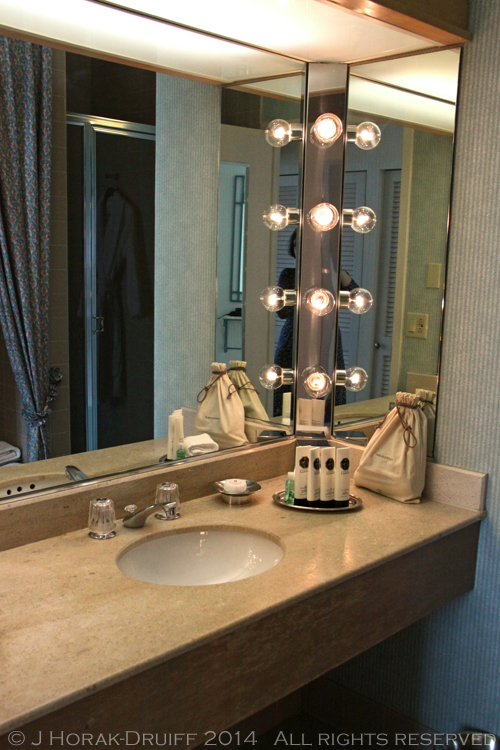 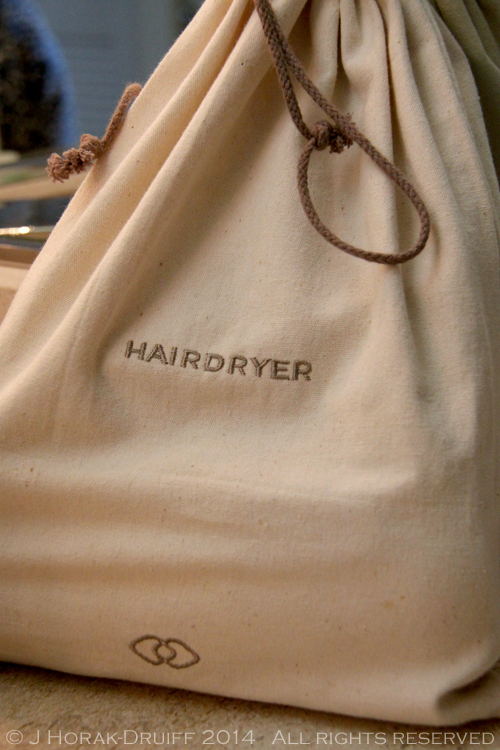 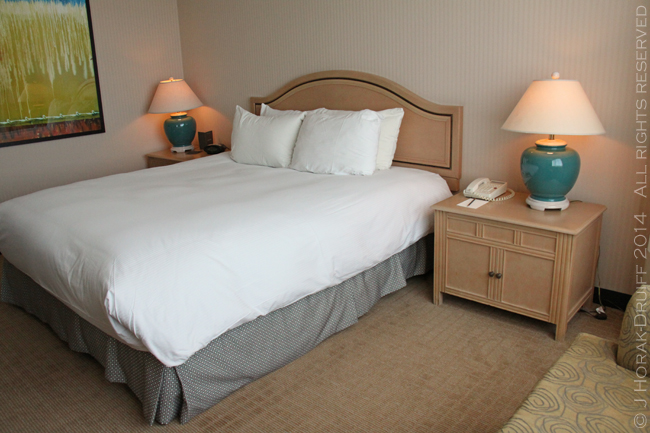 Both days that we stayed at the hotel, we had breakfast downstairs in Bay 223, a serene blue and white space with high-backed blue circular cubicle seating along one wall. Unlike almost every other hotel I have stayed at in the past 20 years or so, they do not have a breakfast buffet (or they certainly didn’t when I was there!) but an a la carte menu only.  French touches abound, from the Eiffel Tower-shaped wire wine rack to the Bonne Maman preserves.  On the first morning I pushed the boat out and had my favourite eggs Benedict, which came on proper English muffins with perfectly runny egg yolks.  The Hollandaise sauce was a little thin for my liking though.  The second day I attempted to be a little more Californian and go for a healthy option:  a soft-boiled egg and a large plate of gorgeous strawberries with plain yoghurt and a strawberry and lime smoothie.  The egg was fine but served in a bowl rather than an egg cup, so there was much chasing of the egg around the bowl as I tried to eat, but the smoothie was marvellous – vibrantly coloured and tangy. 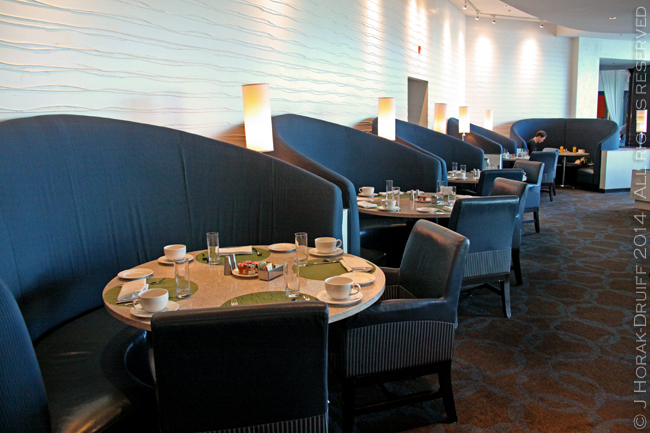 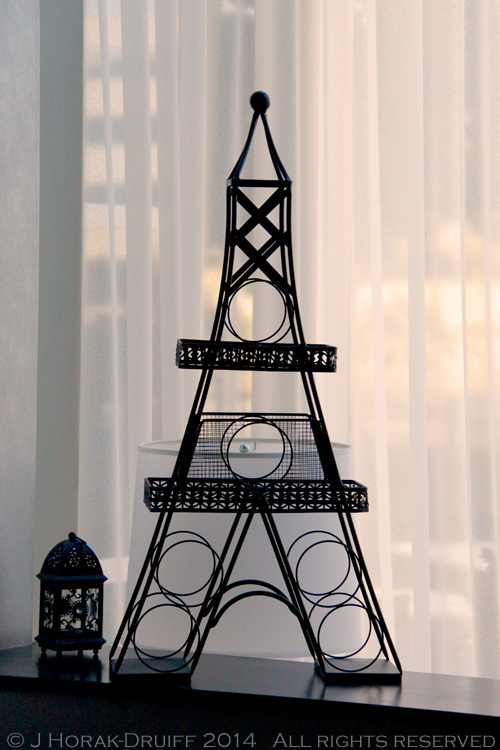 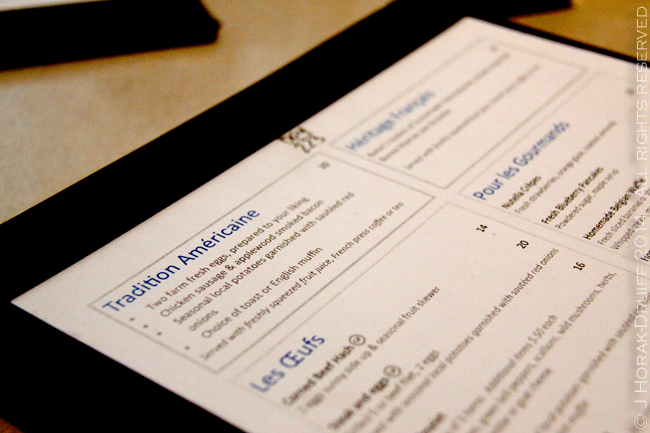 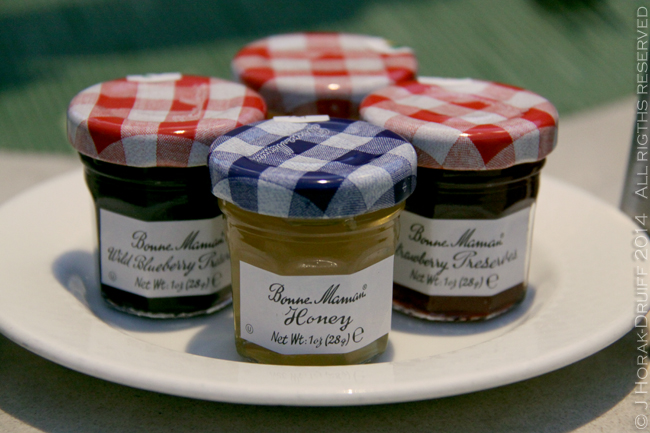 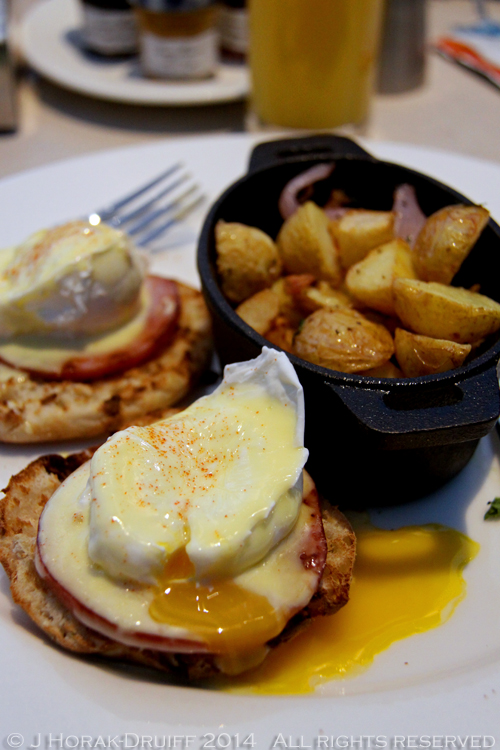 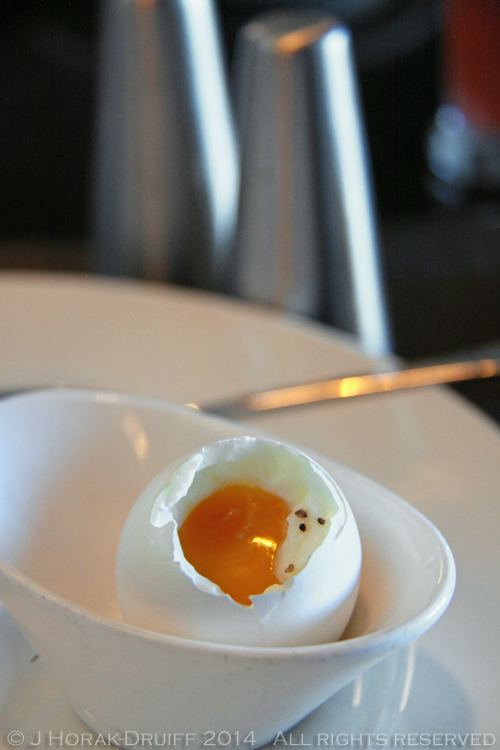 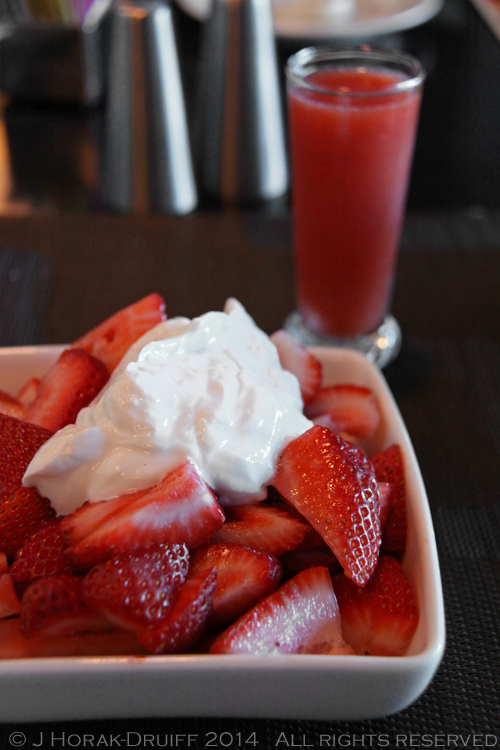 In summary, here is what I LIKED about the Sofitel San Francisco Bay: the generous size of the Prestige Suite; the fabulous SoBed (as always!); the proper hairdryer; the gorgeous toiletries; the separate shower cubicle; the modern and well-equipped gym; the friendly and attentive service from all staff members; the pool (which eve had disabled access); and the convenient location for the airport. And what I DISLIKED was the rather odd decor – although the room was mostly done in pale gold and green colours, there was a pitch black and white lacquered unit in the bedroom that seemed to have been parachuted in from another decor scheme entirely.  I also found a lot of the furniture, especially in the lounge, to be a bit scuffed and probably in need of replacing (there had previously been a leaky fridge in the lounge TV unit and the water damage was extensive and evident if you opened the cupboard).  I also found the lack of bedside plug sockets annoying.  If you are after a hotel in downtown San Francisco, this is probably also not the place for you (although I was quite happy to spend a couple of days on the outskirts of the city).   As it is predominantly a business hotel, there are bargains to be had if you book a weekend stay. Standard rooms (22 square metres, also with king size bed, coffee maker, safe, work station and wi-fi) start from about £120 per night over a weekend (£210 for midweek night); and the Prestige Suite that we stayed in starts from about £190 per night (weekend) or £265 (midweek) – which is an excellent price considering the massive room. Rates do not include breakfast but you can add a full American breakfast at the time of booking for about £20 per day for 2 people. Overall, we had a great stay – the hotel was like an oasis of calm to come back to after a day’s exploring, and there were plenty of options for dining locally (including a In ‘n Out Burger drive thru on the way to the airport!).  Service was great, as it is at all the Sofitels I have been to, and I would recommend it for those who need to stay near the airport, or have business at one of the many tech companies in the area.

DISCLOSURE:  I stayed at the Sofitel San Francisco Bay as a guest of the hotel but received no further remuneration to write this post.  All opinions are my own and I retained full editorial control.

GETTING THERE:  I flew to San Francisco very comfortably, walking stick and all, on Air France via Paris.  They (together with codeshare partners including Delta and KLM) operate several flights per day from London Heathrow and a return Economy class fair starts from about £450 in May, when I travelled.