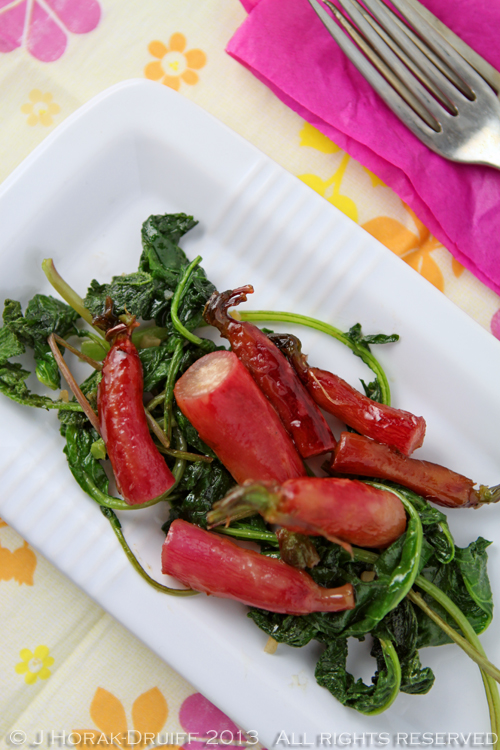 A few years ago, I used to run a blogging event together with by blogging BFFs Andrew and Johanna.  Some of you may remember it: Waiter, There’s Something in My…  Every month we came up with a theme and asked people to make dish that fit in with the theme.  Some were easy:  soup with bits in it (bacon, croutons, you name it); pies; layer cakes. Some were a little more challenging, like meat-free barbecue dishes.  But the one than threw people the most was the sweet/savoury swap.  I came up with the idea to have a theme where people made a traditionally sweet dish from savoury ingredients, or vice versa.  My head was buzzing with inspiration: sweet pizzas or risottos; and savoury tarte tatins or pannacottas.  My own contribution was a heavenly savoury caprese bread and butter pudding – but judging by the number of confused e-mails I received, many other people were simply stumped.

It’s a funny thing, the way we draw a distinction between the sweet and the savoury; the rigid rules of eating savoury food before sweet, and the strict classification in our minds of foods as being traditionally sweet or traditionally savoury.  It’s also surprisingly hard to move things between these categories.  Sure, there are some savoury sorbets and ice-creams being served in fine dining restaurants, but generally speaking I think it is safe to say that ice-cream will always be a predominantly sweet food.  In a similar vein, however wonderful cinnamon sugar potato crisps might be, I suspect that crisps will always be a predominantly savoury food. 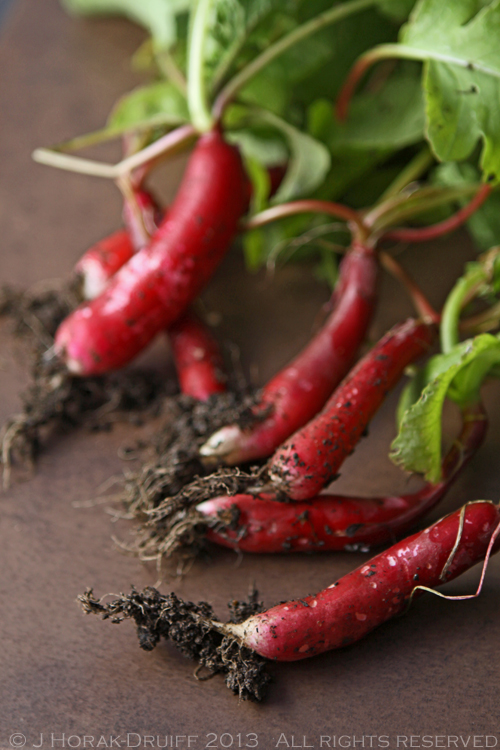 Consider the humble radish.  They’re the cute, peppery little things that are de rigeur in every aspirant food stylist’s fridge (together with pea shoots…!), to be sliced wafer thin on an expensive mandolin and scattered over floral napkins and plates of salad too pretty to eat, right? 😉  Their peppery flavour puts them squarely in the savoury camp, and their prettiness puts them in the garnish rather than the star ingredient camp.  Agreed? Well, not entirely.

Last September we went to France for a friend’s birthday, shopping at the local market and then heading home to cook lavish feasts and drink litres of local wine. Being in the south-west of France, of course there was duck in many forms (foie gras, rillettes, smoked breasts) as well as the usual cornucopia of saucisson and blindingly good cheeses.  But there was also an abundance of fresh produce – tomatoes that smelt of the sun, blushing apricots with furry cheeks, mushrooms that smelt of deep forests, and bristling bunches of those elongated radishes you somehow only tend to find on the continent. When my friend Val picked up a big bunch, I was surprised. “Surely we aren’t going to have THAT many salads before we leave?”.  She just smiled mysteriously and stashed the radishes in her shopping basket. When we got back to the house, she simmered the now-topless radishes in a sweet/salty broth until they softened and the broth turned to syrup, and then served them on top of their own greens, quickly sautéed in butter and garlic.  It was one of the most revelatory dishes I have ever eaten and I could not wait to try it in my own kitchen. 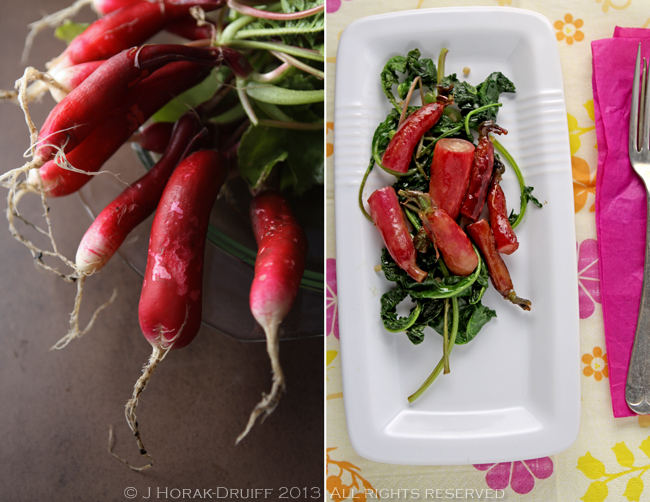 But as I discovered, long French radishes with greens still attached are considerably harder to find in London supermarkets than they are in rural French markets.  Most supermarkets here sell only the teensy round radishes in sad little sealed plastic packets, and they are trimmed to within an inch of their lives – not a green in sight.  Now normal people would get around this by simply looking for a local farmers’ market.  But not my husband.  No – his solution was to acquire a giant allotment covered in brambles and slowly beat it into submission to create a suitable place to grow radishes. The Allotment Diaries warrant their own blog post – but suffice to say that from the start, I made it clear that I already have one excessively time consuming hobby (the one you’re reading right now) and I don’t need another.  But Nick did persuade me at least to propagate some seeds for him, and soon I was cooing over trays of itty bitty baby lettuces, zucchini, broad beans, artichokes – and these nascent radishes with their little heart-shaped leaves. Within 3 weeks of putting the seeds in the trays, we were harvesting them.  Can’t fault radishes in terms of near-instant gratification! And how very different they were to the poor anaemic supermarket cousins.  Robust, positively rude-looking bulbs of small carrot proportions; a bushy head of greens, too prickly for even the slugs to want to nibble on; and more clingy damp earth than you can shake a stick at. But as fresh as it’s possible to get and assertively mustardy. The recipe is a bit of a faff, requiring separate cooking of the bulbs and the greens, as well as careful washing if you grow your own like we did, but it makes up for this a hundredfold in terms of flavour and sheer novelty. The radishes lose their overt sinus-clearing mustardiness while retaining a good deal of their texture, and their glazed salt/sweetness is beautifully counter-balanced by the slightly bitter greens.  If you can get your hands on enough of them, serve the radishes as a substantial vegetable side dish.  If you can’t source enough long French radishes, get yourself an allotment and an energetic husband 😉 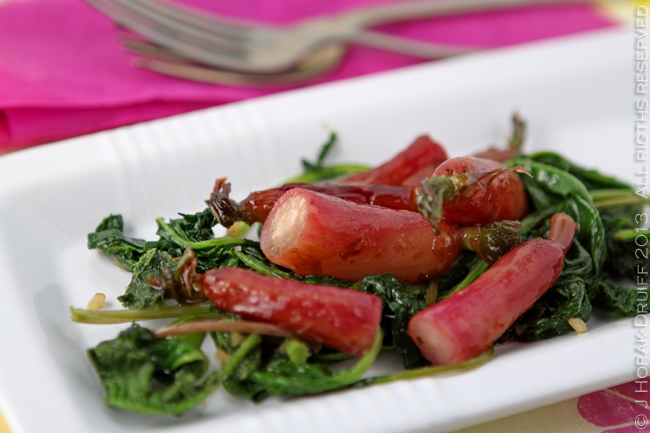