“There are few hours in life more agreeable than the hour dedicated to the ceremony known as afternoon tea.”

So wrote author Henry James and it seems that he is not alone in this sentiment.  If there is anything that cheers the heart of an Englishman (or Englishwoman!), it is a steaming cup or mug of tea, enjoyed at all hours of the day from early morning until shortly before bedtime; rain or shine; alone or in company.  It surely is the quintessential British beverage, and it has been immortalised in the ritual of afternoon tea.  Rather than meaning a cuppa served at some indeterminate point between lunch and dinner, afternoon tea has acquired a rather specific meaning and originated in the early 19th century when the 7th Duchess of Bedford found that the custom at the time of serving dinner between 8 and 9 pm left too long a gap between lunch and dinner.  So to still the late afternoon hunger pangs she would order tea, bread and butter, and cakes to be served in her room. Later on she would invite friends to join her at her home and soon tea parties at home became popular amongst the upper classes.  As the idea caught on, tea gardens and tea dances sprang up, and smart hotels like the Ritz started serving afternoon tea – and just like that, a tradition was born. For a proper afternoon tea you need a selection of tea (never coffee!), a selection of savoury sandwiches and snacks; scones with jam and cream; and a selection of sweet pastries.  Champagne is optional – but I find it makes everything better!

To get in the mood for National Afternoon Tea Week this week, I recently enjoyed a Jersey-themed afternoon tea in the Palm Court at London’s Park Lane Hotel.  Now the island of Jersey is not often thought of as a gourmet destination, but anybody who has visited the island knows better.  Visitors to Jersey can enjoy an abundance of outstanding locally-caught seafood, dairy products from the world-famous Jersey cows, as well as local delicacies like asparagus and Jersey Royal potatoes.  You can even enjoy local wine, fruit liqueurs, apple brandy and vodka from the island’s La Mare wine estate and distillery. To celebrate this culinary heritage, the Park Lane Hotel had put together an afternoon tea menu featuring the island’s flavours, to be served in the sumptuous Art Deco splendour of the Palm Court. The Palm Court is one of the hotel’s original features, dating back to the building’s completion in 1927, and stepping into the high-ceilinged space with its original bar, chequerboard marble floor, gilt ceiling and wall tapestry panels is like stepping back into the the prosperity of 1920s London.  There is even a harpist on hand to transport you back to another era! 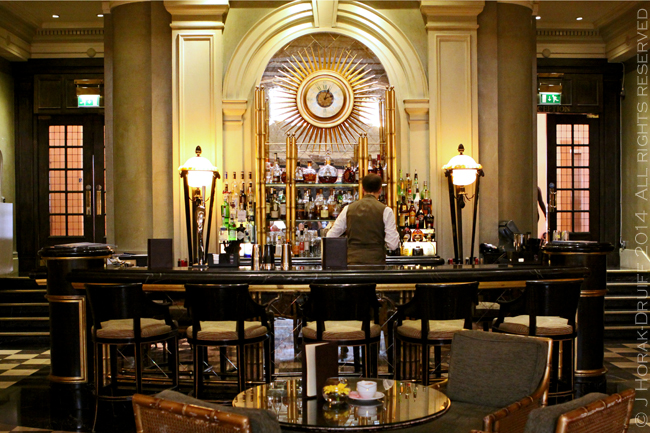 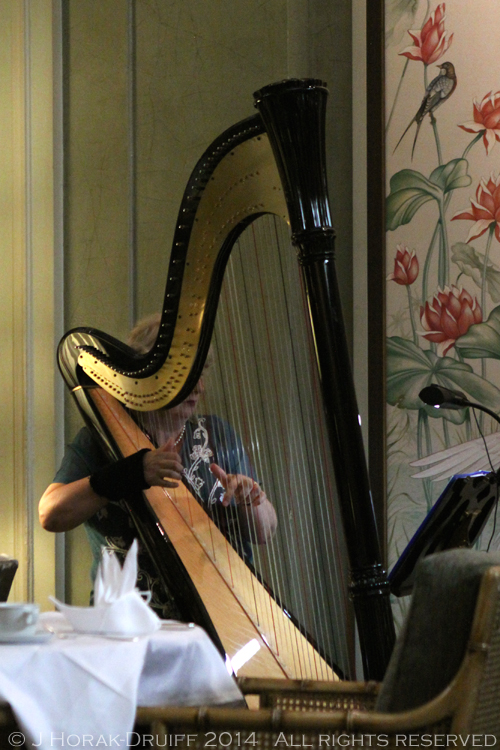 We started with an optional glass of  Moët & Chandon Brut Champagne while we struggled to choose our teas from the extensive menu.  Alongside the traditional English teas (including English Breakfast, Earl Grey, Ceylon and Lady Grey) there was also a selection of herbal infusions (including whole chamomile flowers, fresh mint or whole rosebuds) and Oriental teas (including flowering osmanthus, Oolong and green gunpowder tea) – in other words, we were spoilt for choice! I eventually selected the whole chamomile flower infusion while my friend chose the black vanilla tea.  Both came in sliver teapots and were expertly poured through a gorgeous silver strainer, revealing their opulent fragrances and distinctive flavours. Although the chamomile flower infusion was excellent, the heady aroma and flavour of the black vanilla tea gave me serious menu envy! 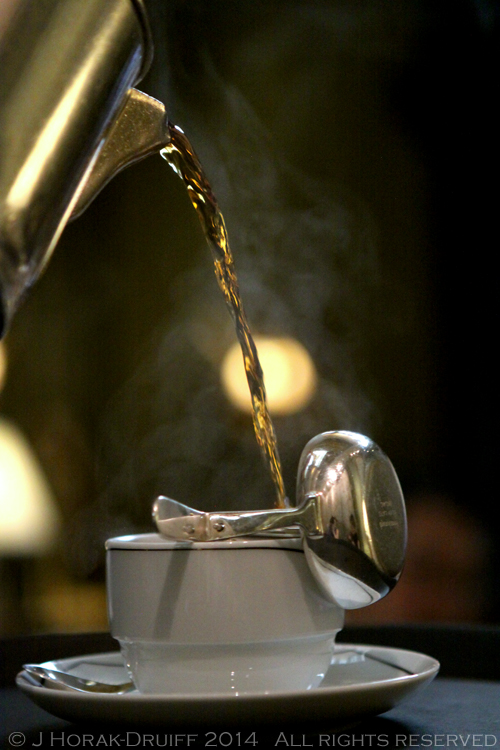 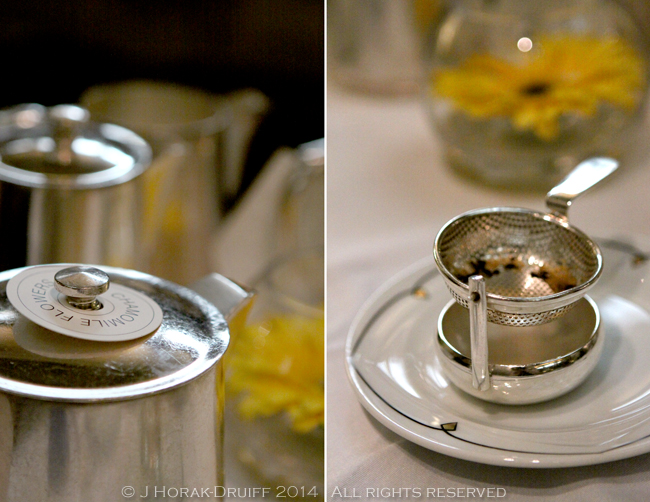 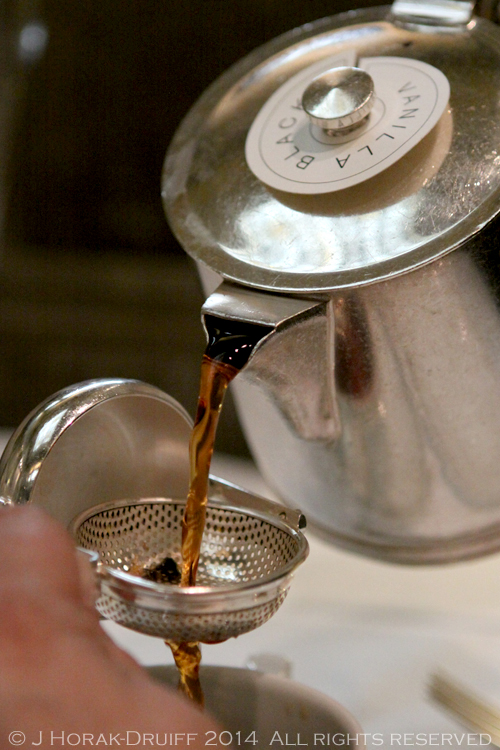 The tea was soon followed by a plate of savoury snacks comprising:

Highlights included the sirloin sandwich (why is beef not always paired with blue cheese??), the wobbly little mini quiche, and my personal favourite, the decadent little brioche stuffed with lobster and lemon creme fraiche. 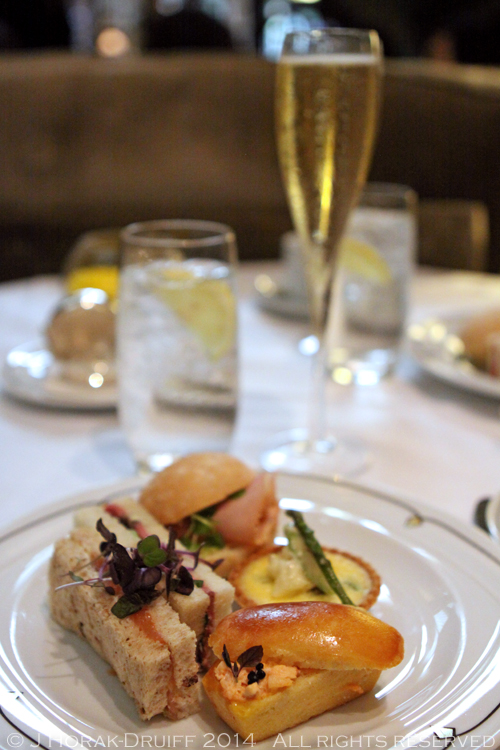 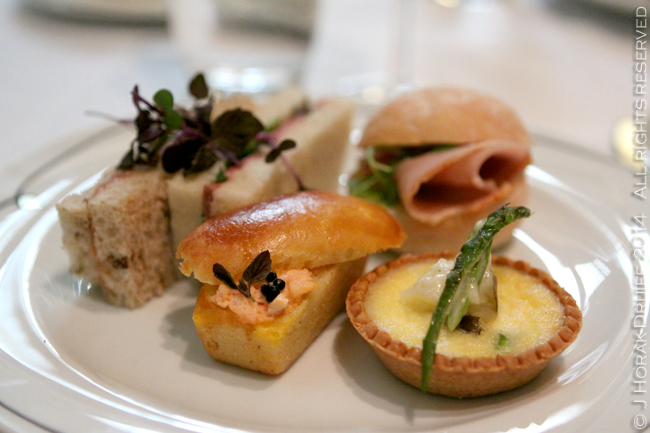 The savouries were followed by scones – both plain as well as apple and raisin scones.  They came with a selection of four toppings, – two fruit preserves (strawberry and, I think, apple and raspberry?), clotted cream and a gooseberry curd. I was sad to see that the traditional Jersey black butter mentioned on their online menu was not available, but all the preserves we had were excellent – especially the vibrant colour of the apple/raspberry preserve.   The scones themselves were textbook with a nice sheen from the egg white glaze and a moist but fluffy interior. 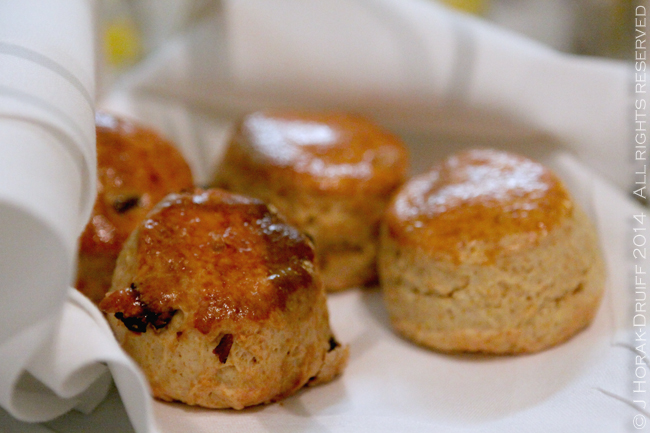 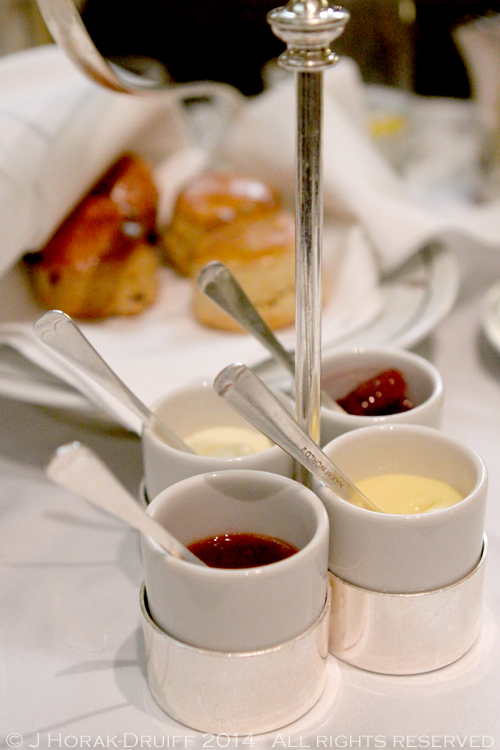 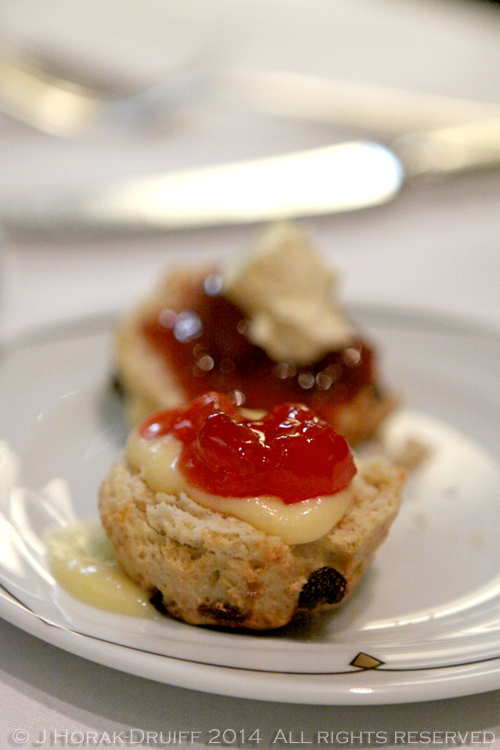 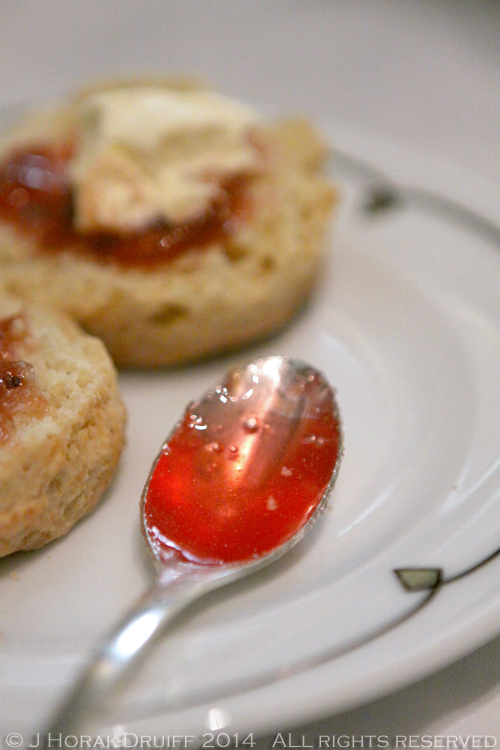 The final flourish was the selection of sweet pastries which included:

The brownie was served, quite unexpectedly, as a layer in what appeared to be a chocolate-glazed slice of cake – so a decadent brownie base topped with a caramel fudge mousse topping and covered in chocolate icing – chocaholic heaven!  The apple brandy liqueur crème brûlée was served in a buttery mini pastry case topped with flecks of gold leaf and was very good, but the black butter biscuit beneath was a bit dry and curiously unappealing.  The cheesecake was a delight – fruity, colourful and blessed with a light, mousse texture.  The gin & tonic jelly was prettily served in a square shot glass, with the clear G&T jelly at the bottom, topped with what seemed to be a lemon pannacotta that had not set properly. The flavours worked well together and I loved the G&T jelly, but the lemon topping might have needed a little more solidity. The other curious thing about the pastries is that there was only one of each, so you either had to cut everything in half or enter into negotiations with your tea companion as to who would have what. 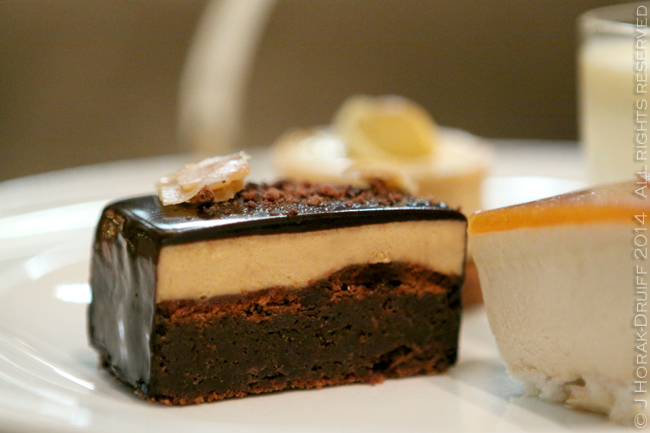 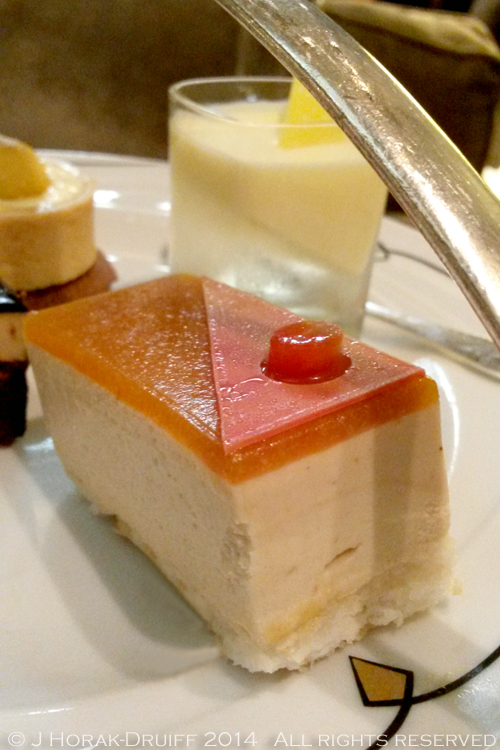 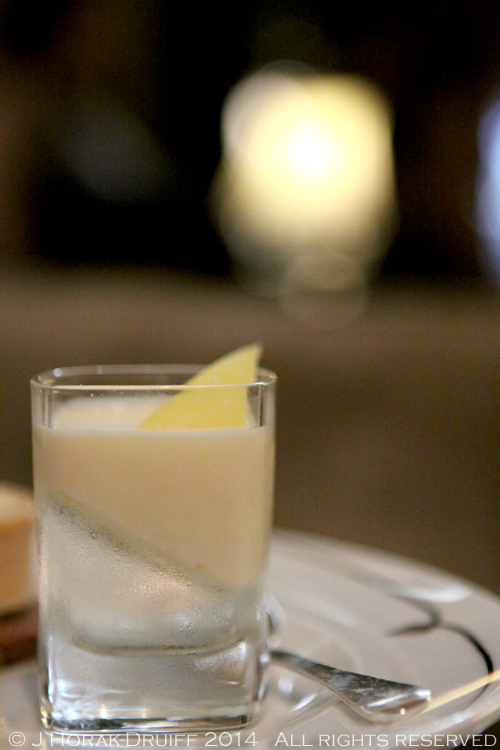 One of the very good things about the Palm Court is that they do not allocate you a limited time at the table – we arrived at 13h30 and lingered until well after four, stretching our pots of tea as far as we could and lingering over conversation and people watching to the sounds of the harpist (who did a wonderful rendition of Michael Nyman’s The Piano theme music which I have always loved).  The Art Deco surroundings were a delight; service was attentive and friendly; and the food and drink were of a very high standard – and I loved the Jersey foodie theme.  Highly recommended as an afternoon treat for Londoners and visitors alike. For another perspective on the afternoon, have a look at my lovely guest Rosana’s post.

Liked:   the Art Deco setting, the harpist, the savouries
Disliked: sharing the sweet pastries
On a scale of 1 to 10: 7.5

Although the Pure Jersey afternoon tea offer is no longer available, you can enjoy their Art Deco tea at £41 per person including a glass of Champagne. And for more information of visiting Jersey to enjoy their excellent food, visit the Jersey Tourism website

DISCLOSURE: I enjoyed this afternoon tea as a guest of Jersey Tourism but received no further remuneration to write this post.  All opinions are my own and I retained full editorial control.