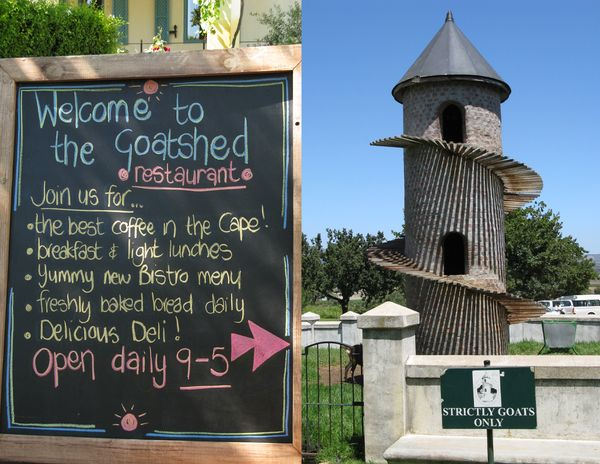 Do you remember what it was like to be a student?  All those late nights followed by dragging yourself to early lectures.  The emotional upheavals of falling in and out of love at least twice a week.  The shrewd evaluation of which of your classmates might have the best course notes, and persuading them to share them with you.  Sneaking in (or out!) after residence curfews.  And of course the constant search for free stuff to supplement your meagre budget.

As a student, I would drive down to Cape Town fairly regularly with various friends and/or boyfriends and we would always make sure to include a daytrip to the Cape winelands on our tinerary.  Seeing as Stellenbosch University is slap bang in the middle of the winelands, wine estates were already all too familiar with the procilivities of students and some of the top wineries had already started charging a fee for tasting, purely to deter groups of students propping up the bar in the tasting room all afternoon enjoying the free wine.  So the search was always on to find wineries that would not charge us for tasting – and thankfully there were quite a few.

I am no longer a broke student, but I have never lost my deep affection for Fairview.  Over the years, all sorts of changes have taken place, including the sprucing up of the cheese tasting venue and the addition of a deli, as well as the Goatshed restaurant which opened in 2004.  The restaurant is named for the farm’s 700-strong herd of goats, which owner Cyril Back bought in 1980 in order to make South Africa’s first goats’ milk cheese on the farm.  Today, both goat’s and cow’s milk cheeses are made and are available for tasting and for sale in the cheese chop.  The restaurant is situated in one of the estate’s old wine cellars and the clay-tiled floors and eclectic collection of old Cape furniture only adds to the atmosphere.  For lazy summer days, tables also spill out onto the sunny terrace, which is where we ate.

The restaurant serves breakfast, lunch and a snack menu to accompany a glass of wine, including their full range of some 25 cheeses made on the farm.  Bread is another speciality and artisanal breads (including ciabatta, panini, rye bread, bagels and croissants) are baked daily.  These can either be enjoyed with some Fairview cheese or bought to take home from the farm shop.  The restaurant is also fully licensed and a range of Fairview wines and Goats do Roam wines (including their cheekily-named Goats do Roam, Goat Roti and Bored Doe) are available.  Although I would ordinarily have been perfectly happy with a bottle of wine and a plate of cheese, our visit called for a proper meal as I was meeting the lovely Kit from Food and Family for the first time – we had both come a long way to meet up and we figured a meal would lend the proper sense of occasion to the day! I recognised Kit immediately from her photo and we immediately fell into a conversation about the menu as if we had known each other for years. The menu saw us spoilt for choice.  Apart from the cheeses (you can put together a customised platter from a separate cheese menu) there were filled bagels and paninis, a great selection of salads, and some pretty substantial meals too, such as waterblommetjiebredie, pork spare ribs, lamb curry and springbok shank. However, we all opted for salads and washed them down with a bottle of Goats do Roam in Villages (a blend of Viognier, Crouchen Blanc and Chenin Blanc, lightly aged in oak barrels). Nick chose the smoked trout salad; Kit opted for the stir-fried springbok salad; and I went for the farm salad with mixed baby leaves, roasted vegetables, cherry tomatoes, toasted seeds, croutons and seasonal fruit (nectarines, in my case).  All three were generously proportioned and as I  tried both my companions’ salads, I can also vouch for the fact that they were all delicious.  I loved mine – not only did it make for a pretty, colourful plate, it was also delicious (and surprisingly virtuous!). Although the dessert menu is super-tempting and features such classics as baked cheesecake, berry Pavlova, tarte Tatin and Cape brandy pudding, I already knew I was going to have dinner at La Colombe that night and so I skipped dessert. But I could not pass up the opportunity of a Fairview cheese platter, so I finished with that.  Each cheese is skewered with a toothpick bearing a little “flag” with the cheese’s name, and the platter is accompanied by a piece of candied naartjie (like a clementine).  My favourites were the fab Chevin soft goat’s cheese rolled in basil and sun-dried tomatoes, and La Beryl (a fairly hard washed-rind cow’s milk cheese with a pungent aroma and a rich, nutty flavour – delicious). My meal, including service and a share of the wine, came to about R120 (about £10).  Paninis cost between R40 and R50; salads between R42 and R75; and more substantial main meals range from R90-125. The setting is lovely, the service good, and not many other restaurants offer the opportunity of buying the wine, cheese or bread that you have just enjoyed as part of your meal… or even meeting the goat that produced your cheese 🙂

A couple of extra pics available in my Flickr album of the Goatshed.