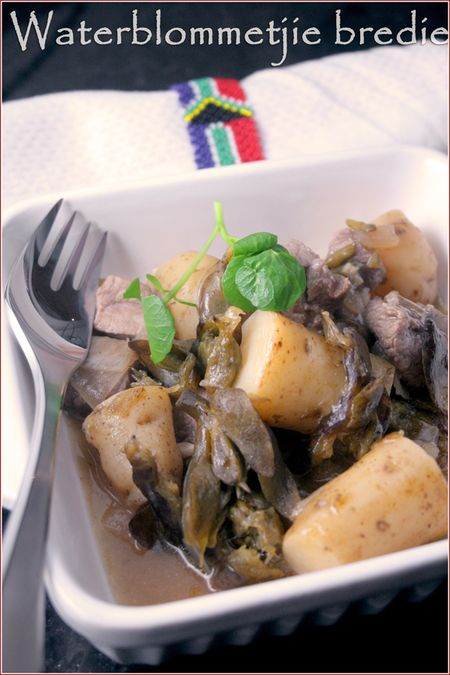 When most people think of edible flowers, they picture a couple of nasturtiums strewn across a salad; maybe a pansy garnish; or some sugared rose petals on a cake.  What flowers are not usually associated with are hearty stews.  That is, unless you come from the Western Cape region of South Africa!

I have written before about the history of South Africa, including the colonisation by the Dutch in the 1600s in order to establish a refreshment station for Dutch East-India Company shops sailing around the tip of Africa on their way to the East.  These colonists did eventually cultivate crops successfully, but for the first few years, things were pretty rough and there was little to eat, particularly since much of what they had had to be given to ships calling at Table Bay.  In desperation, the colonists turned to whatever fresh fruit and vegetables were locally available, and it is thought that this is how waterblommetjies entered into South African cuisine. Waterblommetjies literally means “little water flowers”, but the more scientific name is Aponogeton Distachyos – known in English as Cape Pondweed or Water Hawthorn.  These aquatic plants are native to South Africa’s Western Cape  province but have also been introduced elsewhere in warm, temperate winter rainfall areas. They prefer growing in ponds or swamps which dry up in summer, when the plant becomes dormant.  When the ponds fill with autumn rain, the plant sprouts again.  The leaves are narrow and oval and float on the surface, and the sweetly scented white flowers grow in raised Y-shaped spikes that stand clear of the water.  But if you want to eat the flowers, they need to be harvested while they are still in bud phase, which is typically in the winter months of June to September.

Waterblommetjies have been successfully cultivated in France and the UK as ornamental plants, but nowhere has the idea of eating them caught on as strongly as in the Cape, where waterblommetjie bredie (a stew made from lamb potatoes and waterblommetjies) is a much-loved delicacy.  The texture of the flowers is somewhat like miniature artichoke leaves, but the taste is far more subtle – think green beans with a hint of lemon.  The good news for those of you who want to make this authentically South African dish is that you do not have to dig a pond and start growing – tinned waterblommetjies are available at good South African shops around the world.  If you are using fresh waterblommetjies, make sure to soak the flowers in water first to remove all dirt and creepy crawlies, and cook them for a little longer than you would tinned waterblommetjies.

The recipe below is an amalgamation of a number of recipes that I researched.  Although some call for red wine and chopped tomatoes, I thought I would rather go for a version that played up the subtle green flavour of the waterblommetjies. The cayenne pepper and coriander are not, strictly speaking, traditional but they certainly were a delicious addition.  Most traditional recipes call for wild sorrell leaves to add a sour tang – but as I was unable to find even cultivated sorrell, I added white wine and some watercress instead, which worked perfectly.  I loved the finished product – despite being a red meat stew, it retained an unusual lightness, and the subtle tang of the waterblommetjies was a delicious reminder of home (and so much cheaper than a plane ticket!).

Looking for other lamb recipes to try?  Why not look at: Heat a little olive oil in a heavy-based pan.  Season the meat with salt and pepper and brown in batches in the olive oil.  Remove the meat from the pan and transfer to oven-proof casserole.  Add the onions, garlic, cayenne pepper and coriander and fry gently until the onions are translucent.  Add the onion mix to the casserole (you can deglaze the pan with a splash of the wine, scrape up any bits and add to the casserole dish).

Add the wine, the stock, and the potatoes.  Bring to a gentle simmer.  Cover the casserole dish with a tight-fitting lid and place in the oven to simmer gently for about 60 minutes (or until the meat is tender.

Add the waterblommetjies on top of the casserole and two good handfuls of watercress.  Return to the oven for a further 15 minutes.  Before serving, you may want to thicken the gravy either by stirring in a little cornstarch mixed with water, or by mashing up a couple of the potato pieces in the stew and stirring the mash into the gravy.

I am just squeeeeaking in under near the deadline to submit this recipe as my second entry into this month’s Monthly Mingle, the even started by my gorgeous sister-from-another-mother Meeta.  The theme she selected is South Africa – so how could I resist making something to show off my country’s cuisine to you? FYI, my previous entry was delicious roosterkoek!