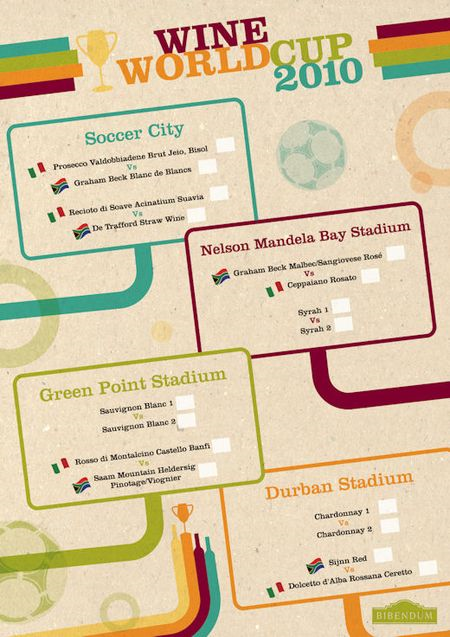 (Photo courtesy of The Bibendum Times)

Well, the Bibendum World Cup of Wine, that is…  And against Italy, no less!

What am I talking about?  Well, about 6 weeks ago wine merchants Bibendum decided it might be fun to do a wine tasting “competition” where countries were pitted against each other on a one-to-one basis and eliminated by way of a knock-out system – rather like football.  Sadly, I only managed to attend one “match” (the final) where South Africa had unexpetedly won through to face Italy – but I was thrilled to be able to be the sole South African representative at the finals, held shortly before the start of the football World Cup, at Bibendum’s headquarters in Primrose Hill.

And so on the appointed night I turned up to find a roomful of enthusiastic wine drinkers, including my friends Denise of The Wine Sleuth, Krista of Londondelicious, Robert of The Wine Conversation and Tara of The Wine Passionista (who counted herself as an honourary South African for the night!).  We chatted and snacked on some rather good canapés from Odette’s (including a fabulous foie gras number), and prepared ourselves for the challenge ahead – sixteen wines, two countries, one winner.  We were up for it.

The premise was simple: we would move around the room to four tasting tables, each named for a World Cup stadium in South Africa.  At each, we would taste four wines – two from Italy and two from South Africa; and of these one pair only would be tasted blind.  Each pair of wines would have something in common (either a cultivar or a style) but might be wildly different vintages.  At the end of the evening, all our wine scores for each bottle would be totted up and a winner declared.  Scientific?  Absolutely not.  Fun?  You bet!

First up were a NV Prosecco di Valdobbiadene Brut Jeio from Bisol (nose and palate of fresh green apples, a fine mousse, pleasant and uncomplicated) pitted against a very different 2006 Graham Beck Blanc de Blancs (golden colour, more toasty & less obviously green palate, and a delicious fine mousse).  The Graham Beck won hands down for me, but it wasn’t exactly a fair fight as it was the more complex wine, with the advantage of bottle age.

Next up were two rosés.  The unusual Graham Beck Malbec/Sangiovese rosé (pale brick colour, meaty nose, very little fruit, clean dry finish) was a Serious Rosé, less for drinking with your girlfriends on a sunny Saturday and more for accompanying a light meat dish when it’s too hot for a red.  The Ceppaiano Rosato (beautiful pale rose colour, shy “cream soda” nose, green apples on the palate) was altogether better proposition for those who like their rosé more girly and fun. We also tasted two Syrahs blind, the first of which was big and alcoholic but not overwhelmingly spicy, hinting more at cherries in brandy with a long, smoky finish.  The second was far more brick red, suggesting an older wine, with an almost savoury, smoked oyster nose, high tannins, not much fruit and a perfumed finish.  The first was my favourite – and turned out to be Italian!

For some light relief, the next table provided two Sauvignon Blancs to taste blind – the first of which was a blast of green bell pepper, both on the nose and on the palate, with a very, very long finish. Its opponent was most peculiar, with a strident cat’s pee nose, undertones on the palate that I usually describe as “cheesy” and a lingering finish – not a good thing in this case!  The other two wines at this table were a 2008 Rosso di Montalcino Castello Banfi (pale garnet, lovely ripe red fruit nose, but sour cherry astringency on palate) and a 2006 Saam Mountain Leeuwenkuil Pinotage (deep purple colour, “meaty”, jammy nose, with lots of up-front dark berry fruit on the palate and a long, very smoky finish).  I am not always a fan of Pinotage, but this one was a goodie.

Up next were two blind Chardonnays.  The first had a lovely vanilla nose with grapefruit and nicely integrated toasty oak flavours on the tongue, followed by a very long vanilla finish.  The second had a far more subtly-scented vanilla nose and was similarly citrusy but with a far shorter finish. I preferred the first and was once again surprised to find that it was Italian!  For the last of the reds, we tasted the 2008 Dolcetto d’Alba Rossana Ceretto  – this didn’t really do much for me as it was a very light red with ripe berry flavours and more much complexity.  I know it was technically correct, but it’s not for me.  Also, it had unfairly heavyweight competition from the 2007 Sijnn Red (an unusual wine not only because it comes from Malgas, well south and east of the established wine-growing regions, but also because of it’s blend which includes Shiraz, Mourvedre and Touriga Nacional).  Unsurprisngly, it is a huge beast of a wine (14.5% alcohol!) with definite port-like characteristics on both the nose and palate, but more surprisingly is that fact that the alcohol is integrated rather than overpowering.  Still, it is a wine that needs a crackling log fire and a venison roast to come into its own, in my opinion, and could probably be cellared for another couple of years for more complex flavours to develop.

And last but not least came my favourites: the stickies.  Italy fielded a 2006 Recioto di Soave Acinatium Suavia.  This had a lovely deep gold colour and a nose laden with apricots.  The palate did not disappoint either – lovely and light with the flavour of dried apricots, honey and candied peel; a nicely balanced touch of acid and a long finish.  South Africa fielded a 2008 De Trafford Straw Wine (the first of its kind in South Africa, with Chenin Blanc grapes laid out to dry on straw/racks before pressing).  Its pale straw colour was probably an indication of its age and gave little indication of the delights that lay beyond – a nose of honey and dried yellow peaches; and a palate with less obvious fruit but an abundance of nutty, honeyed flavours (and those peaches again), with a ridiculously long burnt caramel finish.

A few nervous moments followed while the scores were tallied up, and the tension was drawn out by first naming the wines we’d tasted blind.  The contest was neck and neck when the stickies were served and then… South Africa stormed ahead, gaining a 20 point lead over Italy on one single wine and therefore taking the trophy.

Thanks very much to all at Bibendum who organised this great event.

And in other CookSister news…

I keep meaning to tell you that a while back I was interviewed by Bizy Moms about family cooking – do pop over and take a look!

I was also interviewed by the Canadian National Post newspaper for an article about barbecue traditions around the world – specifically South African ones!

And I am thrilled to see that pictures of my famous muffcakes that I made for a Lurpak photoshoot late last year are now cropping up on the inner wrapper of Lurpak Spreadable tubs.  Get yours while you can!