Despite the fact that we have had nothing but dark clouds and rainstorms around here lately, rumour has it that summer has in fact arrived in the British Isles.  I can tell it by the way the poppies have exploded in my garden (to the delight of visiting bumblebees!) and I can tell it by the sauna-like underground trains, but I sure can’t tell by the amount of sunshine we are getting!! While you are reading this, I will be in South Africa to celebrate my dad’s 85th birthday and according to the weather forecasts, mid-winter South Africa is expected to be warmer and sunnier than mid-summer London – go figure.

But even though there’s no sun, we are still having pretty hot, sultry nights and what I most often crave when I get home after work is a salad.  Now I must confess – I adore salads.  Leafy salads, potato salads, crunchy salads, vegetable salads, meaty salads – bring ’em on.  But what I love more than anything is a salad that I did not make myself.  Classic Caesar, salmon Caesar, cajun chicken, crab & avo, waldorf, Nicoise… I love them all.  But the problem arises when we are eating at home.  You see, the trouble with living with my hollow-legged and permanently ravenous husband is that for him, a salad does not count as a meal.  It’s merely a bit of crunch to accompany The Main Event, which means that I have to make a whole meal and then a 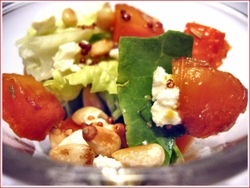 salad and often after work the idea of this final labour-intensive step makes me lose the will to live.  So we probably don’t have salads at home as often as I’d like, and when we do it’s usually a plain tossed salad.

But trawling the web the other day, I came across Salad ‘Stravaganza, a fab one-off event hosted by Lisa and Kelly, and I decided that this was the perfect excuse to make a salad that I’d been picturing in my head for quite some time now (I’m sad that way…).  I have often spoken of my love for butternut squash, and I have been known to trek all the way out to Wood Green to get the tins of Turkish feta that I love.  And I have combined these two ingredients before, in a quiche.  But how about a salad?  And so from this little acorn of an idea grew a mighty oak:  my roasted butternut, feta and pine nut salad!  I have to say, this one’s a keeper – the sweet squash, the salty feta and the crunch provided by the leaves and nuts is a sublime combination.  I served mine with a wholegrain mustard vinaigrette, but substituted the brine from a bottle of peppadews instead of vinegar – this added a lovely spicy-sweet tang to the dressing.

I used half and half of round (or butterhead) lettuce and cos, mainly because that’s what I had available, but I rather liked the crunch of the gem and the comparative softness of the round.  You could also use baby spinach leaves.  I used the neck of the butternut as there’s less seeding that needs to be done and it’s easier to cut into neat cubes of about 1/2 an inch.  With enough crusty bread, this would make a nice light lunch. 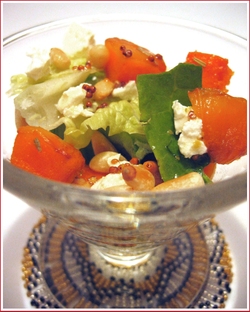 Round (butter) and cos lettuce
Half a butternut, peeled, seeded and cubed
olive oil for roasting
1tsp dried rosemary
1/4 cup of pine nuts
100-200g of feta depending how much you love it!

Pre-heat the oven to 200C.  Prepare the butternut as cubes and place in an oven-proof dish, toss in olive oil until coated, sprinkly with rosemary and roast until soft and turning brown at the edges.  Drain on kitchen paper and allow to cool.

Toast the pine nuts in a non-stick pan, watching them carefully and stirring lots as they burn very easily.  Remove when starting to brown and smelling wonderful!

Wash and dry the lettuce.  Tear the leaves and place in a salad bowl.  Stir in the cooled butternut and crumbled feta cheese and sprinkle with pine nuts.

Mix all the dressing ingredients together in a bottle and shake well.  Pour over salad before serving.

Here are some more delicious salads that feature on Cooksister: