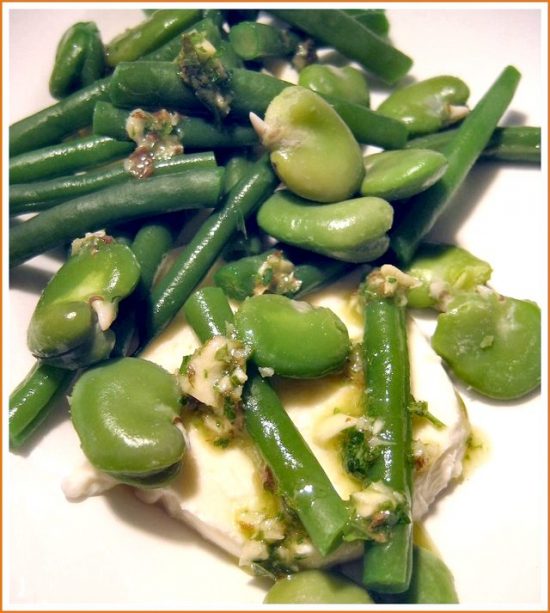 Thanks to global warming, it appears that UK winters are getting milder and milder, and summer is lingering longer and longer.  Of course, this is a scary development.  But I do feel a guilty pleasure at being able to sit outside on a balcony in Brighton in the last weekend of October, having an al fresco lunch!!  It also means that seasonal produce is available for longer, which is a great thing in my book when it comes to… broad beans.

I don’t know why, but broad beans were not something we grew up with in South Africa.  I presume the must grow down there (green beans certainly do!), but the are not in evidence in the supermarkets, and I didn’t know a single recipe for them until I got here.  And the reason why I initially bought them was because I was sick of buying little teensy fine green beans from Kenya – much as I adore the little things, and much as I’m sure it’s good for the Kenyan economy, I fail to see why it’s necessary to import them when we can quite easily grown green beans right here in England!  So when I saw that the broad beans were a) on sale and b) from the south of England, I bought a bag.  I only started worrying about how to cook them when I got home – and by then it was too late! Broad beans (or fava beans as they are known in the USA) are among the oldest foods that we cultivate.  They are also, interestingly, members of the genus Vicia, unlike almost all other beans that we eat which belong to the genus Phaseolus.  They are in fact much more closely related to the pea than to other beans.  The differences include the fact that broad beans originated in Europe and the Middle East, while the beans from genus Phaseolus all originated in the Americas.  Things you didn’t know you didn’t know!  Maybe that’s why I never saw them in South Africa – they prefer a cooler climate…  Anyway, they have been cultivated and eaten since ancient times and in fact, they are the subject of a long-running debate.  The Greek philosopher Pythagoras in in the 6th century BC instructed his pupils to avoid fava beans and this spawned centuries of debate and reams of theories as to his reasons.  But one of the most sensible explanations is the fact that in some people (those suffering from the genetic deficiency known as favism), eating raw broad beans can provoke a serious allergic reaction (severe haemolytic anaemia) and could lead to death.  The condition is particularly prevalent in Mediterranean areas – precisely where broad beans were grown and eaten.  So why did people carry on eating them if they had the potential to kill?  Well… because it turns out they contain quinine-like compounds and could provide protection against malaria, long before Lariam appeared on the scene!  Research now hints that they may also relieve the symptoms of Parkinson’s Disease.  And you thought all they did was give you gas…

The first thing that struck me about broad beans is that if they were a ready-made snack food and they used as much disposable packaging as they do, there would be a national outcry!  You literally throw away more than you use.  First off, you have to pod the beans.  The pods are between 3 and 6 inches long, fat and bright green.  So you split those and find the beans nestling in what can only be described as a fluffy white blanket.  It’s really pretty… but don’t get too attached to the pods as you throw them away (I have found some unconfirmed reports that the pods are toxic, should you have the sudden urge to nibble on one…).  Then the beans need to be blanched, and after that – guess what, you peel them some more!  The two halves of each bean are held together by a greyish, fairly tough shell and if you want to taste the sweetness of the beans (and definitely if you plan to mash them), this shell needs to be removed.  So you end up throwing away about 2/3 of the weight that you bought – and probably more by volume!  But the podding is quite relaxing and the beans are, to my mind, worth the effort.

The recipe below is the first thing I ever made with broad beans – and unsurprisingly it is a Nigel Slater recipe, lifted out of the Observer Food Monthly Magazine.  I just read it and fell in love!  I first made it last summer at a lunch party for Johanna and her lovely family, and served under our tree on a sunny afternoon, it made a near-perfect summer starter.  Its vivid green colour just says “summer” and the contrast between the crispy green beans, the floury broad beans and the creamy mozarella works exceptionally well.  With warm, crusty bread, the recipe below would probably also make a light lunch for two.  And make sure you get the best quality ingredients you can find/afford – there’s nowhere for a dodgy ingredient to hide here! 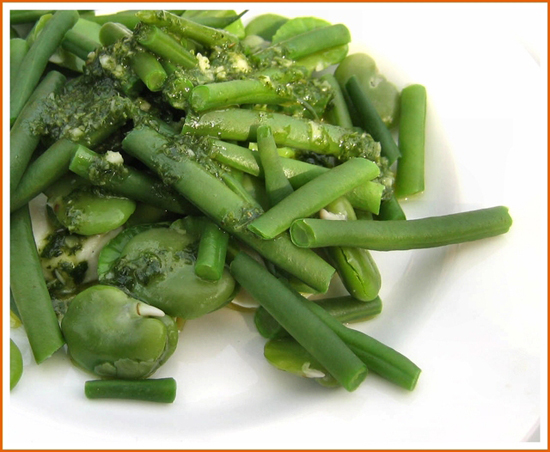 Top and tail the green beans and cook in salted boiling water for 3-4 minutes till tender, but retaining some crunch.  Drain them and rinse under cold running water.  Pod the broad beans and boil for 7-8 minutes, then drain, rinse and set them aside.  Unless they are exceptionally young and tender, pop them out of their skins – the salad will definitely taste better for it!

Whisk the basil, oil, vinegar and garlic together in a blender to make a smooth, green dressing.

Cut the mozzarella into thick slices and divide equally among the plates.  Scatter the beans over the mozzarella and drizzle generously with the dressing.

Me, turning around and walking out on 2020 like a

One last look back at the kettle of crazy that was

So how was your Christmas day yesterday? In this