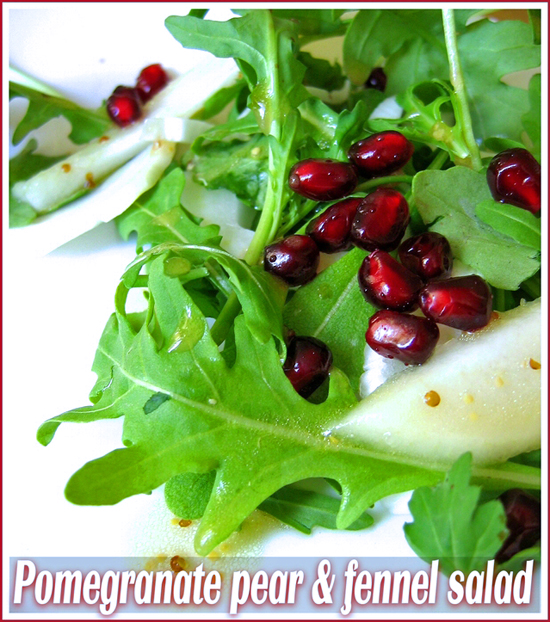 I have to admit that I am something of a salad slacker.  Not to say that I don’t love salads – on the contrary, I do!  But the problem is that by the time I have finished faffing around with the main course, I am not in the mood for dreaming up an exotic salad, so we end up having the absolute standard lettuce, cucumber, tomato, onion and bell pepper salad (and anyway, I think this is secretly the salad Nick prefers!).  I am also somewhat of a slacker when it comes to seasonal eating.  Partly, I blame this on a kind of seasonal jet-lag induced by living in a hemisphere where you didn’t grow up.  I still remember strawberries as being associated with Christmas and being off the shelves by my birthday in March, or loads of oranges and satsumas being available in the chill of June – just in time for rugby players to get orange wedges to snack on at half-time 😉  So let’s just say that my food cravings are often out of synch with the northern hemisphere seasons!!  Of course, you can get any fruit at any time of the year in London, but I have discovered that no matter how tempting those imported December strawberries at Waitrose might look, they will disappoint you in terms of taste 🙁  Not to mention the food miles issues!

A couple of weeks ago, I had some friends over for lunch and while wandering the aisles of my local supermarket seeking inspiration, I found a pack of chicken livers.  Yaaaaay!  I know, I know, I need to get out more… but you must understand that up to now our local supermarkets have stubbornly not sold chicken livers!  I am used to South Africa where chicken livers take up a yard-long stretch of the chest freezers in most supermarkets and are never a problem to obtain, but out in the wilds of E16, some marketing genius has obviously decided that there isn’t enough of a market, so they don’t stock them.  Until now!  I was so overjoyed at finding them in our local Sainsbury’s that I bought a few packets and immediately decided to make a chicken liver paté starter for the abovementioned lunch.  The immediate next question was what to serve with the pate.  I definitely wander something light and salad-ish, but I also wanted it to have fairly strident flavours to stand up to the pate.  And maybe a touch of sweetness would work with the paté.  Oh yes – and a seasonal hat-tip would be nice too 😉 I found my sweet inspiration in the fruit aisles a few minutes later… 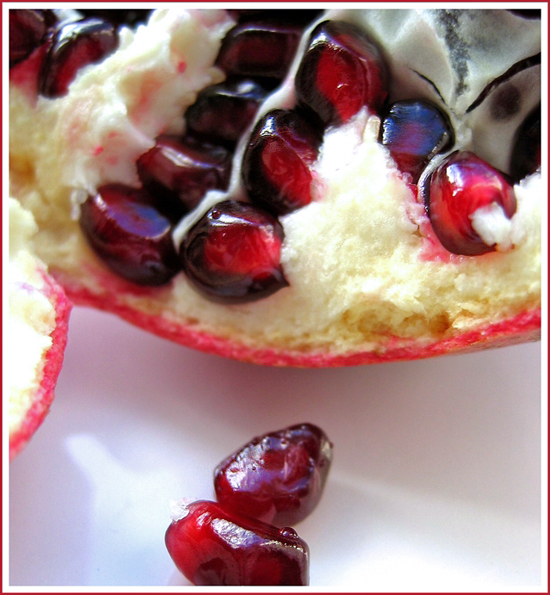 Pomegranates.  One of the fruits that evoke (in me, anyway!) visions of Arabian nights; of biblical stories; or Nazarene princesses languishing in the Alhambra.  And that’s probably not far off, as it’s an ancient tree that is mentioned in the Old Testament and has in fact given its name to the beautiful city of Granada (all the manhole covers have stylised pomegranate fruits embossed on them!).  Although it’s not really grown in England, it does grow in nearby Spain and is in season in the middle of the European winter.  Perfect!  The fruits are probably about the size of an orange and (to me) look a bit like red guavas.  They have a range of uses – it seems the flowers, seeds, fruits and bark can all be used for something, but it is usually the red pulp surrounding the seeds that is eaten (or made into currently vogueish pomegranate juice).  I had never actually dealt with a whole fruit before but I had heard that getting to the seeds is quite a production – and they are not lying.  In terms of wasted “packaging”, I would say the pomegranate is the fruit equivalent of the broad bean:  you discard a lot more than you eat!  First comes the decision of where to slice into the whole fruit (I elected to lop the top off till I had penetrated the rind and pith down to the seeds).  From then on, you have to go at it with your fingers, breaking open the polystyrene-like bitter white pith and carefully extracting the seeds, which come wrapped in an absolutely lovely ruby-red translucent pulp.  If you feel so inclined you can remove each teeny seed from its pulp but I would say it’s like pipping grapes – really not worth the effort.  The taste is sweet but with an delightful astringency and the juice is as blood red as can be.  Just gorgeous.

The next question was what to add to these little ruby beauties to make my salad.  I wanted something crispy, something distinctly savoury and maybe something sweeter.  So in the end, I came up with the pomegranate, pear, fennel and rocket salad you see above.  The flavours and textures worked terrifically well together and oh man, it was pretty!  Plus I believe that English pears are also deemed to be seasonal at the moment, so I got in a second seasonal bonus point 😉 And drizzled with a little homemade raspberry vinaigrette dressing, it made a great partner for the rich paté.  Definitely a keeper!

Print
Prep time
15 mins
Total time
15 mins
A salad that's quick to assemble but will impress guests with its rich flavour, texture and colour.
Author: Jeanne Horak-Druiff
Serves: 6
Ingredients
Instructions
Notes
The dressing makes a lot - keep it in the fridge in a sealed container and use for up to a week.
Wordpress Recipe Plugin by EasyRecipe
3.5.3251