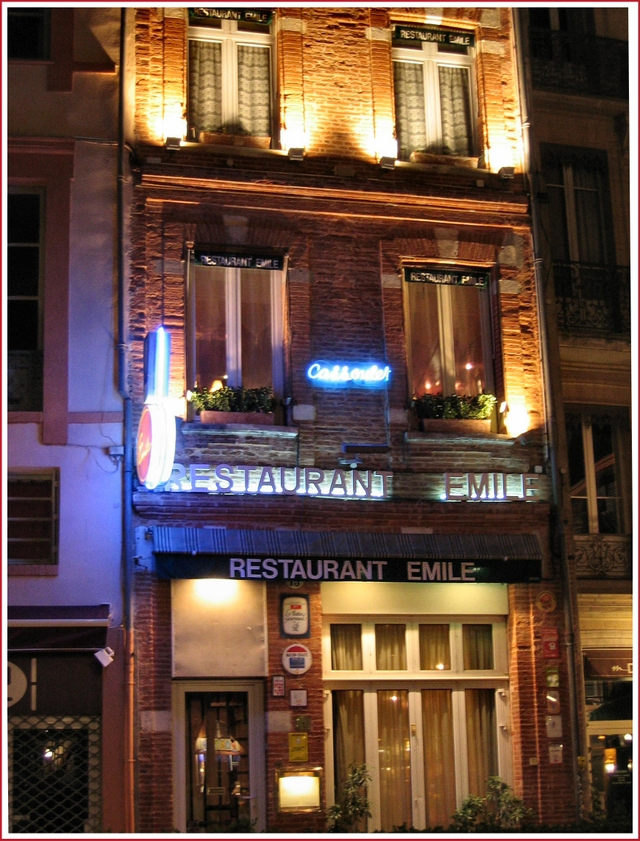 Can somebody please tell me how on earth I lived before the internet??  Apart from all the wondrousness of blogging (and that’s a lot of wondrousness, believe me!), it’s completely revolutionized the way I travel.  I am probably of the last generation that will remember total dependence on travel agents. You decided where you wanted to go and then they took over – suggesting hotels and itineraries and possibly even restaurants – and you meekly obeyed!  Never mind the person in question had probably never been there, or might not share your taste in hotels or food…  But now, it’s a whole new ballgame.

Nick and I decide on a destination and what follows is a frenzy of internet research – STATravel or Majortravel to find flights, and Tripadvisor to find a hotel, and then extra research to find a restaurant.  Now Nick is of the school of thought that I should leave the restaurant to chance – why can’t we wander the streets until we find something that takes our fancy?  Sometimes I leave it at that and occasionally it works out fine.   But there are also memories of walking around Venice until the restaurants were beginning to close because we simply could not find anything that looked nice or suited our budget! Suffice to say that, more often than not, I take the former route and plan meals down to the last crumb 😉

When we decided to spend a night in Toulouse earlier this year, en route to Andorra for a ski trip which I was dreading like root canal work (much more on that later!), I knew we would be arriving late – so not much time to muck about finding a restaurant for dinner. And anyway, I was planning my last pre-ski dinner with the fervent intensity of a condemned man ordering his last meal…   I was going to the South-west of France, i.e. Global HQ of Cassoulet and Foie Gras, so I wanted to make sure I got a good example of the local speciality. What some internet research revealed is that there is a restaurant in Toulouse that is so well known for its cassoulet that it was commissioned to make the cassoulet for the launch dinner of the Airbus A380, Toulouse’s most famous non-edible export. So that was the end of any discussion: decision made!

Restaurant Emile has been around for a while – it opened in the 1940s as a working-class family restaurant called Emile but it subsequently did a bit of social climbing and was reincarnated as Chez Emile under new owner Francis Ferrier.  In 1999 Francis handed the reins to his nephew Luc Thibaud, the current owner.  The kitchen run by chef Christophe Fasan whose style is a contemporary take on traditional regional foods.  It is located on the rather pretty Place Saint George in a tall and narrow but unprepossessing building – I might not have looked twice had I not read up on it. Once inside, though, it’s lovely.  There is a long room with exposed brick walls and tables in a sunny red and yellow colour scheme. There is also a room upstairs which is apparently more sought after, but having booked less than a week previously, I was quite happy with a table downstairs.  Having seated us, we were allowed a generous period to peruse the menu and take stock of our surroundings, and in the back of my head I started thinking oh dear, we’ll never get fed within our two hour window… but then you remember that you’re not in a chi-chi London restaurant and that they wouldn’t dream of kicking you out after two hours!  We perused the menu which is like a greatest hits parade of all the wonderful things a French bistro can produce, but what with this being Toulouse, I only had eyes for one thing:  cassoulet.  There was a tasting menu that was incredibly well-priced and Nick gallantly offered to join me if I wanted to try it, but there was no cassoulet on there.  So I decided uncharacteristically to avoid the tasting menu and go for cassoulet.  Although many French restaurants in Paris will offer cassoulet as part of their prix fixe menu, it usually comes at the expense of a hefty supplement, as does foie gras.  Or the prix fixe will include on and not the other.  But this, my friends, is the south-west and these are their signature dishes.  So just imagine my delight when one of their prix fixe menus was foie gras, cassoulet and a dessert of your choice!  No supplement!  No compromise!  Just my two favourite French foods! Could life get any better?  We placed our order and them threw ourselves on the Sommelier’s mercy when it came to choosing a wine – it was wonderful full-bodied red from Gaillac and a perfect match for the robust flavours of the cassoulet. 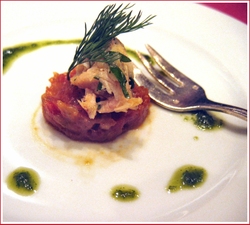 First to arrive was our amuse bouche – a little blob of tomato concasse topped with brandade of crab and drizzled with a pesto dressing, which was perfectly delightful with sweet red tomatoes pairing well with the saltiness of the brandade.  Delicious.  Nick started with a salad of marinated anchovies, tomatoes and boiled eggs which he pronounced to be delicious. And for me came… the foie gras.  I am a sucker for this stuff and I fear that in my lifetime it may end up being banned pretty much everywhere outside of France.  As somebody who has never smoked, done drugs or indulged in anything particularly risque in any aspect of her life it is a source of wonder to me that I now have one controversial habit – a foie gras habit!  At a bbq with 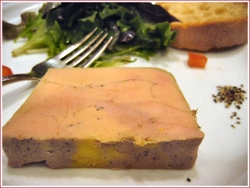 friends a few weeks ago I mentioned having had foie gras at a restaurant and was immediately verbally attacked by one of the guests – how could I?! Never mind that the chicken kebab he was eating helps to sustain an industry that far outweighs the evil of foie gras in terms of the extent of suffering.  But moving rapidly along.  The foie was served mi cuit (half cooked – the fresh foie is cooked very slowly and at a low temperature in a terrine to develop a complex texture and flavour) in a generous slab with a slice of toasted pain de Campagne.  And it was g-l-o-r-i-o-u-s, with the firm yet melting texture and delicate flavour that I love so much.  This was seriously high quality stuff and one of the nicest examples I have had – my only minor quibble was that I like something sweet to go with my foie, but this particular plate was devoid of sweetness. Now, I have had a couple of cassoulets in my time.  It is a dish that endlessly fascinates me – how such essentially humble ingredients can be elevated to something so truly sublime and rib-stickingly good.  Because it really is basically pork & beans!  But oh, what delights await.  The name comes from the cassole or earthenware dish in which it is cooked (also the root of the word casserole, incidentally) and the dish is regarded as one of the aristocracy of French regional cuisine.  There are a number of stories about how it was invented, with the most popular being that it came about during the Hundred Years War at Castelnaudary, when beseiged villagers made a hearty dish of what they could find within the walls (manily pork and beans!), ate well and thus revived, stormed out and defeated the English beseigers.  Whether or not beans had been introduced to the country at this stage of history is neither here nor there 😉  In any event, it is probably France’s best-known dish and probably deserves a post all to itself.  So how was my example?  Oh.  My.  The word unctuous is the only one that springs immediately to mind.  The surface had gone that wonderful sticky consistency of something that’s spent a long slow time in an oven, and once you got a spoonful out, you could see that the slow cooking had released all the gelatinous goodness in the pork rinds and formed a deliciously sticky base for the beans.  As you can see from the picture on the right, there was plenty of porky goodness studded throughout, including Toulouse sausages, and then there was the chunk of confit de canard in the middle.  I thought I’d died and gone to cassoulet heaven.  Both Nick and I manfully soldiered on through a pretty gigantic portion, but in the end it defeated us both (but only by a small margin!).  Although I am no expert, I have had a couple of cassoulets and this one was definitely the daddy. Astonishingly, after all that, I still felt I could face dessert.  Well, it would be churlish to turn down a Grand Marinier souffle, now wouldn’t it??  So what arrived was this perfect example on the left, absolutely soaring skyward in eggy wobbliness.  Wow.  And it was indeed light as a feather (and therefore obviously calorie free…!).  If I had any complaint, it would be that they had rather a light touch with the Grand Marinier bottle.  If a dish contains alcohol as a central ingredient, I am quite keen to be able to taste traces of it, and it was just not in evidence here.  But that aside, it was wonderful, washed down with a glass of French dessert wine (sadly not recorded).  I also noticed all around us that there were beautifully plated and interesting desserts – things in egg shells with french toast (kind of Heston Blumenthal-esque in its play on breakfast v dinner), so I suspect there is a lot more fun to be had with this menu outside of the traditional meal we had.

The service was attentive all night, although never intrusive.  It was also deliciously unhurried which is something I’ve come to value tremendously since comign to London.  And the price, considering the excellent food we’d had, was a ridiculour €35 per head.  Try getting that food and those portion sizes in London at that price.  Sadly, I do not have the bill and cannot tell you what the total came to, but it was in the region of €100 for two.  The verdict:  what a great find for hearty traditional food as well as more innovative dishes in a relaxed and classy setting – for utterly reasonable prices.